March 22 2013
50
Recently, articles, mostly, go about foreign weapon, it's time to restore the balance and take up domestic samples. And it’s probably worth starting with the Dart pistol, which was developed by the designers Stechkin, Balzer and Zinchenko, all the more so that they asked about this weapon to make an article in the comments under the material about gun Five-seveN. At once it must be said that the weapon is very rare, it was produced in very small batches and did not receive the spread in view of the low-power cartridge used in this gun. Nevertheless, the sample is very interesting, having its own unique features and quite suitable for it to be “reanimated” in our time, of course, by adapting it to more effective ammunition. But first things first, but let's start, as usual, with the ammunition for this weapon, since the 5,45x18 cartridge of the MPTs is not as well known as the others.

Probably the most important feature of the 5,45х18 cartridge is that it was developed by a woman. Do not think, I have nothing against women's participation in the arms business, but usually this is rare. However, at the beginning of 70-s, Antonina Dmitrievna Denisova began work on creating a small-caliber cartridge for a pistol that could compete with 9x17 and 9x18 in its characteristics, but it would be smaller, have less impact when fired and had more armor. The main idea of ​​the designer was that with a sufficient length of the bullet and its wrong balance, even with a small caliber, it will completely give its energy to the body of the enemy. In addition, it was assumed that the design of the bullet would contribute to the spreading of Kevlar fibers in body armor, and not tear them, which would provide the best armor-piercing qualities of this ammunition. In addition, the high ability to pierce armor was to provide the core of the bullet. In theory, everything looked fine, and in practice everything was partially confirmed. All but the stopping action. There do not throw tomatoes, for armor-piercing - the cartridge 5,45х18 really surpasses the regular cartridge of the Makarov pistol, so we can talk about the achievement of the set result. 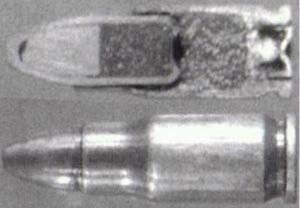 As a result of the work of Antonina Dmitrievna Denisova, a cartridge weighing 10,2 grams, well known to all by the small-sized PSM pistol, was born. There are two versions of the cartridge with a bullet weighing 2,4 grams and a bullet with a mass of 2,6 grams, while the initial speed of both variants of bullets when used in a PSM pistol is equal to 325 meters per second, respectively, the kinetic energy of these projectiles is ridiculous values ​​of 119 and 129 Joule. Interesting is the design of the bullet. In its nose part there is a steel core, and behind it is lead to increase the weight of the bullet. Thus, it turns out that the center of gravity of such a bullet is shifted back, which is not good, especially under the condition that the designer intended to increase the striking ability of the bullet due to its length. However, this is a pistol cartridge, so there is nothing wrong with that. On the contrary, such a balancing bullet contributes to somersaults already in the body of the enemy, and this is just very good, not for the enemy, of course. Since the steel core was located in front of the bullet, another problem arose in the form of ricochets. To get rid of it, it was necessary to cut off the nose of a bullet, which partially deprived the missile-projectile ricocheting ability, but had a negative effect on the armor-piercing. It was this kind of ammunition that was decided to be used in a new pistol. 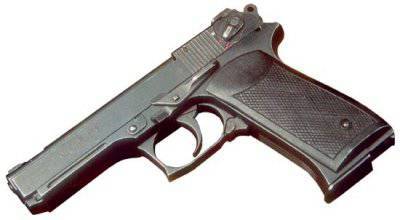 At the beginning of the 90-s of the last century, not the most successful idea to combat the means of individual armor in the form of hitting bullets at one point persistently advanced in the domestic arms business. Of course, this was impossible to do, however, even getting close, theoretically, the bullets hit the enemy for sure. The main idea was that the first bullet had to destroy personal protective equipment, and the second one should have hit the enemy in a cleared way. The designers who took up the creation of the OZ-23 pistol had a slightly different view on the use of this phenomenon. Thus, instead of armor-piercing, the main emphasis was placed on the fact that when the bullets hit each other, their stopping action could be summed up, which means that it was possible to create a sample of weapons with low recoil, but with very high efficiency. Well, armor-piercing, of course, was not superfluous, but in practice the theory worked through time, and even after three.

Thus, the initial vision of such weapons as a pistol with the possibility of automatic fire with a cut-off of small-caliber bullets was created. When you first look at the weapon, it becomes clear that the APS for this gun is a relative, albeit distant, so many similarities in the appearance of the weapon, but not the exterior paints the gun. A much more interesting moment was the implementation of the automatic operation of the pistol, with very low recoil, but with a very high combat potential. Despite the fact that the weapon has a rather serious appearance and weight, even a child can shoot from it, moreover, it can shoot with automatic fire, without a butt and with one hand. First of all, it is necessary to note the notch in the barrel, which plays the role of a recoil compensator and does not allow the barrel to pick up when firing. But this solves only one problem, since the movement of a rather massive casing-shutter is clearly not the most positive effect on the accuracy of the weapon, especially given the rate of fire of 1800 shots per minute. It was this problem that Stechkin solved, and he decided brilliantly simple. 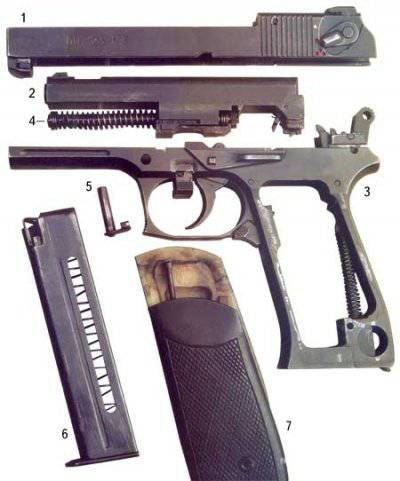 Automatic pistol built on a scheme with a free gate, but something in this simple mechanism has been modified. When fired, the powder gases tend to push the bullet out of the barrel, and the cartridge case from the chamber. Only the valve, spring-loaded with a return spring, interferes with the release of the sleeve. As a result of this, already after the bullet has left the barrel of the pistol, the bolt saves the received energy from the cartridge case and moves back. In the process of movement of the housing-bolt back removed the cartridge case and is thrown out of the design of the gun. And here miracles begin. The bolt enters into the grip and further moves with it, as a result of this the housing-bolt-barrel group suddenly loses speed due to the increased moving total mass. After reaching its extreme position, under the action of the return spring, everything returns to its place, simultaneously picking up a new cartridge from the store. It is precisely for such decisions and pride appears domestic gunsmiths.

The gun itself turned out to be relatively heavy - 850 grams without taking into account the cartridges. 24 things are put in cartridges in the store, that is, the weight of the weapon ready for use is slightly less than 1,1 kilograms. The length of the gun is 195 millimeters with a barrel length of 125 millimeters. On the right and left sides of the weapon, the fuse / fire switch is located on the casing-shutter. Automatic fire is carried out with a cut-off of the cartridge 3, that is, all the 24 cartridge go for 8 short bursts.

Unfortunately, it was not possible to personally get acquainted with the weapon, it was only possible to see how the other person controlled him. And you know, impressed. Particularly impressed by the fact that three shots merge into one and at the same time the weapon itself in the hands of the shooter remains almost motionless. The pistol did not receive a spread, as noted earlier, the reasons for this are only in the cartridge, which does not reach the extra characteristics even in such a perfect weapon and even in a company with two more cartridges. But, in my opinion, not to continue the further development of these weapons would be just a crime. In the end, there are sabotage bullets, there is foreign experience on similar ammunition, there are examples of use, and very good ones. In general, I really hope that this sample is not completely buried, and somewhere, after all, people are engaged in its resuscitation.