March 22 2013
32
The Ajax hypersonic aircraft concept in the domestic scientific community was spoken back in the 80s, and publicly began to be discussed in the 90s of the 6th century. It is worth noting that a person has always sought to move at the highest possible speed, and someday we will definitely fly at hypersonic speeds. Hypersound begins where the flight speed exceeds 8 Machs - a little more than 330 thousand km / h (Mach number is the speed of sound propagation in the air - 1100 m / s or 3 km / h). At present, supersonic aircraft, in particular combat fighters, can fly at a speed of more than 3,5 Mach (about 2 thousand km / h), while the Concord civilian aircraft produced XNUMX with a small Mach. It is logical that the next stage of development aviation should become hypersonic flights.


Today, hypersound is 2 problems. The first is to create the engine itself, which would provide the necessary energy to the device, and the second - thermal protection. When any apparatus flies in the dense layers of the earth's atmosphere at hypersonic speed, its skin is heated to very high temperatures due to friction. For this reason, the power plant, which should create the necessary driving impulse for an aircraft, needs sufficiently serious thermal protection. Today, this problem is planned to be solved as follows. It is planned to install a special passive thermal protection, a kind of heat insulating coating, similar to the one used on the domestic Buran or its predecessor - the American shuttle. Such protection simultaneously protects the shell of the aircraft and at the same time rejects heat from it.

In the USSR, at the end of the 80 of the last century, the concept of a fundamentally different hypersonic aircraft was proposed. The author of this concept was Vladimir Lvovich Freistadt, who in those years worked in the St. Petersburg NIPGS - Scientific Research Enterprise of hypersonic systems, which was part of the Leninets holding. Vladimir Freistadt proposed not to protect a hypersonic device moving with great speed from heat, but rather to let heat in to increase the energy resource of the device. According to the proposed concept, the Ajax hypersonic aircraft (GLA) was an open non-isolated aerothermodynamic system in which during the entire atmospheric flight a part of the kinetic energy of the flowing HVA hypersonic air flow would be assimilated by its onboard subsystems, transforming into electrical and chemical energy and increasing the overall life of the device . Such a project solved the global issue of cooling a hypersonic aircraft, as well as many other problems. The concept of the proposal in the Ajax project was revolutionary, it had a large coefficient of novelty, and therefore a great technical risk.

The highlight of the Soviet project "Ajax", which was originally created as a response to the US plans to create a hypersonic reconnaissance aircraft Aurora, and later transformed into a hypersonic long-range aircraft, or the first stage for launching a large payload into orbit completely different approach in which everything was the opposite. The heat from the Soviet apparatus was not rejected, it was planned to be used by launching it inside the power plant. Those parts of the aircraft that needed to be cooled and that overheat at high speeds were supposed to be surrounded by another shell. It turned out a kind of double hull, the cavity of which was supposed to be filled with a catalyst (various technologies were discussed) and it was planned to pass a mixture of kerosene and water through it. Instead of a heat-insulating solid layer on the "Ajax" it was planned to use a liquid jacket that would protect the power plant, with the fuel acting as a cooler.

But it was not the newest and most important. According to the developers, the most important was the fact that under the influence of high temperature - more than 1000 degrees Celsius - and the presence of a catalyst would endothermic catalytic reaction. That is, there would be a selection of heat from the outer shell of the aircraft, cooling the skin to those temperatures that modern science is able to cope with today.

In this case, the heat proposed to use for the operation of the power plant. The excess heat, which was formed on the catalyst from water with kerosene, tears radicals (long hydrocarbon chains of kerosene). As a result, methane and hydrogen were to be produced directly onboard the hypersonic aircraft. The fact is that you can design and build a supersonic combustion chamber only on the fuel that will contain hydrogen. However, it may be a mixture of hydrogen with kerosene, methane, or something else, but hydrogen must be present. Without hydrogen, simply do not build a combustion chamber for a hypersonic power plant. Thus, the task of removing excess heat on the Ajax was solved in such a way that it would generate such necessary hydrogen directly on board the aircraft, this was the main grain and the basis of all the concepts. 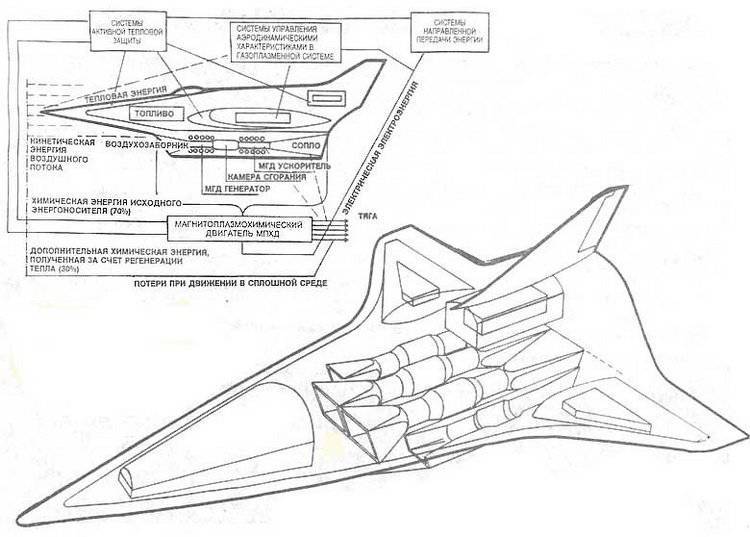 As a propulsion engine, it was planned to use a magneto-plasma-chemical engine, which included an MHD accelerator and a magnetogasdynamic generator. Due to the deceleration of the hypersonic flow by the magnetic field, optimal conditions were created for the combustion of the fuel in the supersonic combustion chamber. In addition, electricity was generated up to 100 MW. If necessary, increase the flight speed of the MHD accelerator could further accelerate the combustion products, which would allow the device to develop speed at the level of 25 maxims, as well as provide it with access to near-earth orbit.

It was assumed that the GLA will be able to overcome the distance to 20 thousand km., Without refueling at a speed higher than 10 thousand km / h, and also to rise to an altitude of 30-60 km. At the same time, having a sufficiently powerful on-board electric power, he could solve problems of a truly planetary scale. For example, to ensure the delivery of goods and people to any point on Earth, spending no more than 2 hours on it. Could be used for the implementation of environmental and meteorological watch over the surface of the Earth. It could also be used to assist spacecraft in near-earth orbits or ships in distress in the oceans.

Considering all this, it is worth noting that engineer Vladimir Freistadt was accused for a long time that he was working on creating a perpetual motion machine and that he had no scientific approach to work. It’s ridiculous to talk about it now, but in those years it really was about Freistadt violating the basic physical laws. As a result, only the commission headed by the Vice-President of the Academy of Sciences Velihov and which was established in 1987 year, was able to reach a verdict - the concept of “Ajax” is not a perpetual motion machine and does not violate physical laws. At the same time, it should be recognized that this kind of collisions quite often occurred in storiesespecially when creating completely new technologies. In this case, many now believe that this is the way to make a hypersonic engine. Thus, a beautiful idea proved its ability to exist. 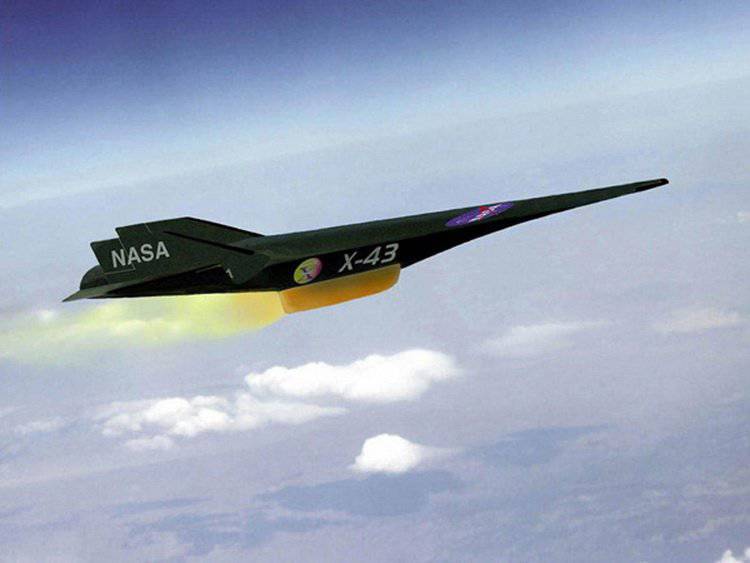 Tests of the American hypersonic aircraft X43A
It should be recognized that research in the field of hypersonic flights within the framework of the Ajax concept was fundamental to NIPGS. In particular, the principle of operation was proposed and the main components for a chemical heat recovery reactor with a catalyst were created, which was placed under the airframe design paneling. In addition, the problem of active energy interaction of the GLA with the airflow around it was solved. At the same time, calculations showed that at all speeds and flight modes, the temperature of the elements of the Ajax glider will not exceed 800-850 degrees Celsius. And during the tests that were carried out at TsAGI, it was found that the developed hydrocarbon fuel burns faster than just hydrogen.

As a result, by coincidence, at the moment Ajax repeats the fate of the Tu-144 or Buran. At the same time, Ajax was never embodied in the metal and the reason for this is the lack of funding. At the same time, the United States is actively working on the creation of hypersonic aircraft, which means that Russia may find itself in the role of catching up, spending billions of dollars on the development or copying of foreign products.

Ctrl Enter
Noticed oshЫbku Highlight text and press. Ctrl + Enter
We are
Ajax Hypersonic Multi-Purpose AircraftOn the way to hypersound
32 comments
Information
Dear reader, to leave comments on the publication, you must to register.