The eve of hell is a “paradise” of the Western type.

March 22 2013
338
Oz long refuses to accept travelers, but they seek an audience and demand the fulfillment of promises. Oz confesses that he is a deceiver who does not know how to conjure, but got here from Omaha, being blown away by a wind balloon. The city looks emerald only because all residents wear green glasses.
(Tale L.F. Bauma "The Amazing Wizard of Oz") 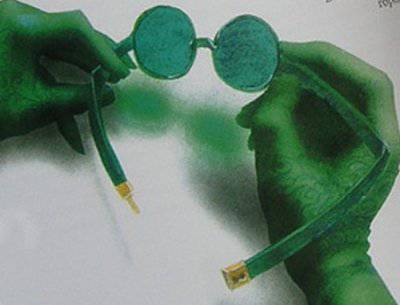 Recently my friend came from Germany, he went there with his son. The young man looked at the life of the Germans for a few days and asked his father: “Does it mean that they have the same behavior, or did we get at the wrong time and place?”

I will not list all that my friend told me, but the point is that being in Germany, and indeed in Europe, it became unpleasant and sometimes disgusting.

What happened? Is the crisis undermined the West so much that the Russians began to feel themselves behind the cordon not as “shovels” but as citizens of a great country? Or did the Western consumer society, having consumed everything that is possible and impossible, lost health, conscience and sanity, and this became evident to our tourists?

The old Russian saying “with a nice paradise and in a hut”, in most countries of the world today is interpreted as: “There will be a hut, there will be a darling, and we don’t need paradise”. By the way, in the English version, our saying sounds like: “Love in a cottage”, literally - love in a cottage. Western minds can no longer contain the word "hut", and "paradise" for them is sex, food and drink, but in an endless form.

To feel like a citizen of a great country, you just need to love your Motherland and do not necessarily compare Russia with other countries. Perhaps there is much to learn abroad, but before taking for a model zamylennye Western patterns, it is useful to know what today, in fact, is a "civilized" Europe.

In the bishopric of Hildesheim in Lower Saxony, it was decided to "reduce the church network" to "units" by 53. Originally wanted to 80 - but still agreed to reduce the number of closed houses of God by a third. In general, the Federal Republic of Germany is going to close another network of hundreds of temples, and not only Catholic, but also Lutheran. There is one formal reason - the number of believers in these denominations is reduced at a booming pace.

In Germany, sexual perversion has become the norm. There are virtually homosexuality as a normal form of sexual relations. The former mayor of Hamburg and Berlin Mayor - open homosexuals.

Most parents in Germany are not worried about their children having sex in 14-15 for years, but because they have no idea about contraception or sexually transmitted diseases. In the schools of Germany, the sexual education of children is practiced, where homosexuality is on a par with normal sexual relations.

Number of bulimia, ie overeating in Germany has reached a million. Obesity Growth in Germany has caused security problems in the local crematorium. Cremation of bodies is too large leads to uncontrolled fires in these institutions and increasing pollution.

In 2002, the Netherlands became the first country to legalize euthanasia. Since then, each year more than 3 thousand. People took advantage of this right. In the spring of 2012 years in the Netherlands started to work a special team headed by professional doktoromi that make euthanasia at home on call.

In the major cities of the Netherlands, such as Amsterdam, Rotterdam, The Hague, Utrecht and others, coffee shops have been opened that have official permission to sell marijuana, hallucinogenic mushrooms and other light drugs. The organization of licensed coffee shops was designed to protect soft drug users from addicts who are addicted to hard drugs. But workers at rehabilitation centers claim that more than 90% of the heroin users who have undergone treatment have developed their addiction, starting with regular smoking weed.

In 2011 on the Dutch channel BNN in a TV show titled "Proefkonijnen" the hosts Denis Storm and Valerio Zeno ate each other's meat. Before the transfer, they made an operation, during which they cut out a small piece of meat (muscle tissue), which, then, already in the transfer they prepared and ate.

Church parishes are also closed in Great Britain. And where believers recently turned to God, shopping centers and even bars are opening.

The Government of the United Kingdom supported the ban on British workers and employees for openly wearing crosses, justifying the dismissal for such an act. For that, this same government allowed to sell invented in Switzerland, children's condoms. In Britain, they also took care of the health of young girls. Oxfordshire students were given the opportunity ... to order emergency contraception via SMS messages. Tablets are given to girls by school nurses. Use such a modern service can schoolgirls who have reached 11 years. This program was developed by the local administration and the regional branch of the Foundation for First Aid.

In Norway, the level of morality has dropped below all possible limits. At the parades of sexual perverts there are children who hold in their hands banners promoting homosexuality and same-sex unions. Parades of sodomites in this country have become public, citywide holidays.

Bodies of juvenile justice fully control the behavior of parents and children. The main thesis of the authorities - the biological parents should no longer have priority in the education of their own children. Parents can be punished up to the withdrawal of the child even treat children with sweets. Number of sweet must be strictly controlled.

In Norway, it is forbidden by law to cry, tears are a sign of emotional instability. The tears of the mother of children who have lost their children due to juvenile justice will be proof in court that she is unstable or insane and will only aggravate the “guilt”.

In the Swedish capital, Stockholm, 90% of the dead are cremated, 45% of urns are not taken away by relatives. Overwhelmingly, the funeral takes place "without ceremony." Crematorium workers do not know whose remains are specifically burned, because the ballot boxes are only an identification number. For economic reasons, the energy received from the burned urns is optionally included in the heating of your own house or in the heating system of the city.

In 2010, in Sodermalm, a district of Stockholm, the staff of the institution replaced the children “he” and “she” in the appeal to the children, respectively “han” and “hon”, with the asexual word “hen”, which is not in the classical language , but there is in use in homosexuals. According to the Swedish Association for Sexual Equality (RFSL), in Sweden more than 40 thousand children have parents (or one parent) - homosexuals.

In 1998 in Sweden sensation was the exhibition of the photographer Elizabeth Olson, depicting Christ and his apostles homosexuals. The exhibition was very popular, of course, primarily among homosexuals. One of the places where it was held, was the chair of the Lutheran Church.

In 2003-2004 years after the speech of Pastor Oke Green, who in his sermon condemned homosexual relationships, calling them sinful. For "disrespect for the sexual minority" the pastor was convicted by the Court of First Instance for a month of imprisonment.

In 2009 was an open lesbian Eva Brunne was elected as bishop of the Diocese of Stockholm.

The juvenile system in Western Europe has become a punitive body that destroys families. For example, in Sweden, on average 12 thousand children are taken away from parents every year from their parents. The pretext can be “mistakes in education”, “mental retardation of parents” and even “excessive care”.

Since 1979 years here there is an absolute ban on corporal punishment of children. Parents can not give the child away with a slap, pull the ear or raise it voice. For the punishment of the child threatens to 10 years in prison. Even kindergarten children are in detail informed about their rights and the need to inform the police about such incidents. And they use it. It takes the side of the child in conflict of interest between the interest of the child and the parent state.

In Denmark, along with the usual brothels, where anyone can satisfy their sexual fantasies, there are brothels allowed, where people pay for sex with horses and other animals.

This type of service is also widespread in countries such as Norway, Germany, Holland and Sweden. Until then, until there is any excesses, and while neither people nor animals will not be harmed, these governments will not impose a ban on the provision of such services ...

Rev. Anthony the Great said: "The time will come when people will go mad, and if they see someone who is not mad, they will stand up against him and say:" You are mad, "because he is not like them."

Hell - is the absence of love. Then, how to call those places, cities and countries where people fired with their housing ashes of relatives of the temples make brothels legalized sexual perversion and take away children from their parents?

The spiritual degradation of Western society is the result of the abdication of people from God and their conversion to idols with the names “wealth”, “lust” and “well-being”.

Today in Russia we are trying to impose various forms of insanity, which have long been considered the norm in Western countries. But our country remains great precisely because we can not accept the obvious evil as the norm. We can not call sin righteousness, even if sin is legal. Those who do so in our country, either agents or traitors, or forgot to remove the "green glasses" bought in 90-x on sale somewhere on the outskirts of Finland.

Ctrl Enter
Noticed a mistake Highlight text and press. Ctrl + Enter
We are
A great interview with Sergey Lavrov: about Ukraine, Obama and IranWhat you didn't want to know about England
338 comments
Information
Dear reader, to leave comments on the publication, you must to register.