March 22 2013
87
Tensions between North Korea and South Korea are sharpening, growing, lengthening and widening. Expanded to the point that a young and energetic atomic leader swung at the American bases in Okinawa. These are, of course, words, and as a deed, Kim Jong-un proposed to the world community military maneuvers using UAVs equipped with high-precision weapons, and air defense system, in which he took part himself. It is quite possible that all this is just another bluff. 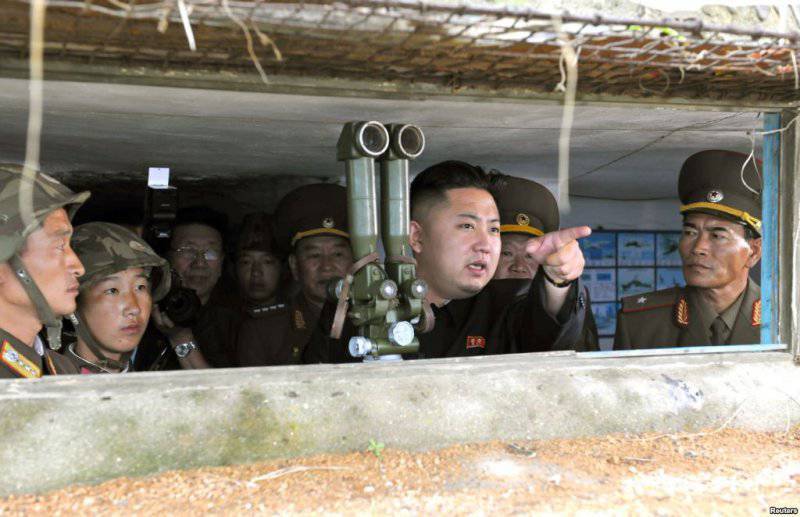 20 in March, Kim Jong-un, guided military maneuvers involving unmanned aerial vehicles and anti-aircraft missile systems designed to destroy cruise missiles. The first secretary of the Workers' Party of Korea was satisfied with the exercises. Praising the military he ordered they "retain increased combat readiness and the ability at any time to deliver high-precision strikes against enemy positions." It seems that Kim Jong-un is seriously going to fight. He stated that “the time of words is in the past,” and then stressed the need to “mercilessly destroy enemies to the last man.”

Once the last words are heard, after which affairs are about to follow, the question is pertinent: who are the enemies? Kim explained this.

He is ready to order the destruction of South Korean military facilities and government buildings. So, enemy number one is South Korea. At the same time, the leader of the North Korean communists will strike the US bases on operational routes in the Pacific Ocean. Enemy number two is USA. Well, and then the enemy number three - Japan, an American ally. The latter Kim Jong-un clarified: the KPA fighters, in his words, "will strike at military targets in those countries that are preparing for an invasion of the DPRK along with the United States." That is, all those who stand shoulder to shoulder with the American occupiers, do not be good. To everyone, not just Japan or South Korea, which it’s time to reunite with North Korea, in order to end the shameful exploitation of workers at Samsung’s factories. This is Kim Jong-un's childhood dream. Hence the very last words - already, apparently, before the battle: the leader of the DPRK called upon the soldiers and officers of the KPA to maintain high vigilance and wait for the order "about the beginning of a great offensive with the goal of reuniting the motherland."

March 21 theme of a strike on US bases was voiced by the North Koreans with a new force. From the leader, his subordinates adopted the ominous rhetoric.

Some unnamed representative of the Supreme Military Command of the DPRK said: “The US should not forget that their Andersen military base on Guam, from which the B-52 bombers are launched, as well as the naval bases on Okinawa, are in the affected area of ​​our high-precision weapons systems.”

Moreover, in 09: 32 local time (04: 32 Moscow), the armed forces of the DPRK announced the air alarm. In South Korea, they suggested that the signal was given as part of the maneuvers, but the northern authorities refused to comment on the reasons for the alarm.

Vladimir Skosyrev ("Independent newspaper") reported that on March 20 Russian-American consultations on the North Korean nuclear issue were held in Moscow. The unnamed State Department official taught the Russian side a little bit of life: The United States values ​​the position of the Russian Federation, he explained, but they want the Russians to be more active in enforcing the decisions of the UN Security Council. North Korea should be forced to abandon the creation of nuclear missiles.

On the eve of the next round of Russian-American consultations, the diplomat warned that Pyongyang wanted to split the countries participating in the negotiations. Therefore, all these states must act jointly.

In an interview with an American who wished to preserve anonymity, the NG correspondent noticed that the diplomats from the DPRK, who had recently visited the editorial office, called nuclear weapons the only means of protection against an American attack. In that case, why would Washington not give Pyongyang a guarantee of non-aggression - in exchange for abandoning the nuclear program?

The representative of the State Department replied that such guarantees of the DPRK had already been given. North Korea recently abandoned the armistice agreement signed in 1953. (It must be added here that along with this, the DPRK refused to agree on the denuclearization of the peninsula).

The American diplomat said that the US approach includes not only strengthening the sanctions, but also negotiations. It is worth Pyongyang to change the behavior, as America takes a step towards him: will provide economic assistance. This is the flexibility that American diplomacy has shown in relation to Myanmar (Burma).

As for the power of the North Korean nuclear potential, there seems to be more bluffing than truth. No wonder the senior vice president of the PIR Center, Lieutenant-General of the Reserve Yevgeny Buzhinsky notes that there are no nuclear weapons in North Korea ... no.

Expert believes: “The distance between a nuclear device and a warhead, a bomb or an artillery shell is large. My personal opinion is that Koreans do not have nuclear weapons. They have enrichment technology, a military program. But so far they have not demonstrated anything ... The launch of a satellite into orbit and a long-range rocket, which is launched along a ballistic trajectory, are two different things. In 2005, they launched a rocket that flew over the Japanese islands, frightened the whole world, tried to repeat the launch three times, but they did not succeed. Therefore, to say that North Korea has done something successfully, I would not. ”

Presumably, the extremely aggressive rhetoric of Kim Jong-un has two bases: not to mention the “unkind tradition” of the northern side to broadcast the unification of the two Koreas and call the government of the Republic of Kazakhstan “puppet”.

First, the annual joint exercises of South Korea and the United States (“Key Resolve”) took place from 11 to 21 in March, and the North Korean leaders do not like such exercises.

Secondly, in February, the UN Security Council strengthened the sanctions against North Korea in response to an underground nuclear test (recorded by various observers). The February Security Council resolution consists of many points: here and the possibility of freezing bank accounts, and inspection of aircraft and ships, and the search of diplomats (the reason for which may be suspicion of carrying large sums of cash intended for the development of nuclear and missile programs).

America today holds two sanctions "anti-nuclear" scenarios: against the DPRK and against Iran. (At the same time, the “anti-chemical” scenario against Syria is being worked out. And behind the “spent” scenario on Iraq). And it looks that it turns out. Nothing yet. Solid failures against the backdrop of the economic crisis. Kim Jong-un is becoming more aggressive and, as they say, is in close contact with the President of the Islamic Republic of Iran Ahmadinejad. The latter has learned, with Eastern cunning and ingenuity, to bypass American and European sanctions, and now it flaunts it, in particular, in the Pakistani direction, where the ambitious gas business has been launched.

Against the background of the understandable intransigence of North Korea and Iran (fear of “scenarios” from NATO), US foreign policy looks, excuse me, not only inflexible, but also stupid. Last year, Obama said about "flexibility" to Comrade Medvedev: they say, after the elections, I will have more flexibility. Obama's words were picked up by the included microphone, and they are still quoted by the general public. It's time to show this flexibility, Mr. Obama. How to manifest? Read election program blue-eyed merlin miller. She is not outdated.

Observed and commented on Oleg Chuvakin
- especially for topwar.ru
Ctrl Enter
Noticed oshЫbku Highlight text and press. Ctrl + Enter
We are
100 Thousands of military personnel are brought into combat readiness in the Far EastResults of the week. “I recently believe that everything in life is possible, even that which is impossible”
Military Reviewin Yandex News
Military Reviewin Google News