Sergei Shoigu does not want to stand behind the price. Minister of Defense asks to save him from money issues 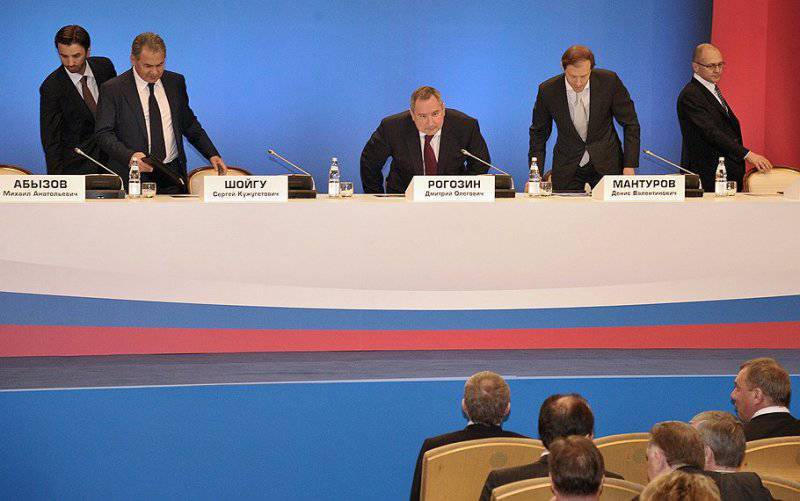 Yesterday, at a plenary meeting of the military-industrial conference held in the government, Defense Minister Sergei Shoigu emotionally asked his department to be set free from questions of pricing and repair of armaments. Present at the conference, Prime Minister Dmitry Medvedev did not respond to the request, at least publicly, and Deputy Prime Minister Dmitry Rogozin after the event promised to “decide on the department”, which will oversee the price of weapon. The details from the White House - correspondent "Kommersant" Ivan Safronov.


On the conference agenda, Sergei Shoigu was listed as co-rapporteur to Mr. Rogozin. However, on the eve of the opening plan, according to "Kommersant", was revised. The Deputy Minister of Armaments, Yuri Borisov, was to speak from the Ministry of Defense. But immediately after his speech, where he spoke about the decline in the quality of weapons and equipment supplied to the troops, as well as the fact that the scientific and technical reserve had been practically exhausted in the defense complex, Mr. Shoigu approached the microphone.

“I cannot be silent,” the minister said, and after an almost theatrical pause, he continued: “It’s important to solve two important tasks in the Ministry of Defense. Free us from functions that are not intrinsic to us — by entering into life cycle contracts, by taking over the repair of all the equipment in the arsenal. Take away all 300 factories, 37 thousand. locksmiths and turners, take along with the repair and along with the money! " He looked around the audience, trying to find understanding among the conference participants, but he saw only the tense faces of the defense industry representatives. “When we say“ assume the function of pricing, ”then who should do this?!” The minister continued with pressure. “We have the Ministry of Economy, the Ministry of Industry and Commerce, and other structures. You tell us:“ Do pricing. ”But Say this, realizing that we are not in a position to do this qualitatively, but in all the newspapers you say: "Here they are delaying". However, General Shoigu noted, when the Defense Ministry “doesn’t delay,” neither the military nor industrial enterprises are satisfied with the price. “Give us the weapons on which we will fight,” Sergey Shoigu asked. “The weapons on which we will teach our young officers to fight in the future.”

Emotions of the Minister sources "Kommersant" in the military department explained at once by several circumstances. The first is that Mr. Shoigu’s desire to withdraw from the subordination of the structures of Oboronservis OJSC (in particular, Aviaremont OJSC and Remvooruzhenie OJSC) enterprises to repair weapons and military equipment as soon as possible. “After becoming acquainted with the internal document flow of the holding, questions arose not only about inflated prices for repairs, but also about the technical condition of the enterprises themselves,” says the Kommersant source in the Defense Ministry. “It will take not only a lot of time to restore them, but also money, which can be spent much more rationally. " According to him, the fate of a number of military repair enterprises has already been decided de facto: by the beginning of 2014, the military plans to transfer to the United Aircraft Building Corporation about seven aircraft repair facilities, and the Uralvagonzavod corporation - six armored plants. “We expected this question to be closed by the end of the year, but due to bureaucratic procedures, this will not be completely possible,” the source told Kommersant, adding that the negotiation process is rather difficult.

The second circumstance, according to "Kommersant", was related to the results of the adjustment of the state defense order, conducted after the arrival of Sergei Shoigu in the Ministry of Defense. “As a result, it became clear that disputes over prices with the defense industry disrupt all the deliveries of products recorded in the state armament program,” the Kommersant source told the Defense Ministry. “At the first closed meeting on armaments, the minister suggested removing the military from pricing the product. he is trying to put this into practice. "

The first steps will be made soon. According to "Kommersant", most of the powers will deprive the Department of the Ministry of Defense for the pricing of military products. He is headed by Alla Yashina, a colleague of the ex-minister of Anatoly Serdyukov (they are familiar with the work in the tax authorities). Largely because of its tough stance on the price of products, the military and industry in 2011 and 2012 entered into contracts at the very last moment. And the largest - and with the participation of President Vladimir Putin (see "Kommersant" from 28 May 2012). “It is assumed that the department will work only as a consulting body that does not have the right to influence the negotiations,” the source told Kommersant. . Under Anatolia Serdyukov, this was considered impossible: the creation of military repair plants, working on outsourcing, and price wars with defense enterprises, followed by victory in them, he equated to personal achievements.

In response, Mr. Rogozin said (after the end of the conference) that "if the Ministry of Defense repels the topic of pricing from itself and does not want to do this, then it should repel those funds that are in the accounts of the Ministry of Defense." The Vice Prime Minister expects that by July the government will adopt a decree on the new pricing system and decide on the department that will oversee it.

Ctrl Enter
Noticed a mistake Highlight text and press. Ctrl + Enter
We are
Russia moves to the production of its own matrix for the manufacture of thermal imagersRogozin visited Nizhny Tagil, shot from a tank and a gun
107 comments
Ad