UN Conference on the Arms Trade: Collusion of the West against Russia 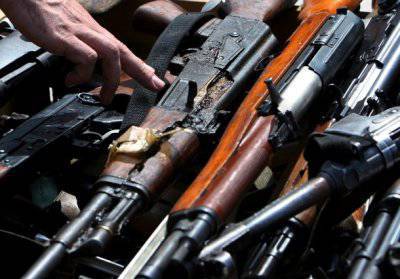 March 18 has begun and the United Nations Conference on Trade will continue until March 28. weapons. About two thousand diplomats representing one hundred and ninety-three countries gathered at the UN headquarters in New York to once again try to draw up an international arms trade treaty (ATT). A similar attempt failed in July 2012 of the year, but negotiators do not lose hope.


In the draft of the July Treaty remained too many tears to prevent the use of weapons against civilians. According to the United Nations, in 2010, almost 27,5 million people. in the world were refugees because of conflict. The reason, according to the UN, is the unregulated proliferation of weapons.

On the eve of the forum, the Secretary General of the World Organization, Ban Ki-moon, made a statement in which he expressed hope that the participants in the conference would resolve their differences and show "political will." He said: “Our common responsibility is to put an end to the inadequate order of the global trade in conventional weapons - from small arms to tanks and combat aircraft. ”

However, representatives of the National Rifle Association of the USA (NSA), which is notorious for its lobbying efforts, are quite aggressive in advocating for American constitutional rights to personal weapons (the famous Second Amendment of 1791) are going to enter into disputes with diplomats.

Representatives of the NSA have already won inside the country: “assault weapons”, which were banned by Democratic senators headed by Dian Feinstein (the Nobel peacemaker Obama promised to support the prohibition), will continue to be sold in the country. US senators have completely eliminated the clause on a nationwide ban on the sale of these weapons from the bill before the House. This decision was made head of the democratic majority of the Senate, Harry Reid. is he referred that when voting in a chamber a bill with the ban included in it will not gain the required sixty votes. Such an outcome can be considered a victory for the arms lobby.

Those rifles that Dianne Feinstein classified as “assault”, and those stores that fit her definition of “increased capacity”, will continue to be sold in US gun stores. Obviously, the senators will later consider some restrictive measures, but it is quite possible that they will be rejected with reference to the Second Amendment.

At the UN conference, Western countries are unlikely to delve into the intricacies of the arms trade. Washington will insist that a treaty that violates the notorious amendment to the constitution is unacceptable. Business, nothing personal. On a contract deviating from such a question, the White House will put a cross. The example of Australia from 1996 year (prohibition of private arms trade, the redemption of weapons from the population and the serious tightening of the rules for the sale of weapons) American deathtruders do not care at all and do not even care.

It also appears that the West is using the rostrum of the conference to promote its beautiful ideas of humanism and the protection of human rights throughout the world. It is known that we will focus on the sale of Russian weapons to Syria. Western countries want to achieve the inclusion in the treaty of a ban on the supply of arms that can be used to "suppress human rights", including under previously concluded contracts. And then it turns out: you can supply weapons to the rebels, because they are fighting against the tyrant, but you cannot supply weapons to Assad’s army, because Assad is the tyrant against whom you must fight in every possible way, lethal and non-lethal. The date of the conference is very convenient: 22 and 23 of March will be the meeting of EU foreign ministers in Dublin, where Britain and France will again raise the issue of arming Syrian rebels. It is also worth noting that the two named states are among the initiators of the ATT. Everything fits together wonderfully.

The goal of the current United Nations conference is to draft a legally binding agreement to curb the illicit trade in conventional weapons: from small arms to tanks and combat aircraft. UN Secretary-General Ban Ki-moon said: “The trade in conventional weapons involves many complex issues of business, national security, human rights, humanitarian law and politics in general. This is undoubtedly a difficult issue. ” According to him, the absence of international rules governing the arms trade is inexplicable. The Secretary General stressed: “We have international standards that regulate everything - from the sale of T-shirts to the sale of toys and tomatoes. There are common standards for trade in furniture. This means that there are standards for the sale of seats, but there are no standards for the global arms trade. ” He added that many families and communities have to pay a very high price for this gap in international law. “As a result of armed violence, more than half a million people die every year, including 66 thousands of women and girls,” said Ban Ki-moon. He added that non-state groups are increasing their arsenals. Other drug cartels in Latin America have more weapons than armies of entire countries.

As for Russia, it is in the strict framework of the ATT proposes to allow the supply of arms only to state structures (in other words, to ban the sale of arms to non-state actors). What does this mean? For example, the fact that the parties to the agreement subscribe to a text that will further protect the legitimate authority of any country from riots and insurrections, such as those who took place in 2011 in Libya and are now taking place in distressful Syria. The Americans, British and French will not, of course, sign a text with a similar provision.

Russia's position is as follows, writes Nikita Sorokin ("Voice of Russia") that in the current edition of the MTDO is not able to prevent the acquisition of weapons by extremists. Such an agreement will only harm legal trade and will infringe upon the state’s right to self-defense. As the expert of the Center for Analysis of Strategies and Technologies Sergey Denisentsev explained, disputes are caused by the inclusion in the jurisdiction of the contract not only the supply of ready-made weapons systems, but also such services as intermediary activities and the organization of licensed production. Denisentsev says:

“The decisive factor in not accepting the treaty last year was the position of the United States. In the United States, the position of various organizations, such as the National Rifle Association, the Organization of Small Arms, caused a very large opposition to the treaty. And in the Obama administration in order not to escalate their constituencies before the presidential elections, they decided to postpone the signing of the treaty until 2013.

Now, after the victory, the Obama administration can afford to return to the discussion of this treaty. With very large concessions both in the interests of the leading exporting countries and of the importing countries, the agreement can be accepted. ”

If the contract is signed, it will be almost impossible to fulfill it, says Ivan Konovalov, director of the Center for Strategic Conjuncture:

“Because all the main actors in the global arms trade have completely different views on how to do this. In addition, the treaty creates the highest possible standards for controlling arms trafficking, which is unacceptable neither for the United States, nor for Russia, and especially not for China, not to mention other countries. The document initially laid the contradictions. When the previous discussion was conducted, it was primarily said that weapons should not fall into those countries where human rights are violated. But everyone has different views on this situation, take at least Syria. The West believes that human rights are being violated there, in Russia they believe that this is a revolt against the lawfully elected government; and how to determine in such a situation, who has the right to receive weapons? "

This is not to mention the fact that there are “gray” zones in the arms market, comrade Konovalov notes. Most of the "multi-way transactions" participants are not disclosed. In the future, they will see no reason to change anything here.

The result is that the West is really seeking to turn an international treaty limiting illicit arms trafficking into an instrument of pressure on geopolitical opponents. Above, the article gives an example of Russia and the United States, a non-coinciding conflict interest for which is Syria today.

The other day the report of the Stockholm International Peace Research Institute was published, in which data entered on the supply of the main types of conventional weapons and military equipment in the period from 2008 to 2012. The top five largest arms suppliers, as before, are the United States (30% in the share of global arms exports), followed by Russia (26%), then Germany (7%), France (6%) and China (5%). The volume of international shipments of the main types of conventional weapons, despite the crisis of the eurozone countries, increased during the period from 2008 to 2012 by 17% compared to the previous five-year period (2003-2007).

As Sergey Vasilenkov rightly observes (Pravda.ru), the income received by many powers in the field of military exports plays an important role in the formation of their state budget. Financial and political interest contributes to the violation by states of existing international norms regulating the circulation of weapons. The implementation of the ATT, discussed today at the UN, will make the market for the import and export of armaments transparent. The signatories, the UN member states, undertake to annually provide information on the type and quantity of weapons units sold, as well as their customers. Violation by the parties to an agreement of its conditions will entail the application of international sanctions.

In this case, delivery London’s weapons worth twenty million pounds to the Syrian opposition, which is reported by the media around the world, would have to be “held” as part of the recognition of rebel groups as “state structure” (according to the Russian proposal, weapons can be supplied only to government agencies). Obviously, the West will push through its version of the ATT, aimed at infringing weapons-trading, and at the same time the political interests of Russia around the world. The fact that in the West for political convenience is declared "legal" and "democratic" in the East is somehow considered terrorist and extremist. Without quotes.

And then, 26% of the global arms market is a bit too much for Russia. Do not find Russia is already on the heels of the States with their thirty percent.

Observed and commented on Oleg Chuvakin
- especially for topwar.ru
Ctrl Enter
Noticed a mistake Highlight text and press. Ctrl + Enter
We are
International Arms Trade Treaty: a blank document or a draft against Russia?Engineering Technologies-2012. The first days of the forum
58 comments
Information
Dear reader, to leave comments on the publication, you must to register.