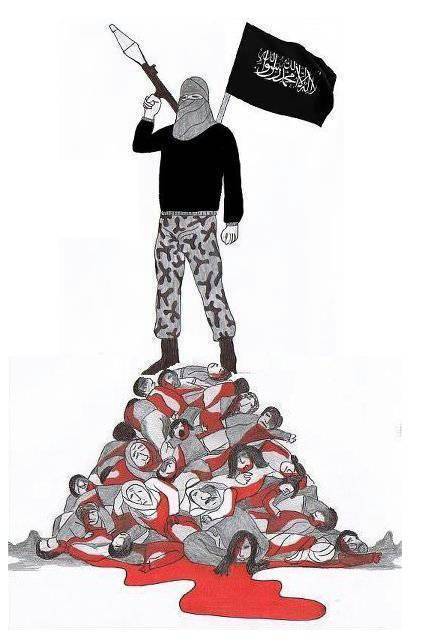 ... And again - the tragic March anniversary. 19 March 2011 of the year - the beginning of the NATO military operation called "Odyssey - Dawn" against the Libyan Jamahiriya, which turned into a blood-stained sunset ... 20 March 2003 - an attack of the USA and Great Britain on Iraq that claimed hundreds of thousands of lives. 24 March 1999 - Operation Merciful Angel - the inhuman bombardments of Yugoslavia, which killed thousands of people and destroyed the country's industry and infrastructure. March continues to be bloody again and bear new victims. This time in Syria.


March 19 bandits used a chemical warhead weapons in the city of Aleppo in the Khan Al-Asal district against civilians. The shelling occurred on the part of the Kafr Dail area of ​​Aleppo Province, occupied by terrorists.

So one of the districts was severely damaged, the inhabitants of which are actively participating in demonstrations in support of the Syrian army. The death toll has reached 25 people. More than 80 people suffered. Among the victims are many children. Hospitals are overcrowded. Patients have difficulty breathing. Eyewitnesses from the area say that chlorine is smelling everywhere.

A few months ago, a video was distributed online, in which Syrian "oppositionists" conduct experiments with chemicals in Turkey. Experimental rabbits die in the video, and the “rebel” threatens that people in cities whose residents support the government will also die in the same way.

Then the Syrian government sounded the alarm. The SAR MFA sent two letters to the UN Secretary-General and the Chairman of the UN Security Council expressing the fear that provocation by the militants against the civilian population is possible. It was also pointed out that the militants seized a chlorine plant in the province of Aleppo. Shortly before the seizure, the Syrian government asked UN observers (while the mission was still working in the country) to inspect the plant, but such inspectorates were prevented by terrorists who had fired at a convoy of UN personnel as they approached the plant.

However, in response to the letters from the Syrian leadership, the UN was silent. It is inconvenient, you see, to recognize that on the side of the "opposition" there are boundless people capable of everything. And the result is the death and torment of innocent people ...

The Russian Foreign Ministry responded to the alarming message, condemning the use of chemical weapons by terrorists. “They are extremely seriously concerned about the fact that weapons of mass destruction fall into the hands of militants, which further aggravates the situation in the SAR and brings confrontation in this country to a new level. We once again urge all sensible forces in Syria to renounce violence and move on to real steps towards a political settlement at the negotiating table, as provided for in the Geneva communique, ”the Russian Foreign Ministry’s press and information department comments.

As for the United States, they, of course, whitewash their puppets. White House spokesman Jay Carney said at a special briefing that the United States does not have any evidence that the Syrian opposition used chemical weapons.

At the same time, Carney could not resist the attacks on the side of the legitimate leadership of Syria and said that he was afraid of the use of chemical weapons by President Bashar Al-Assad. Once again, there were threats to a sovereign state. The United States does not even try to find the truth - they have already riveted their own truth in their offices, according to which there is a “good” opposition and a “bad” government. And then - "and the court, and the truth - all keep quiet!"
At the same time, another provocation occurred - the media spread the information that Syria had inflicted air strikes on the territory of Lebanon to eliminate the militant camps. Allegedly, the Khirba-Utin and Wadi Heil border areas with Syria were bombarded.

A few days ago, the Syrian Foreign Ministry appealed to the Lebanese authorities with a request to strengthen the security of the Lebanese-Syrian border, through which militants are constantly trying to penetrate the territory of the SAR. Through the same border smuggling weapons penetrate into Syria, which falls into the hands of terrorists. This appeal was the reason for the misinformation.

However, the Syrian Ministry of Foreign Affairs categorically denied these rumors. “Syria respects the sovereignty of Lebanon and is committed to maintaining stability in this fraternal country,” the spokesman said.

The same United States does not disdain to send bombers thousands of kilometers away from its territory under the pretext of "fighting terrorism". But how did they catch the misinformation spread by the media to use it again against Syria! Even if it were, it would be interesting to see how the United States and NATO countries would react to the immediate threat of terrorism near their borders!

And on the same day, the so-called Syrian “opposition”, sitting in Istanbul, created a puppet pseudo-government, electing him as the chairman of a certain Hasan Hitto, who worked in the United States for 25 years! What can be said about the legitimacy of such a “transitional government” if it was elected only by representatives of the coalition created in Qatar at the behest of Clinton? It does not represent not only Syrian citizens, but even the Syrian opposition, because no one asked the opinions of those opposition forces that are not part of the “Qatari coalition.”

At the same time, calls for armed aggression by NATO against Syria have intensified. One of the most ardent supporters of such intervention was the former British Prime Minister Tony Blair, known as the hangman of Yugoslavia and Iraq. He stated in an interview with the BBC that “Western countries can pay a heavy price if they do not intervene in the conflict in Syria.” What is the price if it outweighs the billions that Blair wants to threaten in a new bloody war?

The interview was given on the occasion of the tenth anniversary of the attack on Iraq. Blair said that the decision to send troops to Iraq was difficult in his career, but he believes it is correct. I wonder if the bloody boys dream of the ex-premier? He does not even want to imagine what hundreds of thousands of dead people are. They are not people for him, but the natives of a foreign state, which was decided to occupy.

Many pro-Western media have already recognized that the reason for the aggression against Iraq was falsified: the Iraqi leadership had no weapons of mass destruction. Even American intelligence confirmed this. At the same time, none of the officials of the United States and Britain dared to recognize the bloodbath in Iraq as a mistake! They understand that this is not a mistake, but a crime, but with the persistence of recidivists they want to commit more and more new crimes of this kind.

But if it was necessary to liquidate the legitimate leadership of Iraq, then he was unfoundedly accused of using weapons of mass destruction. If it is necessary to support the Syrian puppet "opposition", then the facts of its use of chemical weapons against the civilians of Aleppo are completely ignored. Call yourself a fighter for democracy — and grass people, even with gas, or something else! In the eyes of the world community, you will still be a “warrior of freedom” deserving support ...

Could it be that the bloody march, which in Aleppo smells like chlorine and brought dozens more corpses, is ready to present a new tragic date?

Ctrl Enter
Noticed oshЫbku Highlight text and press. Ctrl + Enter
We are
Judgment in Tripoli. Saif al-Islam Gaddafi sentenced to deathArmored vehicles of Yugoslavia. Part of 6. Wars in the ruins. Bosnia and Herzegovina. Kosovo. Macedonia
82 comments
Information
Dear reader, to leave comments on the publication, you must to register.