March 21 2013
34
In connection with continuous strengthening fleet NATO, as well as the possibility of war, the Soviet command decided to turn its attention to the construction of mini-submarines that would be able to operate in rivers, in shallow water, in the territory of the enemy fleet bases. To implement these goals, the naval leadership instructed the Leningrad Design Bureau "Malachite" to design a mini-submarine. The boat being developed received the designation Project 865 and the code “Piranha”. Subsequently, 2 submarines of this type were created in Leningrad - this is the MS-520 experimental boat and the MS-521 series lead boat. In total, only 2 boats were built, both of them were in service from 1990 to 1999.


For many years, ultra-small and small submarines were not built or designed by domestic industry. Their design was resumed only in the 70s of the last century. Since 1973, the Malachite design bureau has begun work on the submarine 865 Pr. Piranha. The main designers of the boat were Yu. K. Mineev, S. M. Bavilin, L. V. Chernopyatov. The small submarine was designed to carry out special missions in shallow, coastal and navigation-difficult areas in which conventional submarine operations were either impossible or seriously difficult, including in conditions of serious anti-submarine defense. 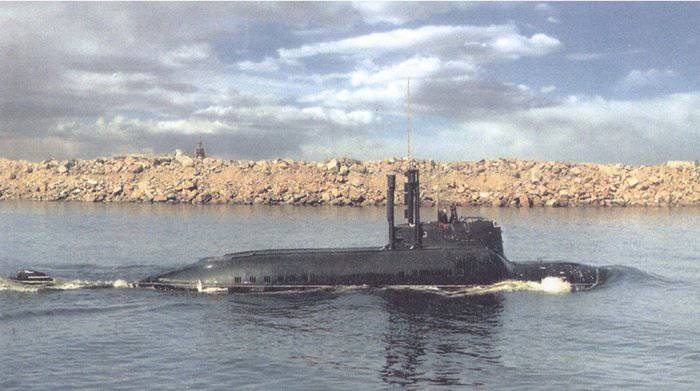 Initially, L. V. Chernopyatov was the chief designer of the project, but in 1984, he was replaced by Yu. K. Mineev. The chief observer for this project from the Soviet Navy was AE Mikhailovsky, captain of the 2 rank. The experience of creating and designing such technical tools at that time was absent in the country. For this reason, we had to work almost from scratch. At the same time, the novelty of the task set before the designers and engineers led to the implementation of a very large number of model and field tests of the boat, experimental work, and conducting various experiments on individual structural elements, technological processes and devices. For this reason, the laying of the first, experienced submarine of the 865 project occurred only in July of the 1984 year in the Leningrad Admiralty Association.

To accomplish the tasks assigned to them, the Piranha submarines were equipped with a specialized diving complex, which included 2 outboard sealed automated containers (diameter 0,62 m, length 12 m) intended for the storage of individual means of movement of divers and diving equipment and a dry cell sluicing for the release of saboteur divers into the sea underwater. In addition, there was an 2 outboard permeable device (diameter 537 mm). The Piranha submarines were equipped with modern electronic armament systems, including small-sized navigation, communications and surveillance (radar and sonar) and an automated control system, which made it possible to reduce the crew size to a minimum (total 3 man).

The armament complex was located in the middle part of the boat's superstructure and consisted of 2's cargo containers in which 2 transporters of the Sirena-UME type or 4 of the Proton type tug could be located. In addition, there were 2 mine-laying devices in which PMT mines were located (up to 4 high-power mines, nuclear warheads could be used), or 2 grids for the Latush 400-mm torpedoes that were used throughout the entire depth of immersion by the “self-escape”. For unloading, loading, as well as mounting diving equipment on the boat had a retractable tray. The controls and drives of the tray were located inside the robust hull of a mini submarine. The mine-laying device was a starting permeable grill with guide tracks of a pneumomechanical ejector, which ensured the ejection of mines in the course of the submarine's movement — forward. According to the second option, torpedoes could be used instead of mines. 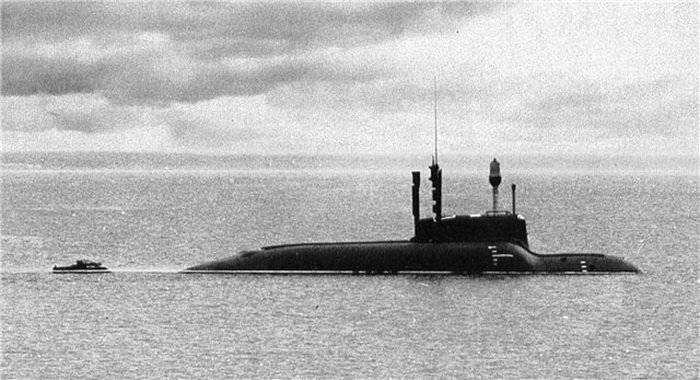 In addition to a variety of special equipment and weapons, the submarine had increased secrecy. This was achieved through the use of a non-magnetic case, low-noise mechanisms, perfect acoustic protection and the use of a diesel-electric power plant with full electric propulsion. The boat used a diesel generator with a power of 160 kW, as well as a low-speed all-mode main electric motor with a power of 60 kW. On the 865 boat, a lead-acid rechargeable battery with a total capacity of 1200 kW-hours or a silver-zinc battery with twice the capacity could be used.

The super-small submarine, pr. 865, had a displacement of 319 tons in a submerged position, and in a surface displacement - 218 tons. The dimensions of the boat were meter 28,2x4,7x5,1. At the same time the boat was a double-hull (light and durable hull), had a developed superstructure and one shaft. In order to provide increased controllability and maneuverability of the boat, a propulsion unit with a propeller screw in the swivel nozzle was mounted on the short course on it.

In the central post of the mini-submarine there was an operator’s console, information display devices and an instrument rack, and controls for the main devices and systems. The instrumental complex of the boat included sonar communications, sonar, radar and other devices. Under the floor of the deck of the central post (CPU) was a battery hole. Closer to the nose from the operator’s console there was a mine of a retractable radar complex, a periscope and an access hatch. The spherical bulkhead limiting the CPU had an entrance hatch in the airlock, which could also be used for decompression. On the bulkhead there was a gateway to transfer items from the CPU to the camera and the porthole to monitor the divers. The controls of the diving locking system were also located here. 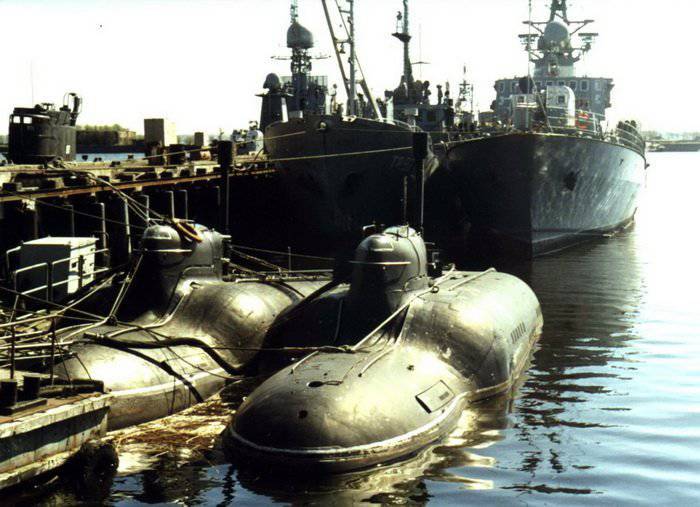 Aft flat bulkhead, equipped with a gas tight door, separated the CPU from the electromechanical compartment, where a diesel generator, a rowing DC motor, compressors, fans, pumps and other equipment were located on a special damped platform disconnected from the robust case. Noise-absorbing coating on the hull structures of the submarine in combination with a two-stage damping system provided the mini-submarine with a very small acoustic field. At the same time, the electromechanical compartment was uninhabited, while the boat was on a campaign, it was visited only to check the condition of the equipment. The screw, which was installed in the rotary ring nozzle, also served as a vertical steering wheel.

The crew of the mini-sub included all 3-s people. They were all officers: the commander-navigator, electronic weapons assistant and assistant to the electromechanical part. In addition to the crew, the boat could take on the reconnaissance and sabotage group in the number of 6 people. It was saboteurs who, in essence, were the main "weapons»Submarines. Combat swimmers could leave the submarine both on the ground and at depths up to 60 meters. Being outside the submarine, they had the ability to replenish the supply of gas mixture in breathing devices, as well as to apply electricity supplied from a boat through the wires. The autonomy of the submarine project 865 was equal to 10 days.

The direct development of the Piranha-type submarines could be the Piranha-2 mini-submarines with a normal displacement of 400 tons, which had an air-independent (anaerobic) power plant that used the Kristall-20 fuel cells. The maximum submerged speed of such a submarine was supposed to be 12 knots, and the cruising range about 1200 nautical miles. The boat was planned to equip 2-8 torpedoes in special launchers on a light body. At the beginning of 1993, Malachite began to promote its submarine in the international market. In this case, the normal displacement was brought to 250 tons, and the crew grew to 4 people. In general, based on the 865 Pr submarine, a whole family of submarines with a displacement from 130 to 920 tons was developed. 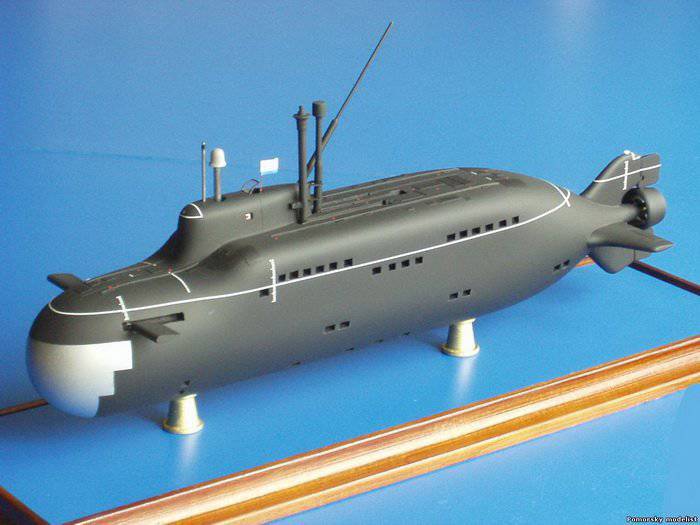 The fate of the ships of this project was quite sad. Already in March 1999, both built boats were towed to Kronstadt, where they were cut for scrap. In the fleet, they have not served and 10 years. There were several reasons for the withdrawal of boats from the fleet: this is, first of all, the lack of funding, as well as the opinion of a number of naval officers about the uselessness of such submarines to the Russian fleet. It is worth noting that before the mini-submarines were sawn into scrap metal, one of them took part in the filming of the comedy “Peculiarities of National Fishing”.

Tactical and technical characteristics of the "Piranha":

Ctrl Enter
Noticed a mistake Highlight text and press. Ctrl + Enter
We are
Submarines type "K" series XIV - "Katyusha"Submarines of the Pike type
34 comments
Information
Dear reader, to leave comments on the publication, you must to register.