Russia is creating a unified integrated base system for nuclear submarines 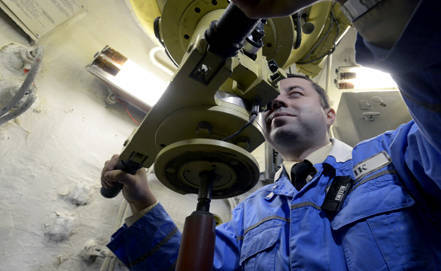 In Russia, a unified integrated system of basing nuclear submarines is being created, ITAR-TASS was told at the Directorate of the Press Service and Information of the Russian Ministry of Defense in connection with the Day of the Submariner Maritime Day celebrated in Russia today.


“The construction of a prospective naval submarine force-based system today is based on such principles as favorable military-geographical and physiographic conditions, as well as the possibility of rapid deployment to combat areas,” the Defense Ministry noted. “In addition, the proximity to mobilization resources and transportation hubs, minimization of financial and economic costs and development of the logistics infrastructure. "

"When forming a prospective submarine-based basing system, it is important to have shipbuilding and ship repair facilities," the military department stressed, pointing out that "there must be favorable social conditions for the servicemen and their families to live, safe from natural and man-made threats."

"As a result, qualitatively new conditions must be created to ensure the deployment of submarines, which will be facilitated by the creation of a unified integrated system of basing nuclear submarines," the Defense Ministry concluded.

Ctrl Enter
Noticed a mistake Highlight text and press. Ctrl + Enter
We are
March 19 - Submariner Day in the Russian FederationToday, the servicemen of the Submarine forces of the Russian Navy celebrate their professional holiday - the Day of the submarine
41 comment
Information
Dear reader, to leave comments on the publication, you must to register.