Fifth generation submarines: what to expect from them?

March 21 2013
28
This week, 18 March, RIA News With reference to the general director of the TsDB Rubin Igor Vilnita, reported that Rubin began the development of 5-generation submarines, both nuclear and non-nuclear. According to Vilnita, the creation of the appearance of new ships is carried out taking into account the suggestions and comments that come to us during the operation of ships of previous generations and the lead submarines of new projects. Earlier, the commander-in-chief of the Russian Navy, Viktor Chirkov, said that the serial production of 5-generation submarines would begin in Russia after the 2030 year.


Currently, the foundation of the Russian underwater fleet make up the 3rd generation ships. The first submarine of the fourth generation - the strategic nuclear submarine Yuri Dolgoruky of project 955 Borey - was adopted by the fleet only in January 2013. In total, the Russian fleet will receive 8 such submarines - 3 of the 955 Borey project and 5 of the 955A Borey-A project. All of them will have to replace the 3rd generation of Project 667BDRM Dolphin on the Navy’s fleet, which currently form the basis of Russia's nuclear submarine containment forces.

The fourth-generation submarines also include ships of the 885 "Ash" project. Currently, the head submarine of this project is being tested and can be used by the Russian fleet this year. In total, by the 2021, the Russian Navy expects to receive the 7 nuclear submarine "Ash". Of the non-nuclear submarines, the 4 generation ships also include diesel-electric submarines of the 677 "Lada" project. The head submarine of this project, bearing the name "St. Petersburg", has been in trial operation in the fleet since May 2010. 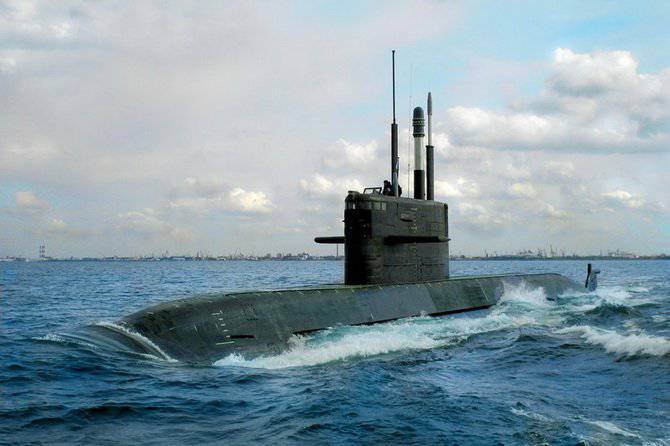 Diesel-electric submarine pr. 677 "Lada"
Earlier, the representative of the General Staff of the fleet said that the submarines of the 5 generation, the development of which was laid down in the state armament program (LG) of Russia before the 2020, would be standardized using both ballistic and cruise missiles. It is assumed that such ships will differ in greater automation of control systems, lower noise levels, long-range weaponssafe reactor. First of all, we are talking about new torpedoes and long-range cruise missiles.

The head of the Rubin Design Bureau stressed that the life cycle of modern submarines is about 50 years from the moment of research design to the moment of boat disposal. Therefore, the fact that work on the design of new ships started now, there is nothing strange. According to this principle, work has always been carried out. After the end of the design work on one generation of submarines, the designers began a new phase. This is a normal workflow that simply can not stand still.

Regarding the 5 th generation of the shock submarines, there are 2s of opposing concepts for their likely development: evolutionary and revolutionary. The first of these is the most likely and involves the gradual improvement of existing technical solutions that are characteristic of modern submarines. At the same time, some of the existing solutions are already at the limit of their development, and the very high cost of today's submarines will force the designers to try to do everything possible to reduce their final cost and reduce their dimensions. 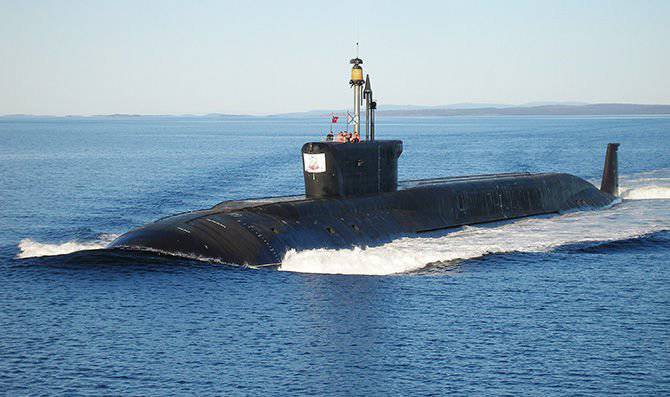 Strategic submarine project 955 "Borey"
The main method of cheapening is to increase the flexibility of using 5-generation submarines. In order to implement this in practice, it is planned to equip them with modules for replaceable weapons, as well as with unmanned underwater vehicles (NPA) and even UAVs. For the best location on the ship of a similar load, it is supposed to shorten the hull of the submarines, at the same time increasing its diameter. At the same time, perhaps, a return to the two-case architecture, but this decision is not tied to the requirements for reducing the price of the structure.

Today, all countries that have their own submarine development programs are searching for new types of propulsion systems, alternative hull lines, weapons use methods, target designation and information exchange methods based on new physical principles. At the same time, in any case, the automation of the 5 generation submarines will be significantly increased, and the method of their use in battle will be tied to the concept of a “network-centric war”, when the enemy will have to fight not with individual combat units, but with a single, monolithic system will include surface, submarine, air, land and space assets. All submarines of the future will be designed for operation in this “network”.

The use of the “network-centric war” concept, as well as the opinion of a number of industry experts, that the evolutionary path of development of the submarine fleet is a dead end, has led to the emergence of a “revolutionary path” of development. The basis of this concept is the rejection of “outdated” large nuclear submarines and the concentration on the production of small submarines with a displacement of up to 1500 tons, which have an auxiliary nuclear power plant. It is assumed that each of the mini-submarines individually will not be able to solve complex problems. They will be limited in autonomy, range of use of weapons and target designation, seaworthiness, but the deployed grouping of such submarines will surpass any modern submarine in effectiveness. And the loss of a part of such a group will not jeopardize the performance of the main combat mission. 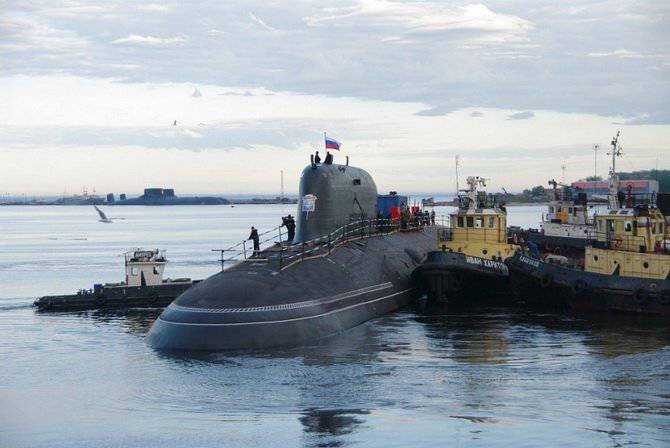 Multipurpose submarine pr. 885 "Ash"
Be that as it may, with all its logic, this concept now seems to be still quite futuristic for most of the representatives of the Navy, both the United States and Russia, because of their conservatism. Probably, this idea can be implemented in the framework of the 6 generation of submarines, but in the coming 10-15 years, the development of the fleet will follow an evolutionary path of development without any unexpected "jumps."

Currently, the main developers of boats in the country are CB "Rubin" and "Malachite." The designers of both design bureaus agree that future submarines will finally move to a one-and-a-half or one-body architecture with a buoyancy margin of 15%. Low-magnetic steel will continue to be used as the main structural material, but the proportion of the use of composite materials for both internal and external use will increase significantly. In addition, a search is underway for solutions that make it possible to abandon traditional fencing of sliding devices in favor of alternative design solutions, for example, a retractable walkway, folding in a developed superstructure, etc. At the same time at the moment there are no special prerequisites and the need to increase the speed of travel, autonomy or depth of the submarines. However, a decrease in displacement may lead to a reduction in the crew of the boats and a wide automation of shipboard facilities and equipment.

On the 5-generation boats, the final transition to jet propulsion is expected, perhaps even with the outboard arrangement of the electric motor as the main propulsion complex of the boat with the final displacement of the classic propellers from the scene. If we talk about the missile armament of such submarines, then, most likely, it will have hypersonic flight speeds. At the same time, the development of boats will be carried out in the direction of improving combat use algorithms and on-board electronics. 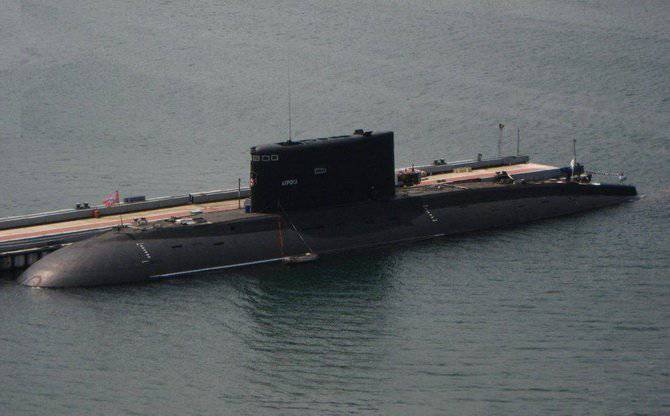 Diesel-electric submarine pr. 636.3 "Varshavyanka"
With the appearance on diesel-electric submarines of the 677 “Lada” project of the first hydroacoustic complex with a large area “Lira” quasiconformal bow antenna, the fleet has a tendency to equip with similar antennas and submarines in addition to on-board antennas, whose dimensions are also growing. These activities have significantly increased the aperture of antenna devices. Due to the abandonment of very large and heavy spherical antennas GAK with ballast systems, durable capsules and massive fastening elements, it will be possible to release significant volumes located in the bow of the submarines. On the one hand, this leads to a reduction in the dimensions of the hull of the boat, to simplify the design and reduce the cost of the entire SJC, and on the other hand, it allows engineers to return to the nasal placement of torpedo tubes, which is more advantageous from the technical and tactical points of view.

If we talk about underwater armament, then among the experts there are different opinions on this matter. At present, it is believed that the caliber in 533 mm for rocket-torpedoes and torpedoes no longer provides realization of sufficiently high transport characteristics of ammunition (speed and range), and therefore a return to a larger caliber - 650 mm with the possibility of placing more powerful warheads on such torpedoes is necessary. parts and perfect homing system. However, along with this, 650-mm torpedoes have a large mass (about 5 tons against 2 tons in 533-mm torpedoes) and a length (about 11 meters). And this in turn leads to the complication and increase of torpedo compartments, torpedo-loading and charging devices, reducing the ammunition of the boat. Along with this, there is an opinion that for promising submarines there is a sense to increase the number of torpedo tubes for the production of massive volleys for numerous, including various purposes, using different weapon systems.

Ctrl Enter
Noticed oshЫbku Highlight text and press. Ctrl + Enter
We are
Ships built for 28.07.2013 of the year for the Russian Navy. Part of 1Bars submarine
Military Reviewin Yandex News
Military Reviewin Google News
28 comments
Information
Dear reader, to leave comments on the publication, you must to register.