March 20 2013
18
More recently, we were pulled by submachine guns, and there are two areas in the articles about this. weapons: options with ammunition of high penetration and weapons with a very large capacity of the store, and sometimes both were combined in one sample. It all started with an article about bison pistolsthat feed from the detachable auger store, and in the comments to the article it was proposed to get acquainted with the Calico submachine gun. Or rather, not with a single submachine gun, but with several at once, which, although differing in details, still differ.


Calico Light Weapon Systems appeared in 1990, and virtually all of the company's developments were built on one single idea in the form of an increased capacity screw shop. Nevertheless, the company managed to create a huge number of weapon models, both for the army and the police, and for the civilian market. Perhaps, it is worth starting with full-fledged samples, which are really machine pistols, and not their civilian versions without the possibility of automatic fire. Immediately it should be noted that many sources indicated that the company collapsed at the beginning of 2000, but nevertheless, 2013 is already in the yard, and the company's website is functioning, and even there are prices for individual weapons in the catalog, so no one has gone anywhere and weapons are still being manufactured and may even be being developed.

Let's start with the most interesting sample, which is known under the designation М950. This compact sample of a submachine gun has a magazine with a capacity of 50 ammunition, while its dimensions are comparable with the samples the magazine is inserted into the handle of the weapon, and accordingly has a smaller capacity if its length is not up to the knees of the shooter. The M950 submachine gun does not have a butt, but this is compensated by the fact that firing from it is envisaged when held with one hand, which is quite convenient when shooting single, but with automatic fire you will probably have to grab a short forearm of the weapon, as even the perfect balance submachine guns will not be able to offset recoil. However, shooting with one hand will also go for a disturbing fire, if the shooter’s physical abilities permit. In addition to the auger shop, in this submachine gun there is another interesting point, in the form of ejection of spent cartridges down, and not to the side. So many people are mistaken in the fact that a submachine gun can use both box magazines and auger ones, taking the place of ejection of spent cartridges as the neck for a shop. Automatic submachine gun is built on a semi-free shutter, the slowdown of which is provided by the rollers. Thanks to this, it was possible to significantly reduce both the stroke of the shutter and its mass. This submachine gun in its time received a very great popularity, mainly due to the fact that the location of the store has a positive effect on the balance of weapons, as well as the large capacity of the auger store, however, a more practical sample, the M960, has become more common.

At its core, this pattern of weapons completely repeats the previous one, however, it has several significant changes that make it more convenient and efficient and this is not a magazine with a capacity of 100 cartridges. The main feature of this PP has become a retractable butt, as well as a longer barrel and fore-end with an additional handle fixed to hold it. On the one hand, an increase in the size and weight of the weapon should have a negative effect on the sample itself, but no submachine gun without a normal shoulder rest can compete in its effectiveness with the sample in which this part is. Thus, due to the increase in the length of the barrel, bullets gained an increase in speed, and thanks to a more comfortable and reliable retention of weapons, automatic fire became more heaped. However, the long barrel of the weapon did not exist for long and was shortened very quickly, and it was possible that they even did it right, as the muzzle brake recoil compensator appeared on the barrel. The length of the sample barrel is 330 millimeters, with the total length of the weapon being equal to 647 millimeter with the butt folded and 835 millimeters with unfolded. Weight without ammunition is 2,17 kilogram. Shops can be used with both 50 and 100 cartridges. The sample rate of fire equals 750 per minute shots. 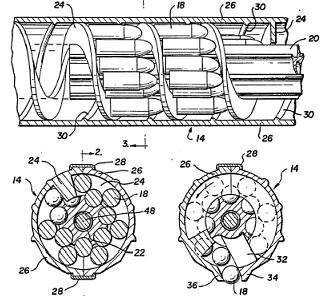 A few words need to be said about the store, or rather, about the process of charging. It is possible to manually charge the magazine, but agree that shoving 100 cartridges is constantly turning the auger and the pleasure is still there. It was to facilitate the process of equipment store in its design was added folding small handle. Placing the magazine in the device to facilitate the process of equipment, which is nothing but the usual "funnel", you can quickly equip the shop just a few times by scrolling this folding handle, and the cartridges will fall into the auger just under its own weight. In general, a high-capacity store has both its advantages and disadvantages, it seems to be like cartridges without changing the store, but when you think about the equipment of this store, it becomes bad.

In addition to the options for weapons chambered for 9x19, the company’s plans since the 2012 of the year (according to information from their website) to create a series of samples for .40 cartridges of caliber, but so far deaf, apparently, are not interested people in such weapons.

For the civilian market and for training shooting, Calico Light Weapon Systems has adapted its weapons for the .22 LR ammunition. Naturally, for a civilian market, such a weapon is supplied only in a self-loading version, without the possibility of automatic fire.

Despite the seeming simplicity of adaptation, these samples are somewhat different from the versions of weapons for 9x19 cartridges and not only in the fact that their design uses a free gate. If you look closely, it is immediately noticeable that the ejection of the sleeves in these samples occurs through a window on the right side of the weapon, and the forend and sights are somewhat modified. So, the front sight is now mounted on a high stand on the barrel of the weapon, and the rear sight is located on a similar stand almost above the trigger. The forearm of the weapon has become round and it seems that it is not connected with the receiver at all, but only fixed on the barrel. There are quite a lot of different variants of such weapons. I personally like the M100 with the 100 magazine, it’s too heavy, but it has no tangible impact at all, but what’s the impact of a “small-scale” cartridge.

For the civilian market, there are quite a lot of various options for self-loading carbines based on submachine guns for 9x19 cartridges. And in this case we are talking about quite suitable samples, in contrast to the recently considered AR pistol 9, which can be used both for hunting and for entertaining shooting, without recalling the reloading of weapons. Naturally, they are heavier than other similar models of weapons, but such is the charge for the large capacity of the store, although this is irrelevant where there is a limit on the number of cartridges in the store. Actually, it is this restriction for civilian weapons that makes the proliferation of weapons very sluggish, since the main market for weapons is traditionally the United States, and there are some limitations that, although differ in states, are in many respects the same. But we will not go through all models of civilian weapons, since there are 11 models there is an assumption that this is not all.

In general, here and so "at a gallop across Europe" about Calico submachine guns.

Ctrl Enter
Noticed a mistake Highlight text and press. Ctrl + Enter
We are
Pistols of the Hungarian gunsmith Rudolf von Frommer (part 3)Submachine gun Bison in all its manifestations
18 comments
Information
Dear reader, to leave comments on the publication, you must to register.