Ukrainian nationalism: the way to the abyss 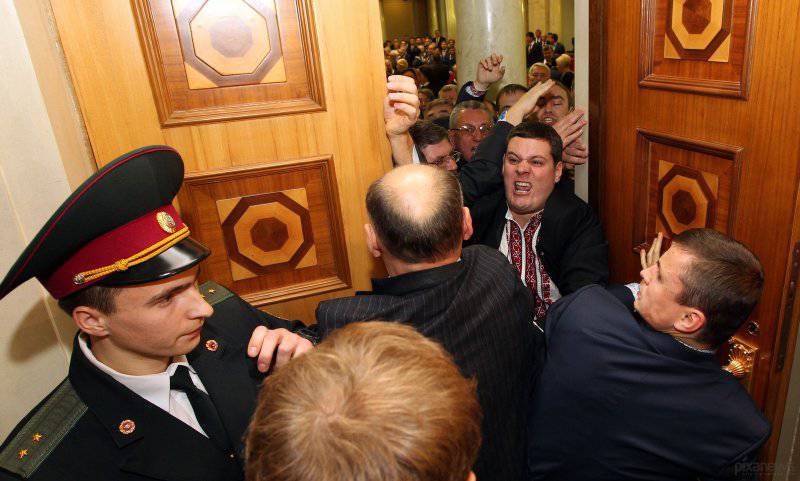 There is no point in talking about the first representatives of the Ukrainian nationalism of the OUN-UPA, since it is safe to say that the history of the emergence and activities of this organization is well known to many, if not all. It makes sense to talk about the peculiarities of Ukrainian nationalism and its manifestations in the conditions of modern reality.

As soon as Ukraine became an independent state, the tendency to popularize the extreme stage of nationalism began to increase. The emigrant diaspora and the west of the country turned into ideological centers. At the same time, it is necessary to note the fact that nothing fundamentally new in the representation of the nationalists regarding the proper future arrangement of the state and the nation has appeared. And instead of making even the slightest attempts to build a modern democratic state, the Ukrainian people see an attempt to rehabilitate chauvinists and collaborators, at the same time spreading xenophobic and Russophobic attitudes among the inhabitants of the western regions of the country. Thus, this kind of nationalism is not at all nationalism in its purest manifestation, but rather a deviation from it, which has nothing to do with patriotism.

In order to understand how Ukrainian nationalists behave in relation to the residents of EU member countries, and even more so in relation to the Russian-speaking population in the eastern regions of Ukraine, there is no need to go far for examples. So, in particular, in February 2011, in connection with the anti-Polish speeches in Lviv, the World Congress of Poles and their descendants who lived during the Second World War in the eastern outskirts of Poland, was forced to turn to the Polish Prime Minister Donald Tusk with an open letter . In this letter, it was said that at the end of January, in the center of Lviv, which is an important city for Europe and Poland, the Ukrainian nationalists, intoxicated by the OUN-UPA cult, organized a torch procession that strongly resembles the Nazi marches. Germany. According to the authors, the Polish Consulate General in Lviv did not react to this statement, which may indicate an underestimation of Ukrainian modern nationalism.

In addition, the battalion "Nachtigall" and the division "Galicia", which are built by the Ukrainian nationalists to the rank of real heroes, were recognized by the Nazis and Nazi collaborators during the Nuremberg trials. Further more. During the presidency of V. Yushchenko, the Ukrainian capital in general was turned into a fair of anti-Semitic and fascist literature. Judge for yourself: what can you say if the notorious “My Struggle” and similar books were sold freely in Kiev, moreover, translated into Ukrainian. And this is despite the fact that in most European countries, those who sell such literature face imprisonment.

It should be noted that anti-Semitism, which is present in the ideology of Ukrainian nationalism, is generally a topic for another conversation. German fascists used anti-Semitism as a convenient tool with which they could justify everything, from some small setbacks to crimes against humanity. As for modern Ukraine, the allegations that “Muscovites and Jews are to blame for everything ...” can be heard at almost every meeting of nationalists, including completely peaceful gatherings in cafes and street marches with banners, swastika flags and slogans.

Another important point, which occupies a considerable place in the activities of modern nationalists, is the destruction of monuments to the heroes of the Great Patriotic War and Soviet political figures, as well as the desecration of the graves of Soviet soldiers killed by the Nazis. But when it comes to the destruction of monuments, there can be no talk of a stable future for the state. In Kiev, the monument to N. Krupskaya was disfigured, in Zaporozhye - the monument to Stalin was blown up, in Borispol - the monument to Lenin was destroyed, the same was done already this year in many other Ukrainian regional and district centers. Several years ago, in Lviv, on the Alley of the Hill of Glory complex, the graves of Soviet soldiers were desecrated, and the Ivano-Frankivsk leadership refused to follow the graves of Soviet soldiers buried in the cemetery in the post-war period, suggesting that veterans do it themselves ... This is only a small part of those feats in which Ukrainian nationalists have distinguished themselves recently.

The UN General Assembly in 2010 adopted a resolution by a majority vote, according to which any racist propaganda, as well as the slightest attempt to glorify the Nazis, is outlawed. The resolution was supported by representatives of 129 states. America opposed the document, as well as two small Pacific states that are in association with the United States - the Marshall Islands and Palau. But why in fact followed their example and Ukraine, which abstained from voting? Should it be considered a recognition that the Ukrainian government closes its eyes to what is happening in the country? In fact, the Ukrainian state was in favor of racism, xenophobia and ethnic discrimination, even indirectly, because the UN resolution concerned all forms of practice that contribute to the spread of racial discrimination, intolerance and xenophobia.

Today, many are greatly worried by the rapid growth in popularity among the population, especially in the western regions, of the All-Ukrainian Association “Svoboda”, a radical nationalist movement headed by Oleg Tyagnibok. Despite the fact that in the course of its development this party was forced to slightly correct the name, rhetoric and symbolism, abandoning the so-called “Idea of ​​the Nation” sign, very much like a swastika, it still retained its initial ideas. And the last parliamentary elections in the country have shown that in Ukraine there is a fairly large percentage of potential supporters of radical nationalism. The movement, which only a few years ago was called the “Social-Nationalist Party of Ukraine” (by analogy with the same party of fascist Germany), went to the Verkhovna Rada without any problems at the 2012 elections. But two years ago, the slogans and appeals of Freedom were perceived as something utopian, marginal and completely incapable of attracting the attention of the people. Nationalists received the voters mainly because the population of the West of Ukraine was disappointed in the policies pursued by BYuT, Our Ukraine and the Party of Regions.

Meanwhile, Svobodtsy did not come up with any new propaganda methods, and they use all that was popular among the ultra-right forces of the first half of the last century, in particular, the search for external enemies, a combination of national and social rhetoric, appeal to traditions and religion. Those ways of solving the problems that Freedom offers do not threaten the economic structure of the country so far, therefore, at the first stages, they can well satisfy both workers and entrepreneurs. At the same time, the party is actively cooperating with street ultra-rightists (by the way, among the deputies of the Lviv City Council, there are quite a few immigrants from football fans who are nationalist-minded). It is no secret to anyone that Freedom actively cooperates with so-called autonomous nationalists. Thus, the nationalist Ukrainian party, unlike the rest, forced to buy extras for holding actions and rallies, may well use the services of its supporters, albeit not entirely free. Moreover, they are reliably protected from the police, because all the neo-Nazis detained for disorderly conduct are protected by deputies and lawyers.

If we evaluate the activities of the Svoboda party as a whole, then it is necessary to note one more thing: those so-called patriots who declare racist ideas and almost sing Nazi hymns do not want to see not only in the CIS, but throughout Europe. Germany has not yet forgotten the consequences of the establishment of the fascist dictatorship in it, and this page in history is a great tragedy for the German people. The French also survived the difficult period of the Nazi occupation. But both Germany and France are the most important states of the European Union, so it is obvious that they will be the first to oppose the slightest support of Ukrainian nationalism.

Today, the Ukrainian ruling elites pursue an ill-conceived ethnic policy. Despite the fact that it is striving for a noble goal - the revival of Ukrainian culture, without taking into account the whole number of factors that influence the atmosphere in a multi-ethnic society, has resulted in a surge of xenophobia and Russophobia, a fall in inter-ethnic tolerance.

But the government needs to remember that with the historical lie and interethnic hatred, which is currently actively fomented, the future of the state will not be able to be built. And in no country in the world did such a rewriting of history take place, which could be observed during the years of V.Yushchenko’s presidency, and can be observed today due to the growth of nationalism in the western regions. The civilized world understands that the rewriting may come a time when someone wants to change something, in other words, to fight. But Europe understands perfectly well, because it remembers what radical nationalism can bring to the world.

Hence the quite obvious conclusion: the radical nationalists should not be allowed close to power ...