Square meters are growing, but the queue is growing 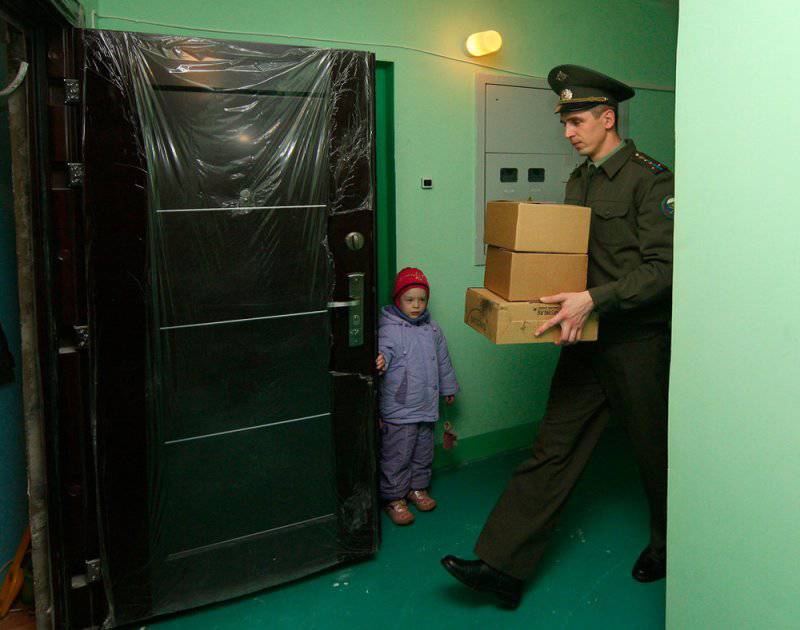 The housing question of the military has long touched all sectors of society, since it has long since moved from the social to the category of political. Unsettled and constant protests of "service people" significantly reduces the level of the country's defense. If you simplify what has been said: tell me if it will take weapon and will a homeless officer, whose family freezes in a hastily built barracks, and children are not provided with a normal level of education and health care, to defend the homeland?

In which country are the protesters coming out? For example, at the "parade of homeless officers" in which North officers took part fleet. Or a speech by three hundred active and retired officers with the support of representatives of the Communist Party of the Russian Federation, the union of military personnel and Just Russia in the city of Murmansk, who did not receive the apartments laid out by him under the Law of the Russian Federation. Military rallies in Moscow became almost regular. Desperate members of the military families repeatedly appealed to the first persons of the state to stop the eviction of families of officers and retirees from official housing. For many years, the Ministry of Defense has been deceiving the servicemen and those dismissed into the reserve by empty promises of providing apartments. The servicemen require for themselves only what is required by law: the provision of housing in their chosen region and within the time period established by law. What kind of military-patriotic education of youth can we talk about when officers who have devoted years of their lives to serving the motherland are forced to ask the state to fulfill their obligations to them.

Officials of the Ministry of Defense constantly flaunt astronomical figures of square meters, commissioned housing for military personnel. Only the queue of those in need does not become smaller. Of course, every officer dismissed from the ranks of the Armed Forces wants to get housing in the region where he can find work for himself and provide for his family. And these are big federal centers and cities. Therefore, the attorney of officials of the Ministry of Defense about the desire of servicemen to live near Moscow or St. Petersburg is at least not decent.

O. Shvedkov, Chairman of the Central Security Committee of the Department of Social Security Services, believes that unresolved housing issues are not related to the objective difficulties referred to by the Ministry of Defense, but to the inability of the heads of the military department to organize this process. Shvedkov proposes to create a separate department that would acquire apartments for military personnel from developers and be responsible for building new housing for officers and their families. It is difficult to say how realistic this offer is. Will we get a second Oboronservis, the case of which, and its affiliated organizations, are constantly overgrown with new corruption and criminal facts.

The recently held Council for the Development of Civil Society and Human Rights under the President of the Russian Federation discussed the housing problem of servicemen. According to the Ministry of Defense, about eighty thousand active soldiers have no shelter. And this is despite the fact that in 2012, service housing received 49 thousand military. Each year the queue increases by about 25 thousand people. How realistic it is for such a situation for the Ministry of Defense to fulfill its obligations to provide housing for servicemen is unknown. As acknowledged by the deputy head of the Ministry of Economic Development and Trade in the Ministry of Defense, there is no centralized registration of the military waiting list, therefore it is impossible to believe in the figures provided by this agency on the number of officers in need of housing and retired. Due to the unprofessional work of officials of the Ministry of Defense, a large number of already built housing is not inhabited, since their location does not suit many needy servicemen. The reasons may be different: the distance from the infrastructure, the inability to find work for the family members of the serviceman, an ecologically unattractive region, etc. For example, in the Podolsk district of the Moscow region for the military erected a whole neighborhood of housing, with the complete absence of the necessary social infrastructure and normal access roads.

Due to the fact that the period of free privatization of housing will soon come to an end (it will not last forever!) Another important problem arose for the servicemen - the privatization of existing housing. Since in the military departments the process of privatizing service housing can take (taking into account the need for court decisions) for several years, many soldiers will not be able to prepare the necessary documents in time. This is confirmed by the fact that a large number of military personnel for a long time, having the relevant decisions of the courts to provide housing, still have not received it.

And although public organizations are trying to help officers solve housing problems, the only hope is the willful decision of the current Minister of Defense S. Shoigu and the availability of financial resources to solve the housing issues of servicemen and retirees.

It is planned that from the year of 2014, the Ministry of Defense will fully switch to cash payments to homeless officers who will independently acquire housing. But in this step there is a hidden catch - if the amount is average throughout Russia, then it will be impossible to purchase housing in major cities.

According to experts, there are a lot of unused resources in Russia that could finance the housing program for servicemen. For example, the cost of building houses is very dependent on the payment for the land. If construction is carried out on land belonging to the Ministry of Defense, the cost of acquiring apartments will be much less.
There is another option: according to the law, the choice of the developer is carried out on a competitive basis. Why should one of the conditions of the auction not determine the number of square meters allocated by the developer free of charge for settling the families of military personnel?

Good managers believe that solving any problem has at least three solutions. Why are the leaders of the Ministry of Defense unable to find a way out of this situation for the strict implementation of the laws of the country to provide homeless officers with housing?