Iron fist of the Red Army. Tank park on the eve of the war

March 21 2013
24
To this day, the total tanks in the Red Army on the eve of the war. For a long time in domestic literature it was said about him with one phrase: "The Soviet Army had in service tanks of various types, of which 1861 were T-34 and KV tanks. The bulk of the vehicles were light tanks of outdated designs." Only recently have numbers begun to appear that really estimate the number of tanks available in the Red Army, but they also diverge, due to the difference in data in different archival sources (one of the reasons for this is the well-known domestic attitude to reporting and objectivity in reporting).

The greatest confidence is caused by the "Summary list of the quantitative and qualitative composition of tanks and self-propelled guns located in military districts, at rembazas and warehouses of NGOs as of 1 June 1941 g." N.P.Zolotova and S.I.Isaeva ("VIZH" №1 G93). According to her, the Red Army was armed with 23106 tanks and SPGs. Of these, combat-ready - 18691 or 80,9%. But this number is not final - from 31 May to 21 June 1941, 206 new tanks were shipped from the factories (KB - 41, T-34 - 138, T-40-27). Here, tanks belonging to 1 and 2 categories are classified as combat vehicles, according to the Manual on Accounting and Reporting in the Red Army:

1-I category is a new, not being in operation, meeting the requirements of technical conditions and completely usable property for its intended purpose;

2-I category - the former (being) in operation, it is completely serviceable and usable for its intended purpose. This also includes property that requires troop repair (routine repairs carried out by the forces of the unit itself).

The authors stipulate that there is no reliable information revealing the state of the Red Army tank park on June 22. But of all the data encountered, these appear to be the most plausible, although they contradict many well-established indicators, especially the quality status of Soviet tanks (agree that the difference between 27% good and 80,9% is quite large). 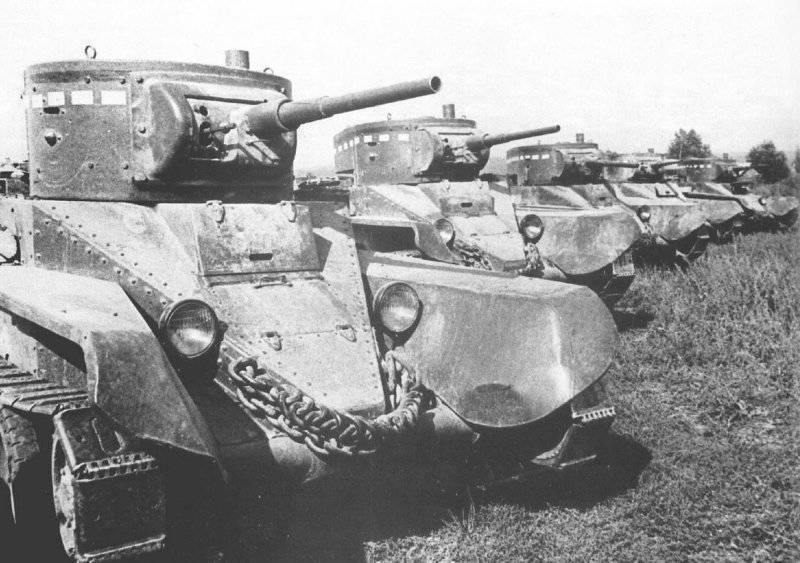 BT-5 on the autumn 1939 tactical maneuvers 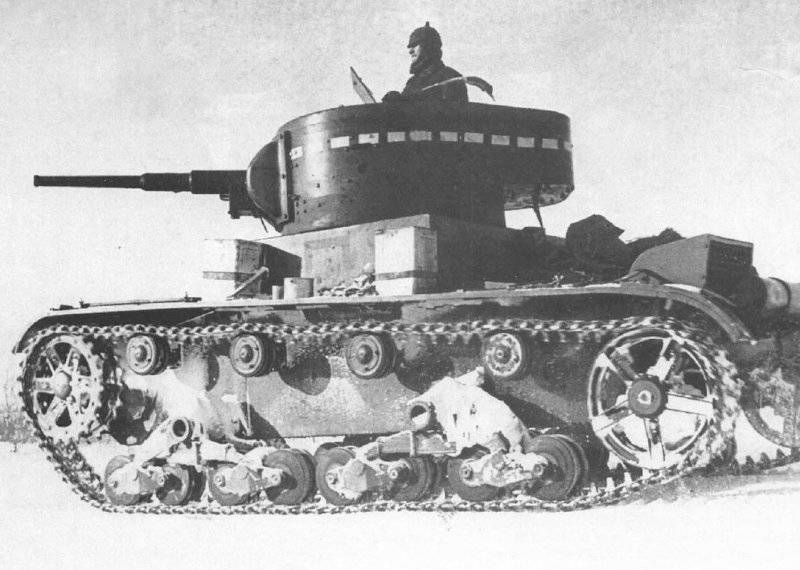 T-26 model 1933 on the teachings of the Moscow Military District in the winter of 1937. By the beginning of the war, the T-26 continued to serve as the “workhorse” of tank units and formations, remaining the most popular machine of the ABTV Red Army. 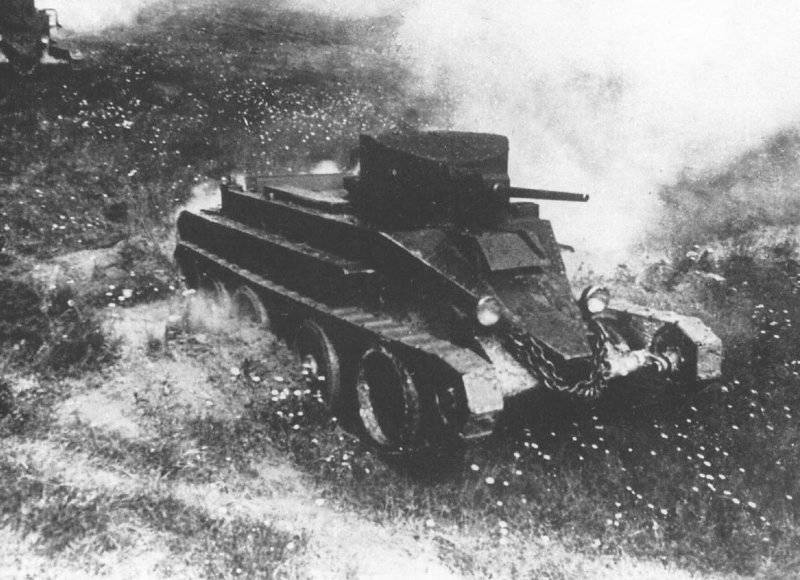 The total number of tanks here included machines of mechanized corps, tank regiments of cavalry divisions, tank battalions of airborne corps and rifle divisions. Evaluating the number of cars in the western direction, it should be borne in mind that the tank forces of KOVO, PribOVO, OdVO, LenVO and ZapVO with the beginning of the war were replenished with equipment transferred from rear districts.

Table No. 4. Quantitative and qualitative composition of the Red Army Tank Park to 1 June 1941 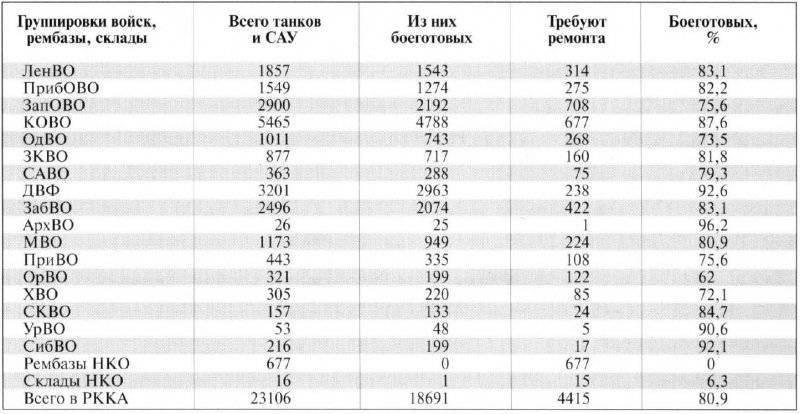 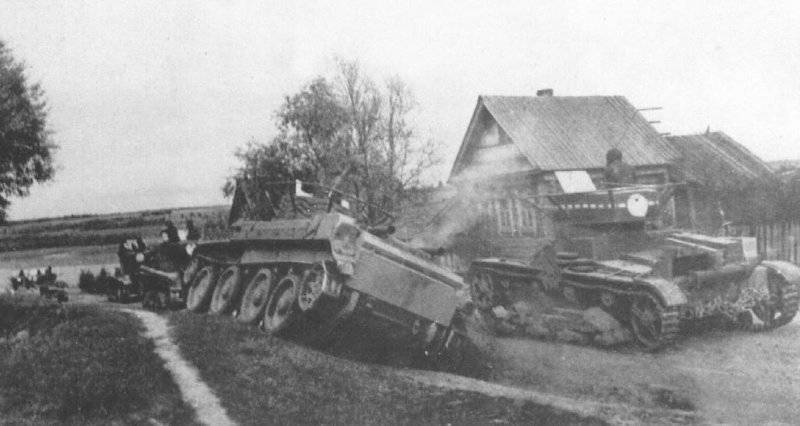 BT-7 and T-26 on the outskirts of the village during the pre-war exercises. 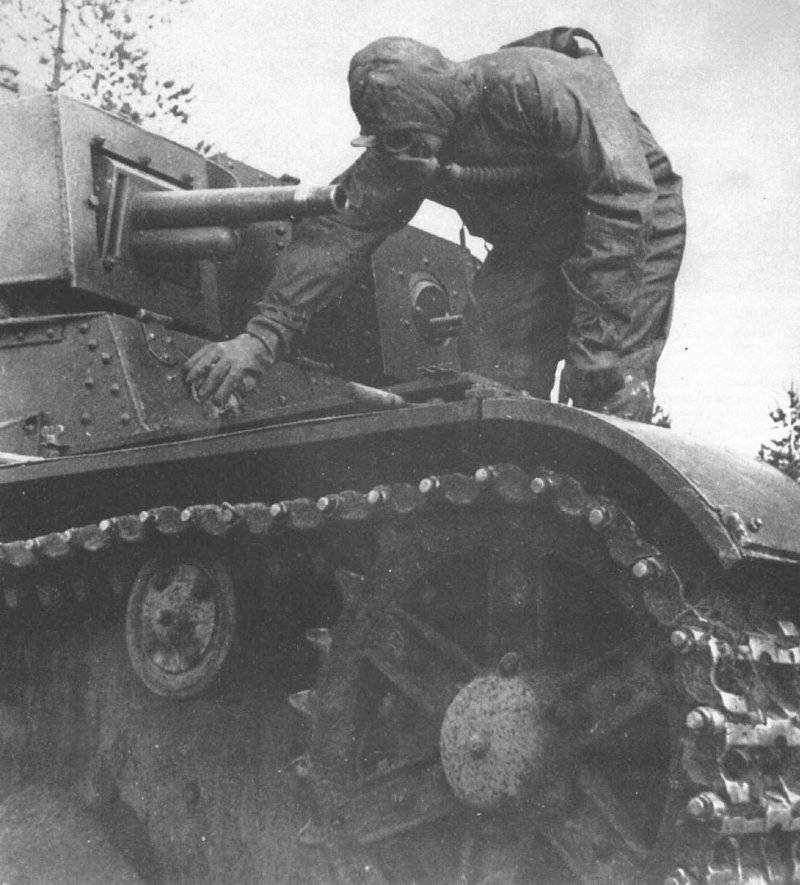 A tankman in a protective suit and gas mask inspects a tank after a training chemical attack.

And how did the German command assess the state of the ABTA of the Red Army? Before the war, the main command of the Wehrmacht determined the number of tank divisions in 7, plus 38 tank (mechanized) brigades. The inaccuracy of this information was caused by the fact that the formation of the mechanized corps continued, and the regular material part was missing. Already after the start of the war, German Army Chief of the General Staff of the Ground Forces G. Halder made the following entry in his service diary: “The number of tanks available to the enemy is assumed to be 15000 vehicles. This corresponds to 35 tank divisions. Of these, 22 was detected on the front. the enemy was greater than expected "(25.07.1941). On the whole, the Germans' ideas about the number of tank forces opposing them in the western districts were quite reliable, and it remains to be surprised how they risked starting a war by putting their 3329 tanks, most of them light, against this armada. 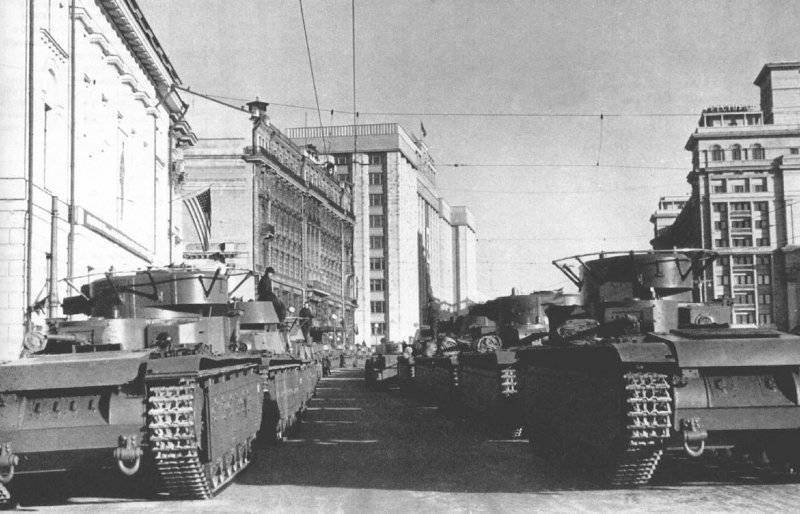 T-35 on Manezhnaya Square in Moscow 7 November 1940. The convoy contains tanks of different types, produced in small series - with cylindrical and conical towers, straight and inclined sub-tower boxes, and without hand-held antennas of radio stations. 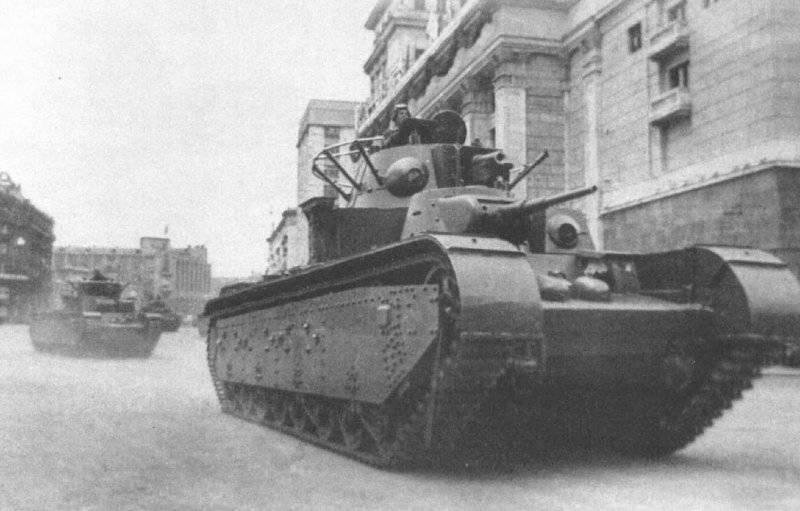 T-35 release 1939 g. With a conical tower and thickened armor. It is worth noting the placement of machine gun masks in bullet-resistant spherical segments.

Almost all of our huge tank fleet (see tab. 5) was lost in the battles of summer-autumn 1941. The total losses of Soviet tanks also remain in question. Figures from various sources, including reports of parts and formations submitted in the confusion of retreat, vary considerably, so here are the official data of the General Staff, published in 1993 g .:

Table No. 5. Loss of armored and mechanized troops in 1941

Table No. 6. Loss of armored vehicles in 1941 operations

A large amount of equipment was simply abandoned during the withdrawal of Soviet troops. So, only in a warehouse in Dubno, German troops seized 215 tanks, 50 anti-tank guns and a lot of other property. In the 10 Tank Division of the 15, the MK was abandoned during the retreat of 140 tanks (for comparison, combat losses amounted to 110 vehicles). In the 8 tank division of the 4, the crews destroyed 107 tanks, 10 went missing, 6 got stuck in the swamp and was abandoned. Knowing all this, it is already possible not to be surprised at the average daily loss of the SWF in an 292 tank. There was no such level of losses even in the largest tank battles of the war, for example, in the Battle of Kursk, this figure ranged from 68 (in the Oryol offensive operation) to 89 (in the Belgorod-Kharkiv offensive operation). 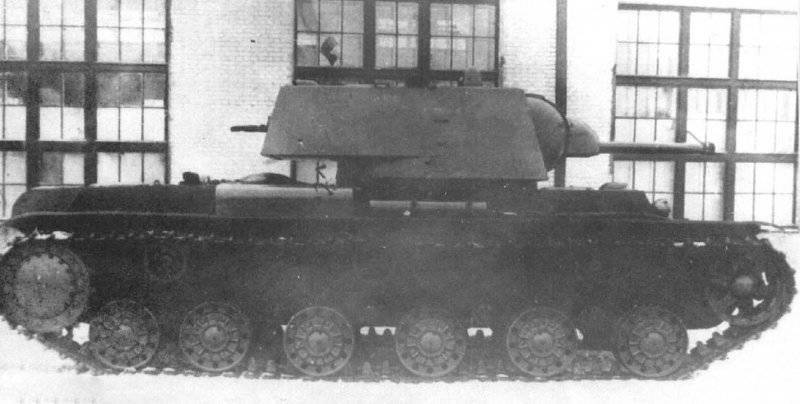 Heavy tank KV-1, adopted by the Red Army Army Aviation 19 December 1939. In the photo-KB-1 December 1940 release with a gun L-11 and a welded turret in the courtyard of the Kirov factory. 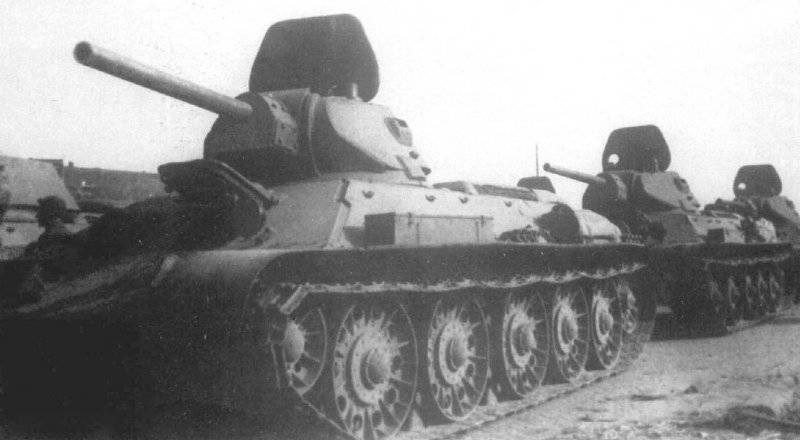 T-34 of model 1941 produced by STZ, which mastered the production of Thirty-Fours from the beginning of 1941. In the photo are tanks with an F-34 cannon and simplified rollers (without rubber bands) introduced at the beginning of the war. A characteristic feature of the Stalingrad machines is the armored case assembled "in thorn". 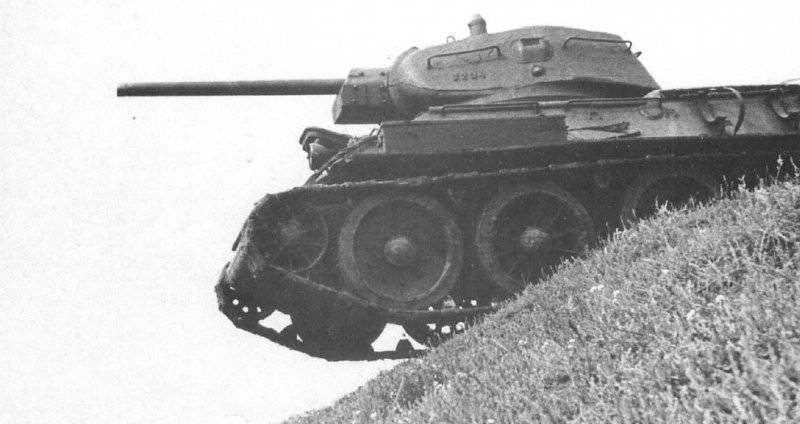 T-34 sample 1941, the plant number 112 "Red Sormovo". Almost on all Sormov tanks of the first series, the M-17T gasoline engine was installed due to the catastrophic shortage of B-2 diesel engines at the time of the evacuation of the plants beyond the Urals. The tank captured in the photo in the training unit lived to the end of the war and remained on the move as early as 1947. 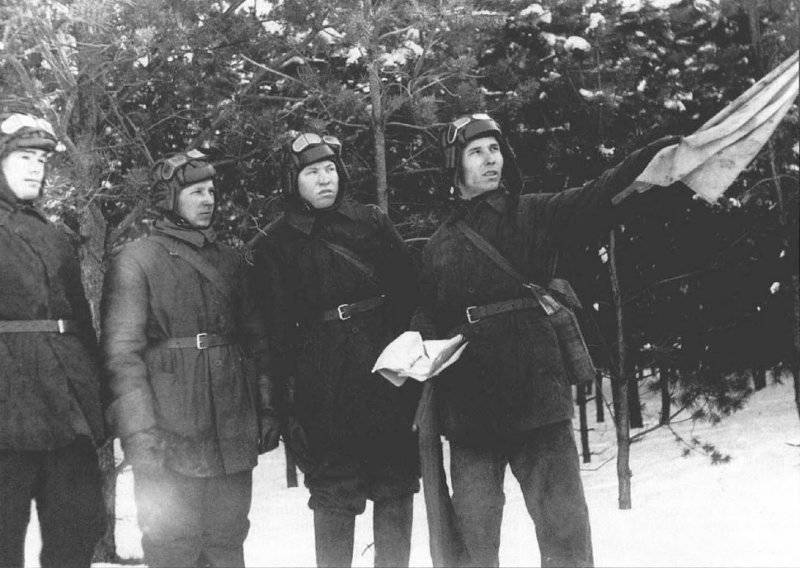 The tank commander Irshavsky sets the combat training task for driver mechanics. Tankers are dressed in black overalls, winter jackets, gloves with sockets and helmets of two types - hard and soft, with glasses-canned goods. An obligatory piece of equipment in the pre-war years was a shoulder bag with a gas mask.