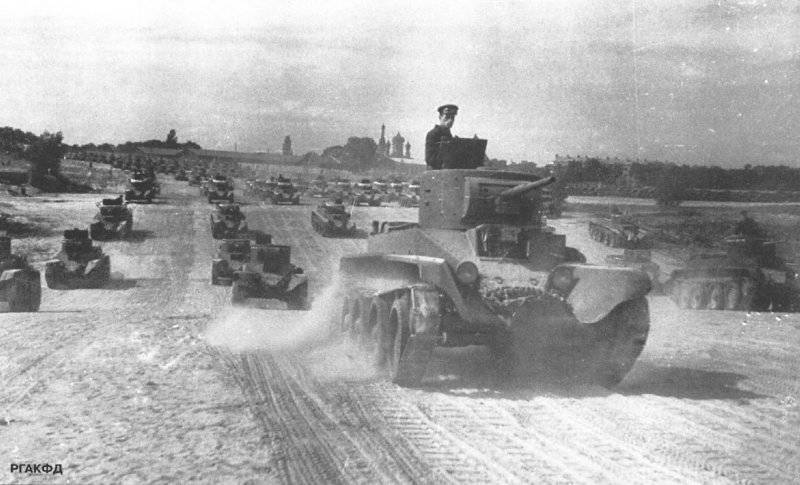 Tank part on the march, September 1935. In order to increase operational mobility since February of this year, high-speed BTs that replaced the T-26 became the main machine in the mechanized corps. Each mechanized corps in the state of 1935 totaled 348 BT.

9 June 1940 of the USSR NPO S.K.Timoshenko approved the plan for the formation of mechanized corps and conveyed his proposals to the SNK of the USSR. 6 July 1940 was issued a decree SNK USSR №1193-464ss, which said:

1. To approve the organization of a mechanized corps consisting of two tank divisions, a motorized division, a motorcycle regiment, one air squadron, a road battalion and a corps communications battalion. To the mechanized corps, to give one air guards as part of the 2 short-bomber and one fighter air regiments.

2. To approve the organization of a mechanized corps tank division and a separate tank division consisting of:
a) 2 tank regiments of one battalion of heavy tanks (each), 2 battalions of medium tanks and a battalion of flamethrower tanks in each regiment;
b) one motorized regiment consisting of 3 infantry battalions and one 6-gun battery of regimental artillery;
c) one artillery regiment in the 2 battalions: one 122-mm howitzer battalion and one 152-mm howitzer battalion;
d) the anti-aircraft division, reconnaissance battalion, bridge battalion and rear service units ...

3. To have a motorized division in the composition and organization approved by the Decree of the Defense Committee of 22 in May 1940, №215ss.

The existing tank brigades were converted to form tank divisions, mainly in the border military districts. Motorized divisions were created on the basis of infantry. Personnel and command personnel came from disbanded cavalry divisions and corps. 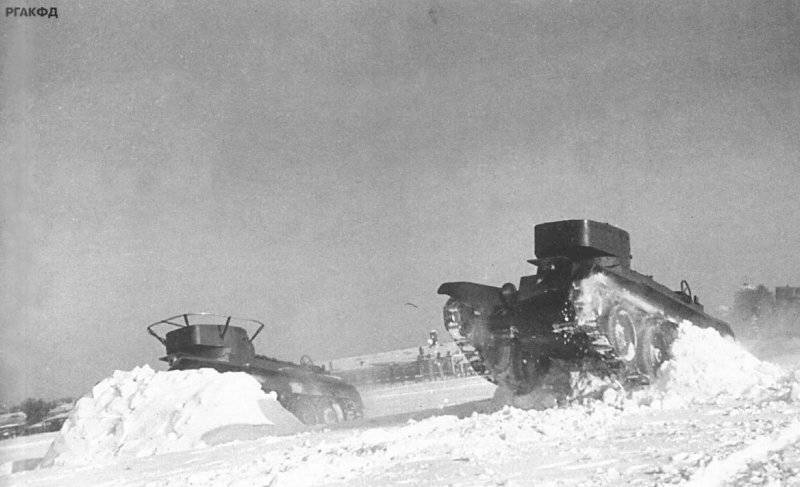 BT-5 LenVO in winter driving lessons. On the left is a commander tank with a radio station. 1936 Winter 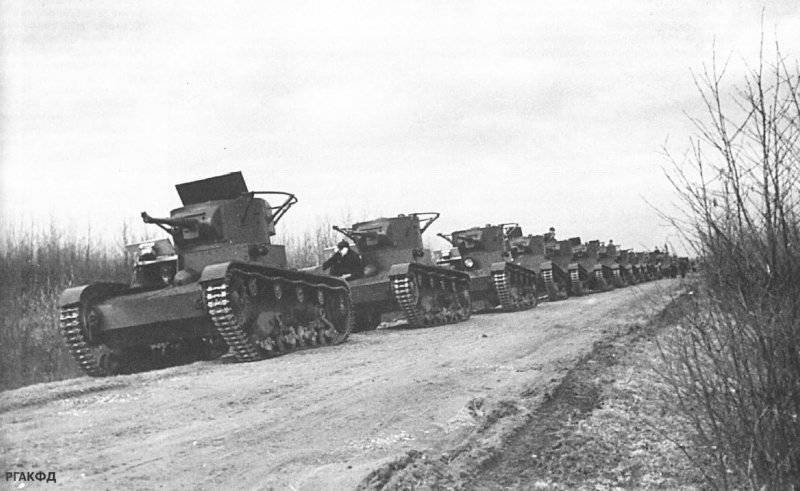 Column T-26 on a halt. Ahead - tanks model 1933 g., Equipped with a radio station 71-TK-1. With an increase in their number in the troops, such tanks began to be used not only as commander, but also as ordinary linear ones. LenVO, April 1936

The main form of use of a mechanized corps in a defensive operation was the use of powerful counterstrikes to destroy the enemy’s broken groups. The perceptible "dizziness from success", read in these plans, subordinated to the strategy of pre-emptive strike, turned into a tragedy after a few months. Most of the mechanized corps were part of the covering armies, being their main striking force. The rest were subordinate to the district, making up a reserve of front commanders in the event of war. This reorganization, designed to provide the Red Army with an unprecedentedly powerful striking force, ultimately proved unsuccessful both in its inopportuneness (on the eve of the war) and in the impossibility of quickly completing it with available resources. The idea itself turned into a prolonged period of re-formation, rotation of people and equipment, which led to a decrease in the combat readiness of already established parts and formations. The best on the eve of war turned out to be the enemy of the good. 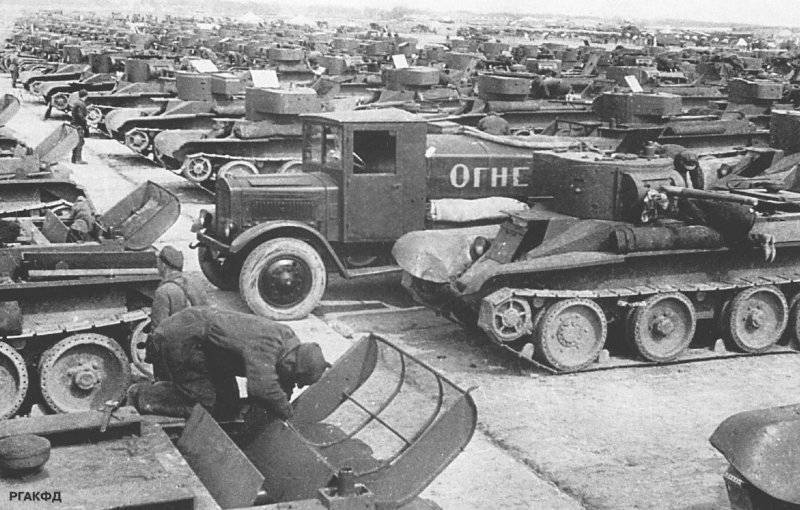 Inspection and refueling before going to the parade. In the ranks - BT-5 with welded (in the foreground) and riveted, more angular, towers. May 1934 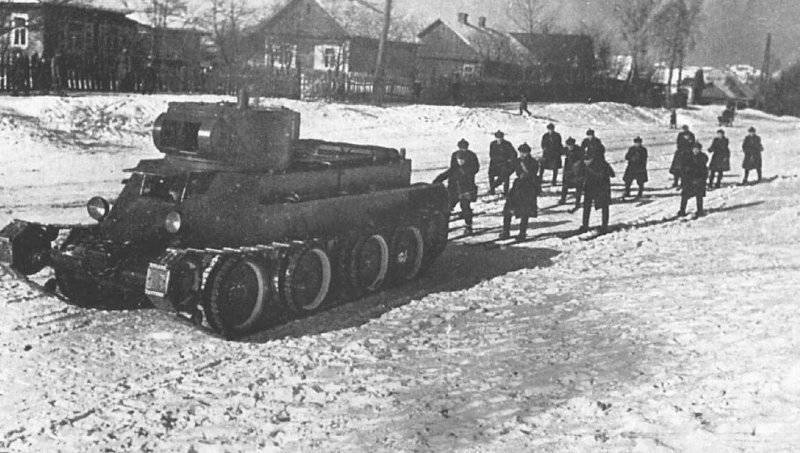 The BT-5 tows the skiers with the gun removed and without the fences. Winter, 1936

The speed of deployment of mechanized corps was very high, which caused a lot of problems. Due to the lack of new tanks, they had to be taken from tank battalions of rifle divisions and tank regiments of cavalry divisions, depriving these units of the main striking force. As G.K. Zhukov acknowledged in his memoirs, “we did not calculate the objective capabilities of our tank industry. To fully equip new mechanized corps, 16,6 thousands of tanks were needed only of new types, and only 32 thousands of tanks in total. there was no place to take any conditions; technical and command personnel were also lacking. " Nine corps commanded the Red Army a little, though, if they are staffed by state, then more than twice the German army armies in the number of vehicles and could decide the outcome of any battle. But instead of equipping the existing mechanized corps and their combat support in February 1941, the General Staff developed an even broader plan for the formation of armored and mechanized troops, which also included the creation of an 21 corps. 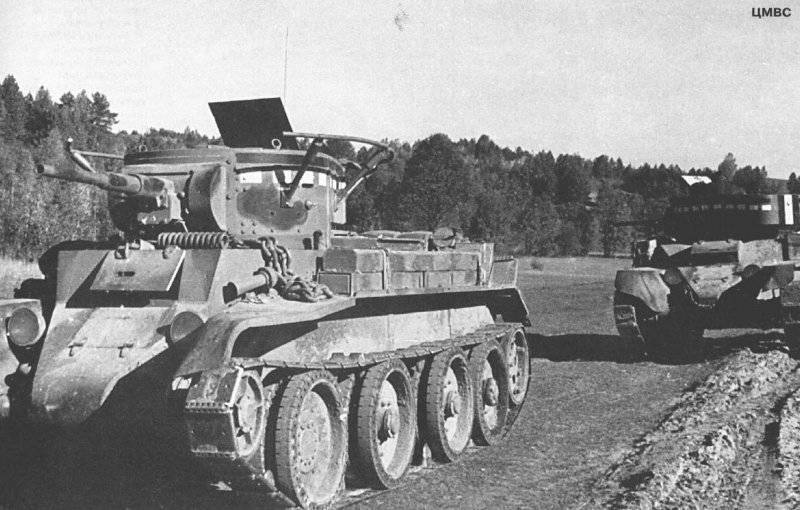 BT-7 on the drills. Wooden sleepers are laid on the fences, often used for self-pulling and laying on weak ground. On the sheet sheet is a "candle" - a spare suspension spring. 1936 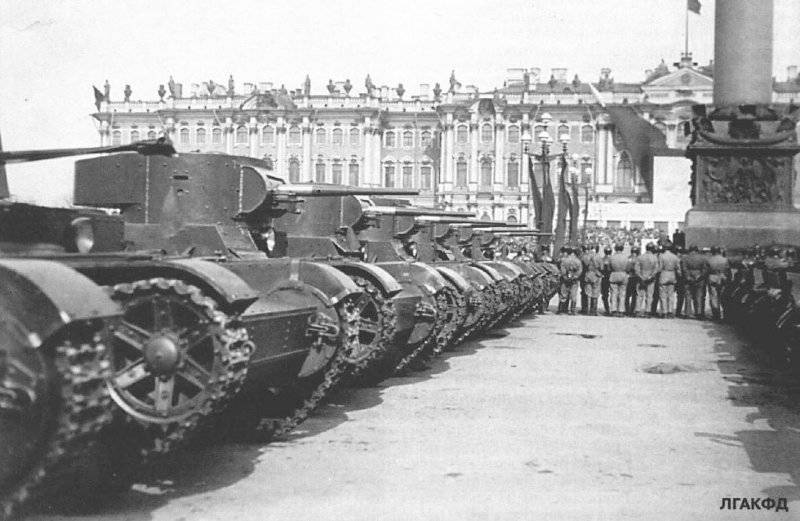 T-26 at the triumphal column before the start of the May Day 1934 parade in Leningrad.

Stalin did not immediately support this plan, approving it only in March 1941. Since April 1941, the mass deployment of mechanized corps began, for which there were no tanks, no command personnel, or trained tank crews. Personnel hastily retrained from other types of troops, which did not have the best effect on the level of newly-made crews who received scanty practice of operating tanks. For this process, the remaining tank brigades and some cavalry divisions were involved (for example, the 27 th m CABE was created on the basis of the 19 cd). But if yesterday's gunners, signalmen and chauffeurs still suited the role of gunners and driver mechanics, there was simply no one to appoint to senior positions (when the consequences of the “purges” of previous years affected). Commanding skills, experience and responsibility were forged by many years of practice, and on the eve of the war many leading headquarters remained incomplete even with leading departments, including operational and intelligence (as was the case with 15, 16, 19 and 22 mechanized corps).

Command personnel prepared the Military Academy of Mechanization and Motorization (VAMM) in Moscow and one-year courses with it. For training of the command and technical staff of the middle level, the network of educational institutions of the ABTV was expanded. By 1941, it included the Orlovskoye named after Frunze, the 1-e Kharkov, the 1-e and 2-e Saratov, the 1-e Ulyanovsk tank, the Kiev tank-technical, the Pushkin auto-technical, the Gorky auto cycle, the Poltava tractor school. In February — March, Kazan, Syzran, Chkalovsk, 1941, Ulyanovsk, 2, Saratov Tank, Ordzhenikidzegrad automobile cycling, and Kamyshin tractor schools were deployed. 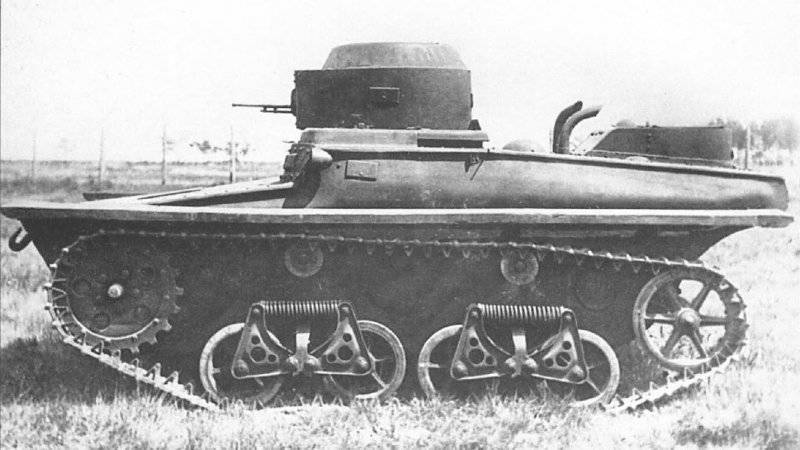 Small amphibious tank T-37, adopted by the 11 August 1933, as a tank reconnaissance units. In the photo - T-37A of early release without fences. 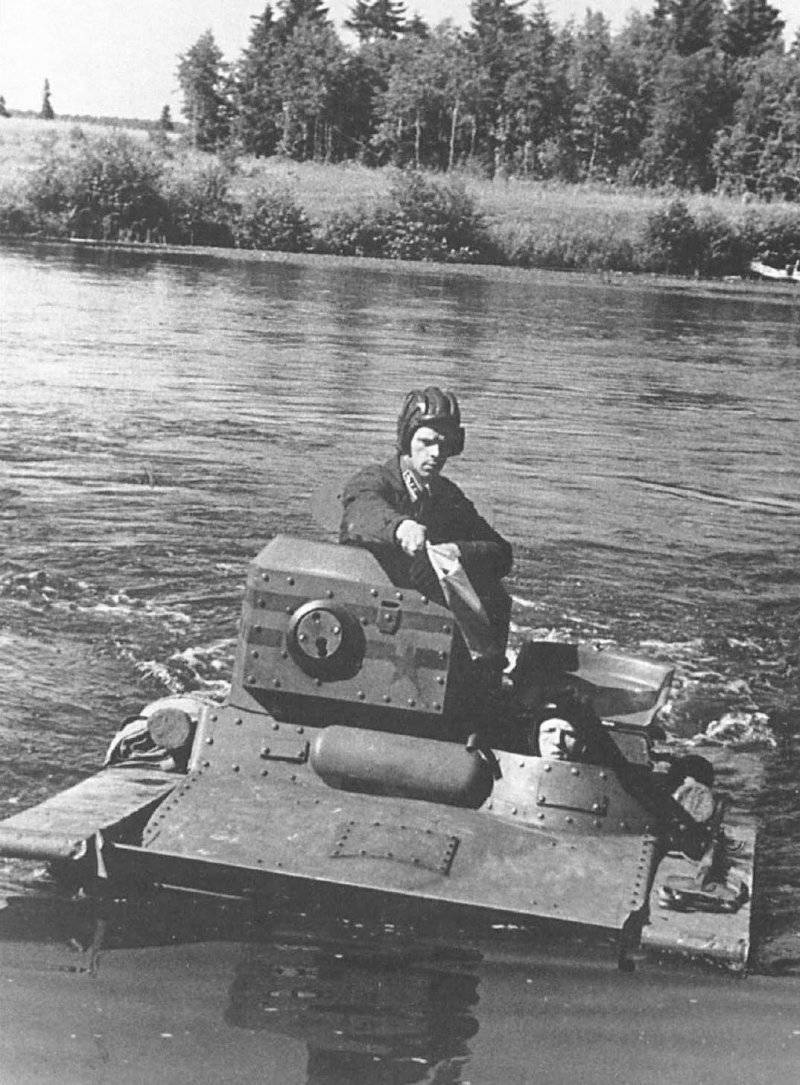 Due to the rapid pace of deployment of mechanized corps, it was not possible to organize combat coordination between units and subunits. In December, 1940, speaking at a meeting of the senior commanders of the Red Army, the head of the ABTU, Ya.N. Fedorenko, said: "This year the corps and divisions worked out the issues of entering a breakthrough and an offensive, but this is just an introduction, no combat interaction and cohesion in these matters not yet". The preparation of a tank company in a defensive and offensive battle was supposed to be completed only by May — June 1941, and coordination of the regiment, division, and corps was scheduled for later periods.

By the beginning of World War II, 29 mechanized corps were formed, which had different degrees of manning. 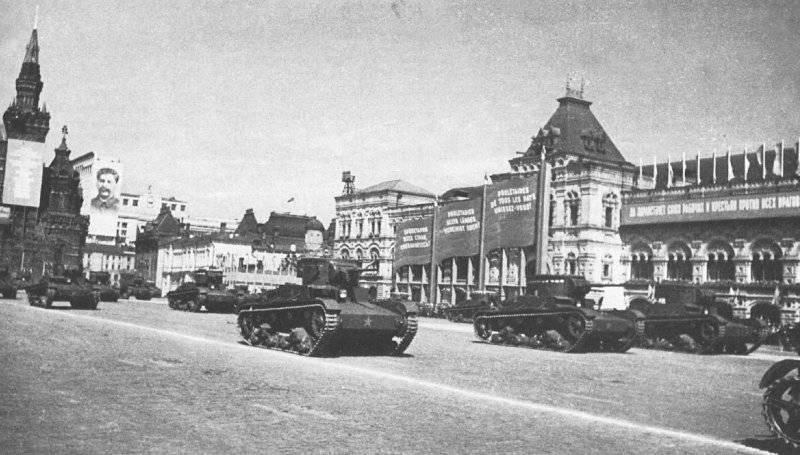 Table No. 1. Mechanized corps of the Red Army 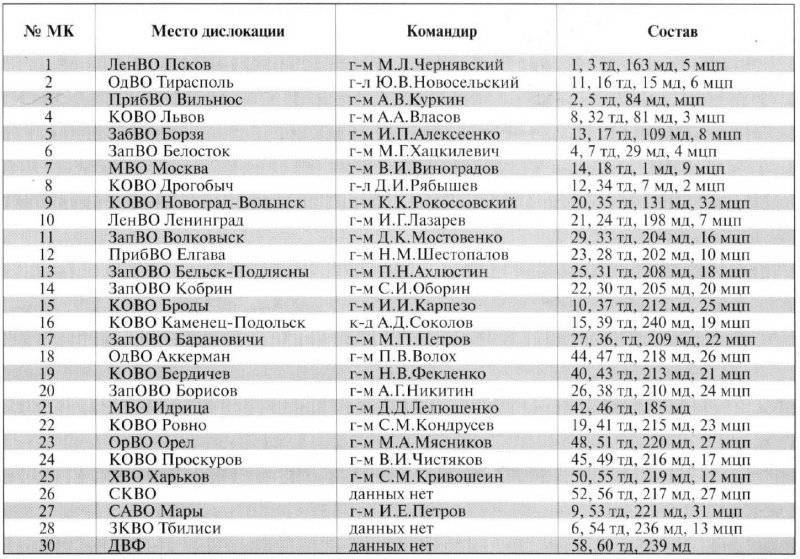 Note, 5,26,27 MK in June 1941 were transferred to border districts as part of the armies of the second strategic echelon.

On the quantitative composition of the tank fleet of mechanized corps says the following table:

Table No. 2. The quantitative composition of the tank fleet of mechanized corps by mid-June 1941 g. 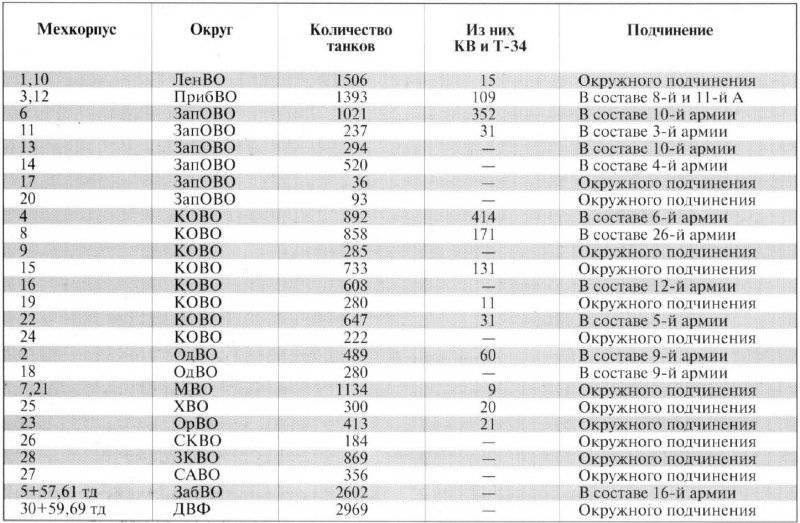 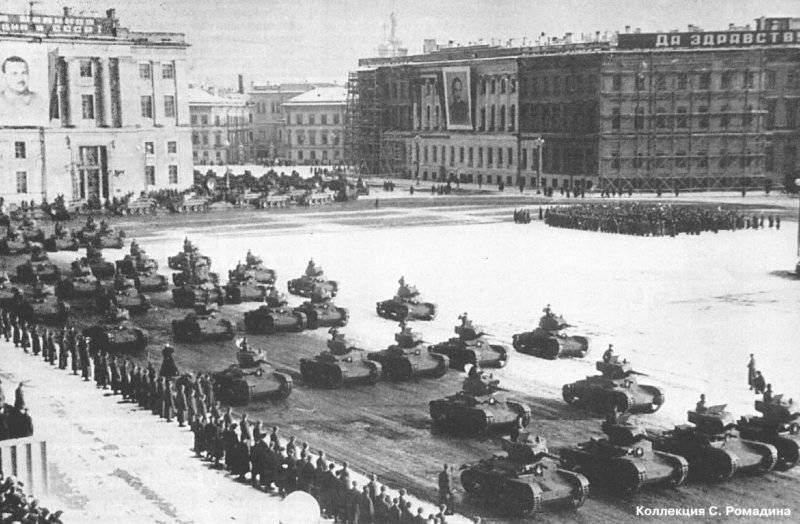 Celebrating the anniversary of the October Revolution 7 November 1940 in Leningrad ...

The largest number of tanks was in the KOVO mechanized corps, which fully corresponded to Stalin's point of view that in the event of war the Germans would deliver the main blow in Ukraine. Therefore, the southwestern direction was considered the main one. 4 and 8 mechanized corps had only KB and T-34 about 600 units and more 1000 tanks of other brands.

A lot of troubles caused the diversity of the tank fleet of buildings. Many cars were discontinued, they stopped producing spare parts.

Due to the fact that the staffing of the mechanized corps was delayed, the 16 General Staff in May 1941 sent a directive to the troops, according to which, in order to strengthen the anti-tank capabilities of the troops, prior to their receiving tanks, they were armed with 50- and 76-mm DT guns and machine guns for use in case of necessity as anti-tank regiments and divisions. The regiment was supposed to 45 18-mm guns, 45 24-mm guns, 76 machine guns. But the directive of the General Staff was not realized before the outbreak of the war, and the ZNOVO 24 and 17 mechanized corps, whose tank regiments were to receive anti-tank artillery, were generally used in combat as rifle units. 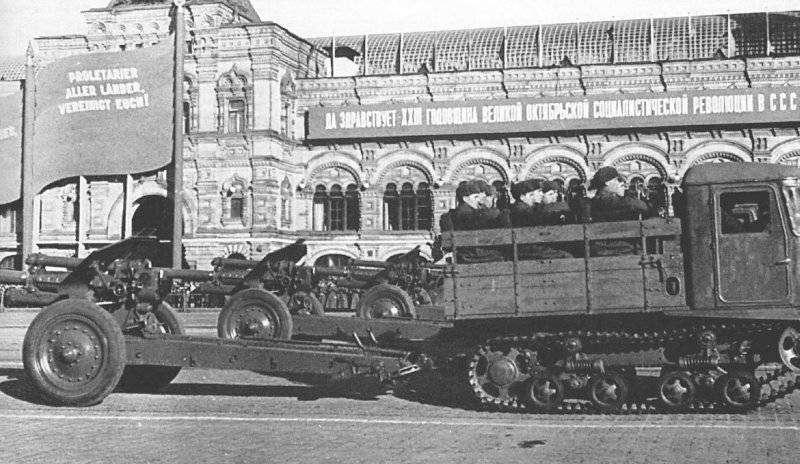 ... and in Moscow: the STZ-5 artillery tractors with M-ZO howitzers are moving across Red Square. 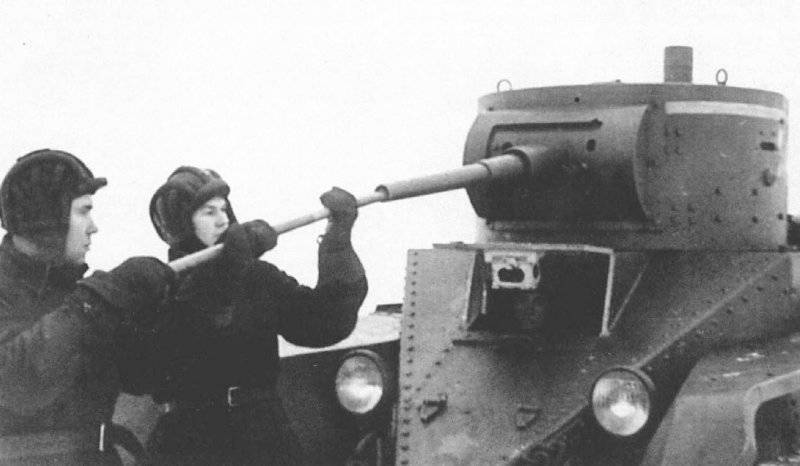 The crew of the BT-5 participants of the "tank-Stakhanovite" competition of the 7 Mechanized Corps of the Leningrad Military District cleans the gun after firing. December 1935

The dislocation of mechanized corps on the eve of the war was advantageous for offensive operations. 6, 11 and 13 mechanized corps were on the Bialystok ledge, 4, 8 and 15 microns were on the Lviv ledge, which allowed in the event of a conflict to strike the flanks of the Lublin group of Germans. The 3 and 12 units were intended for actions against the Tilsit group. The 2 and 18 MC were a threat to the oil fields in Romania. From the north, the 16 th mechanized corps of the 12 th army and the mechanized corps of the district subordination of KOVO hung over Romania. However, the German attack changed the situation - this arrangement of the Soviet troops became a trap for them.

Table No. 3. The ratio of the state-supplied and actually available number of combat vehicles, artillery in the mechanized corps on 13-19 June 1941. 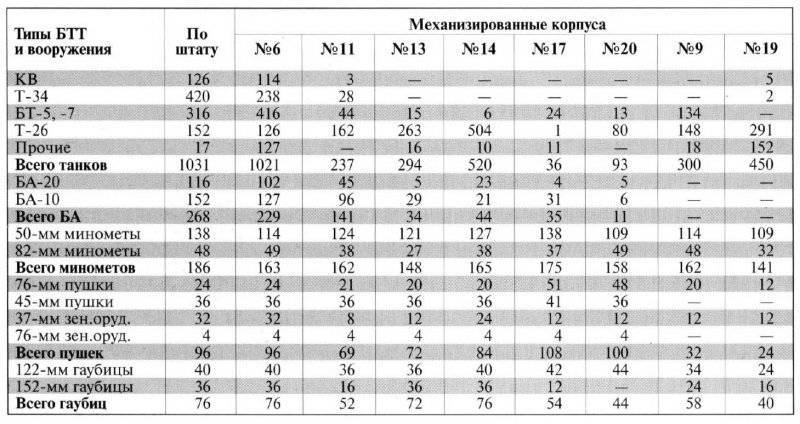 So, 18 MK, located on the territory of the annexed Bessarabia, was literally squeezed into a "corner" between the sea shore and the stretched Dniester estuary. With the release of Romanians and Germans to the Dniester 18 MK would be completely cut off from their own. There was no crossing over the liman estuary that reached 30 km, even floating T-37 and T-38 (more than 130 in the mechanized corps) did not dare to pass through it, and the corps had to retreat almost to meet the approaching enemy. After 100 km march through the sands along the estuary, the corps continued to withdraw, taking the first battle only one month after the start of the war (moreover, in June, the command carried out successful counter-offensive operations on this sector of the front). 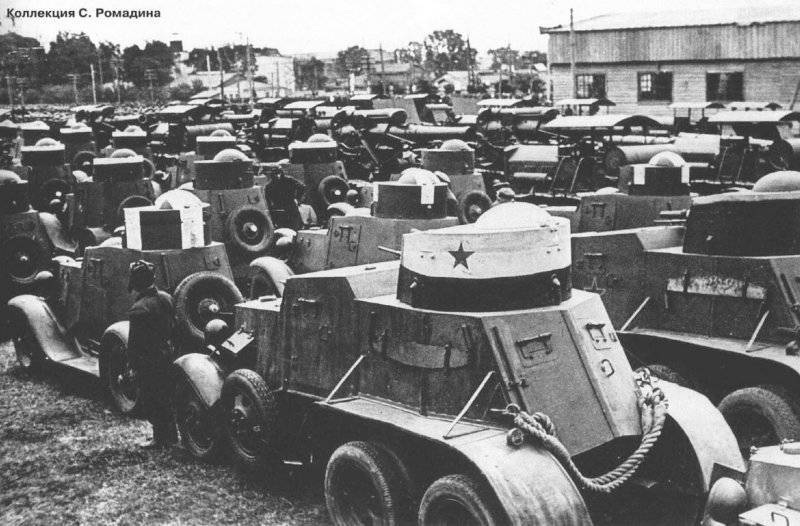 BA-I and FAI armored cars after exercises. In the background are the artillery tractor-tractors "Kommunar". 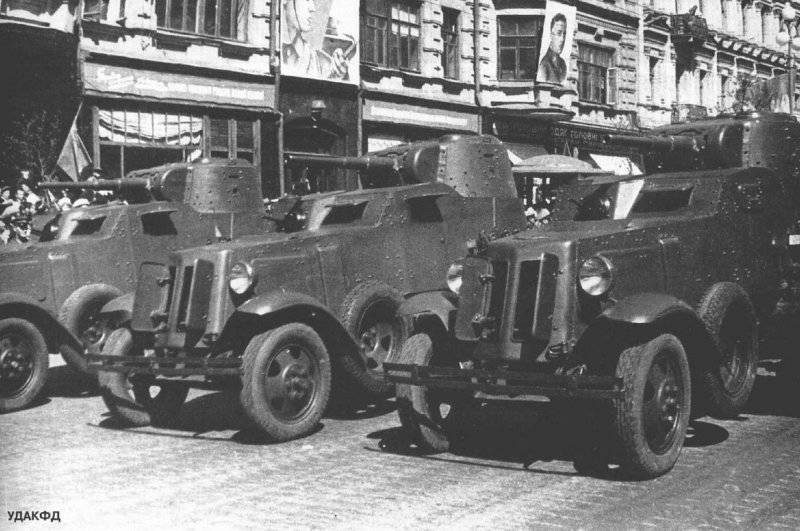