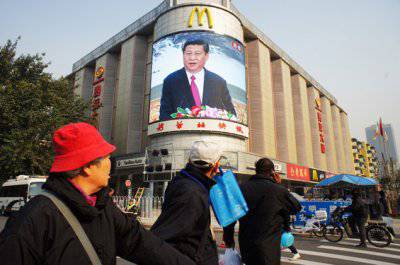 Chairman Xi Jinping and Premier Li Keqiang - the protege of Hu Jintao who left all the posts, who led the new team, will have to deal not only with the strengthening of power, but also to think about the pace of economic growth and not to move the protest moods.


And what they are, Li Keqiang confirmed, noting that due to the red tape in decision-making, business activity is declining, corruption is increasing, the government is losing public confidence.

Recent changes in the Chinese leadership seem to have balanced supporters of former Secretary General Jiang Zemin and his colleagues Hu Jintao.
Hu's supporters are occupied by a number of important posts. Li Yuanchao (who led the CPC organizing department) took the place of the Vice-Chairman of the People's Republic of China, while the other two protégés Hu, Wang Yan and Liu Yandong, will become vice-premiers.

But under the control of adherents Jiang remained the finances of the country. Authoritative financier Zhou Xiaochuan managed to retain the post of the Head of the People’s Bank of China, and the Ministry of Finance was tasked to lead another Jiang supporter, Lou Ziwei, who previously headed the sovereign fund China Investment Corporation and has excellent connections among the world's financial elite.

The foreign policy sphere has also undergone important changes. Supervising the Foreign Ministry, Yang Jiechi took the post of State Secretary for Diplomacy and Security. The Foreign Ministry will be headed by Wang Yi, who was the ambassador to Japan and in charge of affairs with Taiwan and on the Korean Peninsula. This means that now Beijing will intensify the process of negotiations with Taiwan and interaction with Japan.

Relations between Russia and China are not complicated by political problems, and there are opportunities for development in practical terms, which will increase the volume of trade, it was said on Sunday, Premier of the PRC Li Keqiang.

He further noted that the establishment of business relations between China and Russia, the growth of consultations and joint actions on regional and international affairs, will not only strengthen bilateral relations, but also help preserve peace and tranquility in the regional and global dimension.

However, the priorities of the new government will be focused not on foreign policy, but on affairs in China itself. The annual increase in GDP is falling. In 2012, it was the lowest in the last 10 years - 7,8%. According to forecasts of the State Council this year, it will be 7,5%, moreover, according to Li Keqian, it will have to fight hard for it. To this can be added other structural problems, such as ecology and corruption.

But in China, in contrast to developed countries, there is another systemic problem, and it is connected with the population. So the new authorities of the country have shown that they do not forget about it.

The Commission on Population and Family Planning is disbanded, and its authority is transferred to the Ministry of Health. The strategy in the field of demography will now be dealt with by the commission on reform and development. Birth control and movement along the optimal demographic path is a matter of life and death in a country where more than one child can not have more than one child in a family for more than 30 years.

The authorities are reducing the number of departments to eliminate duplication of authority, transferring about 30% of power functions to public and market structures. Li Keqiang noted that the State Council is now engaged in more than 1,7 thousand issues, which will be cut by one third.

He also said that the new government will have to undertake management reform to eliminate a number of formalized functions and transfer them to public structures and market mechanisms.

So, the Ministry of Railways is disappearing, where large-scale corruption due to the infrastructure boom has spread in zero years. Two years ago, for this luxury, they arrested Minister Liu Zhijun. Some of the railway affairs will be handled by the Ministry of Transport, the other - the newly created State Railway Corporation. It should attract large-scale private investment, as well as restructure the payment of 2,3 trillion. yuan debt. Many of its non-core assets will be transferred to the regions.

The state electricity commission and the national energy administration are united, where the fuel and energy sector strategy will be decided (in this sector, state subsidies for tariffs and prices will be phased out).

The new Ministry of Food and Drug Administration will have to strictly control the market, constantly shaken by scandals (the whole world still remembers the "melamine" business with baby powder milk).

In short, in China they want to raise the role of the market and society and make them full partners of the authorities. Such a thought follows from the words of the head of government. Isn't it true that, in contrast to empty speeches about democracy, these two factors can become its socio-economic base?
Army, military restructuring and military doctrine.

The largest army in the world, and now well armed, never fell out of sight of the Chinese authorities. This confirms the meaning of the statements of the Chairman of the PRC and the Supreme Commander Xi Jinping.

So, on Sunday in Beijing, he expressed China’s commitment to peace and cooperation with everyone, but at the same time called on the army to always be ready for victories in wars. And speaking to the deputies, he said that the PLA and the armed police must obey the orders of the party, win wars and contribute to a strong army. It should be better in fulfilling its mission to ensure the protection of the country, its interests, to protect the life and property of the people. The new leadership of China intends to support its words about the army with deeds. Thus, China's maritime services will be united and subordinated to the State Maritime Administration. This decision is caused by territorial disputes between China and its sea neighbors. There will also be one government the news, cinema, television and radio broadcasting to strengthen the CCP’s control over the media amid growing social discontent.

Reliance on tradition and the search for new paths is a new tradition.

The “Chinese dream”, which Deng Xiaoping once formulated as “socialism with Chinese characteristics”, was announced by the new Chinese authorities as the main slogan of the national idea of ​​the Celestial Kingdom. Xi Jinping said that in realizing the “Chinese dream”, one should also think about the national spirit of China, which is based on patriotism. And there is a place in it and the spirit of the times of implementation of the reforms, which proceeded from the movement in the direction of national revival, building a great country. From his words it becomes clear that in implementing this idea, one must follow the Chinese way, which is equivalent, in essence, to the way of socialism with Chinese characteristics. The chairman of the People's Republic of China reminded us of 170 years, which separated us from the times of the first Opium War, the entire five thousand years of Chinese civilization. Thus, he declared that an unprecedented creative force is inherent in the Chinese nation, if traditions are not forgotten and the search for new ways continues.

Ctrl Enter
Noticed a mistake Highlight text and press. Ctrl + Enter
We are
Strangulation: the context, conduct and consequences of the American naval blockade of ChinaTransfer of power in Chinese, or Hu from Mr Xi?
5 comments
Information
Dear reader, to leave comments on the publication, you must to register.