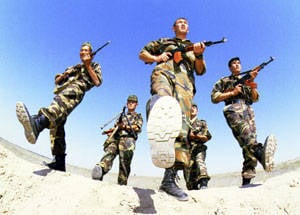 The Armed Forces of the Republic of Kazakhstan (RK) were established by decree of President Nursultan Nazarbayev of 7 in May of 1992. They are based on ground forces, air defense forces and naval forces. In addition, the military organization of the state includes other troops and military formations, the total number of which is close to the army.


The Kazakhstani armed forces were created on the basis of military objects deployed on the territory of the Kazakh SSR, formations and units of the Central Asian Military District of the Soviet Union. Independent Kazakhstan went to the army, which numbered about 200 thousands of personnel and had modern strategic weapons and powerful arsenals of conventional weapons.

15 May 1992 Kazakhstan, together with Armenia, Kyrgyzstan, Russia, Tajikistan and Uzbekistan, signed the Collective Security Treaty.

In 1992, the republic abandoned nuclear weapons and it was decided to withdraw strategic weapons to Russia. 13 December 1993 of the year The Supreme Council of Kazakhstan adopted a resolution “On accession to the Treaty on the Non-Proliferation of Nuclear Weapons”. In February-April of the 1994, all the nuclear warheads and Tu-95MS bombers were redeployed to Russian territory.

The system of fundamental views that determine the policy of the Republic of Kazakhstan in the field of defense security is presented in the military doctrine. The first is approved by presidential decree 11 February 1993 of the year, the second - 21 March 2007 th, and now the current 11 October 2011 th. The military doctrine of Kazakhstan is defensive in nature. Consistent commitment to peace is combined with a determination to protect national interests and guarantee the country's military security.

The document states that the military security of the Republic of Kazakhstan is ensured by pursuing a policy of cooperation and good neighborly relations between countries, their equality and non-interference in each other’s internal affairs, the peaceful resolution of international disputes, the refusal to use the first armed force, and the strengthening of the state’s military organization forecasted threats, identifying and using the most effective forms and methods for neutralizing them.

As part of the implementation of the directions defined by the doctrines, a significant amount of measures have been taken to ensure military security, improve the military organization of the state, and build few but technically equipped and highly mobile armed forces.

The current version emphasizes that the range of military and military-technical cooperation with Russia, China, the United States and other states is expanding in the interests of strengthening national and regional security. The document lists possible external threats: