March 23 2013
14
Nowadays it’s hard to imagine a person who would like to challenge the role aviation on the battlefield. The experience of local conflicts in recent decades shows how effective aviation operations are in the fight against partisan and rebel armed forces.


In Afghanistan, our special forces developed a number of tactical techniques that made it possible to successfully fight against the Mujahideen. One of these techniques was the so-called "inspection actions." Although a more accurate name - flyby area of ​​responsibility. In essence, the overflight is the search actions of the reconnaissance group, which are conducted by patrolling helicopters in the area of ​​responsibility of a special-purpose unit in order to prevent the free movement of militants and their vehicles. As a rule, such actions were carried out in the daytime, since the helicopters were not equipped with special equipment, and the crews were not trained to sit at night on an unprepared platform. In addition, during the dark hours of the day, a curfew was in effect, and the combat helicopters that took off for a free hunt, finding any vehicle, could destroy it without inspection. 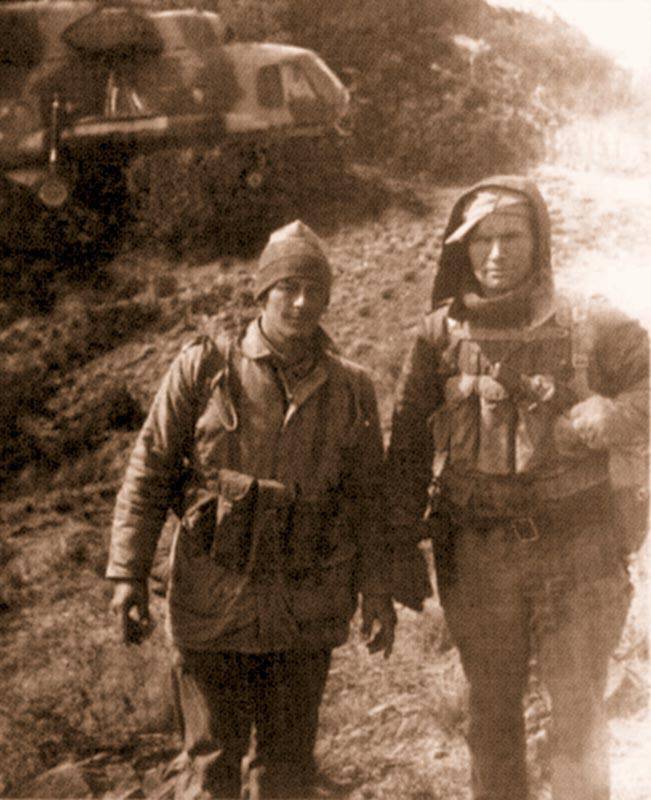 Helicopter landing on a limited area in high mountains

To make overflights by order of the unit was appointed one of the special forces. Her numbers ranged from 12 to 18 people. Armament and equipment - according to the state: machine guns, machine guns and surveillance devices. Ammunition took so much that was enough for a short battle. For communication within the group and with helicopters, the special forces had VHF radio stations, as well as signaling means, allowing them to identify themselves and give target designation to the “turntables”. However, experience has shown that ammunition is sometimes needed no less than when conducting ambush actions, and the radio station that provides a stable connection with the Center is not superfluous.

The group flew at least twice a day. The time was chosen arbitrary, but preference was given to morning and evening hours, when the opportunity to detect the enemy was greatest.

The route of the flyover to the group commander was determined by the headquarters on the eve of the forthcoming actions. Having clarified it, the commander asked the head of the intelligence information about the enemy in the area of ​​patrol. Outlining the dangerous areas where a meeting with the enemy is most likely, he planned high-altitude flight mode. After that, he set the task for the subordinate: at what time the group should be ready for landing in helicopters, who flies in the lead and who in the slave car, the procedure for leaving the helicopters, working and spare frequencies, call signs and signals, as well as the high command side . The commander himself took place in the pilot cabin of the lead helicopter. He coordinated the flight route and his high-altitude regime with his commander, indicated the areas of the most likely meeting with the enemy and his air defense zone, clarified the working frequencies and call signs, identification signals and target designation.

When circling, helicopters usually had the following order of battle. In front was a pair of Mi-8 with an inspection team on board, and behind it and a little to the right - a pair or a link of Mi-24 helicopter fire support helicopters. Having found a suspicious vehicle, the group commander, through the commander of the helicopter crew, gave the command to the twenty-fours to enter the target and give a warning turn. As a rule, the situation cleared up after that. A car with "spirits" accelerated, barely hearing or seeing the "turntables", while the militants themselves opened fire. In this case, Mi-24 began to work to defeat the enemy. Depending on the situation, the group commander decided to sit on one or two sides to inspect vehicles. While the Mi-24 continued to "process" the Mujahideen, the "eight" landed no closer than 300-400 meters from the object, in order not to please the enemy.

The first to leave the board were two machine-gunners, who fled thirty meters to the right and left. Choosing a position on the flanks, they covered the helicopter and the exit of the group. Then the rest of the scouts landed, rapidly ran away, organizing a chain of 150 meters along the front, and lay down in twos.

If the enemy did not resist, the machine-gunners took a position that allowed them to simultaneously guard the approaches to the helicopter and cover the actions of the inspection team. With them was the radio operator who maintained contact with the commander of the group, and if necessary could contact the Center. The group rose and moved to the object with a chain, approaching it by 70-100 meters. Here the scouts lay down, maintaining battle order, and the inspection team with the group commander under their cover approached the car.

If the "spirits" resisted, the group commander suggested Mi-24 to them. The commander constantly maintained contact with his own board, and with the commander of the “twenty-fours” link, controlling their fire. For communication, the militia radio stations “Romashka” or P-392 were used.
After completing the task and destroying the vehicle of the enemy, the group consistently returned to the helicopter. At first, the scouts of the seizure group departed, then the subgroup of the cover, and the radio operator, machine-gunners and the commander were the last to board ... 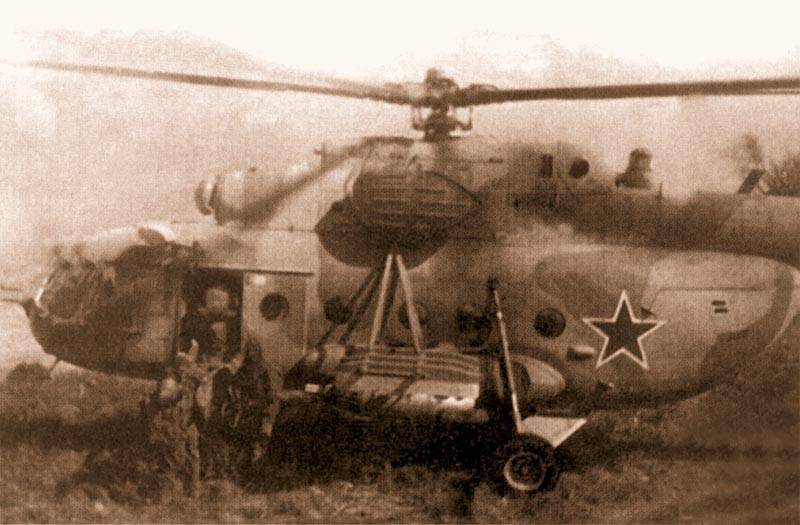 The life of the whole group depended to a great extent on the ability to clearly organize interaction with aviation, since often “turntables” were its only fire support in the area of ​​operations. I think it will not be superfluous to bring the simplest method of targeting aviation to a target. This may be useful today for the special forces who are fighting in Chechnya.

In Afghanistan, a group of special forces, after conducting a successful ambush on a caravan of insurgents, often faced strong opposition from the guards or groups that provided the escort of the caravan. Often under the cover of darkness and with a cover-up of fire, the enemy tried to recapture the caravan. Then the scouts occupied a perimeter defense, and to repel the attack of a superior enemy, they called up helicopter gunships.

Having received a message from the Command and Control Center that the helicopters took off, the commander expected an approximate flight time. Hearing the noise of the engines of the approaching "turntables", he determined the approximate direction on them by compass and added 180 degrees to the azimuth obtained. By contacting the radio with the flight commander, he specified the flight path. When the helicopters approached so much that the pilots could observe the light signals, the fighters lit the flares (in the daytime they used smoke for this). Having received a confirmation by radio that he was being observed from the air, the commander proceeded to target designation. He informed the pilots of a course on the target and the approximate removal. To indicate the direction of the enemy used tracer ammunition. To reduce the likelihood of detection, they fired not by bursts, but by single shots at intervals of 2-3 seconds, then changed position. Further targeting was conducted regarding the gaps and the course of the helicopters. For example: “Air, I am the Earth. Worked to the left of a hundred with a flight of five hundred. " 100 and 500 is the distance in meters.

If the Mujahideen’s opposition was too bitter, the group commander asked the flight commander to call the next pair in advance and make a shift over the positions of the special forces. Air cover should be continuous ...


The Special Forces also closely cooperated with aviation when they were leaving the groups in a given area and evacuating them after completing the mission. Here, too, had its own nuances that are useful to know.

Before departure, it was necessary to coordinate with the helicopter pilots the measures to disguise the landing point of the group. The fact is that the "spirits" quickly understood that the special forces entered the ambush area either on the "turntables" or on the armor. Therefore, as soon as a helicopter landed somewhere, "spiritual" intelligence officers immediately went there. And to avoid detection, the landing site of the group was masked by making false landings.

Before the departure, the officer responsible for the landing indicated to the pilots the flight route, its altitude mode, information about the enemy in the area, the number and places of false landings. It is especially important that the landing of the helicopters for the real landing of the group was made from the first approach to the site. At the same time, Mi-24 should have followed the route further, creating the illusion of continuity of movement of the “turntables” system, and not become “in a circle” above the landing site, as it often happened before.

Groups tried to land in dry riverbeds, ravines and other places that provided stealth landing. The scouts left the "turntables" in a matter of seconds and, putting up observers, lay down before dark. The Eights, after the landing, were attached to the Mi-24 and then made several more false landings. Pilots were categorically forbidden to immediately gain altitude after landing a group, so as not to unmask the special forces.

An equally important stage in the actions of the group was the evacuation after the assignment. Choosing an ambush site, the group commander immediately picked up a platform for the landing of helicopters. He did this in view of the fact that evacuation may take place under enemy fire, which means that the ground must be covered from the direct fire impact of the militants.

Dimensions of landing sites for Mi-8

Many believe that the helicopter is able to sit down and take off anywhere. Far from it. "Turntables" can take off in a helicopter and in an airplane. In the second case, the board is able to lift a greater amount of cargo, but in both cases, a platform is still needed, the dimensions of which are influenced by various factors: height above sea level, air temperature, wind speed and direction near the ground. For example, the minimum dimensions of the landing area and take-off in helicopter in the zone of influence of the earth in the absence of obstacles on the approach should be 50 × 50 meters.

When landing helicopters, the commander first guides them to their location, after which they designate the site with signaling means in any of the following ways: "triangle", "line", "envelope", "rabbit trail", etc. When choosing a site, it should be remembered that the helicopter always sits against the wind.
And finally - about a very important, but controversial moment: who is the main one in the implementation of joint actions of aviation and ground forces. In my opinion, it all depends on who is currently performing the main task. Position and military rank in this situation do not matter. It is stupid if the commander of a helicopter unit in the rank of "captain" begins to indicate to the lieutenant, the commander of the special forces group, which car to inspect, and which one - not. As well as it would be foolish for the commander of the landing regiment to interfere with the control of the helicopter. In any case, you need to look for a reasonable compromise. And if it is not found, then the task will remain unfulfilled, and the lives of many people will be in danger.

Ctrl Enter
Noticed oshЫbku Highlight text and press. Ctrl + Enter
We are
Planning of hostilities of partisans of the western regions of the RSFSRChronicle of the "Afghan war." "Stinger" against helicopters: special forces against "Stinger"
14 comments
Information
Dear reader, to leave comments on the publication, you must to register.