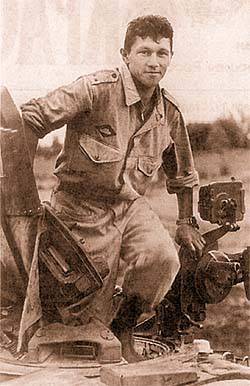 Oh, and "got" the fighters of this tank! Tank- "invisible", as he was called. Nickname is he fully justified! About him legends told. It is as if someone appears from nowhere and disappears unknown where and how. The miss of the gunner-Dudayevist does not know - in an armored troop-carrier from four thousand meters he slammed two projectiles, and so precisely that between the holes in the armor only a palm can be attached. It was impossible to get from a gun to that tank at all ... Invisible, in general.


But there was no mysticism here. As that “seventy-two” and some “Stealth” secrets did not have. Fame tank created the skill of the crew, his ability to completely use the features of the territory where the battles took place.

The fighting in the highlands has its own characteristics. As, however, there is an originality in the war against the backdrop of any landscape. Infrequently the opposing sides in the mountains are on the same horizontal line. As a rule, someone, being lower in height, is the loser.

The division of the internal troops, supported by the tanks of the company of the senior lieutenant Oleg Gafurov, fell into just such a position - Dudayev's troops hung over them, occupying the dominant peaks. This feature of the situation and took advantage of tank gunmen. They took the fighting machine to the firing position in the opposite direction, invisible to the observers of the federal troops, in such a way that because of the height of the high-rise, only the gun barrel and the pointing optics were minimal. So they shot. It turned out that the tank, which was almost invisible to the enemy (read: our gunners and tank crews), could cause considerable damage to the units of the federal forces. And caused! Shoot gunner knew how.

So it was this time. Several fragmentation shells exploded at the very trenches of motorized infantry. Then the Dudayevites brought the fire to the tank Lieutenant Yuri Tamozhenikov standing in the trenches. Hot splinters clattered across their armor. Staying in place became dangerous.

“Start up!” The officer shouted. “Move away!”

The driver was baffled. For him, the young warrior Leonid Belov, it was the first battle.
- Easy, Lyonya!

Where there is calmer! The young soldier, trying to start the engine, completely squandered the compressed air from the receivers and now simply did not know what to do. However, under the breaks, Yuri himself felt uncomfortable. It was obvious that the Dudayevites were shooting at him.

- Get out, Lyonya! I myself ... Pulling out of the arms of the pale soldier, the officer flopped down in his place. The accumulated batteries tried and hard to crank a powerful crankshaft.

Finally the engine roared. The tank trembled and, holding the stern high, moved out of the trench.

... It was at this very moment that the idea of ​​how to catch the “invisible being” probably originated in Yuri's brain ...

The tank moved from the trench. Spitting forward the smoke charge "clouds" (system launch smoke grenades - approx. "Courage"), the combat vehicle under the cover of a dark artificial fog dashingly taxied to the trenches of infantry.

Meanwhile, the tank of Dudayev’s disappeared, as always, imperceptibly, in English. The party and this time left him.
The tank fighters did not yet suspect that Yuri was already considering a retaliatory move.

The platoon reasoned something like this. Having the initial advantage, Dudayevites use it to the full. What can they oppose? What to catch? On the unexpected! What are the militants counting on? What is in defense when firing a natural reaction of a person - to be beaten, to lie low, to close with smoke ... So - it is necessary to do otherwise

And here "invisible" showed itself again. After the first breaks, the Customs officers shouted:

Now Leonid did not disappoint. The tank abruptly pulled back, instantly escaping from the trench. The fighting machine was in full view of the tank militants. But the tank of Dudayev’s ceased to be invisible to Yuri and his comrades. As required!

Shoot in Chirchik Customs officers learned to fame. Yuri first shell released offhand, like a cowboy in a western. Undershoot. Having understood his maneuver, the tank of militants began to crawl back hastily, trying to hide on the reverse slope of the skyscraper. Then Customs officers fired several shells in a row with a canopy through the tip, each time changing the range, but not knocking down the sight. He judged that the bewildered tankers-Dudayevites, trying to get away from the shelling as soon as possible, are unlikely to maneuver outside the visibility of the enemy. And no mistake. After another shot through the thick dusty foam gaps at first timidly, and then thicker puffs of solar smoke began to break through.
More "invisible" in these parts did not appear.

Biography Yuri is the most common. He was born in the Volgograd region, a school, a vocational school, a tank school in Chirchik, near Tashkent, married the officer’s daughter, a service near Alma-Ata ...

“I love the army,” he says. “Therefore, I often recall serving in Kazakhstan. There we really engaged in combat training. And then, when all these sections of the collapse began, the current problems surged. There are not enough people, there are no “goryuchki”, combat training is crumpled up.

To learn to fight during the fighting. Blunted in the first battle, Leonid Belov soon became a top-class driver. I picked up the experience of a gunner gunner Private Nikolai Shumkov. Comprehended a science to win and other soldiers of the division - Senior Sergeant Artem Pritchin, Sergeant Alexander Islamov ...

Experience is a great thing. The only bad thing is that it had to make money directly in battles, and not in the course, as it should be, of combat coordination.

One evening a detachment of militants tried to break into the location of the regiment, which was given a tank unit. When Dudayev’s security guards spotted the alarm and raised the alarm, a voice came out of the battalion commander’s headquarters, Lieutenant Colonel Sergey Kotelkin:
- Hello, combat! Now we will "wet" you!

Warlords like these effects - get in touch with their opponent and warn about an attack. Special chic - if this can turn by name.

And Customs officers with his tank, of course, already on the "front" - brought the car to the firing position after the first shots. According to him, and fell the first rocket grenade. I was lucky - the militants who sat down in the “Zelenka” missed a bit. The explosion took off a cloud of dust from the parapet. Yuri felt how painfully burned his eyebrow.

Only when the battle was a bit faded, I asked my subordinates to see what was happening with the face. It turned out that a tiny fragment stuck above the eye. Immediately he was picked out of a split eyebrow. A screwdriver.

... Today for Yuri the war is already over. Forever - no one knows. But only the unit in which it serves is derived from Chechnya and located in a new place. And again all the same problems as before. There is no landfill, there is not enough fuel for tanks, combat training is intermittent ... From the "training" replenishment arrived instead of retired young veterans - only three times sat "young" at the controls ... And they need to be trained so that if they had to lead the subordinates back into battle, they learned the science of victory with lesser victims.

About Yuri in part say differently. One of the officers said something like this: we have and more, they say, are worthy, at Tamozhenikova, they say, is obstinate character. Maybe you are right. But, whatever the character of Yuri, he was the one who caught the “invisible tank”. And a fragment from the wound during a battle was picked out by a screwdriver to him. But what about obstinacy ... Let us recall the legendary Marinesko - and forgive Yuri this drawback.

Recently, the son of Yuri Nikita was three years old. What fate awaits him, we do not know. One thing is certain: he happened to be born the son of a real officer.