And again about revolution and counter-revolution 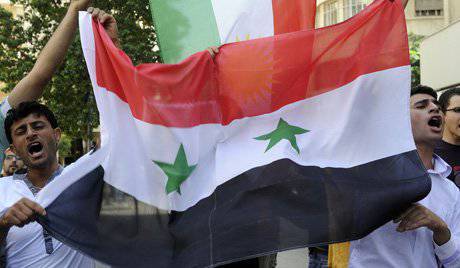 These days - several bloody anniversaries connected with the so-called “Arab spring”. 15 March 2011 - the beginning of a conflict-inspired conflict in Syria, unrest in the city of Daraa. The fact that the world media hastened to christen “revolution. 17 March 2011 - Adoption of the UN Security Council resolution 1973 number on the introduction of the so-called "no-fly zone" over the Libyan Jamahiriya. And, as a result, 19 of March is the beginning of the NATO barbaric bombardment of Libya, again, ostensibly in support of the “revolution”.


A little earlier, 8 in March, Syria celebrated the 60 anniversary of the present 1963 Revolution, which resulted in the Arab Socialist Renaissance Party taking power. This revolution was a big step in the development of the country and the identity of the nation, served as a stimulus for Soviet-Syrian relations. Many villages have become cities. Free education and medicine appeared in the country. Infant mortality has decreased, the population has increased significantly. It should be noted that this revolution in Syria took place in a peaceful way (just like the true Libyan revolution of the year 1969). But in our years in both countries there are counter-revolutions, which have flooded their lands with blood.

“Back to the Middle Ages,” it was precisely these words that pseudo-revolutionaries in both countries could have written on their black banners. What hinders for this? Infrastructure? Down with her! In Libya, its facilities were destroyed by NATO troops from the air, in Syria - by the hands of hired terrorists. People are hindering - scientists, poets, actors, doctors, athletes - get rid of them! And the best national cadres are being killed meanly, from around the corner, bombs are being laid under the bottoms of their cars at night. Who else bothers to throw the country back? Of course, ordinary people who do not want to go into the darkness. And they are killed in terrorist attacks, fired from mortars, attacked peaceful cities and villages ...

The essence of the militants of the so-called "opposition" is clearly visible even in this short episode. A video was distributed on the Internet in which fighters of the “opposition” caught an elderly person in the city of Aleppo. This man became a local celebrity - a harmless eccentric loved to wear all the yellow. He, the father of three children, dreamed of making all people happy and believed that wearing sun-colored clothes could bring him closer to this goal. In the pre-crisis years, the Al-Arabiya TV channel even made a report about it, which now splashes saliva against Syria. And this “solar man” was detained by pseudo-revolutionary militants. The video shows how they beat the old man, humiliate him, pull his hair and mustache, make him say curses. The whole process of trampling on human dignity is filmed for the edification of those whom they consider “government spies”.

The problem with the militants is that in this case they need to declare almost the entire city of Aleppo to be agents of the government. Recently, mass demonstrations of residents took place just a few blocks away, which demanded that the terrorists move away from Aleppo. People carried portraits of the legitimate president and chanted the slogan “Allah, mhaye jeish”, which means: “God bless the Army!” Yes, similar demonstrations in Aleppo were before, but this time they were distinguished by their enormous mass character.

The anger of the inhabitants of Aleppo is caused not only by the mockery of pseudo-revolutionaries over innocent people, but also by the unprecedented barbarity with which the bandits relate to historical the sights that this city was rightly proud of. Already had to write that 7 ancient covered markets of Aleppo were burned, which in the old days attracted numerous tourists, created a unique oriental flavor and were not only ancient monuments, but also a symbol of economic prosperity of the northern capital of Syria. The fact that the Umayyad Great Mosque - the largest in Aleppo - was burned by militants and its southern wall was blown up. This list continues to populate. The historical library of Aleppo city was looted, in which there were more than 750 unique ancient books. It also housed ancient scientific instruments and other relics. Now all this is being sold somewhere outside of Syria and settles in the hands of private collectors.

The revolution is aimed at protecting the common people, above all, the workers and peasants. The Syrian counter-revolution is directed against the workers and peasants. Workers are killed at power plants and other facilities, killed when cleaning the streets, when they honestly perform their work duties, and this had to be written many times. Such cases were in the city of Aleppo, the provinces of Damascus and Homs ...

So how do “freedom fighters” deal with the peasants? This is eloquently illustrated by the incident that occurred on March 16-17 in the village of Umm al-Heyer in the Syrian province of Hasak.

At first, the bandits tried to plunder agricultural objects, warehouses with grain and fodder, however, local peasants opposed this attempt. There was a clash, in which one woman from the village was killed. But they did not let the terrorists rob. The next day, they decided to take revenge on the recalcitrant village and approached him with mortars. As a result of the shelling, 25 people were killed and wounded, 7 houses were destroyed.
Peculiarly, the bandits "celebrated" the two-year anniversary of their counter-revolution in Damascus. This crime is monstrous in its cynicism - 3 mortar shells fired on the densely populated residential area of ​​Al-Bakhtiyar. Two of them pleased the orphanage. 3 people died, 50 injured. Among the victims are many children, including small ones.

The bloody "feast" continues, and the gangsters fired at the Qaboun and Barze quarters yesterday, killing two people and injuring 8.

It is difficult to say what kind of pseudo-revolutionary slogans the criminals managed to bring to their black activities 26-year-old disabled student Hussein Marvan Al-Zoubi, who was arrested by law enforcement officers and gave recognition on the Syrian state television channel. He talked about how he laid an explosive device near the bus station in the village of Somariya.

The young man studied at the Faculty of Law, University of Damascus. The state granted him, as a disabled person, numerous benefits. He studied for free, despite the fact that he did not score the necessary number of points. The state provided him with a workplace, and 50% discount on air tickets, telephone and Internet payments. In general, not only the state, but society also cared for him as an invalid - such people here are constantly trying to help, and, of course, they are above suspicion. That is why the choice of terrorists fell on him when they were looking for the perpetrator of the terrorist attack.
Hussein was given an explosive device. He went to Somaria by bus and put his luggage under the seat - in case of a sudden check and search of the bus, he could have said that he had nothing to do with him, they say, he almost became the first victim of the terrorist attack. Arriving at the bus station, he found an opportune moment and stuck an explosive device under one of the many cars parked near the building. Then calmly, as if nothing had happened, he went to work. Another terrorist, having waited until his “comrade-in-arms” leaves, has detonated an explosive device.

It would seem that a person who has numerous benefits from the state (which, by the way, became possible precisely because of the long-lasting and true March Revolution 8), should not avenge him, it is not clear why. It would seem that a law student should be aware of how his actions comply with the law. It would seem that a disabled person should understand that he is waiting for other people who, as a result of the terrorist act committed by him, may remain disabled for life. But for some reason none of these considerations stopped the young terrorist.

This once again clearly shows that the pseudo-revolutionaries are completely alien to moral principles. We can say that they are not related to humanity at all.

Meanwhile, France and the UK are even ready to go against the European Union, just to realize the intention to arm these terrorists. Hollande and Cameron are trying to speed up the discussion in the EU of the question of lifting the embargo imposed by them. weapons to Syria. The fact is that the embargo was imposed against the legitimate government, but now it has become some legal obstacle to the legalization of the supply of weapons to the so-called “opposition”.

There are disagreements on this issue in the EU. Germany and Austria oppose such a move, fearing the growth of the terrorist threat. However, Paris and London declare that they are ready to spit on the European Union and arm the rebels even without this decision. According to them, the only way to achieve "change in Syria." Moreover, against this background, these countries, as well as the US Department of State, strongly urge Russia to completely abandon the supply of defensive weapons to the legitimate leadership of Syria, although, unlike their actions, there are no violations at all.
Valuable recognition, however! In other ways, therefore, the victory of what they call a revolution is impossible. Despite the fact that the militants have already delivered a lot of weapons. How do they fire at orphanages and residential neighborhoods?

Now, those involved in the sale of weapons in these countries already want to fully profit from their bloody business, and they don’t care how many children are disabled as a result of the shelling of the orphanage, how many peasants defending the country's bread have been killed, how many shrines incomprehensible they civilized destroyed. Let more blood be shed, more people will be left homeless, more valuable relics will disappear without a trace, but gun bosses will receive a replenishment of bank accounts. As they say, business and nothing personal.

But I would like to ask those who still believe in the Syrian "revolution" who was not even sobered by the fate of Libya destroyed by the NATO members - what is the use of revolutions made by the hands of bandits and weapons supplied by the colonial powers?

Ctrl Enter
Noticed oshЫbku Highlight text and press. Ctrl + Enter
We are
Bashar al-Assad: In Syria, not the “revolution” that the enemies are talking about, but the revolution of the army and the people against terroristsSyria: Americans scare themselves, and Asma Asad buys chairs
Military Reviewin Yandex News
Military Reviewin Google News
38 comments
Information
Dear reader, to leave comments on the publication, you must to register.