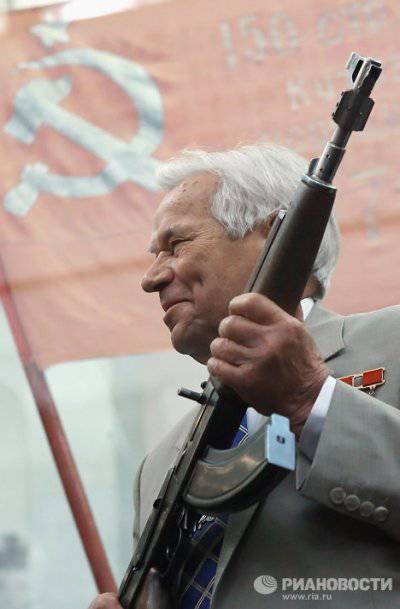 Kalashnikov is the name of a person from Russia. This man more than half a century ago invented and designed an automatic weapon, which subsequently spread throughout the world and became known as the Kalashnikov assault rifle. However, the company where it is produced went bankrupt last spring and is now in the process of restructuring.

Izhevsk is located in the western part of Russia, not far from the Ural Mountains, the population is approximately 600 thousand people. Ever since the tsarist times, this region was famous as an industrial one, and in the Soviet era it became a place of arms production, after which foreigners were banned from entering this “closed” city.

Over the center of the tower towers. In the red building with columns breath is felt stories. This is a weapons factory "Izhmash", which produces a Kalashnikov assault rifle. The territory of the plant is surrounded by a wall with barbed wire. Referring to the observance of the rules of secrecy, we were not allowed into the plant.

Near the enterprise there is a factory museum. We went inside and ran into a group of 10-ti local primary school students who came on the tour. In the shop windows there are exhibited by the factory old models of automatic rifles, sporting guns for biathlon - only a few hundred units.

Everywhere in the museum are photographs of M. Kalashnikov with numerous awards on his chest, state awards for the best weapons, medals. Museum director Alexei Azovskiy (65 years) and he worked for a long time at the plant in the maintenance department. “Our factory is the oldest weapons factory in Russia. I am proud that I was able to work here, ”he says, straightening his chest.

The plant’s management began to lose ground in the past few years. The main product being manufactured - the Kalashnikov assault rifle - lost its competitiveness after the release of more technically advanced samples of American and European production, and the number of orders decreases every year. Having calculated that for the year before last the company suffered losses on 2,4 billion rubles, the workers' salaries were cut down to 10 thousand rubles per month, which is about one-fourth of the average wage in Russia.

The decisive blow was struck when the Russian army stopped its orders. The year before last, this largest customer, with whom they already had almost kindred relations, stopped sending orders, justifying this by the presence of stocks in warehouses and the obsolescence of weapons. After that, many workers left the company.

"Izhmash" was ruined last spring, but the state allocated funds for the restructuring of the enterprise. At the initiative of the Deputy Prime Minister of the Russian Federation, D. Rogozin, the enterprise was transferred to the beginning of the state corporation Russian Technologies, which unites several military production facilities, thus merging Izhmash with other arms manufacturers. The name of this group of companies is also planned to be changed to the world famous brand “Kalashnikov” and try to start everything from the beginning.

“Under the direction of a state-owned company, one can count on international orders,” Alexander Ikmash, interim general director of Izhmash (46 years), who has developed a restructuring plan, inspires confidence in his abilities. However, restructuring a company is not so easy. Now the forces of the enterprise are thrown on the development of a new model of the AK-12 small caliber machine, but it does not go beyond the factory tests for full testing in military units. At best, mass production will take place in five years.

There is also a reverse side of the coin of joining the state group of companies. In a huge organization created by the state, bureaucratic structures from the times of the Soviet Union still remain, their actions are ineffective, as a result of which all deadlines are displaced, the price competitiveness of products is lost due to the low literacy of officials in cost issues, there are other significant problems.

For Russia, weapons are the second most important category of export after gas and oil. Even in the conditions of a decline observed in industry, in the military sphere, Russian products are highly valued on the world market.

At the same time, there will always be those who doubt the need for such a method of excessive centralization. The military specialist Litovkin notes the following: “The merged enterprises are greatly exaggerated, it is necessary to urgently carry out staff cuts, optimize surplus equipment, restructuring is associated with overcoming enormous difficulties.” It’s not so easy to leave old Kalashnikov afloat. ”

An endless stream of fakes

“It's sad. And I just tried to create an excellent weapon to protect the Motherland from Nazi Germany, ”Mikhail Kalashnikov (93), who gave an interview to Asahi newspaper about the fact that he himself created the weapon, began to use in all armed conflicts in our the planet.

One of the military experts explains that the worldwide distribution of the Kalashnikov assault rifle was not only easy to use, but also the fact that the USSR distributed this weapon free of charge to the right and left.

In its opposition to NATO, the Soviet Union allowed the production of Kalashnikov in the allies of the Warsaw Pact in Eastern Europe, without taking any interest on the license. At that time, it was called help "brotherly country."

After the collapse of the Soviet Union, these special contracts came to an end, after which some countries began to pay for the use of a license, but almost all the funds began to flow into the state budget of Russia, and not the Izhmash company. In addition, there are still countries that continue to produce automatic without any extension of contracts after the collapse of the USSR.

There are a lot of complete fakes of the Kalashnikov assault rifle because of the simplicity of the design. Therefore, the bankruptcy of the original developer and manufacturer does not mean the disappearance of his main child from the scene of armed conflict around the world.

Ctrl Enter
Noticed a mistake Highlight text and press. Ctrl + Enter
We are
The Second Breath of the Black KnivesConcern "Kalashnikov" will be presented in Izhevsk
62 comments
Information
Dear reader, to leave comments on the publication, you must to register.