March 19 2013
28
The F-111 is the world's first serial combat aircraft with a variable sweep wing, turbojet dual engine, equipped with an automatic relief system. Start stories This aircraft belongs to the 27.03.1958 year, when the US Air Force issued requirements for a vertical / short takeoff / landing fighter, the maximum speed of which was more than twice the speed of sound. A year later, the Air Force, realizing the unreality of the task, changed some of the requirements. In particular, we have already talked about shortened takeoff / landing. However, the requirements included a new requirement: to get low-altitude flight. The aircraft was intended to destroy ground targets using both conventional and nuclear weapons. He was called the "fighter", although in fact he was a fighter-bomber, the main purpose of the new aircraft was to isolate the combat area, and also to replace Republic F-105 aircraft in this role.


Contradictory requirements for the car could be satisfied only by using a variable swept wing. Such a wing in a fully deployed position reduces the speed of take-off / landing, and reduces the length of the run-up / run. At the maximum angle it allows you to make a high-speed throw near the ground or to develop a maximum speed at a high altitude. In the intermediate positions of the variable sweep wing, it provides fast acceleration, prolonged loitering in the zone and long range. Thus, the aircraft is provided with multi-mode. 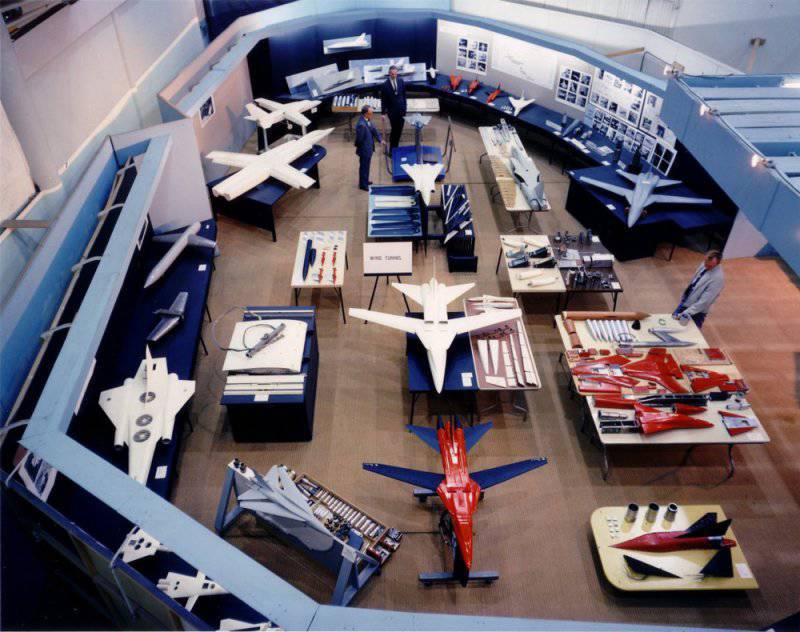 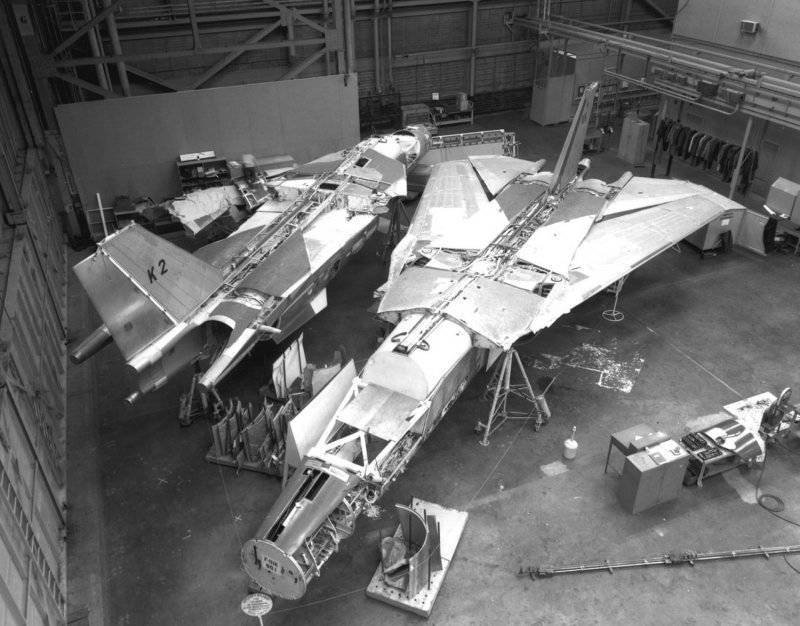 Leading American firms and research centers took part in creating the base F-111. The head of this work was the company General Dynamics, auxiliary - Grumman. These companies created the aircraft and organized its construction, as well as led by ten other companies developing sighting radars, automatic weapons and flight control systems, as well as other systems.

At the Edwards airbase, the NASA flight research center for the aircraft studied the wing and made recommendations for its design and construction. After that, the wing was tested for strength at another Wright-Petterson airbase.

As a result, spending on the development of an experimental aircraft F-111A 25 million man-hours, of which 21 spent a thousand pipe-hours for testing in wind tunnels, having invested 1,2 billion dollars in these X-NUMX works. wing. Flights of aircraft with variable wing geometry began in January next year.

In the US Air Force, the serial F-111A arrived in 1967 year. This program for the construction of combat aircraft was the largest after the Second World War. 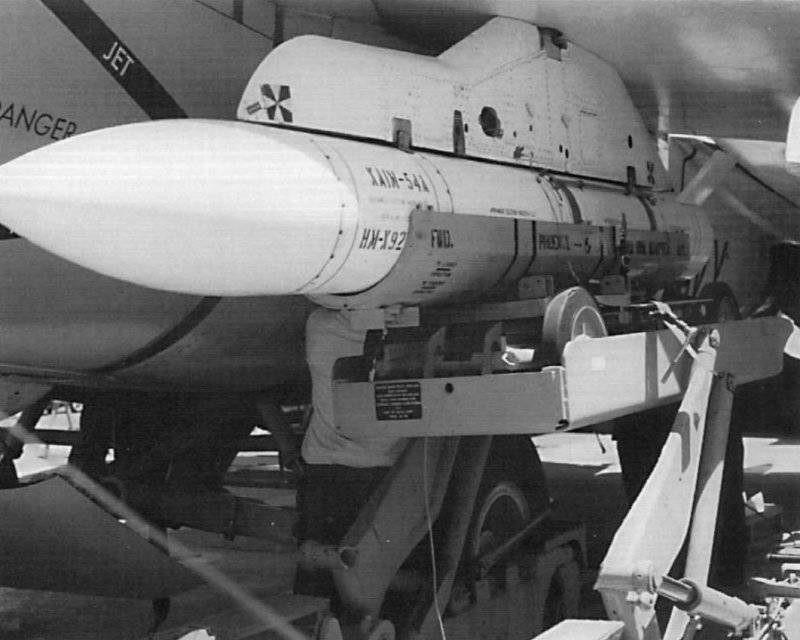 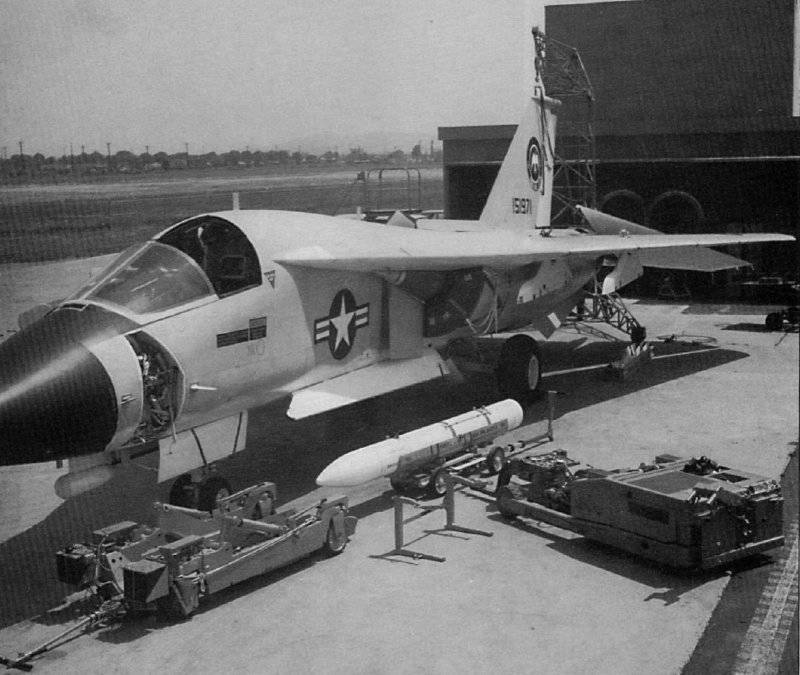 The layout of the F-111A basically corresponded to the scheme that was proposed by NASA - a high-wing aircraft with a variable sweep wing. In the rear part of the fuselage there are two turbojet dual engine. The fuselage of a semi-monocoque aircraft. The main strength element of the structure is a T-shaped beam. Pilot's seats in the double cabin are located nearby.

The main structural material of the fuselage is an aluminum alloy 2024-Т851. In the manufacture of some of the most loaded sites, steel and titanium alloys were used. The skin of the keel and caissons of the wing are machined aluminum panels, the rest of the skin is 22-millimeter aluminum laminated panels with honeycomb core.

The wing is four-spar. Wing profile - NACA-63. The covering of the planes of the wing is working, milled. The wing mechanization consists of Fowler double-slit flaps and slats, flaps deviate if the sweep angle does not exceed 26 degrees. The slats deviate only after flaps are released at an angle of 15 degrees. The wing hinges are located approximately on the 25 percent of the end chord of the fixed part. The hinge fits into the wing, which has a slight bulge at the location of the hinge. 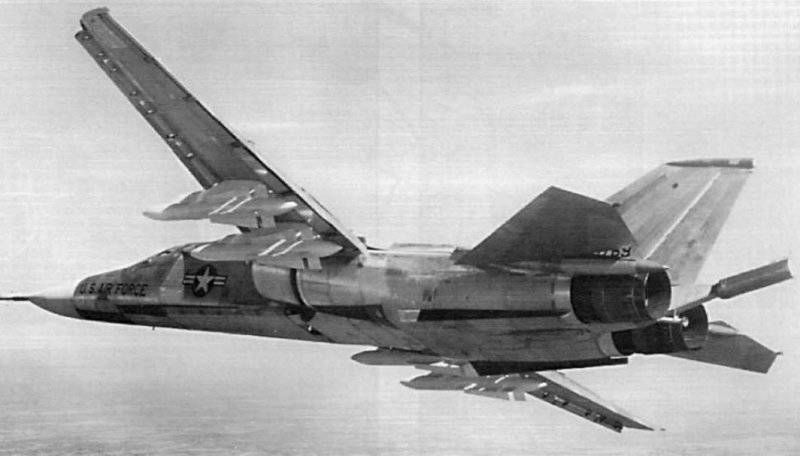 The sweep angles of the modem will vary in the 16 range .. 72,5 degrees. The wing can be fixed in any intermediate position, however, the following positions are considered “regular”: take-off - 16 °, cruising at subsonic speeds and landing - 26 °, cruising at supersonic speeds - 50 °, flying at maximum speed - 72,5 °. The sweep change mechanism is a monolithic steel beam with a length of 4,3 meter, tapering towards the ends, where the axles of the hinges of the attachment of the movable cantilevers are located. The mechanism eliminates the asymmetric sweep change.

The cockpit (starting with the 12 instance) is a single rescue capsule that is separated from the aircraft using a linear cumulative charge. The position of the seats is adjustable in three axes. The ejection of the cabin can be made not only at low altitude, but also from under water from depths to 15 m. The width of the cabin is 1520 mm, the main radar and navigation indicators are located on the dashboard on the right side, flight-navigation instruments - on the left. Cabin lantern - double. For each member of the crew there are individual fold-up flaps. The cabin is supplied with a screen that automatically opens during a nuclear explosion to protect the pilots from the heat and light effects of the explosion. 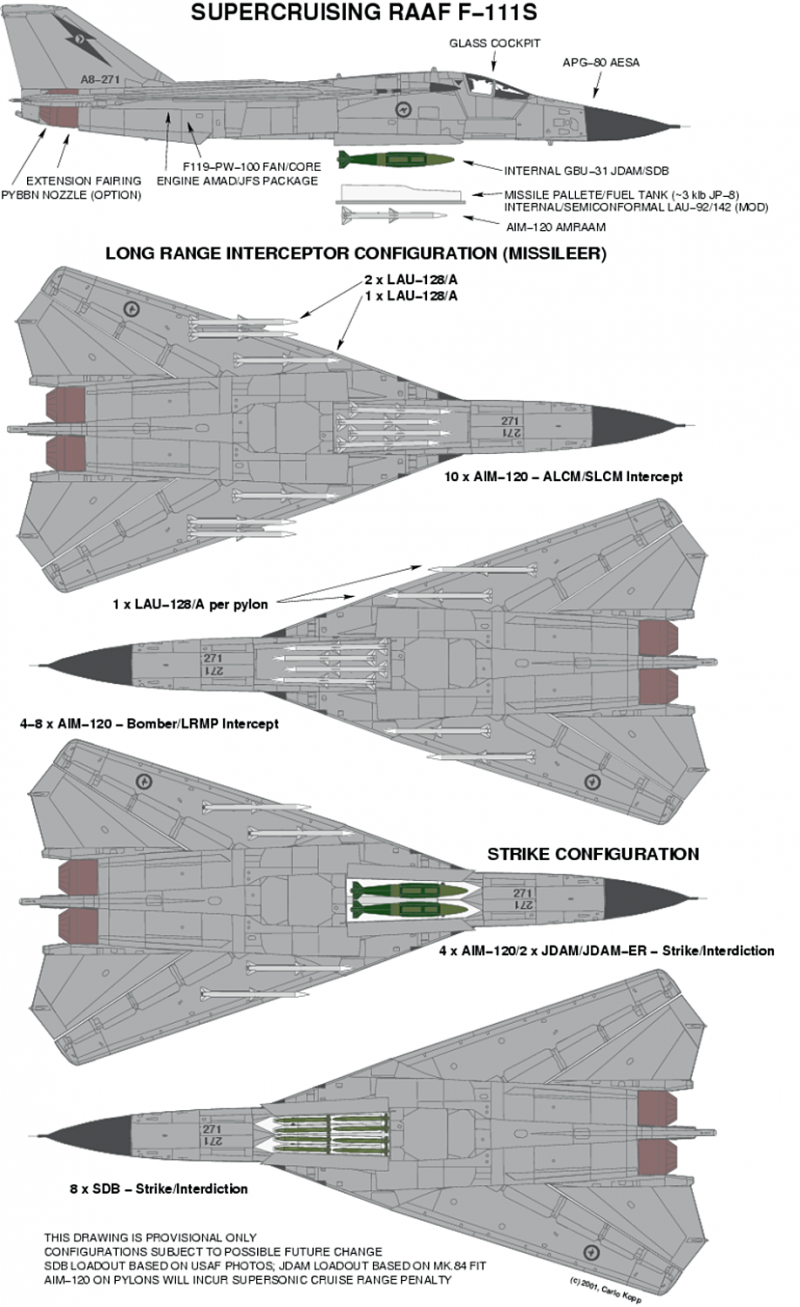 Under the flight data of the F-111A Aardvark fighter-bomber, Pratt-Whitney developed the TF-30 twin-turbojet engine. A variant of this engine was developed by the French company Snekma. Two TF-30P-1 engines were installed on the aircraft. Takeoff thrust of each engine without afterburner was 8165 kg, with afterburner - 13600 kg. The bypass ratio of the engines is 1,3. The TF-30P-1 engines were installed on prototypes and the first 30 F-111A Aardvark production aircraft. Nozzles - ejector type. To start the engine from an external source was supplied compressed air. To start the second engine, compressed air was taken from the compressor of the operating engine.

The fuel is placed in a tank located in the compartment of the keel, tanks of wing consoles and a pair of fuselage tanks. The capacity of the internal tanks was 19050 l. Under the wing on the pylons, the possibility of suspension of 6 additional fuel tanks, the capacity of which is 2270 or 1700 l. Behind the cockpit on the top of the fuselage is a fuel receiver bar for refueling in the air.

The integration of the electronic F-111A board was carried out by the Autonetics company. A set of avionics equipment received the designation Mk.l. A feature of the system was the presence of two radars - two-channel radar AN / APQ-110 and Texas Instrument and a radar AN / APQ-1 13 General Electric. AN / APQ-1 13 is used to detect and track aerial targets and has a “navigation” area mapping mode. Radar antennas are located under the radio transparent fairing in the forward fuselage.

To place weapons under the wings there are six pylons, designed for loads weighing up to 2250 kilograms each. Two extreme - fixed, can only be used with a fully deployed wing; these pylons needed to be dropped before the flight began at high speeds. When the wing sweep changes, the four inner pylons rotate. 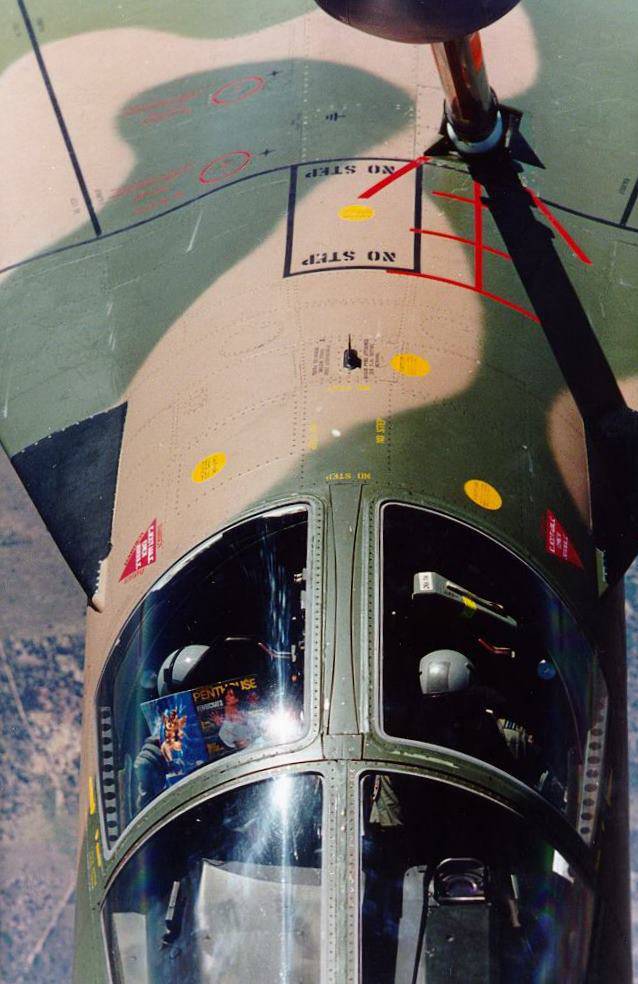 On pylons, 340-kilogram M117А1 bombs can be hung up or on holders with forced dumping of GBU-58 cluster bombs, or one 900-kilogram bomb of Mk.82 and 1350-kilogram Mk.83. The suspension of Peywei guided bombs equipped with advanced semi-active laser GOS, or guided Rockwell GBU-15 to destroy various targets (launching powerful missiles, airfields, bridges, radars, aircraft hangars and ships), as well as isolation of the battlefield are possible. For self-defense on the plane can be installed guided missiles AIM-9 "Sidewinder".

Between the main niches and the nose landing gear there is a weapon compartment having a length of 5 meters. It houses a special combat load (dipole reflectors and nuclear B43, B57 or B61 nuclear bombs). Apart from this, reconnaissance equipment can be placed in this compartment. On the F-111, a six-barreled 29 mm gun, the M61 Volcano, has a 6000 gunfire per minute rate of fire.

The first serial F-111 for the first time flew into the air 12 February 1967 g. In the period from 1964 to 1976, 562 aircraft of various modifications were built. F-111A Aardvark was adopted by the American and Australian Air Force. In addition, Britain wanted to buy a batch of these multipurpose fighter-bombers, but later the Royal Air Force abandoned these plans. 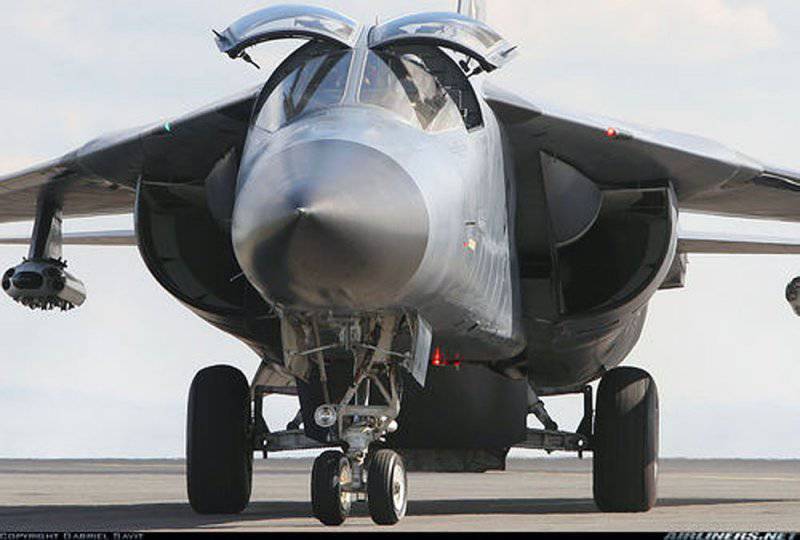 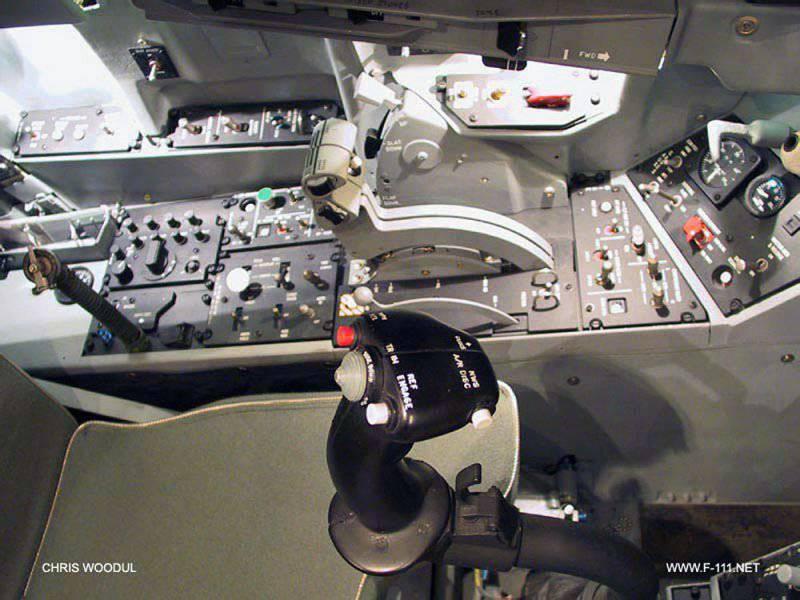 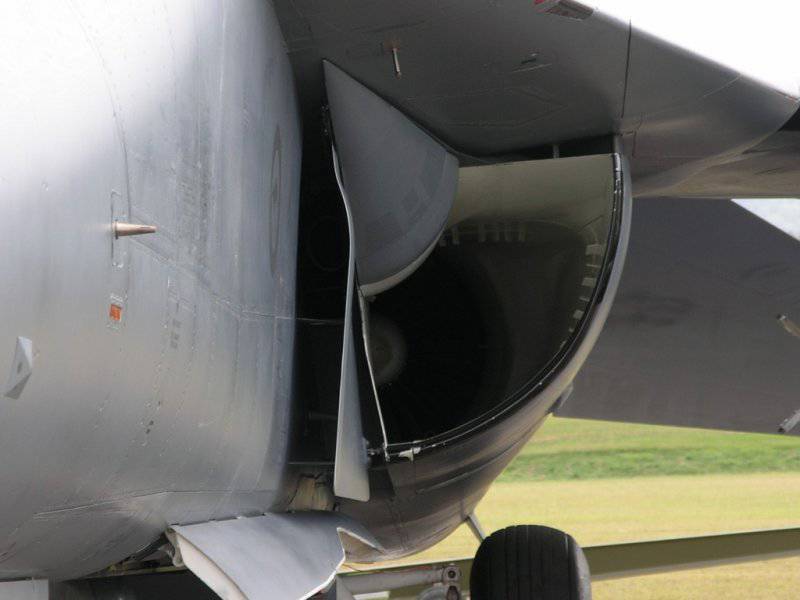 The F-111A, just five months after the start of series production, took part in the fighting in Vietnam. For example, in Operation Combat Lancer, the fighter acted completely autonomously, as envisaged by the tactics developed for it. Even the flight to Thailand was carried out using only an inertial onboard navigation system without refueling, although with intermediate landings - at the time for a tactical aircraft, this was a significant achievement.

During the sorties, the radio silence was maintained, and therefore the exact causes of the death of the first two aircraft remained unknown.

In the last months of the Vietnam War — September 1972 — February 1973 — the F-111 aircraft were deployed a second time at Tahli base. It was carried out more than 4 thousand sorties. Of the 52 aircraft involved, six were lost. The F-111A fighter-bomber in field conditions demonstrated high reliability: the flight cancellation rate was only 0,85%, each crew made 45 to 53 sorties. The fundamental difference between the aircraft was the ability to follow the terrain and reach the target with high accuracy, which allowed us to “blindly” “put” conventional uncorrectable ammunition right on the target from the first approach. As a rule, F-111А carried from 12 to 16 bombs or bomb cassettes in 227 caliber and 340 kilograms, and occasionally 907 kilograms. More than 98 percent of all departures took place at low altitudes, on the mode of following the terrain. American pilots called such a flight “ski races”. 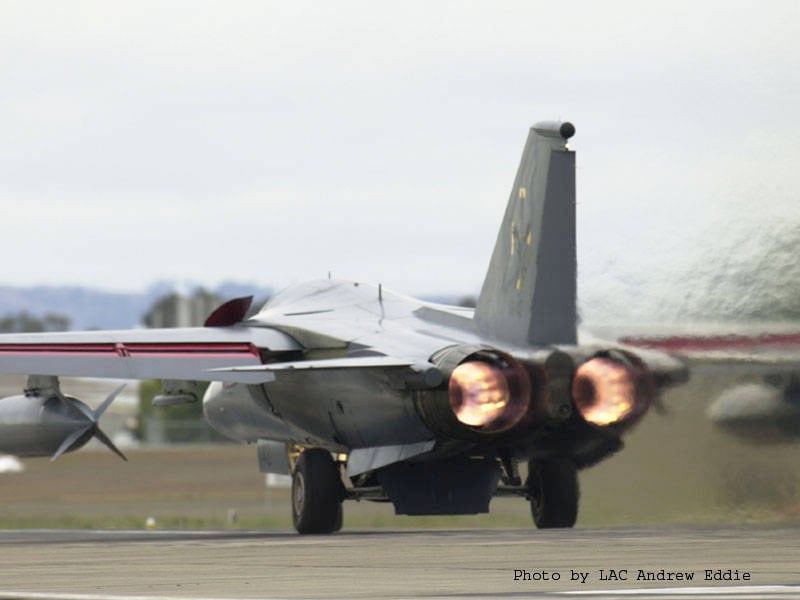 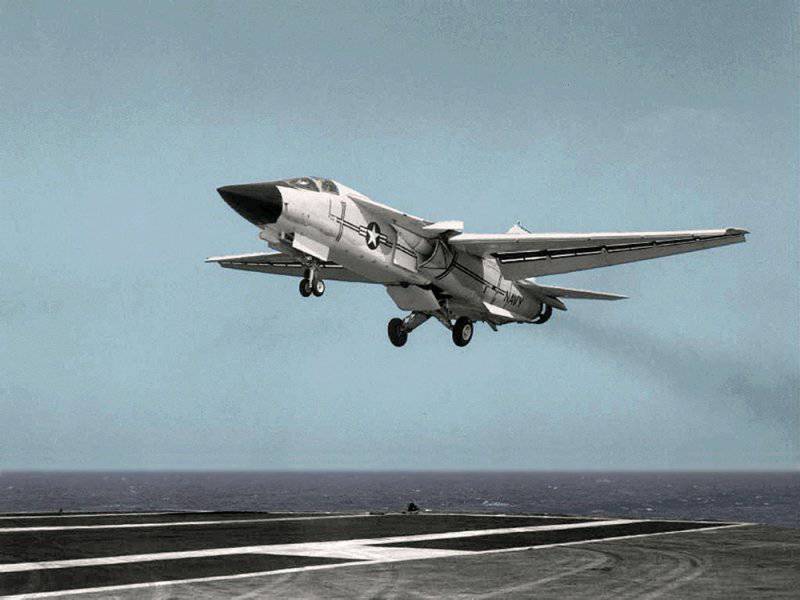 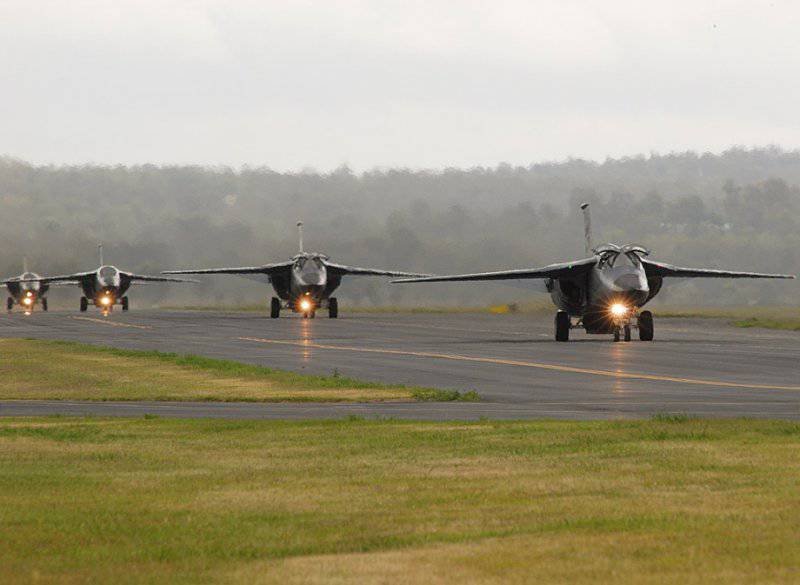 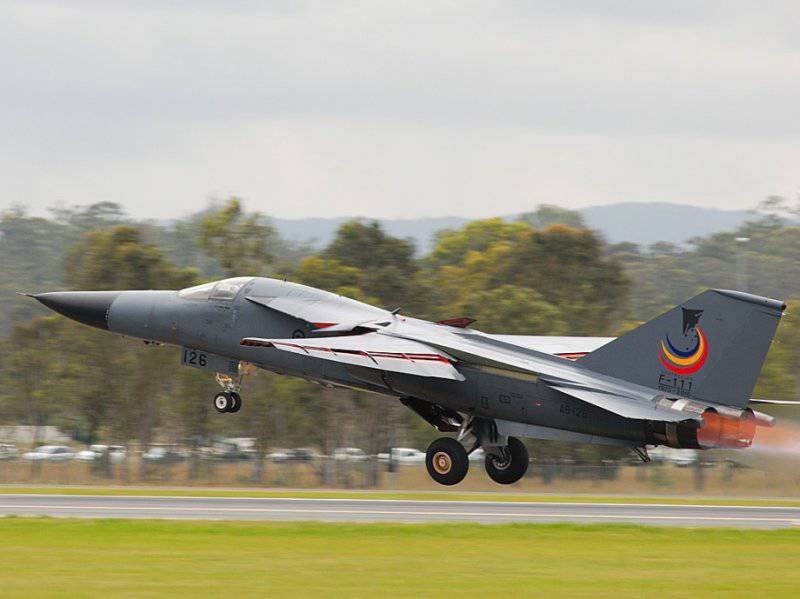 F-111A is a double tactical fighter-bomber. Equipped with two engines Pratt-Whitney TF30-P-3 kg 8391. It was built 158 machines, 18 of them were experienced and pre-production. The first flight of the first production copy took place in June 1967.

The FB-111A is a double bomber designed for the Strategic Aviation Command of the US Air Force. The machine has increased wing span by 2,13, reinforced chassis, increased fuel capacity. Equipped with engines TF-30-P-7 (thrust 9185 kg). In the United States, at the end of 1965, it was decided to build 263 FB-111А to replace the B-52C, D and F and B-58А strategic bombers. The capacity of the fuel tanks - 21243 L (including tanks in the bomb bay). Used navigation bombing system Mk.2B. produced by 76 machines.

RF-111A - reconnaissance modification, equipped with a removable sensor element. Passed the test, but not in production. 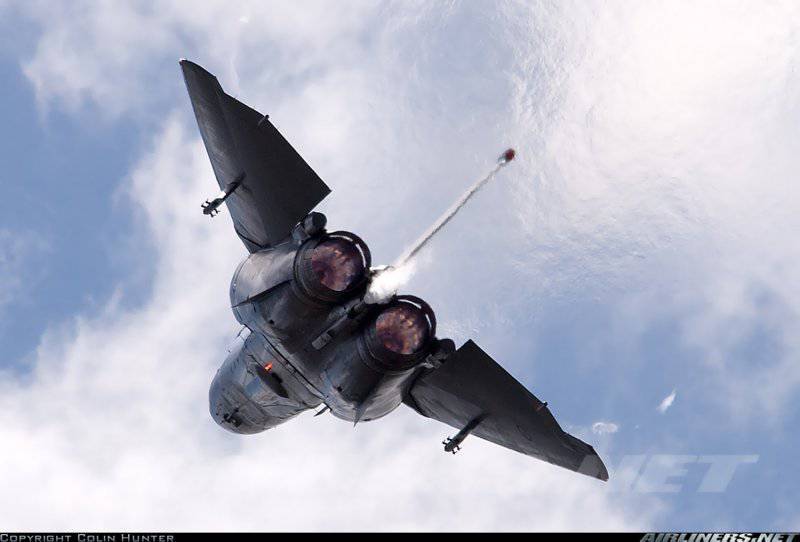 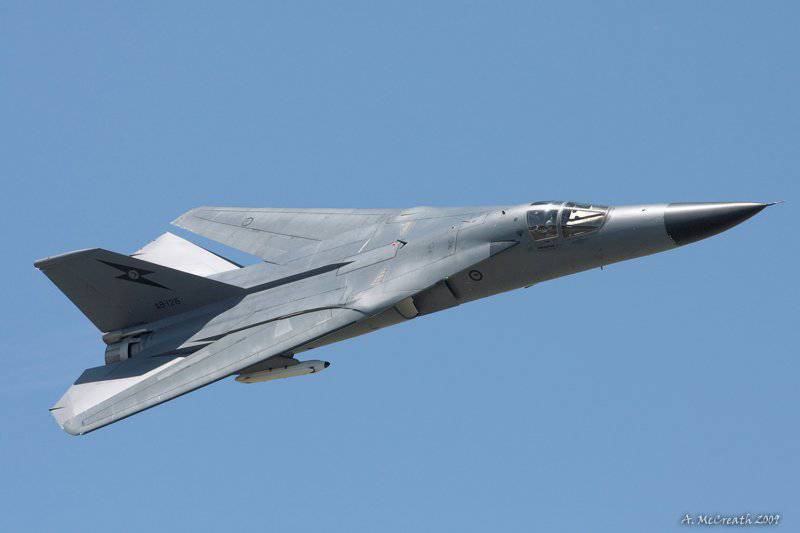 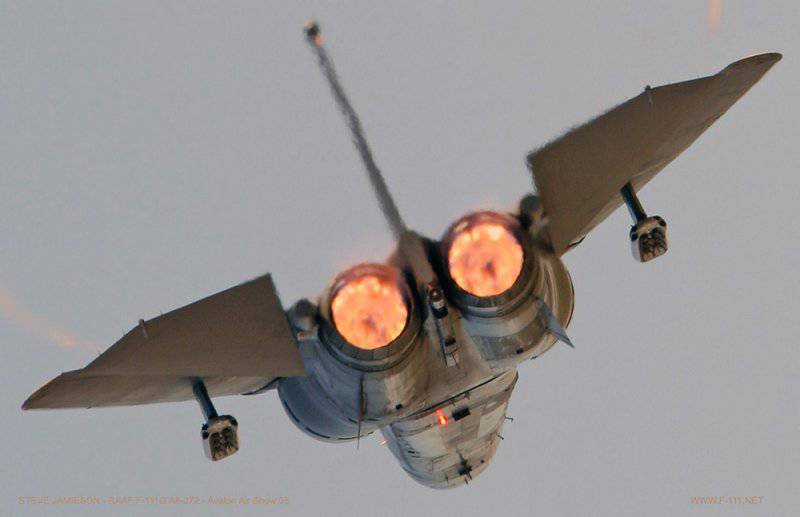 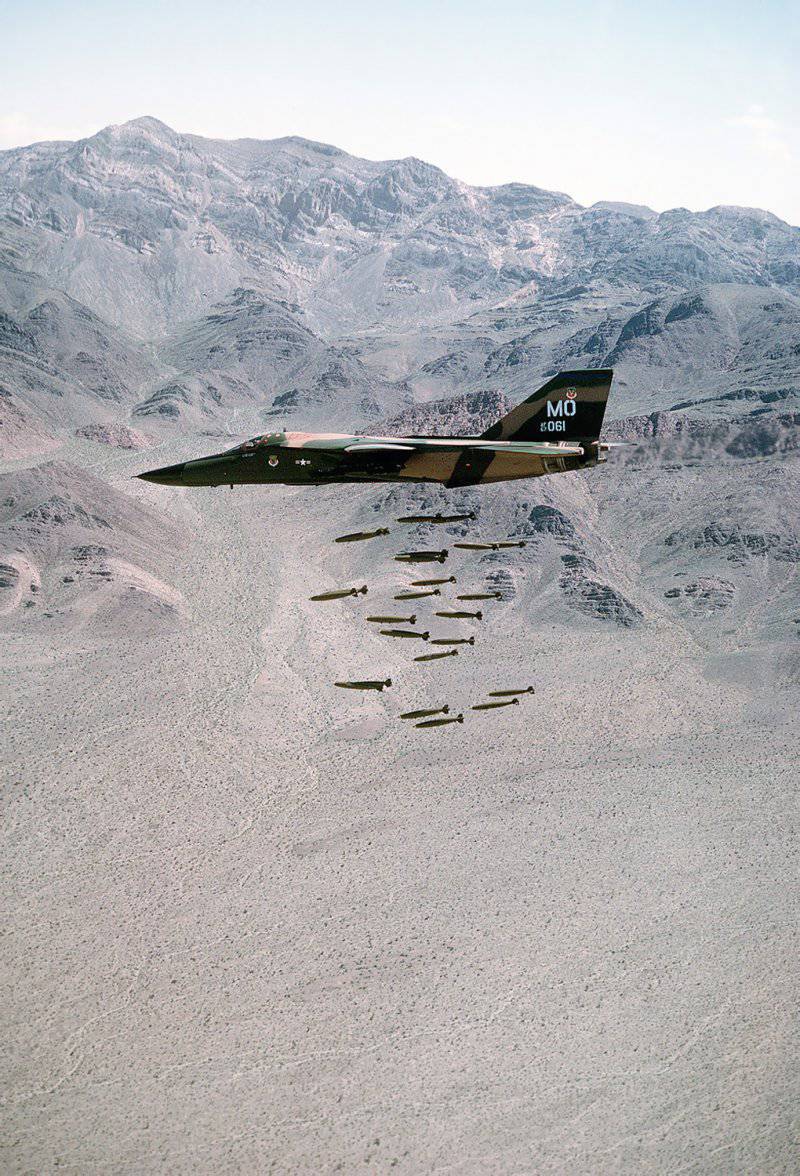 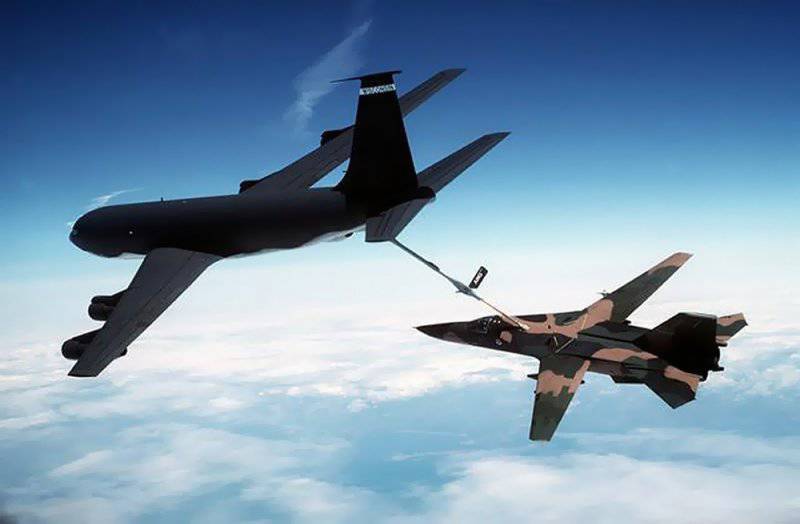 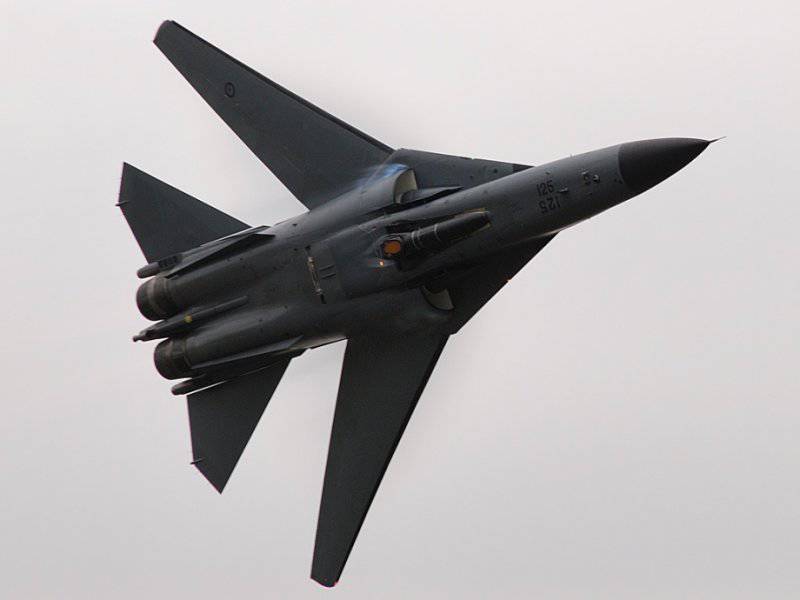 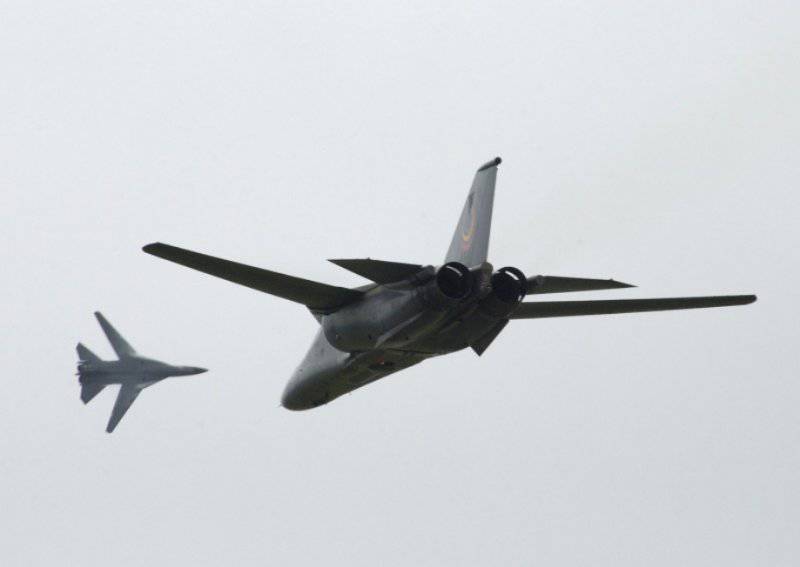 Ctrl Enter
Noticed a mistake Highlight text and press. Ctrl + Enter
We are
Vertical take-off aircraftAn-12 in Afghanistan
28 comments
Information
Dear reader, to leave comments on the publication, you must to register.