How Russian soldiers were fed in the royal army

March 18 2013
67
The strange thing is how far our contemporaries have distorted the idea of stories home country in pre-revolutionary time.


Take, for example, for clarity, an example of a “starving” tsarist army: it happened during the defense of Port Arthur. We learn about the “hunger” from the diary entries of military engineer Mikhail Lilier, dated by the beginning of September 1904. 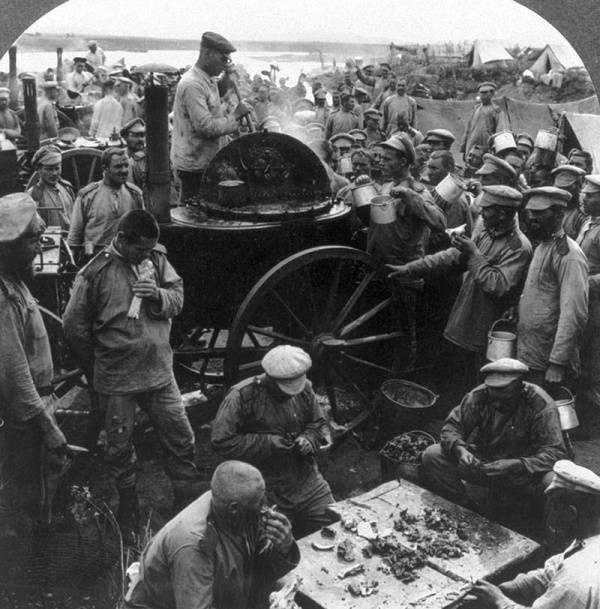 “... There is a strong lack of provisions. Soldiers have long been given horse meat, but many of them cannot tolerate it and are forced to be content with tea.

The officers, using the flight of quails, buy them from the Chinese, paying for a pair from 10 to 30 kopecks.

All the surroundings near Pigeon Bay are completely devastated. The unfortunate Chinese took absolutely everything that could be taken away, and their situation is now terrible. Bread is still mowed by the garrison for fodder, kitchen gardens are empty, cattle are taken by the requisition ... The amount of provisions in the fortress is decreasing every day. Even portions of horse meat are heavily trimmed. In order to give the soldiers a full portion, they would have, by calculation, to kill at least 250 horses every week. And with such a slaughter, we will soon remain completely without them ...

... Soldiers give a quick lunch only three times a week. Everyone then gets borsch with greens and 1 / 3 cans of canned meat. In the remaining four days a week they give a so-called “lean borscht” consisting of water, a small amount of dry vegetables and butter ...

... Instead of buckwheat porridge, which is not in the fortress, give rice, occasionally just filling it with butter and onions. So soldiers are fed only in more caring parts. But where the authorities care little about it, I saw such “rice soups” that in St. Petersburg hardly anyone would be able to get a remote idea of ​​them.

The officers in positions are also very poor with food and suffer all kinds of hardships. True, it is sometimes possible to buy quails from local Chinese around Lyaoteshany, but this is already a delicacy.

Yes, when compared with the hungry days of besieged Leningrad, it is just a feast.

In general, in the Soviet historiography it was decided to smear black paint everything related to royal times. They also criticized the army, describing the terrible order, dull drill and intolerable everyday life, the hungry everyday life of ordinary Russians Ivanov. But it is worth reading these memoirs here, and you start to think - was it really so awful?

Let's figure it out.

The food ration of soldiers by the tsarist army was regulated by order of the Minister of War No. 346 of March 22 of 1899. According to the text of this decree, the soldiers ration (as well as the non-commissioned officers ration) consisted of three parts:

Provisions issued food. Welding and tea money was issued to soldiers strictly for the purchase of the required standard set of products (which was calculated based on the prices of the location of the military unit).

Welding and tea money was issued monthly from the regiment to the hands of the company commander. The process of acquiring and distributing the products was handled by the company artel, who entrusted the food to the cooks, whose duties already included its preparation. A small interesting nuance: both artelschiki and cooks were elected from among competent employees by an open vote of the whole company, after which they were approved by the company commander. Somehow such procedures do not tally with the harassment and lack of rights of Russian soldiers of the tsarist army, according to the version of Soviet historiographers) ...

The basis for calculating the welding money was that a company must find an opportunity to purchase the following products:

Also, it was possible to buy various seasonings for welding money - pepper, bay leaf and so on.

And it was the standard set minimum: if a company managed to find good suppliers with low food prices, more food was purchased. It was strictly forbidden to buy products at inflated prices, and the company commander strictly monitored this.

During religious posts, fish and vegetable oil were bought instead of meat. At the same time, in the care of maintaining healthy forces of the personnel, the post was not allowed to be fully executed or not to observe it at all.

The food was cooked by cooks: the cooked meat is taken out with special ladles from the boiler, cut into equal portions and given to each soldier when eating separately from soup or porridge.

The lower ranks who ate out of the common pot (on business trips and others) received welders in the form of money.

It is hard to say. when canned food first appeared in the Russian army. On the basis of open data, in the 1891, the royal army used canned food from the People’s Food Society. And their list is small:

The lower ranks in the company were provided with two hot meals: lunch at 12 hours of the day and dinner at 19 hours. Breakfast and even morning tea was not allowed.

Interestingly, the so-called wine portions relied on the soldiers on certain days. They were issued servicemen:

A slightly different food supply system was issued for officers. They received the so-called "dining money", based on the following standards (per year):

In wartime or at the garrison service, that is, where it was difficult to purchase food from the local population, officers were allowed to buy food for themselves and members of their family in the regiment - for a full fee according to soldier standards.

Well, the complaints of engineer Mikhail Lillet, who was forced to “starve” during the siege of Port Arthur, are not surprising: compared with the food rations of peacetime, these were really harsh times of hunger ...