Polish freemen in the Russian "occupation"

March 18 2013
40
Amazing historical a feature of the Russian authorities at all times of the existence of the state (under different names and with different formulas of power) was the peculiarity of the manifestation of policies in relation to those peoples and states that, by the will of fate, happened to be part of Russia. In the vast majority of cases, the very peoples and territories that have been part of the Russian state over the past 200 years received much more advantages from their entry than the rest of Russia received these advantages from this entry (well, except for territorial growth). “Military Review” this time will not raise the topic of the Soviet “occupation” of the Baltic republics (several articles have recently been published about this recently). Today we turn to the topic of the peculiarity of Russian intervention in Polish affairs, which (intervention) happened immediately after the defeat of the Napoleon’s troops by the Russian army.


As is well known, during the Eastern march of Napoleon Bonaparte, the Poles actively supported the latter and took the most active part in the battles with the Russian troops. Polish historians explain this participation by the fact that Napoleon granted Poles freedom from Prussian and Russian domination, which manifested itself after a series of divisions of the Polish-Lithuanian Commonwealth in the 18 century. However, Polish historians are to a certain extent cunning. The fact is that Napoleon Bonaparte did not intend to give Poles any independence. He went the other way: he restored the state according to the formula of the duchy (the official name was the Duchy of Warsaw), which, subject to the Saxon king, was de jure subordinate to Bonaparte himself. It turned out sort of management through an intermediary vassal. Therefore, the words about the independence of the Polish state, allegedly obtained in 1807 by the works of the French army, are an ordinary fiction, designed to justify the participation of the Polish army on the side of the French, who rushed to Moscow in 1812.
By the way, it is worth mentioning that the “Polish independence” of 1807-1815 was so unique of its kind, that according to the new likeness of the constitution, proposed personally by Napoleon, in Poland, even the use of the words “Polish”, “Polish” and derivatives from them. Many Polish historians are deceptively silent about this. Why would ...

Moreover, the local currency was withdrawn from circulation by Napoleon, with the simultaneous introduction of one of the German currencies of the time, French business and judicial codes were imposed, which gave management rights to non-local representatives of the nobility and intellectuals. About 100, thousands of Polish young people were “barred” into Napoleonic soldiers to help the French troops in the war against the Russian Empire. 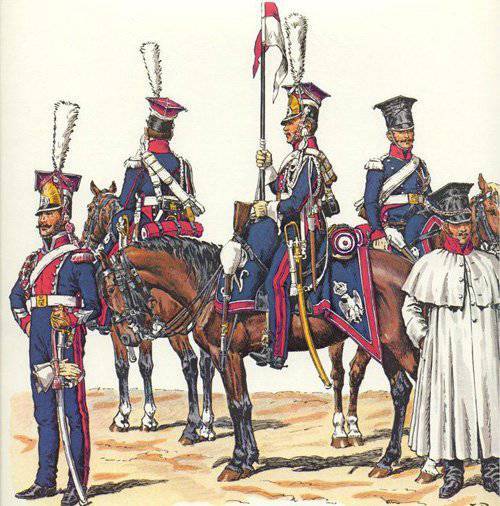 Polish Ulan regiment of Napoleon's army
Polish forces began to show special agility in terms of helping Napoleon after the French army was expelled from Russia, and the Russian soldiers moved straight to the West. Obviously, the Poles were afraid of revenge against Poland on the part of Emperor Alexander I after his victory over the French.

In the end, the Polish military formations didn’t help Napoleon, and the Russian soldiers in May 1814 celebrated the complete surrender of Paris, and with it the entire Napoleonic army.

War is war. It has its victorious winners, and there are its losers. The main triumph of 1814 of the year was the Russian emperor Alexander I, but among those who were to be in obvious failures - the Polish state, which, it is worth recalling at the time of 1814, neither de jure nor de facto existed. But in the most surprising way, Alexander not only does not begin to show any repressive measures against Polish commanders and local Polish nobility, but rather the opposite - he is taking an unprecedented move at that time. Alexander amnestied Polish soldiers and officers who took part in military operations against the Russian army and its allies and were defeated and captured by Russian troops. And the most unbelievable: he bestows on Poland, most of which, following the results of the great war and the Congress of Vienna, passed into the possession of the Russian Empire, an absolutely non-monarchist constitution, having read the main provisions of which, in Russia itself, supporters of liberal reforms swallowed saliva.

To begin with, Alexander I returned their self-name to the Poles, having eliminated from the map of Europe such a territorial unit as the Duchy of Warsaw while simultaneously renaming the country into the Kingdom of Poland. Precisely - Polish! Yes - he placed himself at the head of this state, but this Polish reign of Alexander I, as further developments showed, was rather a purely formal principle. The emperor (he was also the Polish king from 1815) appointed his viceroy in Warsaw, who, according to Alexander himself, was to be a representative of local political elites or a member of a large Imperial house. In fact, it turned out that it was the Poles who received the posts of the original Polish governors. The first governor was the Polish prince and General Joseph Zayonchek. The same Zayonchek, which Napoleon Bonaparte personally produced as a brigadier general, and who actively fought with the Russian army in the battle of Berezina, having lost a leg. In December, 1812 Zayonchek in Vilna was captured by the troops of Alexander I. 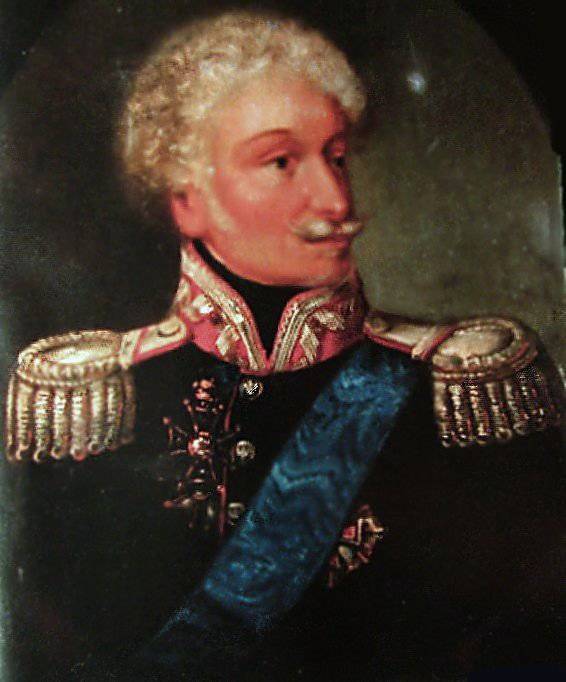 The next revolutionary principle for the Russian Empire was the separation of powers with a bicameral parliament with the upper house of the nobility and the lower house - the so-called Embassy Izba - a kind of embodiment of the representation of people's deputies. Alexander in the constitution prescribed the existence of courts free from other authorities for the Polish Kingdom, with particular emphasis on the election of judges. A variant of a large Senate court was even designated for those who broke the law, being a major government official.

If we add here also articles on the development of the Polish language, Polish educational institutions, freedom of speech, individual freedom, non-interference of St. Petersburg with the Roman Catholic faith, and even the point of preserving the Polish army, the final document can be called truly phenomenal. Why is "phenomenal"? - some readers will say, - unless anything of the kind existed in Europe. That's the highlight that in Europe, perhaps, existed, and in some places - several hundred years, but only in Russia itself the word "constitution" was, if not banned, then the power elites looked at it with obvious concern .

If you return to the Kingdom of Poland, it turns out that the territory actually occupied by the Russian Empire in 1815 year receives from the same Russian Empire rights and freedoms ten orders more than the rights and freedoms of the average Russian citizen. In the wake of changes in Poland, constitutional changes were expected in Russia itself. It was rumored that Alexander was imbued with European liberalism and could, by the 1818-1820 years, transfer Russia to the status of a constitutional monarchy. But, as you know, nothing like this happened in Russia (as a metropolis).

As a result, thanks to the actions of the “occupier” Alexander I, it turned out that the Kingdom of Poland from 1815 of the year became the only state of the Old World where the electoral system was developed to such an extent that the parliament was elected by absolutely all property classes on the basis of direct and direct elections. Even the peasants (albeit to a lesser extent) had the opportunity to participate in the elections to the legislators of the Sejm. The contemporaries of Alexander I called this phenomenal situation the most incredible gift that the Russian emperor could afford.

However, the so-called Polish middle class decided that Russia would still utterly infringe upon the rights of the Polish people and state (during the existence of the Duchy of Warsaw under the administration of Saxon monarchs, the middle class could not afford statements about infringement of rights ...) and therefore more and more voices were heard about the need for reactionary movements. At the same time, the “dissatisfied gentlemen” to the Polish majority, in fact, could not explain what exactly they were dissatisfied with: maybe the fact that Alexander I returned the Poles the actual right to govern their country, or that the Poles from peasant to nobleman had the opportunity to participate in the formation of the country's political system, or the fact that Poland had its own currency (Polish zloty) again ... The only argument: The Polish state is occupied by the Russian Empire, and therefore measures must be taken to release it. The Vatican rendered active support to those eager to take “liberation measures”, who decided to treat the Polish elite with statements that they, being under Russian power, lose their face, avoiding the religion of their ancestors. The Polish elite became thoughtful, but obviously did not want to lose its new status. I did not want to - well-wishers helped ... 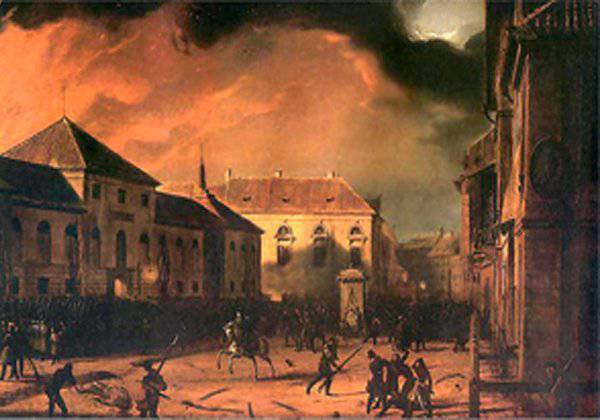 Taking Arsenal in the Kingdom of Poland

Help in the face of revolutionary ideologues from Europe came in the 1830 year (already under Nicholas I), and when relying on the very dissatisfied middle class in the Polish Kingdom, an uprising began. In the first days of the uprising, an arsenal was captured, and Russian officers and generals were killed by representatives of the revolutionary side. After two months of revolutionary pogroms, the Poles decided to “depose” the Russian Emperor in Poland, documenting the title of the Polish tsar and simultaneously declaring that the Polish people wanted to restore the borders of their ancient state, which once reached Kiev and Smolensk. However, it would be better for the Poles not to mention the word “Smolensk” ... Yes, and with deposition, they clearly got excited ... After all, with liberalism, Nicholas I was much worse than his older brother Alexander, and therefore, after his "deposition" Polish freemen completely and irrevocably. In August 1831, the Polish army was defeated, Warsaw taken by Russian troops, and the sovereignty of the Kingdom of Poland ordered to live long.

From the speech of Nicholas I to the Poles:
“Emperor Alexander I, who did more for you than the Russian Emperor followed, who showered you with good deeds and who patronized you more than his natural subjects, who made you the most flourishing and happiest nation, Emperor Alexander I paid black ingratitude.

I know that correspondence is being conducted with foreign lands, that reprehensible writings are being sent here, and that they are trying to corrupt minds ... Among all the troubles that trouble Europe, and among all the teachings that shake a public building, Russia alone remains powerful and inexorable.

You never wanted to be content with the most advantageous position and ended up destroying your happiness yourself ... ”

But history, in fact, often repeats its past turns. In different countries, on different continents and with different forms of power ...

Ctrl Enter
Noticed a mistake Highlight text and press. Ctrl + Enter
We are
"Flight of the Eagle." Like Napoleon with a handful of soldiers and without a single shot captured FranceCossacks in World War 1812 of the year. Part II. The invasion and exile of Napoleon
40 comments
Information
Dear reader, to leave comments on the publication, you must to register.