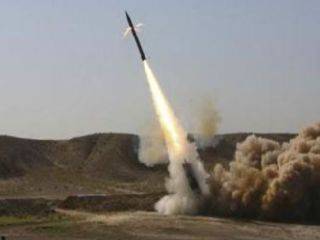 The North Korean military launched two short-range missiles toward the Sea of ​​Japan, where joint US and South Korean exercises are currently underway.


“Most likely, it was a test launch of short-range missiles. The launch decision was probably made at the military level, and not at the national level, ”the Yenhap agency quoted the source in the South Korean government. It remains unclear whether the launch was carried out on the orders of the DPRK leader Kim Jong-un, reports RT.
It was reported that these were KN-02 missiles, which are launched from installations similar to SCUD, and have the smallest strike radius among North Korean missiles - 120 – 140 km.
Such missiles can carry a small tactical nuclear charge.

According to the newspaper VIEW, 8 March unilaterally North Korea broke off the non-aggression agreement with South Korea, as well as the agreement on the direct telephone line between the two countries. In addition, the DPRK authorities have declared that they will launch a great war for the reunification of Korea, if the United States chooses a conflict.

And on March 13, the DPRK confirmed the decision to withdraw from the armistice agreement concluded with South Korea at the end of the 1950 – 1953 Korean War.

This happened against the backdrop of the United States and South Korea conducting joint military exercises, which caused sharp criticism from the DPRK.

Nuclear tests in the DPRK were carried out on February 12 in violation of two previous UN Security Council resolutions that banned Pyongyang from developing a missile and nuclear program.

The central newspaper of the Nodon Sinmun Labor Party of the DPRK published an article entitled “The Armistice Agreement no longer Exists,” according to which the US-South Korean maneuvers prove that the treaty “is no longer able to guarantee peace on the Korean Peninsula.”

North Korea also stated that it reserves the right to launch a preventive nuclear strike if necessary.

Ctrl Enter
Noticed oshЫbku Highlight text and press. Ctrl + Enter
We are
North Korea promises a “sea of ​​fire" in response to "provocations"Kim Jong Il Dies
100 comments
Information
Dear reader, to leave comments on the publication, you must to register.