The loss of Venezuela has become a loss for Syria 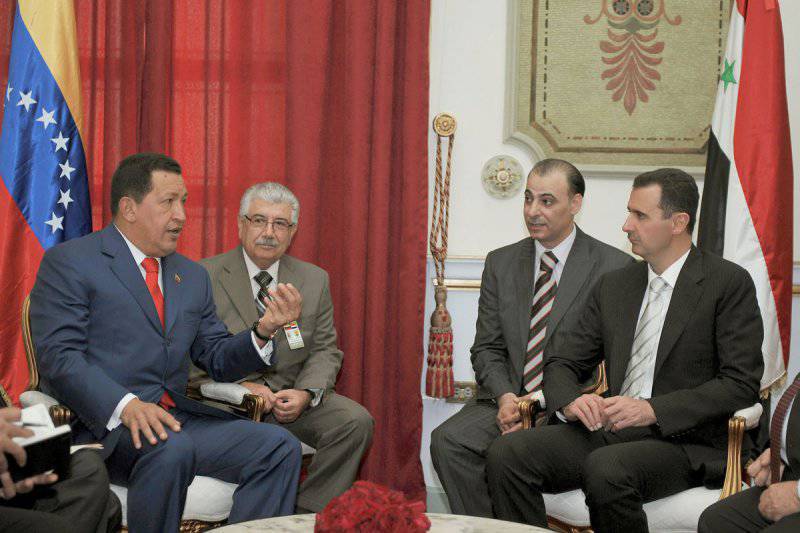 A small cozy mansion not far from the Mezze highway in Damascus ... This is the area of ​​foreign embassies. We, a small delegation of Russian women, will recognize the Venezuelan embassy through a lowered flag with a mourning ribbon. When we told the embassy staff that we were Russian, they did not check either the bags or passports, despite the terrorist threat in the city. It hurts to see a portrait of a smiling Hugo Chávez with a mourning ribbon ... We lay a bouquet of red flowers around him. We leave an entry in the book of memory. One of the embassy employees speaks Russian: “Thank you, Russia.”

The tragic, premature departure of the President of Venezuela was a huge loss, not only for Latin America. But also for the Middle East. Chavez was known for defending the rights of the Arab nation. He was one of the few who sharply and consistently condemned the US and NATO aggression against Libya. He came to the defense of Syria and its legitimate authority. Without any ambiguous phrases, without any duty calls for “ending violence from all sides,” as many politicians say, putting a different meaning in it.

Last July, he intervened on behalf of both Russia and China, when former US Secretary of State Hillary Clinton threatened them hysterically for speaking out against aggression against a sovereign state. Let me remind you that at that time Clinton said at a meeting of the so-called "Friends of Syria" in Paris that Russia and China would "pay dearly" for their position on Syria. Chavez specifically convened a press conference in Caracas, where he said: “We saw clear threats from the Secretary of State to Russia and China. Supposedly they will have to pay dearly if they do not do what is demanded of them. This is already an obvious, open madness on the part of those who consider themselves masters of the world. ” The Venezuelan president also said that Clinton should have addressed the problems of the American people: “The problems in the US itself are enough, but they want to do the same in Syria that they have done in Libya.”

In October 2012 of the year, speaking after winning the presidential election, Chavez said clearly and clearly: “How can we not support the government of Bashar Assad, if this is the legitimate government of Syria? If we do not support him, then whom do we support then? Terrorists who kill their people? ”He added:“ Syria is a sovereign state like the United States. We must support the sovereignty of other nations. ”

However, even before the tragic events in Syria, which began two years ago, there were very warm, friendly relations between Syria and Venezuela. Back in 2006, while visiting Damascus, Venezuelan President Hugo Chavez and Syrian President Bashar Al-Assad agreed to take a common anti-American position. Chavez then said that both countries share a strong and firm position against American imperialism and its desire to dominate the world. “We have a common political vision and together we will resist American aggression,” he stressed.

However, these relations were not limited to ordinary economic and political cooperation. Without exaggeration, they can be called true friendship. Syrians told such history. One day, Hugo Chavez, being in the Middle East, wanted to visit Syria. The problem was that Syrian President Bashar Al-Assad was on a foreign visit at that time, and he was not in the country. According to the rules of the protocol, the head of a foreign state cannot visit the country in the absence of its leader. Hugo Chavez contacted Bashar Al-Asad by telephone, and the Syrian leader told his Venezuelan colleague: “Come whenever you want. This is your country. ”

With the Venezuelan side were in friendship and other political forces of Syria. The representative of the United Communist Party of Syria said that his party held a meeting with one of the former ambassadors of Venezuela, Dieia Ayndari, who, in particular, told the following story. When Chavez was not yet the President of Venezuela, a rally of his supporters was to be held. But something prevented the event, and only one person came to it. And Chavez spoke to this man. One of his comrades told him that it was not worth spending so much energy on one listener, but the politician replied that it was important for him to convey his position to everyone. And continued to speak.

Shortly before the start of the attack against Syria — in 2010 — the projects of close cooperation between the three countries — Venezuela, Belarus, and Syria — were being developed and a meeting of the three presidents in Damascus was being prepared. In fact, it was about creating a new alliance, which, of course, was across the throat for the United States and its allies. Perhaps this, too, was one of the motives for speeding up the conspiracy against Syria.

In a difficult moment, Venezuela was a country with a helping hand. Without fearing accusations of violating sanctions against Syria, Chavez sent several tankers with fuel to a friendly country, which was extremely necessary. Not to mention that at all meetings of the UN organizations, Venezuelan representatives voted against the anti-Syrian decisions and raised their voices in defense of the UAR. In particular, at the end of January of this year, the Permanent Representative of Venezuela to the UN, Jorge Valero, on behalf of his country, categorically condemned the hypocritical policies of Western countries that declare their fight against terrorism, but at the same time support and finance the militants in Syria. He also said that Venezuela supports the political program for resolving the crisis, which was put forward by Syrian President Bashar al-Assad.

Such warm relations between the two countries provoked the vicious fury of the enemies and the media controlled by them. And they are happy to scratch with tongues. After late last year, Syrian Deputy Foreign Minister Faisal Al-Mekdad visited a number of Latin American countries with friendly visits, the evil tongues said that this way Bashar Al-Assad was seeking political asylum. Only the media, as they say, “got entangled in the testimony” and did not agree, in what country does the President supposedly seek refuge: in Venezuela, Ecuador, Nicaragua or Cuba? Most often it was called Venezuela. Although the head of the Syrian state clearly and clearly told the whole world that he did not intend to leave his country.

Especially in this case, the Qatari Al-Jazeera tried. This “TV channel”, trying to play in objectivity, took a telephone interview with the professor of the Venezuelan Institute of Diplomatic Studies Ramón Kabshi. When it came to this most mutated question concerning the granting of asylum in Venezuela to Bashar al-Assad, Kabshi categorically denied this and called these conjectures untenable. And Al-Jazeera immediately tore off the mask of objectivity: she unceremoniously interrupted the interview and cut off the communication with the professor. However, it can be recalled that in February 2011 of the year, since the beginning of the attack against Libya, the same media, led by Al-Jazeera, squealed, as if Gaddafi had fled to Venezuela. Do they have Ms. Vu?

... The heavy news of the loss of Hugo Chávez with pain was perceived in Damascus. President Bashar Al-Assad sent a letter of full sympathy and grief to Venezuela. He said that this loss is his personal loss and the loss of all the freedom-loving people of the world.

“He left the ranks of his people and was always with his people,” said the President of Syria, “It was a great leader who demonstrated legendary resilience in opposing the attempts of the United States and its allies to establish hegemony over all nations and states. He supported the freedom and development of all nations and became a symbol of the independence and dignity of Latin America. ” Bashar Al-Asad added that Chavez was a great and loyal friend who took the defense of Syria and spoke the truth about what is happening in Latin American society and the whole world.

Despite the difficult situation in which Syria itself is located, she sent a government delegation to Caracas led by State Minister Mansour Azzam to bid farewell to Hugo Chavez. Prime Minister Vail Al Khalki visited the Venezuelan embassy in Damascus and, together with other public and political figures, left an entry in the book of memory.

14 in March, the Permanent Representative of the SAR to the UN, Bashar Al-Jafari, spoke at the UN General Assembly meeting dedicated to the memory of Hugo Chavez. He stressed that the Venezuelan leader devoted his life not only to defending the sovereignty of his homeland, but supported the struggle of all nations against occupation, aggression and oppression. He advocated equality and social justice.

Jafari also said that Chavez’s death is a huge loss not only for the people of Venezuela itself, but also for Syria and its people, who will remember forever that Chávez supported Syria in its fight against terrorism and colonialism.

... Shortly before his tragic departure, the Venezuelan leader said: “I see in my brother, the Syrian president, a great and generous man. Take care and support him, and may, throughout the Arab world, new leaders emerge who can unite. I feel like a Syrian, Arabic blood flows in my veins. ”

And against Syria, and against Venezuela are the same foe. When Chavez was dying in Caracas, the Gosdep puppets came out for a demonstration and shouted "Go away!". The cynicism of this act is blatant, this is only one step to arm and go kill your brothers, as do the gosdepovskie puppets in Syria.

The Syrian people also understand the common interests of the SAR and Venezuela - it is not for nothing that the portraits of Hugo Chavez can be found next to the portraits of Bashar Al-Assad (I personally saw these portraits in the Syrian city of Tartus). All who fight for true freedom are brothers ...

And these days I remembered the poem “Chile in the Heart” by the Soviet poet Yevgeny Dolmatovsky. Another country, which had fallen under other circumstances, but which also wanted real freedom, was trampled by American puppets.

The poem has these words:
I choke with names
Like a gush of blood.
Our martyrs are too many
And the list is not closed yet ...
Still, these people
Shot in the darkness of nights
There were, there are
A hundred times more alive than their executioners!

Hugo Chavez was also shot, though not directly. Shot with malice and slander, shot with the meanness of enemies (it is possible that his illness is not accidental). And he ranked with the Chilean President-Hero Salvador Allende. And just as he is - a hundred times more alive than his executioners. And his moral victory gives hope here, in distant Syria.

Ctrl Enter
Noticed oshЫbku Highlight text and press. Ctrl + Enter
We are
"Rebel Aviation of Venezuela". In memory of the commandant Hugo Chávez is dedicatedHow the Orange Revolution stumbled over Venezuela
32 comments
Information
Dear reader, to leave comments on the publication, you must to register.