"Not everything was bad under Hitler": the stunning results of a public opinion poll on the 75th anniversary of the Anschluss of Austria 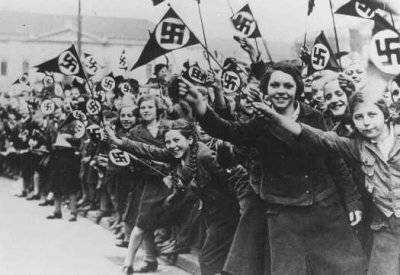 12 March 2013 marks the 75 anniversary of the Anschluss of Austria by Hitler's Germany. On this day in 1938, the German Wehrmacht entered the territory of Austria, and the next day Vienna welcomed in its streets the native Austrian Fuhrer of the German nation and Chancellor of the German Empire, Adolf Hitler.

Der Standard authors ask what would happen in Austria if there were no special law threatening to punish Austria’s attempts to join Germany. In this hypothetical case, would the German nationalists in this country be able to mobilize the population to repeat the Anschluss? And now 54% respondents from Linzer Market-Institut answered positively to this question. At the same time, as it turned out, it is young and more educated respondents in Austria who give the German nationalists a chance to Anschluss. 37% of respondents believe that the law prohibiting the Anschluss is a weak obstacle, and 50% consider it just a formal prohibition. But 13% believe that this is too strict a law.

In addition, the Linzer Market-Institut survey indicates that 61% of Austrian respondents would like to see a “strong man” at the head of Austria. It turns out that three out of five Austrians would like to see a strong leader at the head of their country. Similar sociological studies, but with a different formulation of the question, in the 2008 year showed that one fifth of the respondents in Austria would like to "have a strong leader, thanks to whom they will not have to worry about parliament and elections."

Linzer Market-Institut asked another "insidious" question to respondents: "in politics and in public debate, the question is raised that social benefits from the state should apply to their own people." 57% agreed with a similar nationalistic principle of state social policy. Supporters of the Austrian Freedom Party (FPÖ - previously associated with the name of its former leader Jörg Haider) dominate among carriers of such ideas of social justice.

Well, and, finally, the 42% Austrians in the sample answered the most “provocative” question positively. They believe that "under Hitler, not everything was bad." And vice versa, 57% accepted the thesis: "There was nothing good in the era of Hitler." At the same time, as it turned out, supporters of the "strong man" at the head of Austria tend to simultaneously see positive features in the Nazi era. When asked whether Austria in 1938 was "the first victim of Hitler's Germany" or whether it voluntarily joined the Reich, 53% of respondents believe that the Anschluss was voluntary. Less than half - 46% agree to see in Austria a victim of Nazi Germany. Indeed, many Austrians in 1938 wanted unification with Germany. This is a historical fact. For several decades after World War II, the official ideology in Austria supported the thesis that this country became the first victim of Hitler in Europe. The March 2013 survey of the year shows that this interpretation is not deeply rooted in modern Austria. It turned out to be impossible to erase from history and forget the cheering crowds in Vienna, who had greeted Hitler on 13 in March on 1938.

When asked about the possibility of mass excesses against the Jewish population in modern Europe, 12% of respondents consider such crimes to be absolutely impossible, 32% consider them quite probable, 39% quite possible and 17% very likely.

The world media found the results of a survey of Austrians about the anniversary of the Anschluss stunning.

Anschluss (him. Anschluss) - the accession, the inclusion of Austria into Germany, held 12-13 March 1938. After World War I, the reunification movement was very strong on both sides, both in Austria and Germany. Hitler himself - an Austrian by origin was a German nationalist and fiercely hated the Hapsburg Austrian particularism.

The texts of the 1919 peace treaties of the year: Versailles with Germany, Saint-Germain with Austria and the Geneva Protocols of October 1922 contained articles prohibiting the Anschluss.

The Anschluss of Austria, Germany, took place on the night of 11 on 12 in March of 1938, when German forces, previously concentrated on the border in accordance with the Otto plan, entered without any resistance on the territory of Austria. 13 March 1938 of the year 19 watches Hitler triumphantly drove into Vienna. On the same day, the law “On the reunification of Austria with the German Empire” was published, according to which Austria was declared “one of the lands of the German Empire” and was henceforth called “Ostmark”. The historical name "Austria" (Österreich) was thus abolished. 10 on April 1938 of the year in Germany and Austria was held a plebiscite with the following wording of the question: "Do you agree with the reunification of Austria with Germany on 13 in March of 1938 and vote for the list of our leader Adolf Hitler?". Above the large circle is the inscription "Yes", above the small one - "No". According to official data, 99,08% of the population voted for the Anschluss in Germany, 99,75% in Austria.

In the course of the Second World War, the allies of the anti-Hitler coalition took the course to annul the Anschluss. In the Moscow Declaration 1943, the Anschluss was declared invalid. True, the allies with Austria did not remove guilt for the Nazi crimes.

After the end of the war, Austria was separated from Germany, all the territories that had previously been part of it were returned to it, however, it also carried out an occupation regime. The occupation of Austria continued until the 1955 year, when the country was restored as an independent and sovereign state in accordance with the State Treaty on the Restoration of an Independent and Democratic Austria, signed by 15 in May 1955. The 1955 Agreement of the Year with Austria was concluded by the USSR, the USA, Great Britain and France.

The state contract 1955 of the year forbade the Anschluss, i.e. the unification of Germany and Austria. The 4 Article "Prohibition of the Anschluss" states: "The Allied and United Powers declare that a political or economic union between Austria and Germany is prohibited. Austria fully recognizes its responsibility in this matter and will not enter into a political or economic union with Germany was fit. "

The government of Konrad Adenauer in Germany criticized both the neutrality of Austria and the nationalization of the so-called "German property". For decades, the Austrian government, in spite of the Germans, has been pursuing a conscious policy in Austria to strengthen Austrian identity. However, it took some time for the Austrian national consciousness to prevail among the majority of the country's population.

Nevertheless, despite the ban, Austria and the Federal Republic of Germany eventually established a de facto special relationship. In 1976, the Austrian shilling was tied to the West German brand. There was close cooperation between the Federal Republic of Germany and Austria in the security policy of the special services. In the unofficial German Commonwealth, Austrians specialized in the Balkans - Yugoslavia and transmitted the collected secret information of the West German BND.

Austria initially supported the policy of Germany in relation to the GDR, refusing the latter in state recognition. However, after signing by the will of Willy Brandt of the German-German General Agreement of December 21 1972, Austria went to the diplomatic recognition of the GDR, which became the third German state. Consular relations between Austria and the GDR were established in 1975. Austria recognized the institution of GDR citizenship, to great disappointment in the Federal Republic of Germany. Austrian Chancellor Bruno Kraisky has been sharply criticized for this. Despite this, Krajski made an official state visit to the GDR in the spring of 1978.

However, Austria also played a prominent role in the fall of the GDR, when in 1989 it provided a corridor for the escape of GDR citizens through Hungary to West Germany. Austria welcomed the reunification of Germany, which was officially completed on October 3 1990.

The fall of the USSR led to a change in the neutral status of Austria. In 1995, Austria joined the European Union. The ban of the 1955 Treaty of the Year on the political or economic unification of Austria and Germany by the formula "in whatever form" at that moment was tried to be forgotten, both in Moscow and in Berlin and Vienna.

In the bilateral political relations of Austria and Germany within the EU, the most notable episode was the active role of the government of German Chancellor Gerhard Schroeder and Vice Chancellor Joschka Fischer in organizing pressure on Austria in 2000, when FPÖ Jörg Heider was in the government coalition. Until the end of the red-green coalition in Germany, relations between the two German states politically remained tense.

European integration in the case of Austria and Germany means the integration of the two German states. As of 2010 year, 180 thousand Austrian citizens live and work in Germany, and 213 thousand German citizens live in Austria. For Austria, Germany is the largest trading partner. About 40% of Austria's imports go to Germany, and a third of its exports go to this country. More than 43% of all foreign direct investment in Austria belongs to Germany. In turn, Germany is the number one object for Austrian foreign direct investment. German firms are involved in a number of large companies in Austria, such as banks, media companies and supermarket chains. Of particular importance to the Austrian economy is the high proportion of German tourists in Austria. Almost half of the nights in the Austrian tourism enterprises accounted for the German guests. Special relations between Austria and Germany were established in the cultural and scientific fields. Many cultural figures and scientists from Austria work on a permanent or temporary basis in Germany, and vice versa.

Many Austrian authors are published in German publications, and Austrian journalists find their use in the German media market, and vice versa. Last but not least it is a question of a close integration of the German publishers in the Austrian media market. Austrian cable television networks are open to many German TV channels. This means that public discussion of political and social issues often takes place in parallel in both German states. Meanwhile, Austrian filmmaking and television, as well as Austrian cultural exports in general, are playing an increasingly prominent role in Germany.

Ctrl Enter
Noticed a mistake Highlight text and press. Ctrl + Enter
We are
The keys to the world are in the hands of RussiaUkrainian nationalists
48 comments
Information
Dear reader, to leave comments on the publication, you must to register.