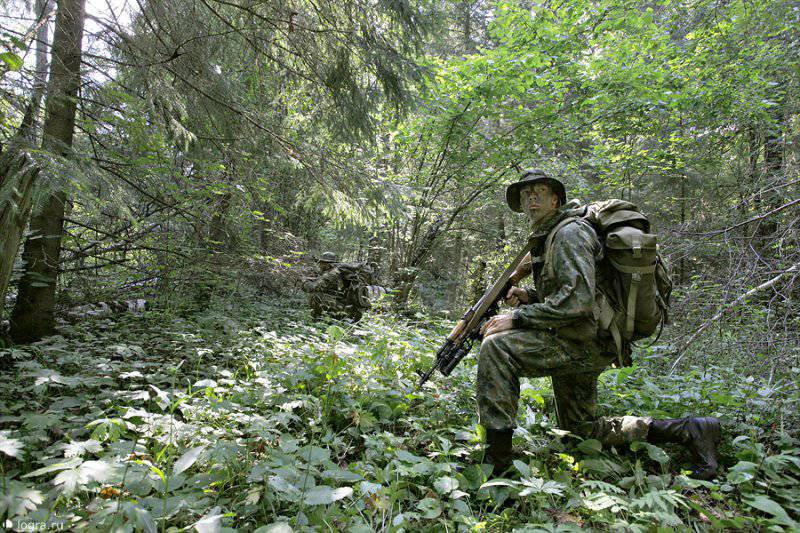 Many do not even know what this military unit really is. In essence, these are the eyes and ears of the Airborne Forces, reconnaissance and sabotage units that operate in the enemy's rear, preparing the arrival and preparation of the landing in case of need, are engaged in capturing airfields, small bridgeheads and platforms. Their functions also include the solution of many related tasks, including the seizure or destruction of communications, other infrastructure and much more.

This is the special forces of the Airborne Forces, which acts, speaking in an artistic and more understandable language, like a ray of light, as swiftly and easily, making its way through any, even the slightest gap.

The most successful use of airborne special forces is considered to be in conditions when the army of our country conducts active offensive actions.

Special Forces Airborne performs its tasks without fear and without reproach, anywhere in the world. Special-purpose tactical training of special forces is the development of absolute stress tolerance among fighters who are not normalized, bordering on pathology, endurance, narrow-profile training in very many disciplines, including technical, and running, running, and running many more times, performing in training direct marches 30 kilometers or more.

So what is the activity of this almost mythical division, whose name evokes delight, secret fear and wariness in the soul?

The special forces of the Airborne Forces can be used everywhere: behind enemy lines to create discord and chaos, to accomplish tasks to assist in the capture and retention of strategic objects until the main parts of the army come up, in capturing important bridges, airfields, transport hubs, etc. And since the capture and sufficiently long retention of such important objects is an impossible task for the few special forces groups of paratroopers, their main purpose is to create an enabling environment for the further actions of numerous airborne assault detachments.

For operations, separate spetsnaz groups are thrown into areas predetermined in enemy rear areas, with a clear indication for each of them a deployment zone, having fallen into which, reconnaissance paratroopers attack the places where enemy forces are concentrated. The meaning of such attacks is obvious: conducting unexpected raids for the enemy, the entrance of which causes maximum damage and damage, the special forces landed troops as a result of their attacking operations eventually cause the enemy to panic.

This happens until the recollected enemy begins to recover. Then the special forces of the Airborne Forces, in order to prevent on their part unnecessary sacrifices, turns in the opposite direction to hide or continue their work elsewhere.

We have seen a lot of what we have said in feature films and documentaries, we read in books. But this is all shown and written truth, even if sometimes embellished, but this is the work of the airborne special forces.

Just like in the movies, special forces fighters get together in tight groups, begin to retreat, hiding and changing direction. And when they fail to quickly break away, they set mines and streamers right behind them to slow down the pursuit of the enemy and be able to "dissolve" on the ground.

Due to the fact that the tactics of these special divisions of the Airborne Forces are based on high maneuverability and swiftness combined with universal firepower, the landed groups are created by their leadership from the expectation that they have the optimum size and well-tuned weapon.

In these groups there are no additional or spare people, it is customary in them to ensure the life and safety of each warrior.

Немного stories. From the very first moment of the introduction of our troops into Afghanistan, the special forces of the Airborne Forces constantly participated in various operations, therefore, when the 1994 regiment of the Special Forces of the Airborne Forces formed the 45 in the summer, there was already enough experience for the soldiers to be as versatile as possible and truly prepared for the war. In addition, numerous foreign developments and technologies have already been introduced that have positively influenced the quality of the created special forces of the Russian airborne forces.

The 45 th regiment is perhaps one of the legendary for the modern history of the Russian Armed Forces. In Chechnya, they know him well enough. It is said that even unverified information about the approach of the special forces of the Airborne Forces forced the dushmans to withdraw from positions and leave. The leaders of the militants during the first Chechen war promised fabulous sums for capturing at least one soldier of the 45 regiment. Honor and praise to our fighters: the promises remained in words, since not one of them came to the militants, neither alive nor dead. But this regiment is considered the youngest part of the army of our country, but which one!

The 45 regiment is a unique combat unit of Russia, which has everything to solve its tasks: the necessary weapons, equipment, and equipment. In addition, it is armed with unmanned aerial vehicles.

The regiment also includes a psychological detachment whose task is to demoralize or disorientate the enemy troops, to destroy his belief in the meaning of the resistance. This squad has the skills and abilities to induce a neutral civilian population to their side, which is especially important in the information age, sometimes this is done with the help of an existing compact television station broadcasting the necessary programs within a radius of many kilometers.

And that's not all. The possibilities of the special forces airborne troops of our country are truly enormous.

These units fought during the Transnistrian conflict, participated in operations during the Georgian-Abkhaz conflict, ensuring mainly the safety of refugees and the remaining civilians.

But these are just facts, and in life, not everyone can achieve the status of a universal soldier from special forces of the Airborne Forces. It is foolish to think that this is an easy task. In order to become a real special forces, the applicant first passes numerous tests on psychology, then on physical training, and only then, having determined his abilities and readiness, the commission sends him to a specific military specialty as part of the special forces.

Constant training, which replace the march throws, night shooting, front mountaineering, and then tactical exercises, training of sappers, again, marches, night shooting .... And so all the time in a circle.

It is clear that not all future fighters of a formidable special forces will withstand a similar pace and load, which is why after about six months the screenings begin: someone does not stand up to their health, someone doesn’t stand up, someone is deducted from the commanders , and in the end there are those, the real ones, who perfectly possess both weapons and skills. They are the real special forces soldiers who have neither face nor estate for us. They do not cease to be at the right time in the right places, be it hostage taking, military operations in and out of hot spots, in the center of conflicts in Bosnia and Dagestan , Chechnya, Kosovo and many other places.

In all the years that the Airborne Forces Special Forces exist, its fighters do not cease to fight, looking for warehouses with enemy weapons, drug depots, saving many lives of civilians, preventing many evils. That is why these units are considered to be the real elite of the Russian army, and the 45 regiment - the regiment of the future.