Iran fixes MiG-29 on its own 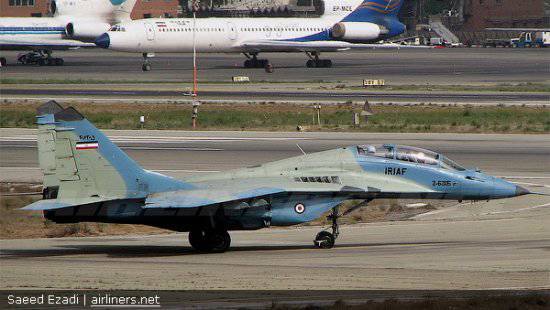 According to the magazine, General Shah-Safi also noted that the Iranian air force can fully protect the national airspace and that the country has made significant efforts to produce spare parts necessary for the modernization of its aircraft. The commander of the 2 tactical airbase in Tabriz, where the MiG-29 is undergoing repairs, said that the Air Force technicians had spent 14000 man-hours to bring the aircraft into flight condition.

Since 1991, the Iranian Air Force has received 18 MiG-29A fighters and seven MiG-29UB "sparks". They were ordered under a contract with the USSR in June 1990. Iranian MiG-29s were the first and only interceptors acquired by Iran after the Iran-Iraq war, and were intended to replace the F-14A Tomcat, which were lost during the war or were decommissioned due to lack of spare parts. MiGs were ordered as part of an Iranian fighter recovery plan aviationproposed by Air Force commander Mansour Sattari. It was originally planned to purchase 48 MiG-29s to protect the main Iranian cities: Shiraz, Tehran and Tabriz, but the order was reduced due to financial constraints.

MiGs manned 11 and 1 tactical squadrons based at Tehran Mehrabad airport, as well as 23 and 2 tactical squadrons in Tabriz. Under the terms of the contract, 400 Russian advisers, technicians and instructors for seven years were to assist in the operation of fighter jets. Russia was also required to provide them with spare parts throughout the entire life cycle - 25 years or 25000 [as in the original text - A.F.] flight hours.

However, the MiG-29 supplied were from the presence of the Russian Air Force, and more than half of them had to exhaust the resource by approximately 2007 — 2009. By this time, at least two Iranian MiG-29А and four MiG-XNUMHUB were transferred for storage due to the exhaustion of the resource. As reported, the aircraft manufacturer was unable to provide guidance on maintenance and repair, making it impossible for Iranian specialists to carry out repairs themselves. Nevertheless, the leadership of the Iranian Air Force made efforts to acquire the necessary documentation from other countries, and presumably by the middle of the 29s. Iran could independently conduct periodic inspections of aircraft with the help of its engineers without the participation of Russian specialists.

Iran also managed to get some equipment for these planes from other countries - after Russia allegedly refused to supply it. For example, two Iranian MiG-29s were equipped with filling rods, and outboard tanks with a volume of 1520 liters were received from Belarus.

As mentioned above, due to the development of a resource, aircraft began to be decommissioned. The first MiG-29UB from the 23 squadron was transferred to the storage base in 2006, followed by the second Spark and the combat MiG-2007А in 29. In the summer of 2008, the MiG-29UB from 11 squadron in Mehrabad was also deposited in anticipation of repair, the second MiG-29UB of the same squadron was decommissioned in spring 2009.

As a result, the leadership of the Iranian Air Force decided that it was necessary to initiate its own program for repairing this type of aircraft and appealed to the aircraft repair enterprises in Tabriz and Tehran that service the MiG-29, as well as Iran Aircraft Industries (IACI) with a proposal to repair aircraft in storage in Mehrabad. 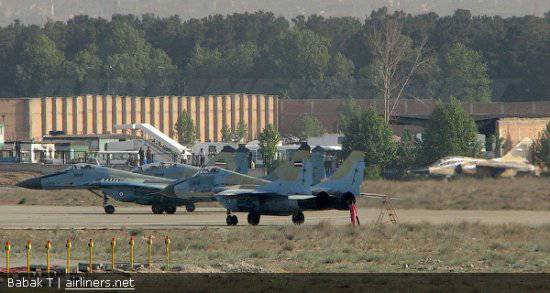 During a visit to Tehran by V.Putin in October 2007, an agreement was concluded worth $ 150 million for the supply to Iran of 50 turbojet engines RD-33 manufactured by MMP. V. Chernysheva. Iran has stated that these engines will be used in the Azarakh national development fighter project. It seems that in fact these engines were never planned to be used on the Iranian fighter, which is an example of reverse engineering of the American Northrop F-5E Tiger II. It became obvious that this was nothing more than a cover for their real purpose, which consisted in replacing the exhausted engines of the Iranian MiG-29. Shipments started in 2008.

As part of the repair program, the aircraft repair plant in Mehrabad in 2007 took responsibility for the repair of the first MiG-XNUMHUB fighters of the 29 squadron stored in Tabriz. They were followed by work on two former Iraqi MiG-23s, which spent almost 29 in storage after their flight to Iran during the Gulf war in 18. For this reason, they were in very poor condition when they were transported to Mehrabad for return in flying condition. In the end, the first independent repair of the Iranian MiG-1991А was completed, and in September 29 the fighter made a successful 2008-minute test flight.

In the spring of 2010 in Mehrabad, additional MiG-29А were repaired, at the same time, the first MiG-29UB repaired in Tabriz also returned to service. Repair of the second MiG-29 in Tabriz was completed in June 2010. This aircraft was damaged in 2001, but its repair was postponed for eight years due to the lack of necessary details.

Currently, IACI continues the repair program of Iranian MiG-29 at ARZ in Tabriz and Tehran.

There are unconfirmed reports that the Russian side may again be ready to assist the repair work carried out by IACI in Mehrabad. Despite the shortage of spare parts, starting with 2008, the Iranian Air Force managed to return five stored MiG-29, which were in storage, and in the next five years it is planned to increase this number only by the efforts of the Air Force and IACI personnel.