Why the USA can achieve greater success in Afghanistan than the USSR ("World Politics Review", USA) 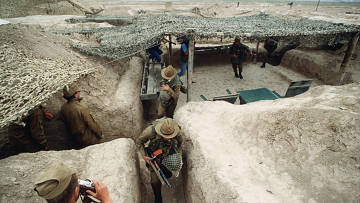 If we take the 7 October 2001 of the year, when American troops first invaded the country, as a point of reference for the American war in Afghanistan, today it lasts longer than the failed Soviet operation in the 1980. At the NATO summit, which was held on November 20 in Lisbon, the US government decided to continue the fighting in Afghanistan, at least until the 2014 year. One of the high-ranking representatives of the American authorities even called this “expected date of the withdrawal of troops” “only desirable.”

Opponents of the continuation of the large-scale American operation in Afghanistan, aimed at suppressing unrest within the country, refer to the failed attempt of the Soviet armed forces to suppress the Afghan insurgency in the 1980s as a sure sign that the United States will face similar difficulties today. Of course, these two operations have sad similarities. For example, the Soviet Union tried to transform Afghanistan into a socialist state and viewed the war through the prism of its Marxist-Leninist ideology. Therefore, he never understood what the Mujahid opposition could be attractive for, which supported what the USSR considered reactionary politics. Similarly, some representatives of the American authorities initially hoped to rebuild Afghanistan according to Western liberal-democratic principles, which could well not meet local conditions.

Some opponents of the current American military operation are in favor of a full and early withdrawal of American troops, but most still support the idea of ​​a smaller American military presence in order to conduct counter-terrorist operations. In this case, it would be mainly about attacks by American unmanned aircraft aimed at persons suspected of terrorist activities in Afghanistan and Pakistan, as well as on limited special forces operations in these countries. At the same time, American troops would have to avoid clashes with the forces of the Taliban, whose goals do not go beyond the overthrow of the Afghan government.

A few weeks ago, two influential analytical organizations - the Council on Foreign Relations (CFR) and the Center for American Progress (CAP) - published reports on the situation in Afghanistan, which support the approach of reducing the scale of the Afghan war, and approves , that the money spent on the war, exceeded the value of goals.

The report of an independent expert group sponsored by the CFR called on the Obama administration to use the review of the Afghan strategy, which was released in November to soberly assess how successfully the anti-insurgency approach proved to be in Afghanistan. As stated in the report, if the review states that this approach was not successful, then “a more significant reduction in the scale of the military mission is guaranteed.” The CFR report recommends trying to shift the burden of war onto the shoulders of other coalition partners, as well as striving for political reforms, national harmony and the development of regional diplomacy. The report’s authors argue that instead of allowing the current Afghan government to negotiate peace with the Taliban insurgents, as is being done today, Washington should begin to play a prominent role in stimulating large-scale reform, as well as in the process of national reconciliation Mediated by the United States. They also advocate that the US continue to expand and improve the Afghan army and police, as well as assist in the development of the Afghan economy, especially the resource-producing and agricultural sectors, in order to rid the country of the need for international assistance.

As in the CFR report, the CAP authors argue that the top echelons of American politics are paying excessive attention to Afghanistan and allocating an excessive amount of resources for it, given that, according to the authors, the US interest in winning this war is very limited. They call for a reduction in the size of the US military presence and an increase in efforts to create a favorable political and diplomatic structure that is necessary for long-term stability in Afghanistan. Conditions for such stability include “a comprehensive settlement of the conflict in the country, the development of the Afghan state to reduce its dependence on external support, and assistance in reaching an international diplomatic agreement between neighbors and regional partners of Afghanistan.” In the event that the Afghan government does not move towards settling the conflict with its opponents and carry out the necessary political reforms, the authors recommend that the United States speed up the withdrawal of its troops from the country and immediately cut back on all other support.

As in the CFR report, the CAP authors also conclude that “in the conditions of a smaller military presence by the United States and NATO-ISAF, along with the provision of more extensive political and diplomatic assistance, the chances of achieving the desired state of stability are much greater than when conducting full-scale anti-insurgency operations aimed at the destruction of the Taliban rebels and the expansion of the influence of the Kabul government throughout the country. " They believe that the likelihood of a protracted civil war in Afghanistan is very high, despite all attempts by the United States to achieve a resolution of the conflict. They believe that after a few years, US troops should begin to limit their actions in Afghanistan to counterterrorism operations, intelligence gathering and training for the Afghan security forces.

These reports provide a valuable contribution to the international debate on how the United States and its allies can best realize their interests in Afghanistan. We have to ask whether the current administration’s Afghan strategy works well and, if it’s not, how to improve it or how to abandon it, in order to have an alternative strategy in case the current large-scale anti-trust approach collapses or is too costly. If the presence of too large a contingent of American and other foreign troops in Afghanistan does not bring the desired effect, it should be reduced. While international terrorists do not have access to arms mass destruction in Pakistan or other countries, the damage they can cause is very limited.

We can recall the Soviet experience: while neither the Soviet troops, nor the troops of the puppet Afghan communist government ever managed to gain control over the rural areas, the Soviet Union and the government led by its protege President Najibullah never let go of the control over the Afghan capital, the main cities and provincial capitals. And only after the collapse of the Soviet Union at the end of 1991, when Najibullah lost the support of Moscow, the Islamist rebels, finally managed to gain the upper hand and capture Kabul. By analogy, it can be assumed that even if the scale of American support falls, the Kabul government will most likely be able to prevent the violent seizure of the Afghan state by Islamist rebels and maintain control over all the main populated areas of Afghanistan.

However, despite the fact that reports draw a distinction between counterinsurgency and counterterrorism strategies, the best way to prevent the Afghan-Pakistani region from becoming a breeding ground for terrorism is to destroy the local allies of the rebels. The boundaries between the Taliban and al-Qaeda can be very blurred, if we take into account their deep connection at the personal and ideological levels. Even if the Taliban leaders began to deny that however large a number of al Qaeda members could return to Afghanistan, it would not have been possible for the Taliban to use force against their former allies.

Thus, the implementation of the recommendations given in the reports would now be premature. Only recently, the increase in the size of the US and NATO military contingent was stopped. War in iraq and other cases from stories demonstrate that rebellions can lead to unpredictable results. Renewal of US and NATO training programs, along with increased efforts to stimulate desertion from the Taliban, may be enough to give the Kabul government and its local allies the opportunity to balance the rebels and stimulate the Taliban’s further transition under the Kabul flags, which will force the Taliban leaders to compromise .

Fortunately, for Washington, there are a number of significant differences between the situation that the Soviet Union encountered in Afghanistan in the 1980s, the one in which the United States finds itself today. This makes it possible to assume that the Americans and their NATO allies have a chance to achieve better results than the USSR did. Surveys show that in relation to international troops, Afghans are more favorably disposed than they used to be to the Soviet Union. In addition, the number of Afghan rebels who are actively fighting with foreign troops is much lower than in the Soviet period.

Most importantly, the international coalition that opposes the Islamist rebels today is much more extensive than in the 1980s. In addition, large-scale military, diplomatic and other assistance was provided to the rebels fighting the Soviet occupiers, the United States, their allies from NATO, China and other countries. Today, all of these states support the Afghan government.

Finally, the United States benefited from the approach taken by the former Soviet republics. In formulating their Afghan policy, they were guided rather by a cold calculation of their national interests than by a thirst for revenge. Even the Russian government persuades the United States and its allies to continue to fight Islamist rebels, and increased its NATO assistance in this area, among other things by giving NATO member countries permission to transit through its territory.

These predisposing factors — the unclear consequences of the recent increase in military contingent, the unpredictable nature of the uprisings, wide international support for coalition operations, and finally, the wishes of the Afghans themselves to get rid of the Taliban repression — should push the Obama administration to continue to implement its well-developed, though difficult to implement, Afghan strategy for at least one more year, while at the same time developing, just in case, several convenient alternative plans.