Economy of Russia. It's time to move from words to action 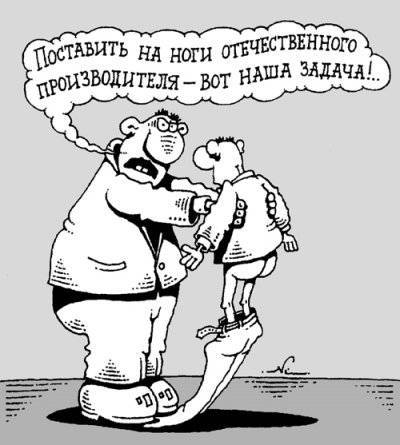 According to official forecasts of the Ministry of Economic Development of Russia, the country's economy this year should grow by 3,6%. It should be noted that these forecasts were given at the end of last year. After the first two months of the year 2013, plans have to be semi-officially adjusted. In particular, according to the Deputy Minister of Economic Development Andrei Klepach, the country's economic growth is unlikely to exceed the bar in 3,3%. Economists, who today, let's say, are somewhat far from the current government, make even more modest forecasts. In particular, Alexei Kudrin, who himself had not long ago ruled the Russian financial sector, expresses confidence that 3% growth for the country's GDP following the results of 2013 can be considered a good result in the current economic conditions. Another opposition economist, Mikhail Delyagin, says that the current Russian economic system has exhausted itself so much that today even a hypothetically possible increase in energy prices does not give Russia any significant economic growth indicators.


On the one hand, the words of both Kudrin and Delyagin are close to the truth. It is hardly worth waiting for the once-announced seven percent annual economic breakthroughs. But only in this connection another question arises: didn’t Kudrin or Delyagin participate in the creation of the economic model by which modern Russia lives today?

For example, the same Mikhail Delyagin, with all due respect to him personally, at one time held very important posts and was one of those people who formed the Russian economic model. In 90, Mr. Delyagin was an economic adviser to President Yeltsin, adviser to Boris Nemtsov when he was the vice-premier of the Russian government, served as economic adviser to the government of Primakov and was a personal assistant to the head of the Cabinet of Ministers, Mikhail Kasyanov. With such a track record, which manifests itself in relation to Mikhail Delyagin, it turns out that either none of the above-mentioned authorities listened to his advice and did not need his help, or Mikhail G. himself was somewhat cunning, trying, as they say, to get out in the current conditions out of the water ...

And if Mikhail Delyagin on the economic scale of the country did not rise above the adviser and assistant on the power vertical, then Mr. Kudrin, who criticized the measures taken by the economists in power, for several years headed the Ministry of Finance. And to hear today that the current economic model of Russia is flawed, from the mouth of a person who has been building this system for many years - at least, somehow strange.
To argue with the fact that the economic model of modern Russia is not a fountain is pointless. But when words about a “bad economy” are heard from the lips of those people who, by virtue of their official duties, were themselves actually at the origins of the formation of this financial model, certain doubts creep in ... Maybe these people really recognized and rethought their previous mistakes, or not recognizing for themselves any mistakes and miscalculations, they again want to be on certain power levels. At the same time, the number of critical arrows addressed to today's Russian economic model by the mentioned citizens increases in proportion to their distance, so to speak, from the big cake.

However, there is a clear tendency according to which, in terms of criticism of the existing economic model, Aleksey Kudrin is trying to step on the throat of his own song. The reason for this, obviously, lies in his desire to be at the head of the Central Bank, which cannot be ruled out after the swift departure of Mr. Ignatiev, the current head of the Bank of Russia, from his post.

Mikhail Delyagin doesn’t come to the throat of his own song, because he understands: his chances of “catching” a significant state post are close to zero today. That is why Mikhail G. is free in his statements as a bird in flight and is free to say what he thinks about the state of the current Russian economy. As they say, there is nowhere to retreat — behind is advisory activity under Mr. Kasyanov ...

Nevertheless, one can listen to Delyagin’s words, at least for the reason that he graduated from the economics department of Moscow State University with honors, and later received his first candidate’s and then his doctoral degree in economics. It is these facts that give reason (discarding all the opposition pathos of Delyagin) to listen to his words about the state of affairs in the Russian economy today. And these words relate to the fact that in Russia from the beginning of the current year (at least the current one) negative processes have emerged, which in previous periods of economic development became the harbingers of financial turmoil. What are these processes?
One of them is that in Russia, for the first time since the 2008 crisis of the year, there has been a tendency to reduce freight traffic by rail. There are several reasons for this: the passing of the peak of Olympic construction projects in Sochi, the revision of transport logistics by large companies, the lack of clear plans for the development of the Russian railway network, and plans for the implementation of bilateral projects within the railway sector. For example, once again the project for the development of the Trans-Korean railway, which could connect the ports of South Korea with the ports of Western Europe through such transit countries as the DPRK and Russia, ordered to live a long time. He ordered, despite all the recent assurances of Pyongyang that the issue of developing the railway system with the help of Russian specialists will be resolved soon. It turns out that they are either deciding so far, or have already decided not in the way that Russia had planned ... Proceeding from this fact alone, Russia lost (or, so to say, received less) billions of dollars in potential investments, after all, the word about the huge transit railway power that links Asia -Pacific and North Atlantic, while remain words.

Here it is worth recalling that the process of reducing the level of cargo transportation by rail is not in vain. Indeed, in the 1998 year (in the pre-default period) and in the 2008 year (in the run-up to a large financial failure), it was the sharp decline in freight volumes that manifested itself in Russia faster than all the other negative points up to the subsidence of the ruble. It turns out that if the drop in freight traffic becomes a trend for several months, then economic shocks will again await us. I would like to think that this is not the case, and that this time we are reliably protected by the airbag in the form of consistently high oil prices and the availability of the Stabilization Fund, but ... After all, the wave of crisis (if it manifests itself again) is precisely in oil prices and hits. So it was in 2008, and in earlier periods. And if we take into account that even with oil prices at the level of 105-120 dollars per barrel, the Russian financial system cannot get out of the 3% growth, then hope that everything will be “ok” if prices fall, for example, below 75 dollars per barrel is not necessary. But will the Stabilization Fund withstand such a fall? - is also a big question. After all, if we consider that the lion’s share consists of investments in Western economies, from which the main crisis threat emanates, then hope somehow disappears altogether.

The most surprising thing is that not only opposition economists express words about the need for change in the country's economy. Many experts in the financial sphere, who are in power, are also actively talking about this. But so what's stopping you? .. The personal interest of certain gentlemen or some external lobby, or both? But if it interferes, then it is necessary to pull yourself together and overcome barriers, and not to deal only with the repeated designation of a problem, all the more so as it does not denote it today only hopelessly lazy.

But either they are being shy, or they are afraid to do something wrong ... Although, there would be something to fear ... After all, everything that was not so economically possible could be done has already been done. So: from words - to business, gentlemen economists. To the point.

We are in Yandex Zen
171 comment
Information
Dear reader, to leave comments on the publication, you must to register.