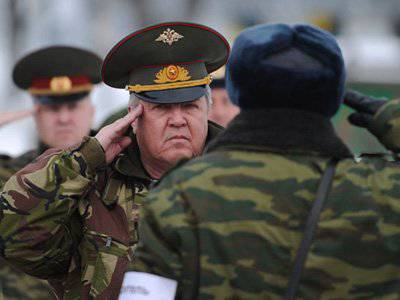 In the Internal Troops will serve only the pros. The commanders of units will be able to select candidates for contract service in this power structure themselves, without military registration and enlistment offices. This is prescribed by important changes to the Federal Laws "On the Interior Troops of the Ministry of Internal Affairs of the Russian Federation" and "On Conscription and Military Service," published today in the Rossiyskaya Gazeta. They change the mechanism of manning the internal troops of the Ministry of Internal Affairs of Russia.


By and large, the document signed by the president of the country will affect the life of not only nearly two hundred thousand servicemen, but also millions of other people. It will significantly speed up the process of complete transition of this most important and numerous power structure to a contract service. This means protecting nuclear facilities, ensuring security of rallies, gala concerts and football matches, will not be confronted by terrorist soldiers who served less than six months, but only by professionals.

Nikolai Evgenevich, will you accept soldiers for the competition?

Nikolai Rogozhkin: We are talking about the right of internal troops to carry out an independent admission to service under the contract.
Including on a competitive basis, along with the military commissariat.

How do you do without military offices?

Nikolay Rogozhkin: A person who has served military service by conscription and who wished to enter contractual service in the internal troops of the Ministry of Internal Affairs of Russia, along with the military commissariat, can now apply directly to a specific military unit. This is convenient, because military units of internal troops are stationed in almost every region, and a person can serve close to home.
How was it before? A candidate for contract service came to the military registration and enlistment office, where he was registered with the military, wrote a statement, and the military commissar sent him for a month to complete the necessary, so to speak, procedures. This is a medical examination, professional psychological selection, verification of the level of education, professional and physical training and, in fact, the military enlistment office's commission on selection for contract service. If the person met the requirements, he was given an order to a military unit to conclude a contract.

Do you expect that the new order of recruitment will allow taking on the service of the best quality fighters?

Nikolai Rogozhkin: Former method of recruitment - note contract servicemen! - was long and did not allow to select people more qualitatively. Moreover, I know of cases when the military registration and enlistment offices refused to send those who wanted it to the internal troops and issued orders to other military units. After all, the military enlistment office is a territorial body of the Ministry of Defense.
Now, the decision about whether a person is suitable for contract service or not is taken personally by the commander of the unit?

Nikolai Rogozhkin: Absolutely. In principle, the procedure remains the same - a medical examination and other checks and commissions. And the treasury does not require any additional costs. But another thing is important here - the commander now bears personal responsibility for the person he has accepted to serve. Looking at him, he can offer him the position that, in his opinion, suits him best. And if something happens, they will no longer be able to nod at the military registration and enlistment office - they say, they sent me such a “frame”. I took it myself and answer it myself. It is clear that now any commander will react to such a question very scrupulously. And I am sure that the quality of the selection of people will only increase.
On the other hand, the contractor himself, as they say, “will not blindly” come to the part “where they sent him”, but quite deliberately. He will personally see where and with whom he will serve and what to do. This will be his deliberate choice, and before the conclusion of the contract, he still has time to abandon the intention to serve.
It is known that according to the same principle, employees are selected in the FSB and FSO. Probably, this is due to the special secrecy regime that distinguishes the special services. And why such an exclusive right to internal troops?

Nikolai Rogozhkin: Then, that the internal troops perform service and combat tasks associated with the risk to life. This participation together with the internal affairs bodies in the protection of public order, ensuring public safety and the state of emergency. The units of the internal troops are involved in the fight against terrorism and ensuring the legal regime of the counterterrorist operation, guarding important state facilities and special cargo. Among our tasks is participation in the territorial defense of the Russian Federation, rendering assistance to the border agencies of the FSB in protecting the State Border.
And a citizen, contacting the commander of a military unit with a statement about entering military service under the contract, if there are vacant military posts, first of all inquires and receives information about what service and combat tasks this military unit performs and in which events it participates. He explained to what position he can be accepted. That is, he agrees to risk himself, consciously. The new law makes contract military service in the internal troops more transparent, open and accessible, so that everyone has a complete understanding of the tasks and conditions of such service.

Is there a large choice of positions that can be served under a contract?

Nikolai Rogozhkin: Big. The structure of the troops includes military units for operational purposes, special motorized military units. There are shelves for the protection of important state facilities and special cargo, parts aviation, marine, reconnaissance and special purposes. Everywhere there are posts of rank and file, sergeants, ensigns and officers.

Are there many who want to serve in the internal troops under the contract?

Nikolai Rogozhkin: A lot, especially in the regions. On average, our military units are staffed by contract servicemen by half, quite a few, and more than 80 percent. In general, the manning of internal troops with soldiers and sergeants is 98 percent.
In connection with the changes in the law, the internal troops are ready in three years to completely switch to the formation of professionals, to abandon the draft?

Nikolai Rogozhkin: Contract service largely depends on the social package, which is offered to the soldier. This includes salary, housing, the possibility of preferential studies at universities, the placement of children in institutions, and much more.
Yes, we are already provided with money. A soldier who has just entered the contract service receives about 20 thousand rubles in the first months. And this is just the beginning. Then various bonuses, surcharges, payments for classiness, complexity, tension and so on will go. Maybe for the capital it is not much, but in other regions it is very significant. Say, a husband and wife serve together, for example, they receive, according to 30, thousands. They have service housing, they give out their uniform, food - again in the canteen of the military unit. Virtually no spending, all savings are on a credit card. You see, in a few years, such a family can save for their own apartment - if not in Moscow.
And yet, housing is one of the most important components of the social package. How painful is this problem for internal troops?

Nikolay Rogozhkin: There is a problem, of course, and we are solving it. I will not load in figures, I will say that we are going in all possible ways permitted by law. Well, of course, as far as our finances allow. Service housing stands out, military mortgage works. There is such a practice - for bachelors converted into hostel barracks. That is, contract employees are created quite decent living conditions - separate rooms, kitchens, showers, recreation areas. A person has a place to come after the service, tidy himself up, somehow get distracted.
But, frankly, I think that such re-equipment is not a way out of the situation, but a temporary and forced measure. The contractor is not obliged to live in the location of the part, in the military camp. In the military unit he serves, but he must rest and spend his free time at the checkpoint. Why do we create such conditions only for family soldiers? What is already there, we were all young, lieutenants, met with girls, created families. But is it possible to create a family in the barracks, even if it is well-maintained? Therefore, we will try to build more high-grade service housing and hostels.
Will the uniform change? The Ministry of Defense already intends to abandon the current field form, the so-called "digit".

Nikolai Rogozhkin: Time will tell. Our colleagues in the Ministry of Defense have developed a new version of the "vole" and will take on the test 100 thousands of experimental kits. According to the results of these tests, a decision will be made. And the internal troops are fully provided with everything necessary, including clothing and equipment. Remember, when there were severe frosts, we of our servicemen, who provide order on the streets, were dressed in sheepskin sheepskin coats and felt boots with galoshes. It does not matter that they are not very fashionable. The main thing is that the soldiers do not freeze and stay healthy.
Is it true that in the structure of the internal troops some new special forces detachments are created, super-trained and super-armed? If so, what is their purpose?

Nikolai Rogozhkin: Indeed, we handed over to our colleagues from the Ministry of Defense Tanks and large caliber artillery. Such weapons do not meet the challenges facing the internal forces today. Now in service mainly light armored vehicles are used - BTR, BMP, BRDM. But they are gradually being replaced by Tigers and armored Urals - there, of course, where it is required. The fact is that our units often have to act in settlements, move along busy roads. Army armored vehicles - armored personnel carriers and infantry fighting vehicles - are not involved in road traffic; they must be accompanied by traffic police vehicles. But “Tigers” and “Urals” such support is not required.

Ctrl Enter
Noticed oshЫbku Highlight text and press. Ctrl + Enter
We are
No strategic reservesMilitary reform as an integral part of the security concept of the Russian Federation: Systematic dynamic assessment
Military Reviewin Yandex News
Military Reviewin Google News
64 comments
Information
Dear reader, to leave comments on the publication, you must sign in.