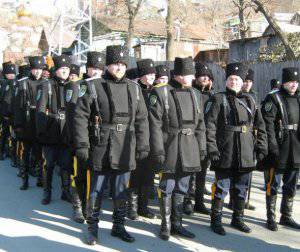 The events that took place in Zelenokumsk on the night of 26 on 27 on November 2010 of the year forced us once again to take up pen and paper to appeal to the authorities. For now only pen and paper. But we clearly understand that this is not the case. weaponthat can stop the rampant crime and protect us and our families from the mayhem that is happening in the North Caucasus.

Practically all print media and television channels in recent weeks have Cossacks garnered in connection with the massacre of civilians in the village of Kushchevskaya, Krasnodar Territory. With irony, the atamans are asked: “And where were you, the Cossacks, when children were killed under your nose?”, Without listening to any arguments or explanations.

In our case, the situation is different. Men rose to the defense of the 15-year-old girl. Having stood up for the girlish honor, four people with gunshot wounds were in the hospital.

God knows, with all our strength we have always tried to maintain peace and not inflate the constantly smoldering fire in the Caucasus, but our losses have been too great lately, and too often they provoke us to respond.


The authorities are trying to reassure and with the help of the media to convince that everything is not so scary, they say, let’s give concrete facts, who forces you, who presses you? Here are the facts.

Tears on the eyes of relatives after the death of Kizlyar ataman Peter Statsenko had not yet dried up - the gangsters shot him near his home. That Cossack girl from Pyatigorsk, who a couple of months ago the Cossacks beat off the bandits by force, did not forget her fear. It was not yet time to restore the destroyed temple of the village of Rozhdestvenskaya in Ingushetia, as its dome was again shot.

But can anyone name at least one case when a Cossack or a Russian tried to take a Chechen girl by force? Or maybe someone from the Orthodox shot the mosque? No one will blame the Cossacks for this, because there are no such examples!

So what is waiting for our government? We live in a legal state and do not want to break the law. But so that we can walk peacefully on our land and not be afraid for the lives of loved ones, the government must provide us with peace and order. The Cossacks can not oppose their daggers and checkers firearms!

History knows who is the true owner of these lands. No need to even look into the books. The Cossacks settled and mastered these lands and the proof of this is the village and the hamlet - originally Cossack settlements! Notice, not villages, but villages! Kotlyarevskaya, Yessentukskaya, Naurskaya, Kochubeevskaya ... So why do we create unbearable conditions for living on the original Cossack and Russian territory? We do not intend to tolerate dirty sorties that end with the blood of our brothers.

For our hospitality we are answered with blood. What are these guests who are tired of the hosts? You came to our villages, but we are not to your villages! And if you came, then follow our rules and live according to our Russian laws! We always welcome guests, but we don’t need to go to us with our own rules, and, moreover, if you please, leave your weapons at the door!

Our ancestors - the Cossacks could stand up for themselves! And now again the bloody events are spreading across the territory of the Caucasus, like an epidemic of plague. A very difficult state of affairs in the republics, but today the waves of conflicts are more and more often rising to the Stavropol region. Events similar to what happened in Zelenokumsk, at one time served as the beginning of the exodus of the Russian-speaking population from the republics of the North Caucasus. It was such illegal actions that forced and compel Orthodox residents to leave the land of their ancestors. To stop this process, it is necessary to take the most urgent measures, and the state should protect its citizens. But if it does not, then the answer suggests itself. We are not going to create the same mess, but we will not allow to burn our homes, kill mothers and children, rape wives and daughters. And if the state and the authorities in it are not able to ensure the safety of our families, we will have to take care of this ourselves.