Loss of the USA in Afghanistan, or new Yankee games in the region 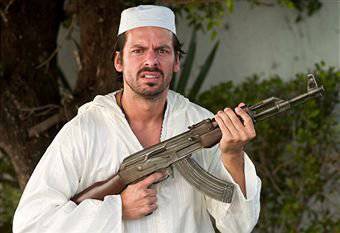 The American military airbase at the Manas airport in the capital was opened in Kyrgyzstan immediately after the attacks of terrorists on the shopping centers in New York in the autumn of 2001. The Americans convinced everyone that they were going to fight terrorism around the world, namely, Al-Qaida and its allies.


Who turned out to be Al Qaeda's allies for the United States? Of course, this is Saddam Hussein, who was executed by the "situational" US allies in Iraq. The al-Qaeda’s allies were also a long time the Taliban, until it was again confirmed historical the Afghan law and it became clearly clear that the Pashtun majority of Afghanistan, which is the main backbone of the Taliban, will still not allow NATO forces to prevail. Moreover, a situation has developed in the country where officers of the anti-terrorist coalition forces are literally buying off the Taliban so that they do not attack the coalition soldiers.

The Americans first fought the Taliban, then agreed, then began to destroy them, turning the country into scorched earth. In one of the issues of the Washington Post newspaper, it was reported that the CIA carried out paramilitary operations in southern Afghanistan since 1997. The article mentions a certain Bob Woodward, who said on the pages of the publication some details about the role of the CIA in the then military conflict between the Taliban and the Northern Alliance, which included the deployment of a secret militarized unit called the Special Operations Division. This unit, according to Woodward, consisted of teams of about six people who did not wear military uniforms. "The unit had about 150 militants, pilots and specialists and consisted mainly of veterans who retired from the ranks of the US armed forces," Woodward said. He also said that 18 months before the start of a major US counterterrorism campaign in Afghanistan, the CIA collaborated with the tribes and warlords in the south of the country, and division divisions helped create a significant new network in the region where the Taliban positions were strongest.

Thus, it is known that the Americans even before the events of September 11 in New York conducted military operations against the Taliban, who at that time represented, in fact, the current government in Afghanistan.

In the book “Bin Laden, the forbidden truth,” written by French authors Jean Charles Brizard and Guillaume Dasku, it is reported that before the September 11 attacks, the Bush administration wanted to recognize the Taliban regime, despite charges of supporting terrorism, if it cooperates on development plans oil reserves in the region of Central Asia. Until August 2001, the authors of the book say, the US government considered the Taliban a source of stability in the region, which could contribute to the construction of an oil pipeline through Central Asia. But after the Taliban refused to accept the conditions of the United States, the Americans reconsidered their attitude towards them.

The book says that shortly after Bush’s inauguration in February 2001, negotiations began between the Bush administration and the Taliban. The Taliban emissary arrived in Washington in March 2001 with gifts for the new head of state, which included an expensive Afghan carpet. However, the Taliban did not want to accept the conditions of the Americans, and this set a pronounced negative tone to the negotiations, it came to the fact that at one of the moments the US representatives told the Taliban: “Either you accept our offer of gold-covered carpet, or we will bury you under the carpet of bombs ".

The escalating negotiations between the Americans and the Taliban were interrupted by 2 August 2001 g, after the last meeting between US envoy Christina Rocca and the Taliban representative in Islamabad. Two months later, the United States and its allies invaded Afghanistan, Brizard writes.

After these bombings, 11 years passed, the Americans bombed not only Afghanistan, but also invaded the territory of neighboring Pakistan.

As a result, it turned out that the Taliban, having withstood, in fact, the “world-wide” military onslaught under the leadership of the United States, could not only withstand, moreover, they began to inflict significant damage to the invaders in manpower and equipment. The morale of the coalition forces was at zero. Europeans in Afghanistan, without much enthusiasm, enter the battle, or simply pay off money from the Taliban, waiting for the deadline for demobilization, experts say.

The military operation of the Americans against al-Qaida, and in fact against the Taliban, gradually came to an expected and predictable deadlock. The apotheosis of the American counterterrorism campaign in Afghanistan was a statement by Vice President Joseph Biden in an interview with Newsweek published in December 2011 in which he stated that the Taliban itself was not an enemy of America. The President of the United States, according to Biden, never said that the Taliban are “our enemy only because this movement threatens our interests.” However, we recall that the head of the US administration has repeatedly stated that he considers Afghanistan, and not Iraq, the main front in the fight against global terrorism.

This caused a wave of indignation from politicians both in the United States and in Europe, where, at the time, at the call of the United States, troops were sent to Afghanistan - NATO allies. And suddenly it turns out that the Americans are not at war with the Taliban.

Currently, the Americans and their allies, who, in fact, "raped" this long-suffering country and its people, faced an insoluble task, namely how they intend to adequately withdraw from Afghanistan with minimal geopolitical and strategic losses for the United States and its allies ? Of course, in this case, it is not a question of the Americans leaving completely, but the withdrawal of the allies and some parts of the US Army still has to take place, because Afghanistan is, after all, an independent state. According to experts, against the backdrop of gradual victories of the Taliban, this is now a rather difficult problem for the United States.

In November and December last year, two major conferences were held in Waziristan with the participation of the leaders of the Taliban movement and a number of Al-Qaida field commanders, among whom were Abu Yahya al-Libi, who was previously killed in the Western media. In January, 2012 in Pakistan hosted the final, third conference, at which five key figures were identified to manage all parts of the Taliban, both in Waziristan and in Afghanistan. Mullah Omar was proclaimed the head of the whole movement.

Today’s Taliban is not the same as it was before. According to experts, the movement may have its own initiative in the implementation of a number of geopolitical projects both in the country and in the region. If earlier the Taliban linked their initiatives exclusively with Pakistan, now with the active participation of foreign “volunteers”, including many with higher education, the Taliban projects can become quite ambitious and go against the interests of the United States or Pakistan. Recall that at the moment the Taliban have already opened their embassy in Turkey and Qatar.

According to a number of political scientists, the United States will look for ways to cooperate as closely as possible with the Taliban, if not with the whole movement, then at least with its part. At the same time, the leadership of the Taliban will make contact with the Americans with restraint and will try to impose their own conditions on them, experts say.

Against this background, the republics of the region, having built their concepts of interaction with the United States in line with the absolute military and geopolitical dominant of the Americans in Afghanistan, from the very beginning of the military campaign of the coalition forces were confident of the victory of the American counter-terrorist operation over the Taliban. Now everything can be different. Americans traditionally can just beat everything, having established close contacts with some of the Taliban leaders. And what will be offered to Pashtuns in the next geopolitical development is not yet clear.

Ctrl Enter
Noticed oshЫbku Highlight text and press. Ctrl + Enter
We are
A great interview with Sergey Lavrov: about Ukraine, Obama and IranInterview by President Bashar Al-Assad to the Sunday Times
Military Reviewin Yandex News
Military Reviewin Google News
23 comments
Information
Dear reader, to leave comments on the publication, you must to register.