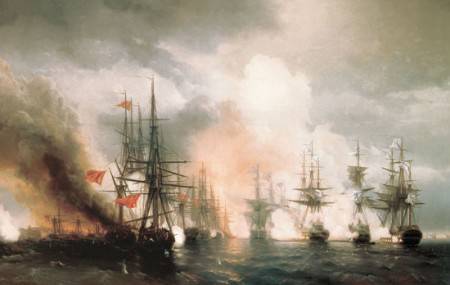 The battle at Cape Sinop was one of the first battles of the Crimean War, which began as a conflict between Russia and Turkey. The Russian army and navy had a tangible advantage over the weakening Ottoman Empire, which contemporaries called "the sick man of Europe."

Turkey, incited by Britain and France, opened military operations against Russia in 1853, marked the beginning of the Crimean War of 1853-1856. In November 1853, the Turkish squadron commanded by Osman Pasha withdrew from Istanbul and embarked on a raid in Sinop, preparing for the landing of troops in the area of ​​Sukhum-Kale (Sukhumi) and Poti. It had 7 frigates, 3 corvette, 2 steamer, 2 brig and 2 military vehicles, a total of 510 guns and was protected by coastal batteries (38 guns).

Russian squadron under the command of Vice Admiral P.S. Nakhimova, learning about the location of the Turks, blocked their squadron from the sea. It consisted of 6 battleships and 2 frigates (a total of 720 guns, including 76 "bomb", that is, firing explosive shells. Since the Turkish squadron on the high seas could be reinforced with ships of the Anglo-French fleet, who was standing in the bay of Beshik-Curtez, in the Dardanelles, Nakhimov decided to attack and defeat her directly in the base. His plan was to quickly (in two wake columns) bring his ships to the Sinop raid, anchor them and decisively attack the enemy from a short distance (1-2 cables; cables - one tenth of a nautical mile, about 185,2 meters )

The Sinop naval battle began on 18 (30) on November 1853 of the year in 12 hours of 30 minutes and lasted until 17 hours. The first to open fire on the Russian squadron entering the Sinop raid were Turkish ships and coastal batteries. The Russian ships, taking advantageous positions and using superiority in artillery, returned fire. Half an hour later, the Turkish flagship Avni-Allah and the frigate Fazly-Allah, enveloped in flames, ran aground, then other Turkish ships were set on fire or damaged, the Turkish coastal batteries were destroyed or destroyed. In this battle, the Turks lost 15 from 16 ships and over 3 thousands of people killed and wounded. About 200 people were taken prisoner, including Osman Pasha himself and the commanders of the three ships. The losses of the Russian squadron were 37 people killed and 235 injured, some ships were damaged.

The defeat of the Turkish squadron in the Battle of Sinop significantly weakened the naval forces of Turkey and thwarted its plans to land its troops on the coast of the Caucasus. Sinop naval battle was the last in stories a major battle of the era of the sailing fleet. To replace sailing ships began to come ships with steam engines.

In the Battle of Sinop, the naval talent of the outstanding Russian naval commander Pavel Stepanovich Nakhimov was clearly manifested. This is indicated by the decisive actions of his squadron in the destruction of the enemy fleet at its base, the skillful deployment of ships and the use of "bomb" guns by them. The high moral and combat qualities of the Russian sailors and the skillful leadership of the combat actions of the ship commanders are also indicative. The high effectiveness of the "bomb" guns subsequently accelerated the transition to the creation of an armored fleet.
Ctrl Enter
Noticed oshЫbku Highlight text and press. Ctrl + Enter
Military Reviewin Yandex News
Military Reviewin Yandex Zen
Add a comment
Information
Dear reader, to leave comments on the publication, you must sign in.