March 5 2013
11
At the beginning of the 20th century, Russia was a recognized leader in the development of the Arctic Ocean. Extensive trade routes, vast undeveloped territories, washed by the northern seas and polar expeditions - all this required the development of maritime transport, able to cope with the harsh Arctic conditions and ensure the implementation of the tasks of developing the Russian north.
It is for this reason that an icebreaking fleet appears in Russia. For half a century the first-born of the Russian icebreaker fleet Ermak and Svyatogor were the most powerful ships of this class in the world.

Svyatogor, which will later be renamed Krasin, will improve the design of the first Russian icebreaker Yermak and for several decades set the general line in the development of Russian icebreaking industry.
For almost 70 years of his career, he will write many historical milestones in your logbook - flooding and then rising from the bottom of the sea; the rescue of the Arctic expedition of Umberto Nobile and the escort of allied convoys during the Second World War; passage by the northern route to America and 885-day circumnavigation of the world.
And in the 1980 year, the icebreaker "Krasin", becoming on eternal parking in Leningrad, becomes a ship-museum, operating to the present day ... 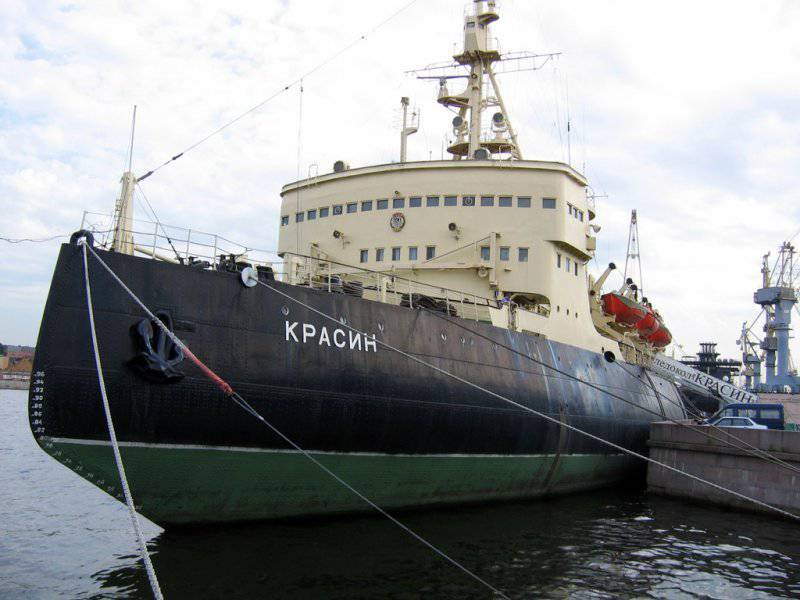 2. Icebreaker "Krasin" in the construction wore the name "Svyatogor". By the end of the first decade of the new twentieth century, one Arctic Russian icebreaker "Yermak" is not enough to support work in the Arctic. "Ermak" for a long time had no equal among icebreakers in strength and power. And in 1911 - 1912, on the initiative of the Baltic Fleet Commander, Vice Admiral N. O. Essen, the question was raised about the need to create a second icebreaker of the same type. At the same time the technical assignment for the construction of the vessel was developed, but the high project cost did not allow the leadership of the Maritime Ministry to place this order.
However, in early January 1916, Russia returned to this issue and it was decided to build an icebreaker with three screws and a capacity of 10 thousand hp, capable of overcoming the ice up to 2 meters thick and in the same year a contract was signed with the British company Sir Armstrong, Whitworth and Co. " The new icebreaker Svyatogor was built taking into account the operating experience of the Ermak and was somewhat superior to it in tactical and technical data. 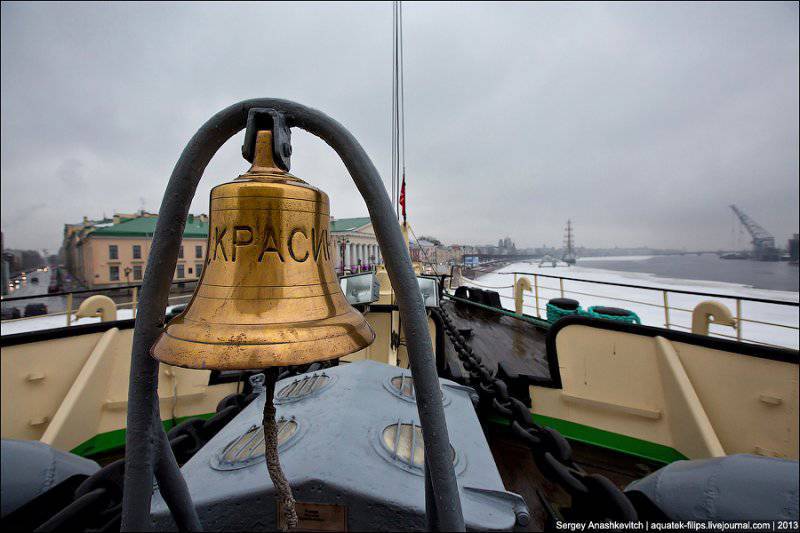 3. Work on the construction of the icebreaker were conducted at a rapid pace. On January 12 the material for the keel was ordered, and by May one third of the hull mass had been collected, the drawings of the internal layout of the ship's premises had been fully developed. Just a few months later, on August 3, the ship was launched, and two days later an icebreaker escorted by eight destroyers was towed from Newcastle to Middlesbrough, where steam engines began to be placed on it. October 1 1916 of the year "Svyatogor" was enrolled in the lists of the Russian Navy in the class of sea icebreakers, and March 31 of the year, the St. Andrew flag was raised on the icebreaker. "Svyatogor" was enlisted in the flotilla of the Arctic Ocean.
It took a little more than a year to build, run tests, reception procedures and enrollment of a new icebreaker.
This is the beginning of the 20th century. It just suggests a parallel with the modern bureaucratic machine, kickbacks, gigantic expenses and terms of the same fairly large-scale projects, after which it becomes just sad. 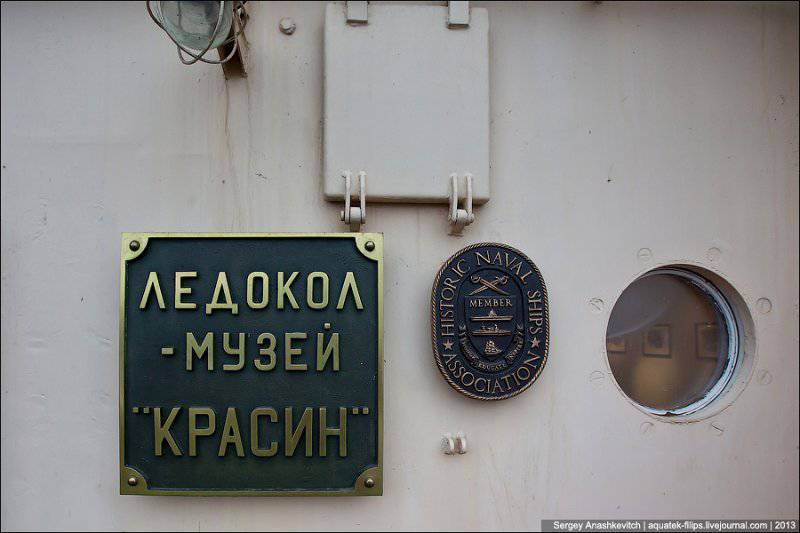 4. It takes only a year and 1 August 1918 g icebreaker "Svyatogor" decide ... to flood on the sea route to Arkhangelsk, to block the path of the invaders to the important port for proletarian Russia. After some time, the British raise the Russian icebreaker, and it continues to perform its functions, but under the English flag. 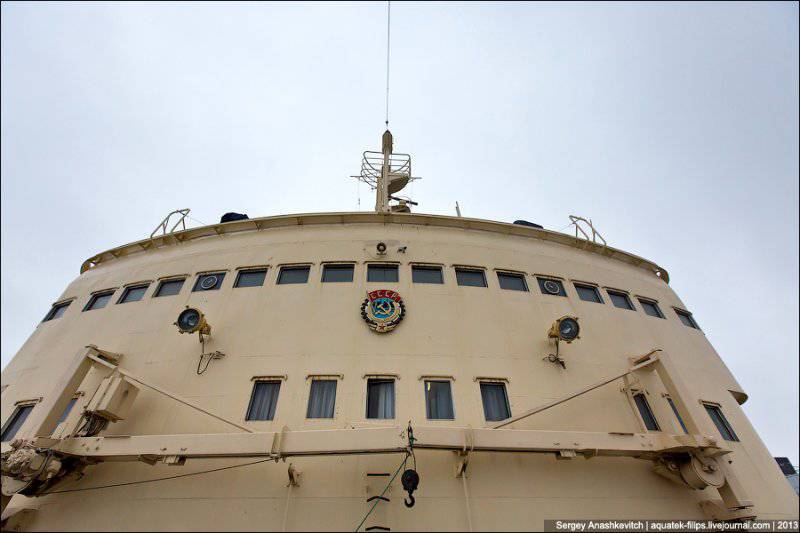 5. In 1921, Svyatogor was bought by the People's Commissariat of Foreign Trade of the RSFSR with the personal participation of the plenipotentiary LB Krasin from the British and returns to service in the Russian fleet, and after 7 years it will be renamed in honor of Leonid Krasin 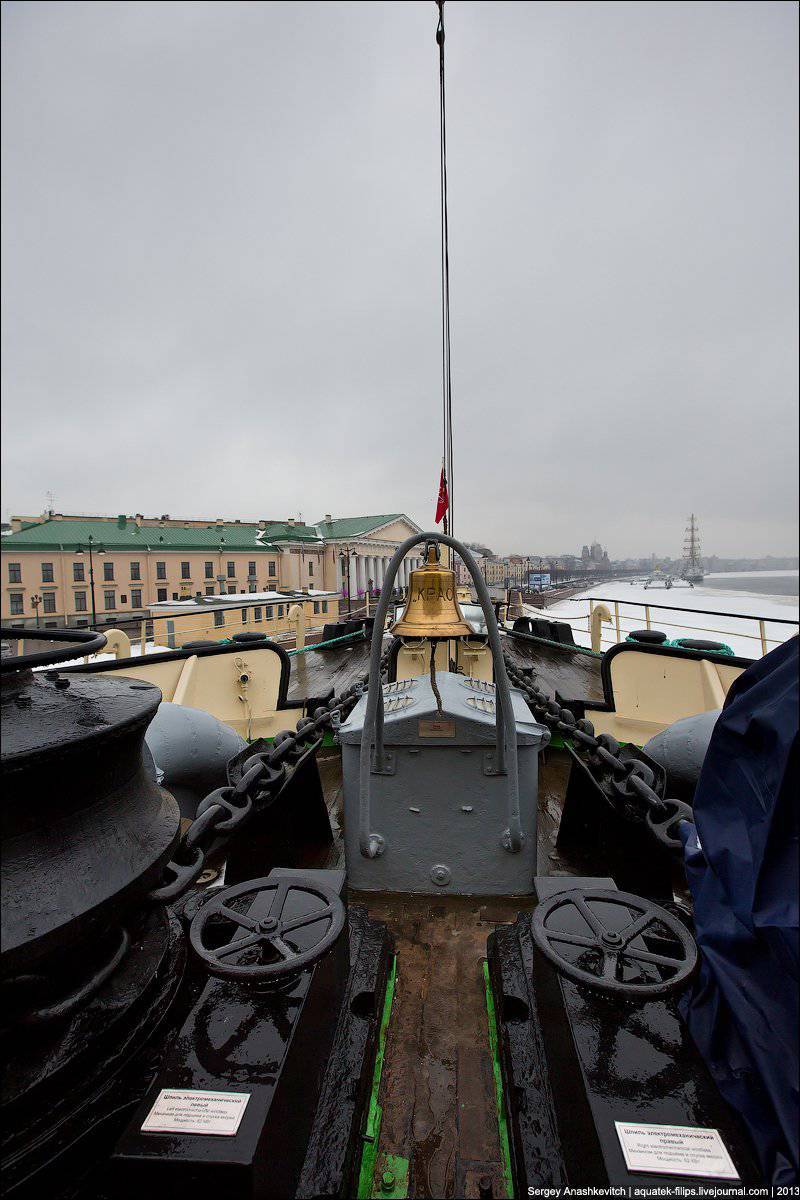 6. In 1928, the icebreaker "Krasin" becomes world famous - that year he took part in the rescue of the Arctic expedition Umberto Nobile, which survived the crash of the airship "Italia".
In 1928, an expedition from 16, under the leadership of Umberto Nobile, set off to the North Pole on a new airship, named after its homeland - "Italy". The airship launched from Svalbard 11 in May 1928, flew over the pole and landed safely in Alaska. Then the crew conquered the North Pole and the "Italy" lay down on the opposite course, and on May 25 the connection with the airship suddenly broke off. About what happened, the whole world found out only in 9 days. The crew consisted of 16 people, among them were two foreigners: the Swedish geophysicist F. Malmgren and the Czech physicist F. Beguonek.
Towards the scene of the tragedy, ships moving under the flags of different countries began moving among the heavy ice, and planes with international crews flew on board. In total, at least one and a half thousand people participated in the rescue operation - nothing like this had yet happened in the Arctic. It was the first international rescue operation in the history of mankind, in which 18 ships and 21 aircraft from six countries participated. The Norwegian scientist, once a friend and like-minded person, and then an rival and detractor of Nobile, Roald Amundsen, learning about the disaster, immediately went to the rescue of the polar explorers. Unfortunately, the rescue expedition was not without casualties. Three Italian pilots died when they returned to their homeland, and the French-Norwegian crew of the Latham-47 seaplane, on board of which Roald Amundsen, disappeared as well. Nobile himself was taken out of the camp by the Swedish pilot Lundborg, who managed to freeze. However, the second flight of Lundborg was not so successful. The plane crashed, and the pilot himself remained to wait for help on the drifting ice floe. Lundborg was saved only two weeks later. The rest of the group was rescued by the Krasin icebreaker team.
In memory of the rescue expedition on the icebreaker "Krasin" stored part of the shell of the airship "Italy" Umberto Nobile 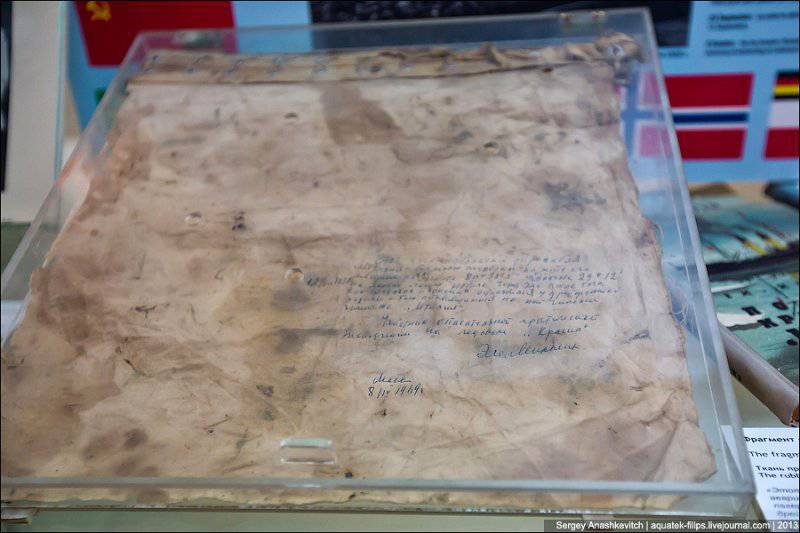 7. Since the beginning of the war, icebreakers have become warships, which were assigned the responsible task of ensuring the escorting of convoys in ice conditions. We can judge the importance attached to the icebreaker fleet by the fact that Hitler promised to award the iron cross, Germany’s highest award, to anyone who drowns or disables the icebreaker. However, the Soviet Union, which possessed the most powerful icebreaking fleet, solved the task assigned to it, and fascist Germany did not manage to disorganize the convoy operations or the work of the Main Sea Route.
During the war, the icebreaker "Krasin" carried out repeated wiring of convoys with military cargoes along the northern sea route. The most important caravan, which was carried out thanks to the icebreaker, was the convoy PQ-15 - the largest of all the convoys during the war. It included 26 transports. 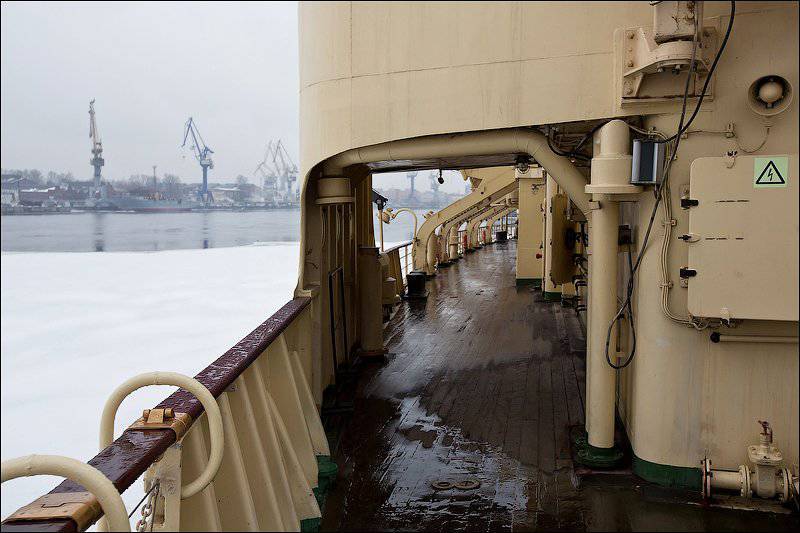 8. After the war, "Krasin" was overhauled and upgraded in the shipyards of the GDR. Its appearance is changing, now it becomes like its grandchildren - diesel-electric icebreakers of post-war construction.
In the role of the icebreaker "Krasin" worked up to 1970-x. Then, giving way to more modern ships, he continued to work as an energy source for Arctic oil exploration expeditions of the Ministry of Geology on the islands of Spitsbergen and Franz Josef Land.
At the end of 1980, the Krasin was acquired by the All-Union Society "Knowledge" and sent to Leningrad to continue service in the long-honored and honorary position of a ship-museum. Now the icebreaker camp is the quay of Lieutenant Schmidt at the Mining Institute. Currently, it is a branch of the Kaliningrad Museum of the World Ocean. 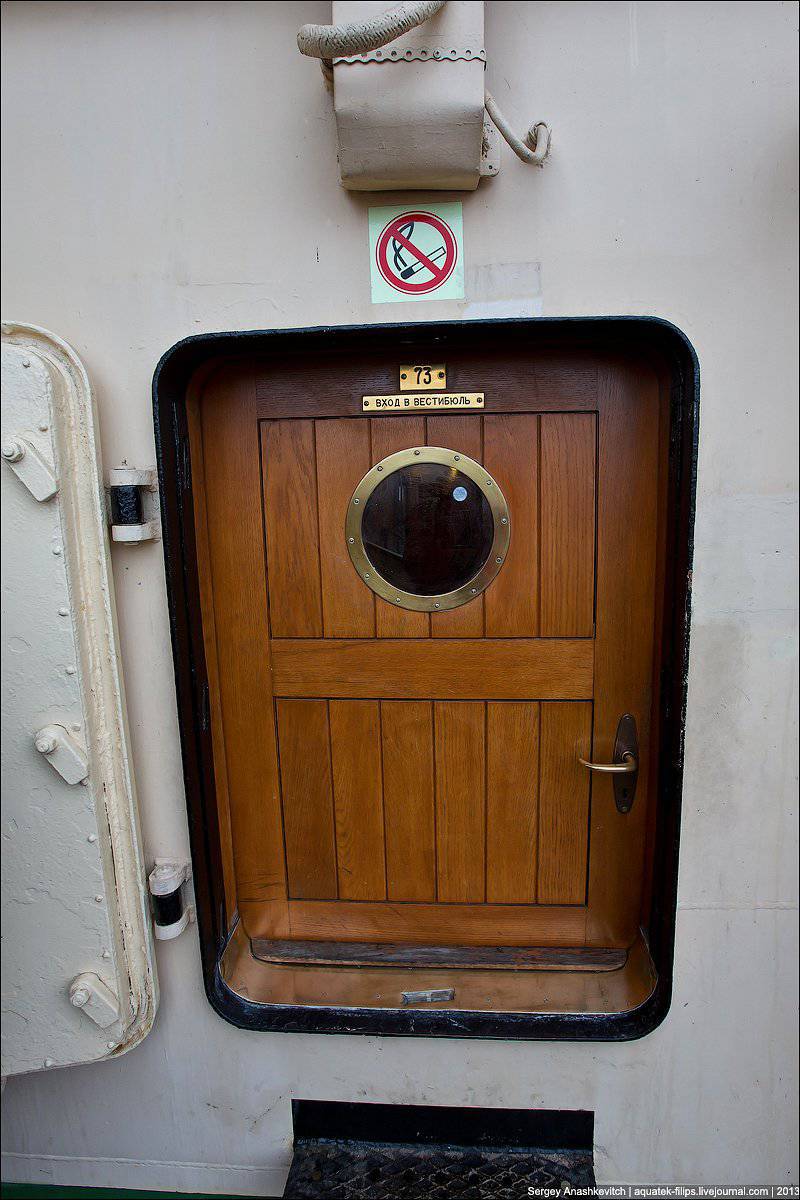 9. Navigation bridge icebreaker. From here there was a management of the ship during all its numerous sea campaigns. 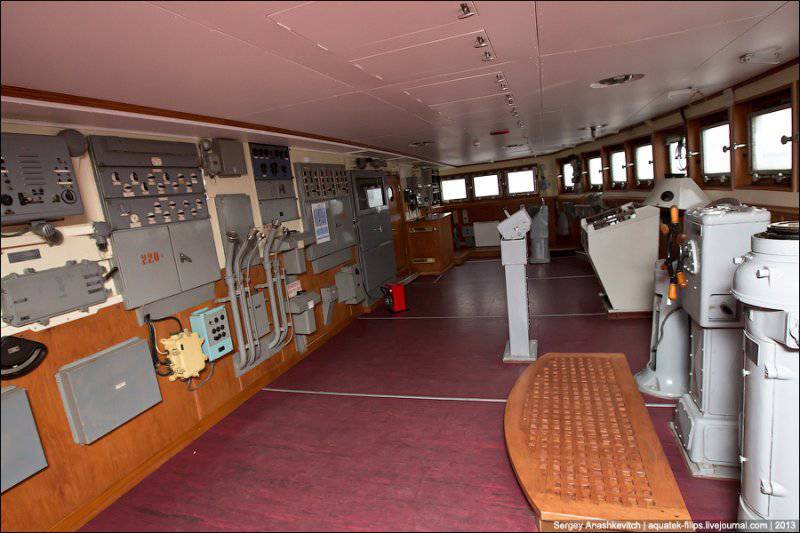 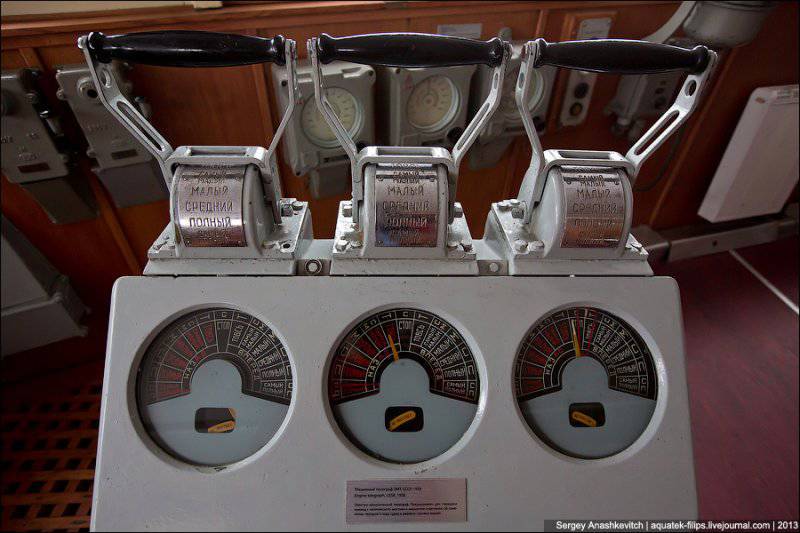 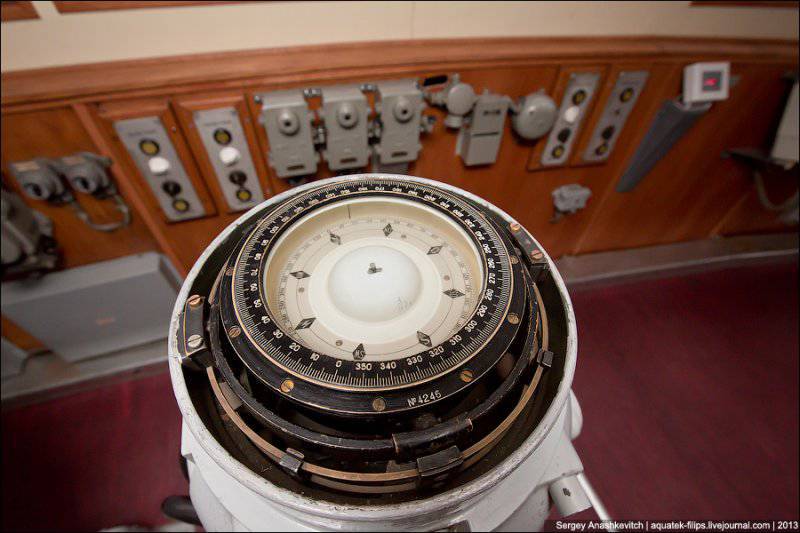 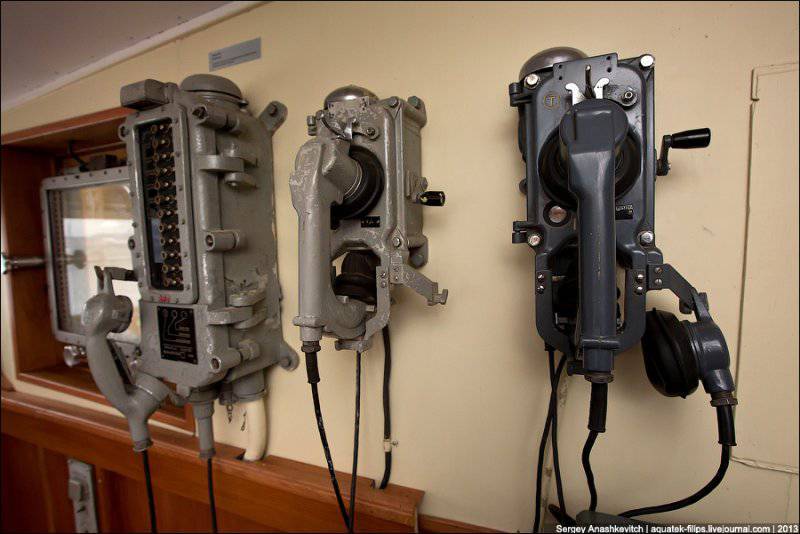 13. We get down to the lower rooms, located on the lower decks 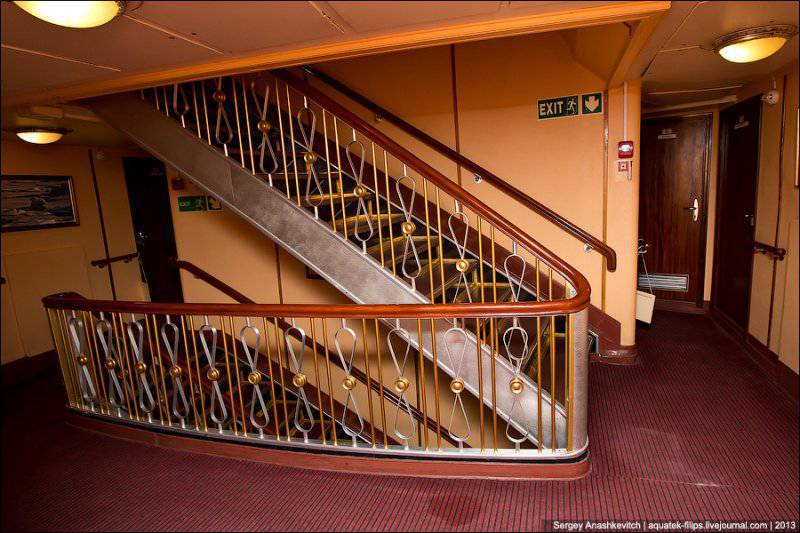 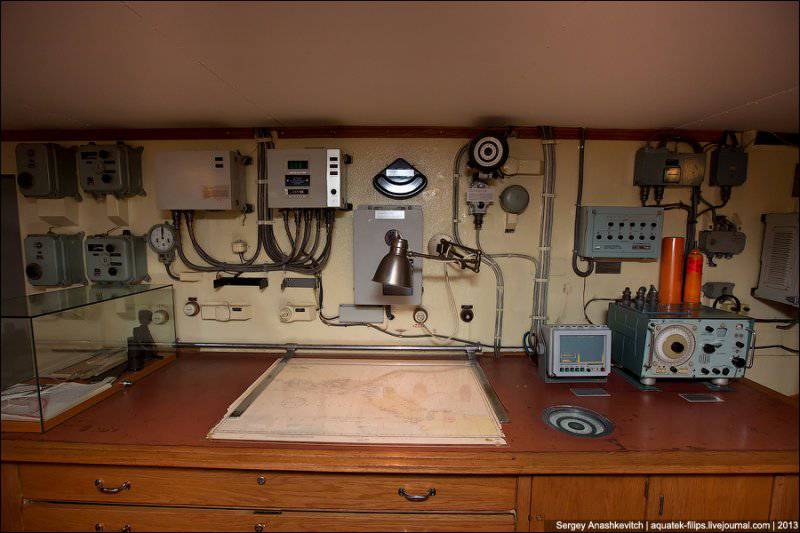 15. Here the course is being laid and entries are made in the logbook. 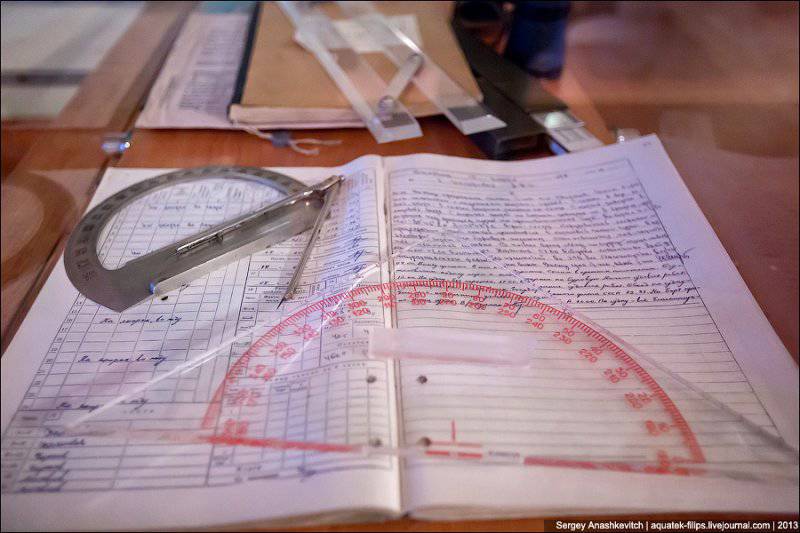 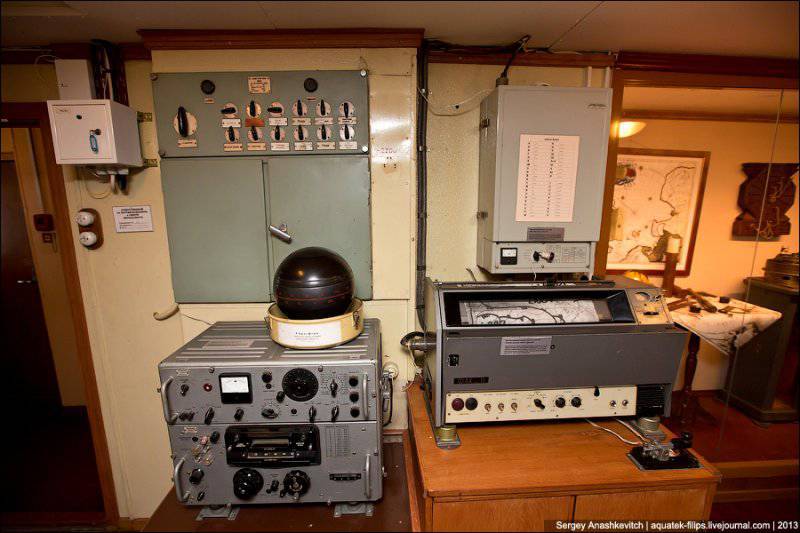 17. ... and their earlier predecessors 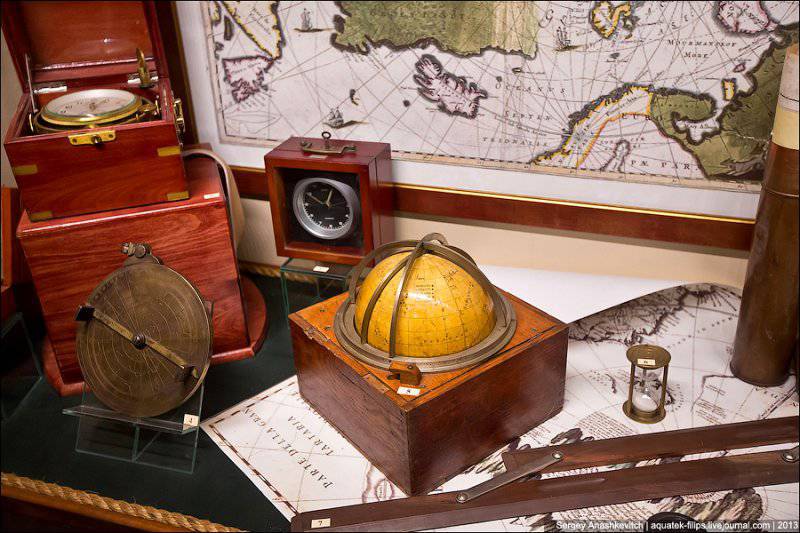 18. According to the guide, this interesting device was used to indicate the ship’s course and watch schedules for illiterate sailors who could not read 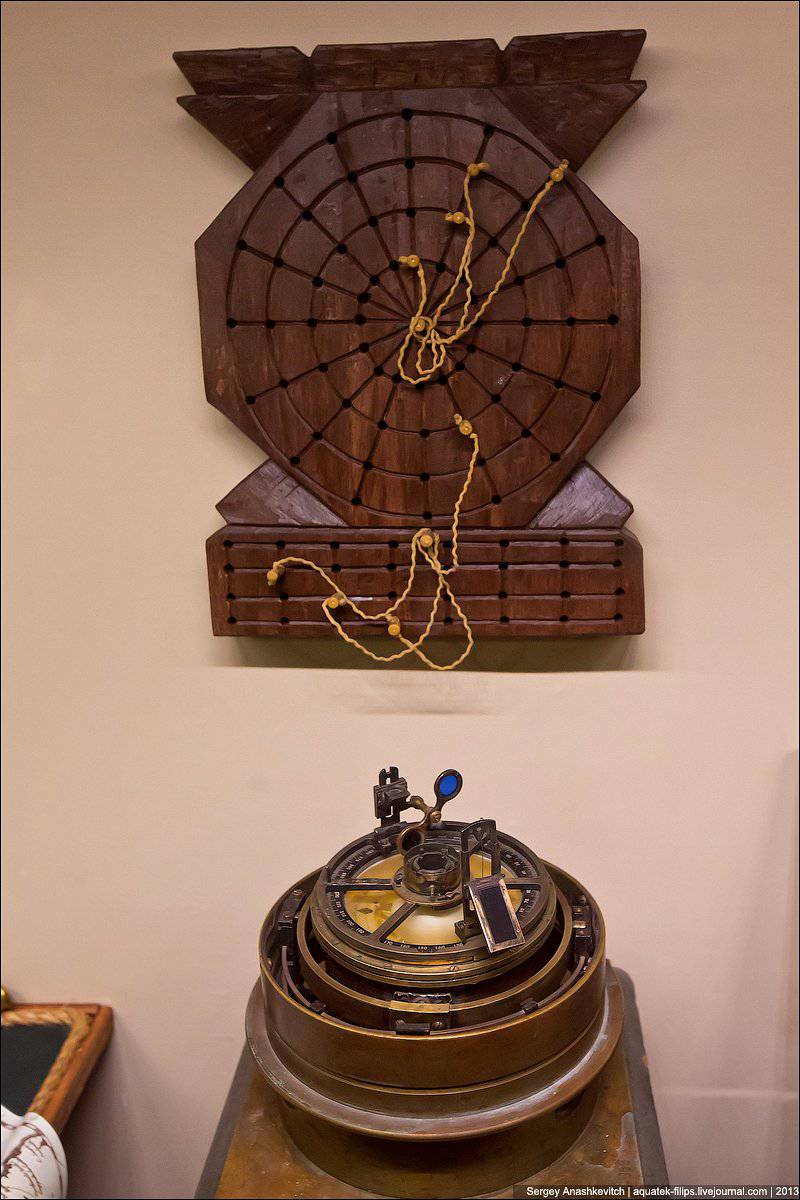 19. Exposition of navigational instruments of the beginning of the 20th century 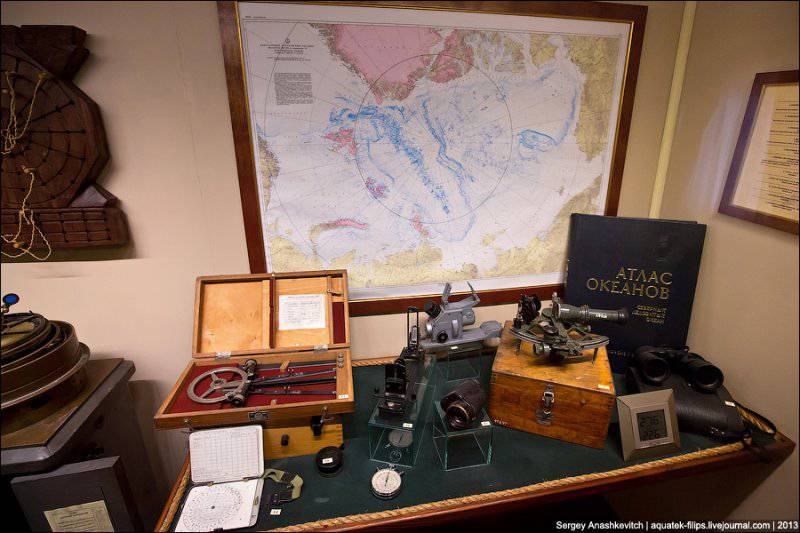 20. Captain's cabin. The first captain of the “Svyatogor” was KK Neupokoev. All in all, the 43 captain has been replaced on this icebreaker. 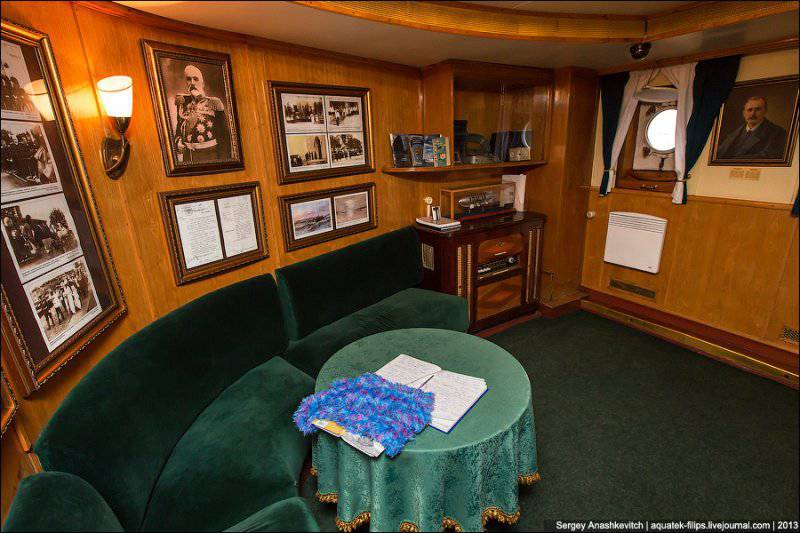 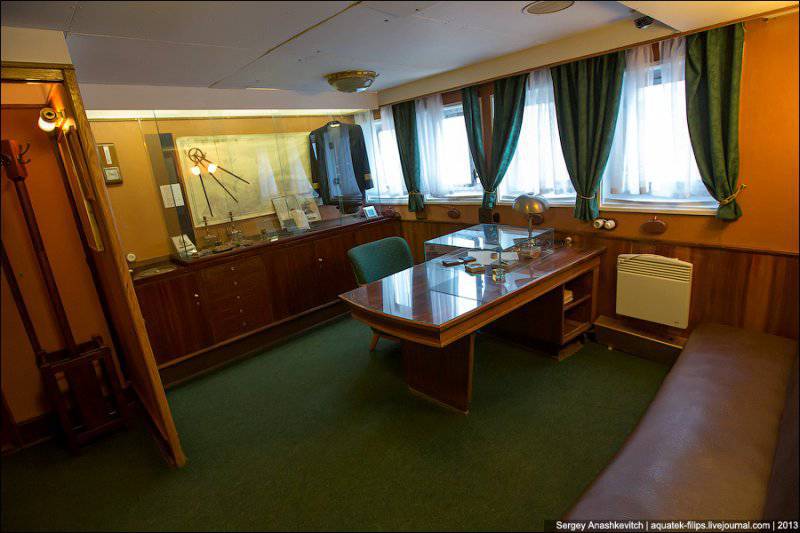 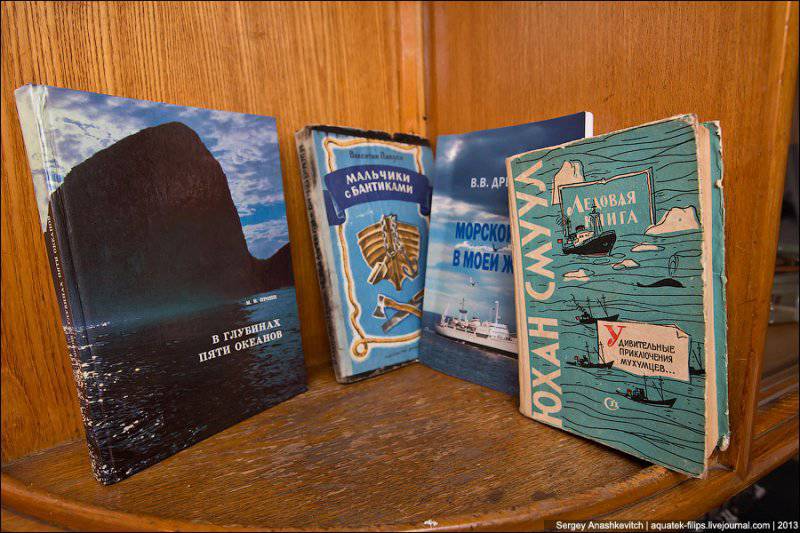 23. Radiol, a decanter and a glass in a special stand against pitching 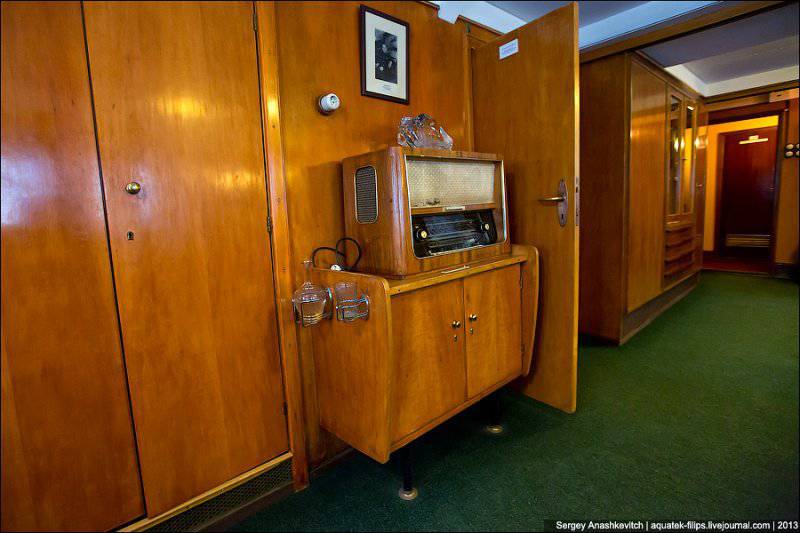 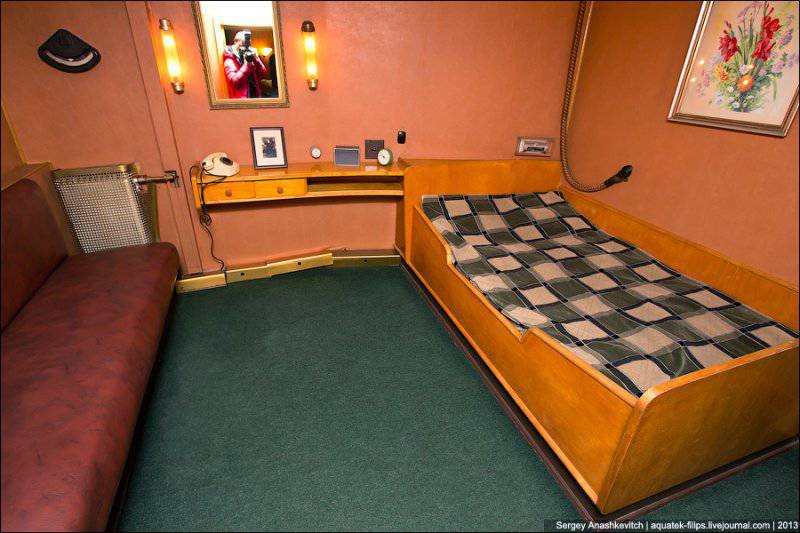 25. Captain's bathroom. If it were not for the numerous pipes under the ceiling, there would be a feeling that you are in the usual 70-s picture. 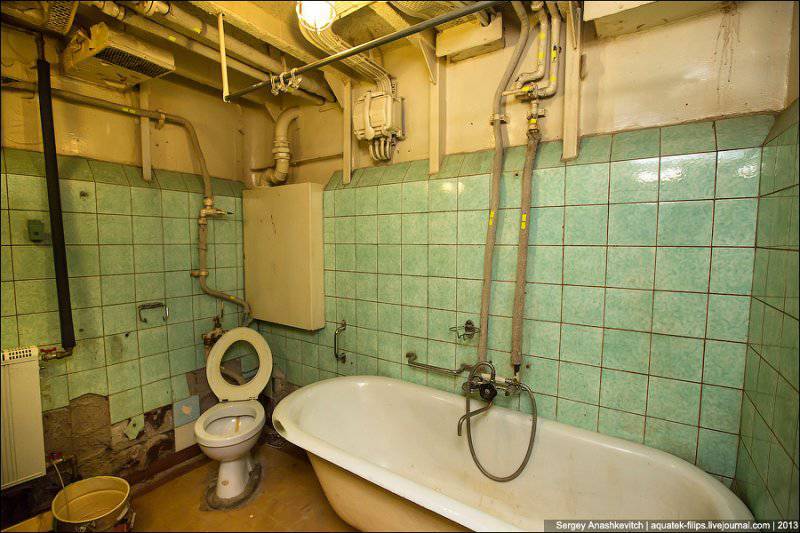 26. Despite the fact that the icebreaker has long been standing on the eternal parking, its bell still shines, even with an overcast sky, and the deck is torn to shine 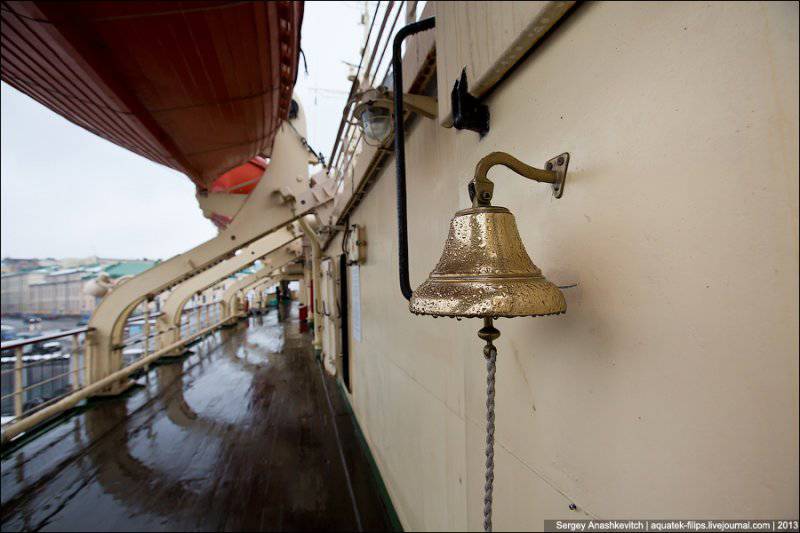 27. By the way, in 1976, the name "Krasin" was given to a new diesel-electric icebreaker, built in Finland by the Wärtsil shipyard by order of the Soviet Union. Until 1990, this icebreaker worked in Murmansk, then was transferred to the port of Vladivostok. 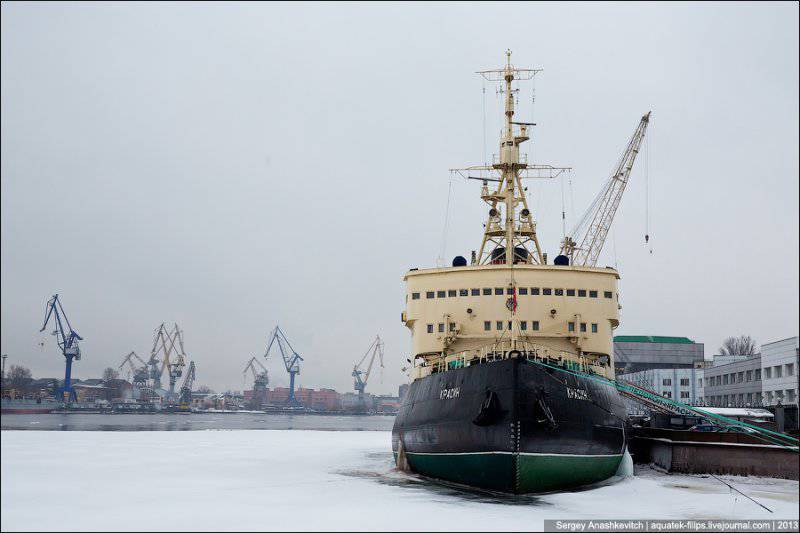 Ctrl Enter
Noticed oshЫbku Highlight text and press. Ctrl + Enter
We are
The history of the icebreaker "Baikal"The submarine "Han" - the firstborn of the Chinese nuclear submarine fleet
Military Reviewin Yandex News
Military Reviewin Google News
11 comments
Information
Dear reader, to leave comments on the publication, you must sign in.