What was in the red admiral's briefcase? 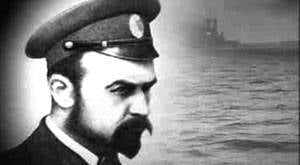 In the winter of 1918, he saved the Baltic Fleet. He brought 236 battleships, including 6 battleships, 5 cruisers and 54 destroyer ships, out of the ports of Revel and Helsingfors, from under the nose of the rapidly advancing Germans, and through the ice led them to Kronstadt. The "award" for the feat was unexpected - on the personal order of Trotsky, the hero was arrested and hastily shot, allegedly for "treason". It was the first penalty, officially perfect Bolsheviks.

We are talking about Alexei Schastny - an officer of the tsar’s fleetwhose name in Soviet times was strictly prohibited. Alexey Mikhailovich was born in the family of an artillery officer, but he became a sailor - he graduated from the Marine Corps in St. Petersburg and devoted his life to the fleet. For courage during the Russo-Japanese War, he was awarded the Order of St. Anne. During the First World War he rose to the rank of captain of the 1st rank, commanded destroyers and battleships. After the seizure of power by the Bolsheviks, he continued to faithfully serve Russia, protecting it from the Germans. He was officially appointed namorsi - chief of the Baltic Sea Forces. But everyone called him simply "the red admiral." 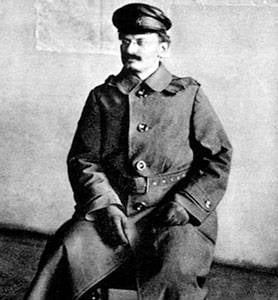 After the conclusion of the “obscene” Brest peace, Shchastny received a secret order from Trotsky and Lenin to prepare the ships of the Baltic Fleet for the explosion. Trotsky even promised to pay the "bomber" a monetary reward, ordering to deposit special amounts in banks for this, knowing that otherwise it would be difficult to force the sailors to destroy their ships for them. The squadron of the Baltic Fleet was then based in ports in what is now Finland, to which the Germans were already approaching. However, Shchastny did not undermine the warships, deciding to save them. It was incredibly difficult to do this; among the “revolutionary” crews, disintegrated by the propaganda of the Bolsheviks and anarchists, there was complete disorder and vacillation. With great difficulty, showing great energy, namorsi managed to pick up a reliable sailors and officers. The icebreakers made their way through the hummocks. Soon all the battleships and cruisers, as well as all the other ships of the Baltic Fleet were already in Kronstadt. Thanks to Shchastny, only they were saved: the Black Sea Fleet, as is known, was scuttled, and all the ships of the Northern and Pacific Fleets were taken by the invaders. And the squadron rescued on the Baltic Sea then faithfully served Russia, defending it during the Great Patriotic War. The battleship Marat (the former Petropavlovsk), for example, defended besieged Leningrad, smashing the Nazis with their powerful weapons.

What was Trotsky so afraid of? Why hurry to destroy the first "red admiral"? Yes, I tried to make him not to be found? We will never know exactly about this. We can only guess that in the portfolio, with which Shchastny came to Moscow, there were such documents, the publication of which was fatally feared by the Bolsheviks.

The Germans were mad

When the Germans entered Revel and did not find Russian ships there, they were furious. The German command immediately sent a secret note of protest to the Kremlin. After all, according to the conditions of the Brest Peace, Russia had to destroy all types of weapons. In addition, modern historians believe that some secret agreements were concluded between the Bolsheviks and the Germans that provided for the transfer of Russian cruisers and battleships to them.

Officially, Lenin and Trotsky have always refuted secret ties with the German General Staff. But now it is no secret to anyone that the “sealed wagon” in which Lenin and his accomplices drove through the whole of Europe embraced by the war in Petrograd was, in fact, paid by the Germans. Documents were found on this account. It is known that once Hitler himself said that the most brilliant operation of the German General Staff was to send Lenin to Russia.

There are serious grounds for believing that there were such secret agreements about the “neutralization” by the Bolsheviks of the Russian military fleet. It is likely that some of the documents were made available to Shchastny.

At a meeting of the Revolutionary Tribunal, at which the savior of the Baltic Fleet was judged, Lev Davydovich said: “You know, comrade judges, that Shchastny, who came to Moscow on our call, left the car not at the passenger station, but outside, in a deaf place, like relies to the conspirator. And he did not say a single word about the documents in his portfolio that were supposed to testify to the secret connection of the Soviet authorities with the German headquarters. ”

Immediately realizing that he had blurted out, Trotsky said that it was a question of "gross falsification." However, let us recall that in the same way the Bolsheviks constantly repeated "slander", refuting the charges connected with the "sealed-up car", which were then irrefutably documented.

Officially, Shchastny was accused of “counter-revolution”, for not preparing the ships for destruction. No one could protect a combat sailor. Trotsky was the only witness at the trial; others were simply not allowed. And Shchastny was sentenced to death. This was the first death sentence officially pronounced by the Bolsheviks, although the death penalty was abolished at that time ..

The Savior of the Baltic Fleet was executed in the courtyard of the Alexander Military School. Moreover, the shooting team consisted of the Chinese, who did not care who to kill. But he commanded the mercenaries Russian by the name of St. Andrew. Subsequently, his shocking story about the execution was published: “I approached him:“ Admiral, I have a Mauser. See, the tool is reliable. Do you want me to shoot you myself? ” He took off the sea white cap, wiped his forehead with a handkerchief. "Not! Your hand may falter, and you only wound me. It is better to let the Chinese shoot. It's dark here, I'll keep my cap on my heart to aim at it. ” The Chinese loaded guns. Come closer. Shchatny pressed his cap to his heart. Only a shadow and a white cap were visible ... A volley burst out. Happily, like a bird, waved his hands, his cap flew off, and he fell heavily to the ground. "

Trotsky ordered to bury the body so that it was not found. In the school building where Shchastny was shot, then Trotsky's office was located, and repairs were being made in it. According to some reports, the Chinese put the body of the murdered admiral into a bag and, without thinking twice, immured right under the floor of this particular office. In any case, the corpse disappeared without a trace.

Petersburg film director Viktor Pravdyuk, who shot a documentary about the tragedy of the “red admiral,” addressed the former defense minister Rodionov (the school building still belongs to the military) several years ago with a request to remove the parquet to test this terrible hypothesis, but he did not allow ...

Why was the all-powerful Trotsky so afraid? Why hurry to destroy the first "red admiral"? We will never know exactly about this. We can only guess that in the portfolio, with which Shchastny came to Moscow, there were such documents, the publication of which was fatally feared by the Bolsheviks.