Volunteers near Moscow during the Great Patriotic War

February 25 2013
56
Frames of pre-war newsreel show us completely happy and carefree faces of Muscovites. Guys dressed with barely perceptible metropolitan foppishness, laughing girls with ice cream in their hands, older people who are always in a hurry somewhere, fit figures of policemen, business people with briefcases in their hands, double-decker trolley buses, trams stuffed to the eyeball - Moscow was just full of life . And none of these millions of city dwellers even suspected that very soon a severe ordeal would fall to their lot, a test that would turn their lives upside down, possibly crippling loved ones. Forever change them ... 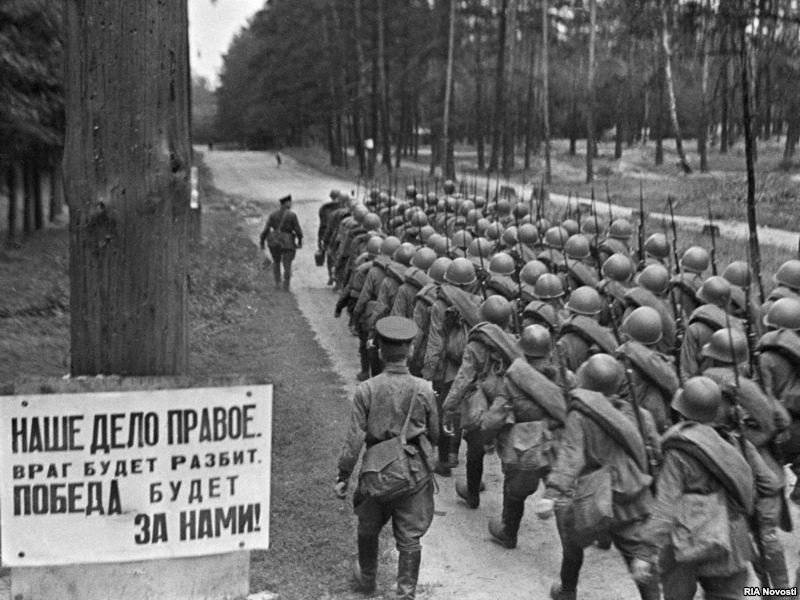 War. Still inaudible, but already foreseeing the roar of exploding shells, explosions of grenades, clang tanks forced thousands of people who were not directly involved in military service to line up in front of the military commissariats in the 41st year. Pupils and students, figures of science and culture, veterans of the civil war - who could not be met in the motley crowd of Moscow volunteers. People brought up on the civil exploits of the pilot Chkalov, polar explorer Papanin, sailors who paved the way from Arkhangelsk to the Bering Strait, now dreamed of their heroic deed, military. They felt that the country needed, that they should contribute to the defense of the Fatherland.

On the night of 2 on July 1941 of the year, the Central Committee of the CPSU (b) invites local party organizations to lead the creation of the national militia, and on the same day the Military Council of the Moscow Military District adopts a resolution on the voluntary mobilization of residents of Moscow and the region into the national militia. According to the plan of the decree, the number of Moscow militia should be 200 thousand people and 70 thousand people supposed to recruit from the area. In total, it was planned to form 25 militia divisions (according to the number of metropolitan administrative districts), and to equip them with people from some areas of the Moscow region.

Divisions were prescribed to be formed by people between the ages of 17 and 55. At the same time, conscripts were released, who had mobilization regulations in their hands, workers of such people's commissariats of the defense industry, machine-tool factories and those industrial enterprises that the district troika (providing mobilization) would consider performing defense orders of extreme importance. Approximately half of the total number of commanders was called up for new divisions from proven personnel of the military district, the rest of the commanders were directly from the militia.

The supply of new militia units with transport, field kitchens, the provision of food transportation and military supplies (within 150 radius kilometers from Moscow) was provided by the resources of enterprises located within this distance from the capital. Weapon, ammunition provided the headquarters of the Moscow Military District.

Before going to the front, volunteers took a short-term course, but under the conditions of military operations, this practically did not help people — according to the recollections of veteran volunteers — very many died in the very first battles. Uniforms for people in volunteer divisions also left much to be desired. As again, direct participants in defense actions near Moscow recall that they were given one rifle per five people and several incendiary bottles. At the same time, tank forces of General Guderian and 2 of a million soldiers of the German Center group were launched against the militias. And there was no one to blame for poor military support - the whole country was working for defense, and the main weapon was, of course, the regular units of the Soviet army.

The fate of the militias took shape in different ways. Someone died, someone was captured, some people went into the partisan detachments, and some, joining the ranks of the army units, managed to reach Berlin.

18 July 1941 of the State Defense Committee adopts a resolution of the Central Committee of the CPSU (b) "On the organization of the struggle in the rear of the German troops." According to this decree, it was planned to deploy preparatory work on the organization of the underground partisan movement. In parallel with this, the formation of special sabotage and fighter groups, whose task included a wide range of tasks. Destruction of the enemy's living forces, intelligence gathering, damage to communications, and important communication facilities (bridges, road mining) —all this fell within the remit of the newly formed special forces.

As part of this decree, a special sabotage brigade is created, better known as military unit number 9903, led by the legendary Arthur Sprogis. The mission of the brigade was to conduct sabotage operations in the rear of the enemy troops, the destruction of the enemy's living forces, intelligence gathering, communication damage, the destruction of communication links (undermining bridges, mining roads).

The basis of the brigade was the Komsomol volunteers in Moscow and the Moscow region, the command personnel were recruited from students of the Frunze Military Academy. During the battle of Moscow in the military unit of the intelligence department of the Western Front, 50 combat groups and units were trained. In September 1941, February 1942, they accomplished about 89 penetration into the enemy’s rear area, destroyed 3500 German soldiers and officers, detected and eliminated 36 traitors, exploded 13 tanks with fuel, 14 tanks.

October 31 1941, Zoe, among other volunteer members of the Komsomol, came to the general gathering place at the “Colosseum” cinema. From here she was transferred to the sabotage school, later becoming a fighter in the reconnaissance and sabotage unit No. 9903. After a short training, the brave Zoya in the group was transferred to the Volokolamsk area, where her group successfully managed to cope with the first task - to mine the road.

17 November 1941 issued the Order of the Supreme Command No. 428, which ordered to “deprive the German army of the opportunity to settle down in villages and towns, drive out the German invaders from all settlements to the cold in the field, smoke them out of all the rooms and warm shelters and make them freeze with the aim of “destroying and burning down all the settlements in the rear of the German troops at a distance 40 — 60 km in depth from the front edge and 20 — 30 km to the right and left of the roads”.

To fulfill this order, 18 November, the commanders of the sabotage groups of part No. 9903, P. S. Provorov (Kosmodemyanskaya included in his group) and B. S. Krainov received a combat mission to burn ten settlements during 5 — 7 days, and among them a village Petrishchevo Moscow region. The sabotage detachments were able to execute the order only on the night of November 27: Boris Krainov, Vasily Klubkov and Zoya Kosmodemyanskaya set fire to three houses in Petrishchev, while the Germans killed 20 horses.

After completing the mission, Krainov managed to get out of the village where the Germans were located, Klubkov and Zoya Kosmodemyanskaya were captured.

About further events it is known to all people who managed to get an education back in the Soviet school (now they hardly tell about Zoya Kosmodemyanskaya at history lessons) - they cruelly tortured her, and then hung her up revealingly.

Today, it is possible to assess the Stalinist order No. 0428 of 17 in November 1941 of the year in different ways, because he essentially called for saboteurs to harm the homes and property of ordinary villagers, Russian people, because of the circumstances that Germans sheltered under the threat of reprisal. From this point of view, it is clear why this order was declassified relatively recently - this is a painful historical topic, debatable, not all people (especially the older generation) are ready to accept such facts.

ORDER OF THE RATE OF THE SUPREME MAIN COMMAND N 0428

The experience of the last month of the war showed that the German army is poorly adapted to war in winter conditions, does not have a warm robe, and, experiencing great difficulties from the onset of frost, huddles in the front line in settlements. The arrogant adversary was about to winter in the warm houses of Moscow and Leningrad, but this was hindered by the actions of our troops. On vast sections of the front, German troops, having met stubborn resistance of our units, were forced to go on the defensive and settled down in settlements along roads for 20-30 km on both sides. German soldiers live, as a rule, in cities, towns, villages, in peasant huts, barns, rigs, bathhouses near the front, and the headquarters of the German units are located in larger towns and cities, hide in basements, using them as shelter from ours aviation and artillery. The Soviet population of these points is usually evicted and thrown out by the German invaders.

To deprive the German army of its ability to settle down in villages and cities, drive German invaders out of all settlements to the cold in the field, smoke them out of all rooms and warm shelters and force them to freeze in the open air - such is the urgent task, the solution of which largely determines the acceleration of defeating the enemy and the disintegration of his army.

The rate of the Supreme Command PRI KAZZA A T:

1. Destroy and burn to the ground all the settlements in the rear of the German troops at a distance of 40 - 60 km in depth from the front edge and 20 - 30 km to the right and left of the roads.

For the destruction of populated areas in the specified radius of action, immediately throw in aircraft, make extensive use of artillery and mortar fire, reconnaissance teams, skiers and guerrilla sabotage groups equipped with incendiary bottles, grenades and blasting agents.

2. In each regiment, create teams of hunters for 20 - 30 people each for the explosion and burning of the settlements in which the enemy troops are located. In the teams of hunters to select the most courageous and strong politically and morally fighters, commanders and political workers, carefully explaining to them the tasks and significance of this event for the defeat of the German army. Outstanding brave men for brave action to destroy the settlements in which the German troops are located, to submit to the government award.

3. With the forced withdrawal of our units in one or another area, take the Soviet population with them and be sure to destroy all settlements without exception so that the enemy cannot use them. In the first place, for this purpose, use the teams of hunters selected in the shelves.

4. The military Soviets of the fronts and individual armies systematically check how tasks are carried out for the destruction of populated areas in the radius specified above from the front line. Bet every 3 of the day a separate summary to inform how many and which localities destroyed over the past days and by what means achieved these results.

However, it must be understood that war is primarily a tragic, terrible phenomenon, not amenable to the logic of peaceful life. And those orders, the actions of the military, which we, representatives of a completely different generation and another time, can perceive as absurd, nightmarish, perhaps even condemn, were perceived by those people of that war as a given, with the understanding that Russian people would not have been different from the Germans persevered

Indeed, it is not known how the battle near Moscow would end if the German invaders were given the opportunity to rest in the overheated village huts and feed off kolkhoz grubs (and in the conditions of the winter war this is an important factor).

Ctrl Enter
Noticed a mistake Highlight text and press. Ctrl + Enter
We are
Military postal service during the Great Patriotic WarArmored train Little-known veterans of the Great Patriotic
56 comments
Information
Dear reader, to leave comments on the publication, you must to register.