Kosovo: the sixth year of "independence" 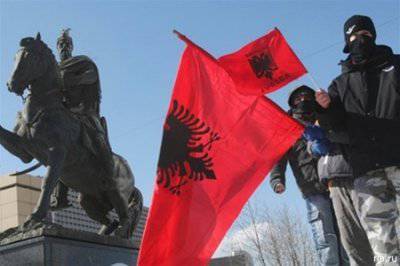 A few days ago, on February 17, a small anniversary was celebrated in Kosovo: the fifth anniversary of “independence”. In honor of this event, the regional legislature arranged a solemn meeting, followed by a concert. The head of Kosovo, Atifethe Yahyaga saidthat the republic is “a state of great opportunities”, and the independence of the region is a “political reality”. Yahyaga recalled that Kosovo is seeking to become "part of a united Europe." However, in the official report of the Belgrade Chancellery on Kosovo and Metohija, the answer was: “Serbia will never recognize the so-called independent Kosovo”.


But Kosovo recognized Egypt - the new “democratic” growth on the world map.

Recognition of Kosovo was announced on the “jubilee” Sunday in Pristina after the meeting of the Kosovo Prime Minister Hashim Thaci and the Assistant to the President of Egypt Pakinam Hasan Khalil Sharkavi. Last said: “Egypt supports Kosovo’s accession to international organizations, such as the World Bank and the European Bank for Reconstruction and Development.”

Now Kosovo’s independence is recognized by the 101 state, including UN 99 members from 193 (51%), EU member 22 from 27, and 24 from NATO 28. Almost three years ago, in 2010, the International Court of Justice in The Hague ruled that the declaration of independence for Kosovo does not contradict international norms.

There are, of course, such "harmful" countries that Kosovo does not want to admit. Among these world renegades there are already mentioned Serbia, then Russia, China, India, Brazil, South Africa, Argentina, Mexico, Spain, Greece, Ukraine, Belarus. Most of the countries of Latin America, Africa and Southeast Asia also do not want to recognize the "independent" state.

The main guarantor of democracy, freedom and human rights on the planet - the White House - congratulated Kosovo on its anniversary. "Voice of America" reports this in solemn tones:

“... John Kerry congratulated the Republic of Kosovo on the fifth anniversary of independence, which is celebrated on February 17, and promised that the United States will continue to support the independence of this country.

“The United States continues to support the independent, sovereign and multi-ethnic Republic of Kosovo,” Kerry said in a statement. “I congratulate the leaders of Kosovo and welcome their efforts to create strong democratic institutions, expand economic opportunities, ensure the rule of law and deepen Kosovo’s integration into the European community.”

Thus, Mr. Kerry has learned the lessons of Hillary Clinton well and continues, in accordance with the long-standing American tradition, to pursue a genuinely democratic policy. Yes, and how not to conduct it, if Kosovo Albanians have already gathered in NATO. Well, why not? The European Union without NATO is like a porridge without salt.

Atifethe Yahyaga and says: Kosovo region has a clear goal - accession to the European Union and NATO. Such great aspirations must mean that the people of Kosovo, in the words of Ahyagi, "began a new chapter in stories, Head of Peace, Mutual Understanding, Cooperation and Mutual Respect. ”

Today edge inhabited on 90% Albanians. Most of the local Serbs live in the north with the national center in Kosovska Mitrovica, another part - in the enclaves, surrounded by settlements of local Albanians.

Serbian Ambassador to Russia Slavenko Terzic saysthat in Kosovo and Metohija ethnic Albanians destroy the ethnic Serbs and the cultural heritage of Christianity. In the very heart of Europe, Islamists thus implement the policy of the genocide of Christians and their discrimination based on nationality. All this can be called a complete failure of European values ​​and even European civilization.

Ethnic Albanians drive the Serbs from their homes. In the eyes of Europe, genocide and apartheid are taking place, the ambassador said. Radical political Islam penetrates Europe. He operates here everywhere: in Albania, Kosovo, Bosnia and Herzegovina. But Europe does not want to recognize the growing danger.

Serbia, reminds Yevgeny Novikov ("Expert"), like all Eastern European countries, seeks to join the EU. But one of the conditions for the launch of negotiations on EU membership (only for launching!) Is the normalization of Serbia’s relations with Kosovo. In fact, the EU is seeking from Serbia recognition of the sovereignty of the region.

There is nowhere to go any further: the European Parliament's foreign policy committee adopted a draft resolution on Serbia and Kosovo. It will be tabled in March 2013. The draft resolution says: the EU excludes the division of Kosovo into two parts - Albanian and Serbian.

Belgrade’s policy on Kosovo is weak. Serbian analysts point out that the Belgrade authorities have not developed alternatives to EU membership. “EU or death,” Slobodan Antonych, a Serbian political analyst, describes this policy.

Today Serbia can do little for Serbs living in Kosovo. The Serbian Ambassador to the Russian Federation says that his country only informs the UN and the EU about everything that is happening in the province. Belgrade fears NATO sanctions:

“All the Balkans are a political protectorate of NATO. In the 90s, we had a “hermetic embargo”, later there were bombings, we were destroyed militarily and economically. We were given ultimatums. The government is afraid of causing a new blow to Serbia, fearing harsh repression. But the people have the mood to "respond strongly." But it must be remembered that NATO is always around us: our neighbors are included in this block. Therefore, it is necessary to conduct a cautious policy. "

As for Kosovo, there, on the contrary, military structures are being strengthened. As stated recently by the Kosovo Security Minister, field commander Agim Ceku, from June 15 his troops will be transformed into the “Kosovo army”. According to him, today his divisions are fully prepared for the implementation of new goals and objectives.

The EU continues to put pressure on Belgrade. According to a report from Brussels ITAR-TASSOn February 19, the meeting of the President of the European Council Herman Van Rompuy with the Prime Minister of the self-proclaimed Republic of Kosovo Hashim Thaci took place.

After a conversation with Thaci, Van Rompuy told reporters that Serbia and Kosovo’s accession to the EU depended on the concrete results of the dialogue between Belgrade and Pristina: “Specific results are crucial.” He noted that “Kosovo has a European perspective,” but Pristina must first fulfill the short-term goals set by the European Commission. First of all it concerns the observance of the rights of ethnic minorities, the fight against corruption and organized crime.

In Brussels, Thaci was extremely active: he met not only with Rompuy one day, but also with the European Commission President Jose Manuel Barroso, from whom he went to a bilateral meeting with Serbian Prime Minister Ivica Dacic with the mediation of EU High Representative for Foreign Affairs and Security Policy Katherine Ashton

Analyst Olga Churakova ("Century") rightly believes that the West cuts off Belgrade all the way back. The exclusion by the European Union of the possibility of dividing Kosovo is precisely what it means. After all, the idea of ​​“cutting off” the northern part of the Serbs inhabited by the Serbs and leaving it in Serbia in this way is considered rational by many. Such a geopolitical combination would relieve the existing inter-ethnic tensions in Kosovo and relieve all the anxieties of the Serbian population. Kosovo Albanians would get rid of the Serb communities. But the trouble is that the true owners and managers of Pristina meet in Washington and Brussels - and there the ideas of the division of the region are extremely unpopular.

What will Belgrade do in this situation? What about Belgrade?

The desire for the European Union and the desire to set as soon as possible the date for the commencement of negotiations on joining the “friendly family of European nations,” writes O. Churakova, and dictates Belgrade a line of conduct. And it does not matter which party and person comes to power. Both the democrats Boris Tadic, the socialists Ivica Dacic, and the progressists Tomislav Nikolic want one thing - the same things that society wants. Eurointegration!

“It is regrettable that public opinion in Serbia forms foreign capital,” says Slobodan Antonych. “And the fact that we are so corrupt that we don’t even notice it.”

He hints at the fact that the owners of the main media in Serbia are large Western media companies, and the most influential NGOs are financed from foreign funds.

In the meantime, there is an information hype in Kosovo, not to mention the drug trade, crimes on the ground of illegal transplantation of human organs are flourishing. So much so that the other day Russian law enforcement agencies opened a criminal case on the fact of relevant criminal activity in Kosovo. “The Russian Federation attaches great importance to a full and comprehensive investigation into the crimes committed in Kosovo for the unlawful seizure and transplantation of donor organs. Russian law enforcement agencies have opened an appropriate criminal case, work is underway, ”- it is said in a message on the website of the Russian Foreign Ministry.

Moreover, top officials of Kosovo, including Prime Minister Hashim Thaci, are suspected of this very trade in human organs. In another case of “black transplantology”, the former Minister of Health of Kosovo, Ilir Retsay, appears as one of the main defendants.

Back in February, 2011, the Swiss senator and former prosecutor Dick Marty, presented to PACE a report on “black transplantology” in the province. He said that Hashim Tachi was one of the bosses of the largest Kosovo criminal group that participated in mass abductions and killings of people, underground trafficking in human organs, and at the same time controlling drug trafficking.

And nothing has changed. For Mr. Thaci, the appearance of that report had no effect. International law enforcement agencies are in no hurry to prove his involvement in these terrible crimes.

Thus, the one who is called the boss of the “largest Kosovo criminal group”, and the prime minister in combination, successfully hung out in Egypt, having obtained from the Muslim Brotherhood recognition of the region as an independent state. The same Thaci recently met with European Council President Van Rompuy, European Commission President Jose Manuel Barroso, and then, hand in hand with Baroness Ashton, went to a bilateral meeting with Serbian Prime Minister Ivica Dacic. This whole crime series must be very much enjoyed by Europe and the USA, which adores playing the roles of geopolitical managers.

Observed Oleg Chuvakin
- especially for topwar.ru
Ctrl Enter
Noticed oshЫbku Highlight text and press. Ctrl + Enter
We are
Ban flights to Egypt. What happened to the plane and what awaits the Russian tourist business?Serbia and Kosovo: the rush with implementation
Military Reviewin Yandex News
Military Reviewin Google News
54 comments
Information
Dear reader, to leave comments on the publication, you must sign in.