New combat vehicle "Terminator" will be presented in September 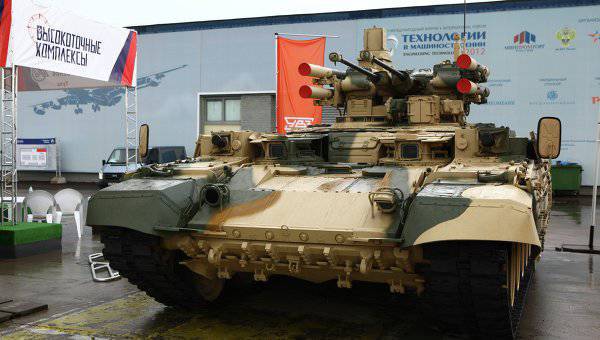 In September 2013, the Uralvagonzavod will present a support combat vehicle at the arms salon in Nizhny Tagil tanks "Terminator" in the new version, created on the basis of the modernized T-72 tank.

“We are developing a new concept for the Terminator for decommissioned and upgraded T-72 tanks. We will present the new version in September at the exhibition in Nizhny Tagil, ”said Oleg Sienko, general director of the research and production corporation Uralvagonzavod.

According to him, the new "Terminator" is close to the existing look, but has a different concept. With almost the same weapons, he will have a smaller number of crew members, ITAR-TASS.

As explained by the head of UVZ, this concept was developed at the request of "our potential buyers, who have large fleets of T-72 vehicles and are limited in funds." “Not every country can afford the luxury of a five-man crew required for a basic Terminator. Therefore, in response to the wishes of such potential customers, we have developed a new concept, which will be demonstrated at the “Prospector” training ground from 25 to 28 in September, ”said Sienko.

“We are completers for this program, which is being successfully implemented. We are discussing the continuation of work in this direction, since the feedback from the Indian side is the most positive, ”said Sienko.

According to him, "the tanks produced are already in the hundreds." “For the licensed production, quite serious funds were spent by the Indian side, which is interested in the contract to be end-to-end, moving from the large-unit assembly to full localization of production and the subsequent modernization of previously jointly manufactured machines. It means that process has to be nonstop, - Sienko told. “UVZ together with Rosoboronexport decided to demonstrate a full-scale model of a Russian T-2013С tank on IDEX-90.”

“We have customers in this region, and this time we brought full-scale samples. At past shows, our products were shown in pictures, but this does not give any effect. It’s better to see once than to hear, ”the head of the UVZ noted.

Recall, BMPT "Terminator" is designed to combat the tanks and other armored vehicles of the enemy, as well as to repel attacks of helicopters and low-flying aircraft. "Terminator" is equipped with launchers of guided missiles with a firing range of up to 5 km.

In addition, the BMPT mounted guns to combat easily armored targets and manpower of the enemy. The machine is also armed with two stabilized AG-17D remote-controlled automatic grenade launchers.

In the ammunition "Terminator" used ammunition, unified for all models of combat vehicles of Russian production.

As the newspaper VIEW, reported at the end of August 2012, Dmitry Rogozin in Nizhny Tagil at the exhibition “Defense and Protection - 2012” confessed his love for the Russian car with an American name.

“Terminator” is my first love. This is a great car with amazing power, indispensable in urban areas and makes a big impression at exhibitions. In the West there are none. Therefore, I decided that I will personally accompany potential foreign buyers who are interested in the Terminator, - his words are cited on the website of the Uralvagonzavod enterprise. Also in a television interview for Russia 24, Rogozin noted that Terminator has a “huge export potential.”

Meanwhile, it later became known that the Defense Committee of the State Duma intends to seek to rename the newest Russian tank support vehicle Terminator.