Star Wars on the land of Baikonur 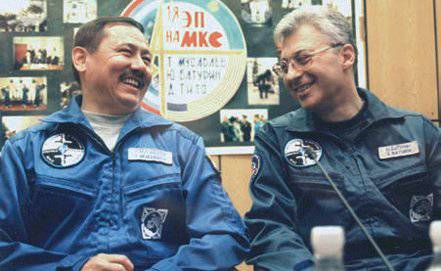 The leaders of Russia and Kazakhstan agreed on the further joint mutually beneficial use of the Baikonur cosmodrome - this statement was made following the visit of Kazakh President Nursultan Nazarbayev to Moscow. The parameters of the agreements reached are not made public. But the conflicts and disagreements around the cosmodrome that preceded these agreements “flowed” into the press very actively.


One can say that the disagreements of Moscow and Astana have acquired a "cosmic" scale. On the eve of Nazarbayev’s visit to Moscow, Kazakhstan announced its intention to revise the current agreement, reduce the number of launches of the Proton rocket and raised the issue of a phased transfer of Baikonur to Astana. In response, Russia threatened to end cooperation on all joint projects in the field of space. Foreign ministries of the two countries exchanged notes. The future of the cosmodrome was discussed by the ministers of foreign affairs of Russia and Kazakhstan Sergey Lavrov and Yerlan Idrisov and the interstate commission at the level of deputy prime ministers of the two countries Igor Shuvalov and Kairat Kelimbetov.

It is not the first time that Kazakhstan and Russia are sorting out relations on using the Baikonur cosmodrome. The peculiarity of the current situation is that the dirt was taken from the hut. The note of the Russian Foreign Ministry was made public, in which Smolensk Square demanded to clarify the statements of Talgat Musabayev, head of Kazkosmos, that Kazakhstan imposes restrictions on launching Proton-M launch vehicles: they should now not be 14, but 12 per year . The reason is allegedly pollution. In this regard, Kazakhstan decided to unilaterally revise the agreement on the lease of the Baikonur cosmodrome by Russia.

Soot from the hut

“The agreement on the lease of Baikonur was made in 1994 year and worked its own. President Nursultan Nazarbayev set the task to develop a new comprehensive agreement on the Baikonur complex, ”Talgat Musabayev said in December. True, he later disowned his words, and the Kazakh Foreign Ministry advised journalists “not to create a rush around the situation.” Anyway, the Foreign Ministries of the two countries managed to exchange notes. Russia threatened Kazakhstan to end cooperation in space exploration on all joint projects.

The Kazakh Foreign Ministry reported that it did not receive any notes. Yerlan Idrisov, who urgently flew to Moscow, said that Astana does not intend to refuse to cooperate with Russia in the space industry. Guilty of everything, as usual, were the journalists who, they say, incorrectly interpreted the words of the head of Kazcosmos.

Roskosmos, in turn, explained that limiting the number of launches of spacecraft with Proton-M missiles at 2013 did not allow fulfillment of contractual obligations under five commercial programs, which is fraught with termination of international contracts and returning 500 million dollars to customers. If the agreement fails, Roskosmos will demand compensation from the Kazakh side.

However, Sergey Lavrov suggested not to attach importance to “ordinary musical correspondence”. “Questions arise, they need to be addressed. And earlier there were questions about the number of launches of Proton launch vehicles - this is due to Kazakhstan’s concern over the environmental consequences of these processes. The Russian side is doing everything necessary to improve the environmental aspects. The Proton missiles have already been upgraded, and we have not additionally agreed on the number of launches for the first year, ”said Lavrov.

With the collapse of the USSR, hard times came for Baikonur. The spaceport was on the territory of sovereign Kazakhstan. The country's leadership declared Baikonur its national treasure and tried to “attach” it with the maximum benefit. Russia, as the successor of the USSR, made obviously impracticable requirements on the conditions of operation of the cosmodrome. The negotiated rental amount reached seven billion dollars a year. In addition, Kazakh politicians offered Russia to pay for the damage caused by rocket launches, according to the so-called “environmental contribution”. Moscow, for its part, was ready to pay for the rent of Baikonur about 80 million dollars a year.

Finally, in 1994, Russia and Kazakhstan managed to agree. An agreement was signed on the basic principles and conditions for the use of the Baikonur cosmodrome for a period of 20 years. Russia undertook to pay 115 millions of dollars annually for rent, half of this amount was in cash, and the rest was read out by return services to Russia, as well as writing off Kazakhstan’s debts. “Later more than once disputes arose between Russia and Kazakhstan on the exploitation of Baikonur,” said Azhdar Kurtov, leading expert at the Russian Institute for Strategic Studies. There was a period when the Kazakh authorities prohibited, due to unsuccessful launches, launches of Proton class missiles. For the Dnepr launch vehicle crash in 2006, Russia paid 1,1 a million dollars, for a Proton that fell in 2007, 8 million.

According to Kurtov, the current aggravation of “cosmic” relations between the two neighboring countries is connected with the firm desire of Kazakhstan to pave its own path to a near-earth orbit. A joint venture was created that developed the Baiterek (Topolek) national project: launchers for Angara Russian missiles. However, this project did not meet Russian interests. In Moscow, it was decided that Angara will be launched not from Baikonur, but from the new Vostochny cosmodrome, which is being built in the Amur Region.

According to Azhdar Kurtov, the decision of Russia is natural, since “it is impossible to develop supernovae technologies that are inevitably related to the country's defense capability, and rely on the leadership of Kazakhstan: will it allow launches or not”. Then Astana and tightened the rhetoric and demanded to revise the terms of the lease upward. The parties concluded a new contract before 2050 of the year, according to which Russia pays 115 million dollars a year to Kazakhstan as rent for the use of Baikonur, invests 100 million into the operation and modernization of its facilities and 170 million each year to maintain and develop the spaceport infrastructure and cities.

В stories with “Angara” Russia is also not without sin, says Alexander Sobyanin, head of the Association for Border Cooperation. In a conversation with Echo, he recalled that in December 2004 of the year, an agreement was signed on the creation of the Baiterek rocket and space complex to launch Angara launch vehicles. But the deadlines for the execution of the work were violated by the Russian side, and the cost of the project was increased seven times and brought to almost two billion dollars. Initially, it was planned that Angara would fly up in 2008, but later Moscow postponed the deadlines to 2010 — 2011 years, but it would not fly up in 2013 either. This project is simply unprofitable for Russia, and Angara, it seems, no one is going to do now.

In Astana, they understood this and asked to keep the “Baiterek” program and reorient in it to Zenith type rockets. “Some representatives of the Russian side perceived this approach of the Kazakh partners as a surrender and are trying to put even more pressure on them,” believes Sobyanin. - But after all, Astana was the first to compromise. It is necessary to adequately evaluate it and move on together. "

Nevertheless, the leadership of the two countries believe that the existing contradictions are not a reason to revise a long-term agreement on cooperation in the space sphere, which must be strictly observed.

In Kazakhstan, many are convinced that the increased tension in relations between Astana and Moscow in the space sphere is unprofitable for any of the parties. “For Russia, this is not only a space project, but also a certain political component of its presence in Kazakhstan,” said Dosym Satpayev, director of the Risk Assessment Group, in an interview with Echo. “Kazakhstan, in turn, has every right to proceed from its national interests and be more demanding.”

Russia's statement about the construction of its own Vostochny cosmodrome radically changes the role of Baikonur in the implementation of its space programs. All federal orders for launches of defense and manned satellites that are currently being carried out from Baikonur are likely to be transferred to Vostochny. In any case, this is assumed in Astana, where they see Russia's inevitable departure from Baikonur. In Moscow, they don’t hide their plans to transfer to Vostochny at least military launches before 2020.

Kazakhstan, assessing itself as a space power, began to prepare for the independent management of Baikonur. Back in 2008, Prime Minister Karim Massimov instructed Kazkosmos to prepare a plan for the development of the cosmodrome after 2016, but without the active participation of Russia. However, experts say that the spaceport is designed to operate exactly the Russian space technology. “Russia cannot be replaced at Baikonur. This could be done only if Kazakhstan would have become a highly developed power, created its own space exploration school. For now, he only keeps abreast of the financial flows, ”Ajdar Kurtov believes.

Talgat Musabayev believes that with Russia or without Russia, but Baikonur should not become useless: "Kazakhstan itself begins its work in this direction and invests certain funds for this." According to him, 90 billion tenge, or about 18 billion rubles, is allocated from the country's budget for the development of the space industry. “I don’t know how cooperation with other states will develop, what forms of maintenance of this cosmodrome will be in the future, maybe it will be rent. But, according to our forecasts, Baikonur should live and develop, ”said Musabayev. Astana is actively negotiating with many countries on this matter. Already signed agreements with France, Israel and Ukraine.

According to Alexander Sobyanin, Kazakhstan declares itself an ally of Russia, while he himself perceives the situation as a forced dependence on Moscow, which must be overcome so carefully that Russia remains at Baikonur. “Astana must understand that it is impossible to replace the Russian space program, neither American, nor Chinese, nor any other. Whether the Kazakhs like it or not, nobody will replace the Russians at the cosmodrome, ”says Sobyanin.

Azhdar Kurtov, for his part, is convinced that Russia, even with the commissioning of the Vostochny cosmodrome, will not leave Baikonur completely. Therefore, the compromise reached by the presidents of the two countries was inevitable. Azhdar Kurtov is sure: "Russia does not have much success in the post-Soviet space, so the Kremlin will not want to lose Kazakhstan and, for this, will most likely make some concessions."

Baikonur: a story with geography

The decision to build a landfill for astronautics and testing of combat intercontinental ballistic missiles in the USSR was adopted in 1953. When choosing a place, two factors were mainly taken into account: proximity to the equator and safety when falling parts of aircraft. The Kazakh steppe became the most suitable. The construction site began to be built in the 1955 year near the Tyuratam junction near Syrdarya and the Moscow-Tashkent railway line. The Kazakh aul Baikonur, which gave the name to the cosmodrome, was in fact about 300 kilometers away: they wanted to misinform the potential enemy with the name.

The spaceport was built in record time: the 15 of May 1957 was already here, the first launch of the P-7 rocket created by Korolev was carried out here. 12 April 1961 from Baikonur was launched into space on the Vostok ship by the first Earthman, Yuri Gagarin. The spaceport extends 85 kilometers from north to south and 125 kilometers from west to east. It also includes fields of falling waste media stages: 22 plot of the total area 4,8 million hectares. The launch site contains launch pads for all main types of Russian launch vehicles: Proton, Zenit, Energy, Lightning, Cyclone, Soyuz, Vostok. The main objects are 52 launch complexes, 34 technical positions, three computing centers, two mechanical assembly plants, two airfields, and a CHP plant. Approximately 30 percent of military launches are carried out from Baikonur.

Ctrl Enter
Noticed oshЫbku Highlight text and press. Ctrl + Enter
We are
The first in the world: ten facts of the primacy of Baikonur"Proton-M" waiting for serious competition with the American rocket "Falcon 9"
Military Reviewin Yandex News
Military Reviewin Google News
125 comments
Information
Dear reader, to leave comments on the publication, you must sign in.