February 14 2013
19
Arkady G. Georgiyevich Shipunov was born on November 7 of 1927 in the city of Livny in the territory of the Oryol province. This is an outstanding Soviet gunsmith designer, the creator of the automatic small arms of land, air and sea-based. From 1962 to 2006, Arkady Shipunov headed the Tula Instrument Engineering Design Bureau, he is a doctor of technical sciences and an academician of the Russian Academy of Sciences. Shipunov - a famous scientist who made a significant contribution to the development of Russian engineering and engineering, is the author of the fundamental works in the field of machine strength, dynamics, the theory of design and engineering, automatic control and system analysis. Together with the designer V.P. Gryazev he participated in the creation of a family of cannon armament of the General Staff and a pistol of the General Staff-18.


Last year, the famous gunsmith designer celebrated his 85-th birthday. Of these 85 years, more than 44 years, Shipunov was the head of the Instrument Engineering Design Bureau, famous in Russia, in the city of Tula. Today he is the supervisor of this enterprise. For employees of the enterprise, KBP and Arkady Georgievich Shipunov have long been merged into one whole, and they were born in the same year - 1927. For those who do not know, Instrument Design Bureau OJSC is the leading design organization of the Russian defense complex, which specializes in the creation of high-precision complexes weapons. Over the long years of its existence, the enterprise team created and launched into mass production more than 140 samples of various military equipment and weapons.

Even people quite distant from the defense industry have heard about the development of this design bureau. After all, they include the Metis, Kornet, and Konkurs anti-tank missile systems, guided weapons systems for the BMP-3 and BMD-4 lightly armored vehicles, tanks, anti-aircraft missile and cannon systems "Tunguska", "Shell-C1", "Chestnut". These and many other KBP developments were created under the strict guidance of A. G. Shipunov, as well as on the basis of his design decisions and ideas. 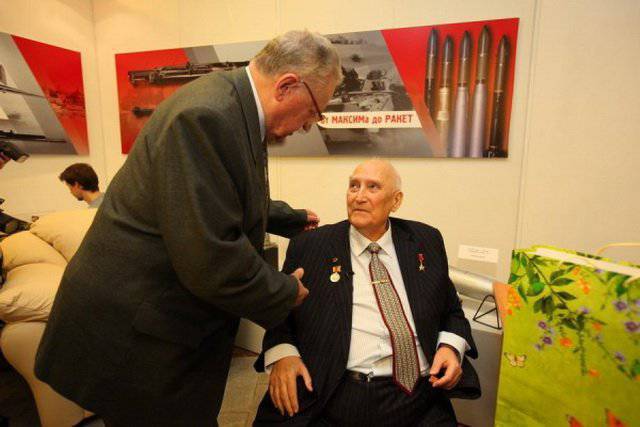 On account of one of the main luminaries of the Russian "defense" from the city of Tula - 772 inventions and 548 scientific papers. At the same time, it is difficult to list all the honorary titles and awards that Arkady Shipunov was awarded during the years of his scientific and organizational work. Much more interesting is the fact that nowadays even some schoolchildren will be able to tell about the main characteristics of the “Kornet” or “Pantsir-С1”, but the person who was at the origin of this weapon for many is still a mystery. Even in Tula itself, not all members of the younger generation have heard of this designer, let alone other cities in the country.

In his native town Shipunova, they learned about their famous countryman just 5 years ago. This was during the celebration of Arkady Shipunov on the occasion of the 50 anniversary of his work in the KBP, said Deputy Mayor of Livny, Vitaly Sereda. According to him, he himself only recently found out that the gun GSH-23, which he had the opportunity to serve while serving in the army 36 years ago, was developed by A.G. Shipunov. And this is not surprising if we take into account the fact that many of the great leaders of the Russian defense industry are still “classified”. Many of them became known only after his death. In this regard, Shipunov was much more fortunate, he was able to tell journalists about his life and work.

The life of the designer was quite rich and interesting. He was born in the days when the country was still the NEP. Shipunov remembered 1933-1934’s terrible famine and the joy of his loved ones from the subsequent generous harvest. He remembered the formation of the Soviet army. When he lived in Orel, he was in the same class with the daughters of General Remezov, commander of the Oryol Military District. He managed to see the war in all its phases, in all its horror. 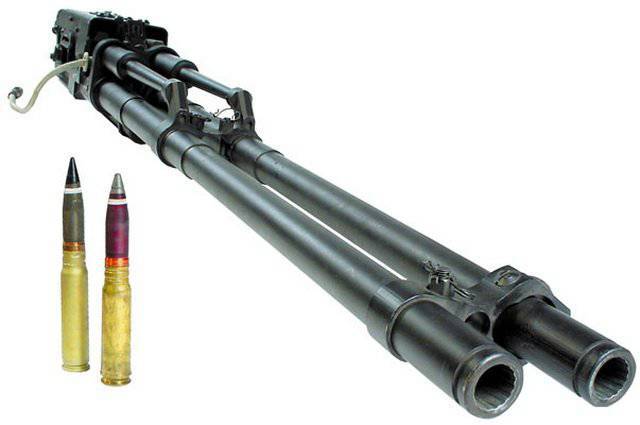 Aviation gun GSH-2-30
As a boy, he remembered how the Red Army drape in 1941 year. 3 October 1941, the German troops came close to Orel, and Shipunovs and their neighbors rushed out of the city, retreating along with the refugees along the roadsides. At this time, over the road, German planes appeared that bombarded people with machine guns and threw bombs at them. Refugees hid in funnels, ditches, bushes, and in Arkady Shipunov, the thought stuck in my head: “You should have shot!”. He forever remembered the face of the fascist pilot, who at low-level flight shot defenseless refugees. This memory and the phrase “to shoot” would in many ways become for him the first and very strong message in his future profession.

The second phase of the war was directly related to the decisive battles. At this time, the left flank of the unfolding Battle of Stalingrad captured Voronezh, which was then the designer. When Voronezh was liberated by Soviet troops, 96% of the city lay in ruins. There were practically no inhabitants in it. At that time, the entire 1 school worked in the city, and there was only one fully equipped class in it, the 9, and the future designer studied there. After the war, he was awaited by the restoration of the country, the card system and its cancellation, the great construction projects. It was a time in which there was at the same time a lot of grief and a lot of joy.

In 1950, Arkady Shipunov graduated with honors from the engineering faculty of the Tula Mechanical Institute, where he studied the specialty “Rifle and artillery systems and installations”. In the same year, a young engineer began his career in the Scientific Research Institute-61, which would later become the Central Research Institute "Tochmash" in the Podolsk city of Moscow. Here he goes from the usual engineer to the deputy chief engineer of the NII-61. In 1955, he successfully defended his thesis for the degree of candidate of technical sciences. 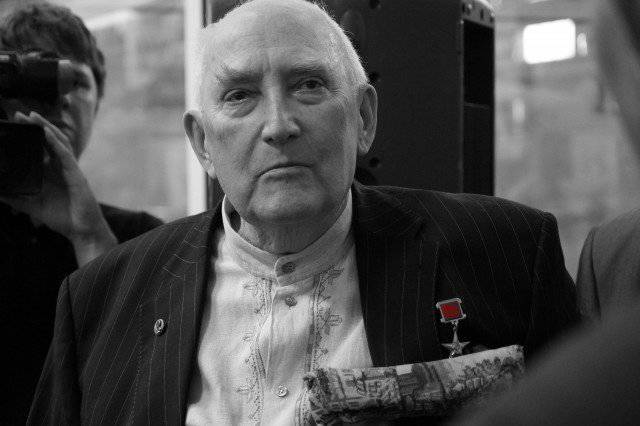 In 1962, Arkady Shipunova was appointed General Designer of TsKB-14 in the city of Tula, which was later transformed into the state-owned unitary enterprise KBP (Instrument Design Bureau). In the 1966 year, V. P. Gryazev was transferred to the same enterprise to the position of deputy head. In the future, an unprecedentedly high scientific and technical level of armament, which was created by Shipunov in collaboration with V. P. Gryazev, predetermined the corresponding military and economic effect from the operation of the enterprise. It was in KBP that the necessary scientific and technical prerequisites were created, and on their basis a unified system of Russian small-caliber artillery weapons was implemented for all types of aircraft.

In 1965, the 23-mm GS-23 aircraft gun (designed by Gryazev-Shipunov) was adopted by the Soviet army. For the first time, a basic double-barreled scheme was developed, which made it possible to bring the rate of fire to 3200 rds / min, while ensuring the safety of the barrels even with intensive firing. The GS-23 was equipped with almost all Soviet and then Russian aircraft: fighters, bombers, attack aircraft. The effectiveness of the developed double-barreled solutions was manifested in the development of 30-mm rapid-fire guns GSH-30K for the Mi-24P and GSH-30 helicopters for Su-25 and Su-39 attack aircraft.

In 1973, Arkady Shipunov defended his doctoral dissertation, in 1975, he became a professor. In 1979, the “closed” decree of the Presidium of the Supreme Soviet of the USSR, A. G. Shipunov, was awarded the honorary title of Hero of Socialist Labor with the award of the Sickle and Hammer gold medal and the Order of Lenin. 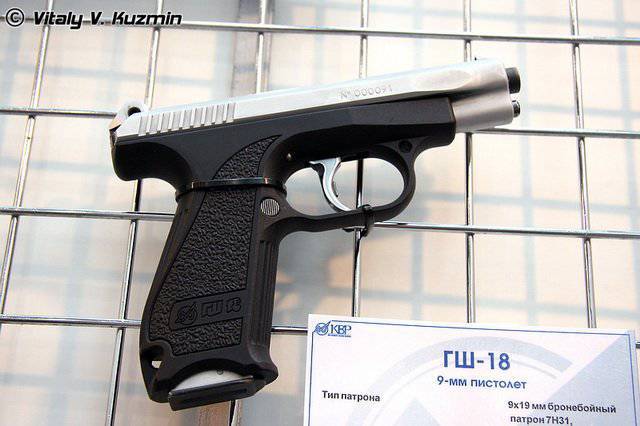 9-mm pistol GSH-18
In 1987, Shipunov was appointed general director and general designer of NPO Tochnost, located in the city of Tula. From 1992, he became the chief and general designer of the State Unitary Enterprise "Instrument Design Bureau". Shipunov became the founder of the modern scientific and design school for designing high-precision guided and small-arms weapons. Under his direct leadership, a number of very successful models of small arms, artillery and rocket weapons were created. Together with V.P. Mud, he created a whole family of weapons GSH: including cannons GSH-23, 2A42 (used on the BMP and helicopters), GSH-6-23, GSH-301, GSH-302, GSH-6-30, and 18-charging gun GSH-18.

At various times in the KBP were created those types of weapons that took time and circumstances. Over the years of work of Arkady Shipunov in Tula KB, more than 70 of various systems have been developed, some of which were significantly superior and are now superior to foreign analogues. The results of Shipunov's research and developments are now widely used in the creation of civilian products: metalworking and sewing equipment, medical laser devices, and biotechnological industries.

Products created in Tula KBP are in demand both in the Russian market and in the international arena. Today, the export of its products reaches almost 1 billion dollars a year. Over time, this amount may grow even more. Currently, Arkady Shipunov does not doubt the professionalism of the team of his native enterprise, he believes that the KBP has a great and bright future. The company has always understood that the products of the defense industry should not only be comparable with foreign counterparts, but also surpass them. And in those industries that the KBP is engaged in today, this is true. According to Shipunova, this is due to the fact that the enterprise’s collective acts according to conscience and conviction, placing service to the Fatherland above all.

Ctrl Enter
Noticed a mistake Highlight text and press. Ctrl + Enter
We are
Gunmaker master - Vasily Petrovich GryazevAnti-terror weapons
19 comments
Information
Dear reader, to leave comments on the publication, you must to register.