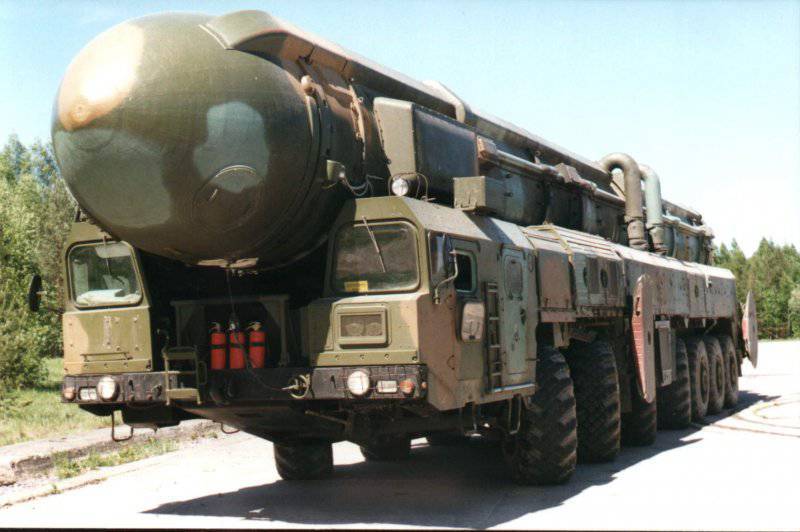 Work on the creation of a new missile system began in the mid 1980-s. By order of the Military-Industrial Commission from 09.09.1989, it was prescribed to create two missile complexes (mobile and stationary), as well as a universal three-stage solid-fuel intercontinental ballistic missile. This development work was given the name “Universal”, and the complex under development was given the designation PT-2ПМ2. The complex was jointly developed by the Moscow Institute of Heat Engineering and the Yuzhnoye Design Bureau (Ukraine, Dnepropetrovsk).

The rocket was supposed to be unified for both complexes, however, in the initial design, a difference was assumed in the breeding system of the combat unit. For a silo-based missile, the combat stage had to be equipped with a liquid jet engine using the promising monofuel PRONIT. For the mobile complex, MIT developed a solid-fuel propulsion system. There were also differences in the transport and launch container (TPK). In the mobile version, the TPK was to be made of fiberglass, in the stationary version - of metal, with a number of ground equipment systems mounted on it. Therefore, the rocket for the mobile complex was assigned the index 15Ж55, for the stationary - 15Ж65.

In March, 1992 was decided to develop the Topol-M complex at the Universal base (Yuzhnoye Design Bureau ceased to participate in this complex in April). 27 February 1993. The President of the Russian Federation signed a corresponding decree (this date is considered the beginning of work on Topol-M). By this decree, MIT was appointed by the parent company for the development of Topol-M, and the financing of work was guaranteed.

In fact, it was necessary to develop a universal missile by type of base. At the same time, both in the mine and in the mobile versions, the rocket had to have high combat capabilities, high accuracy of fire, and be able to carry long combat duty in various degrees of readiness. In addition, it had to have a high resistance to the effects of damaging factors during the flight and overcome the missile defense of a potential enemy. 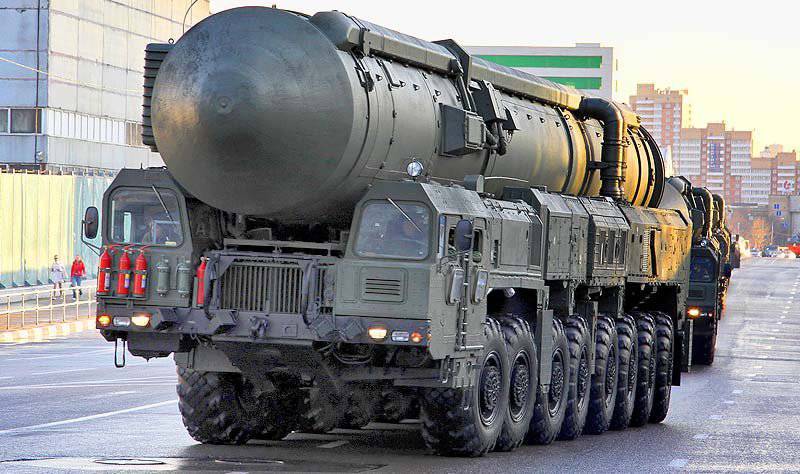 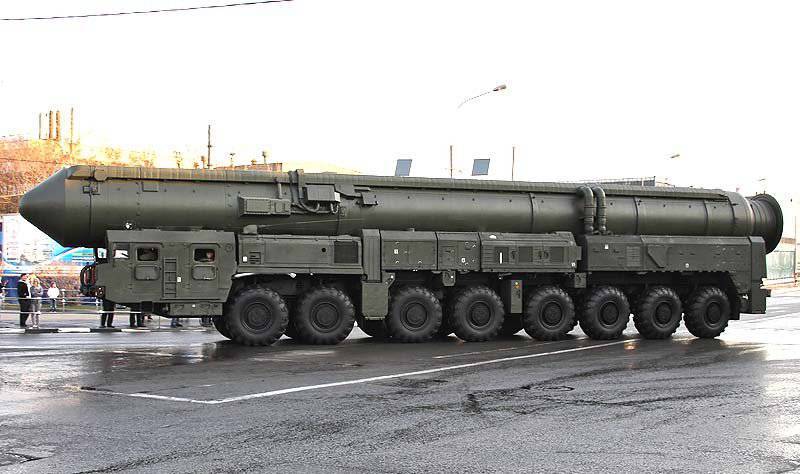 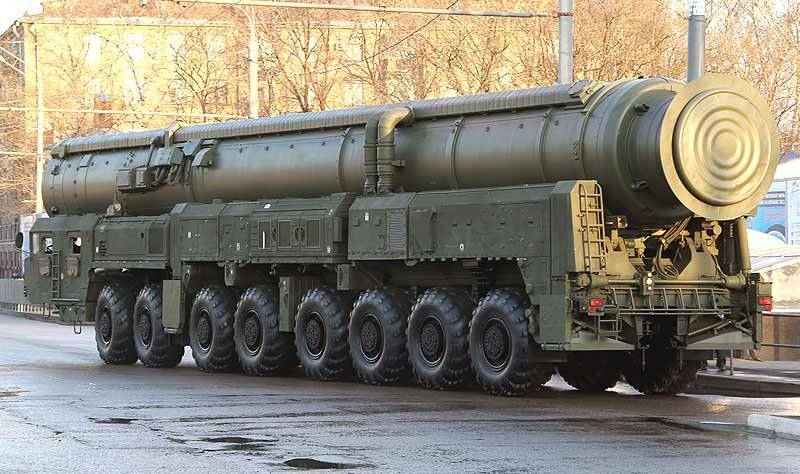 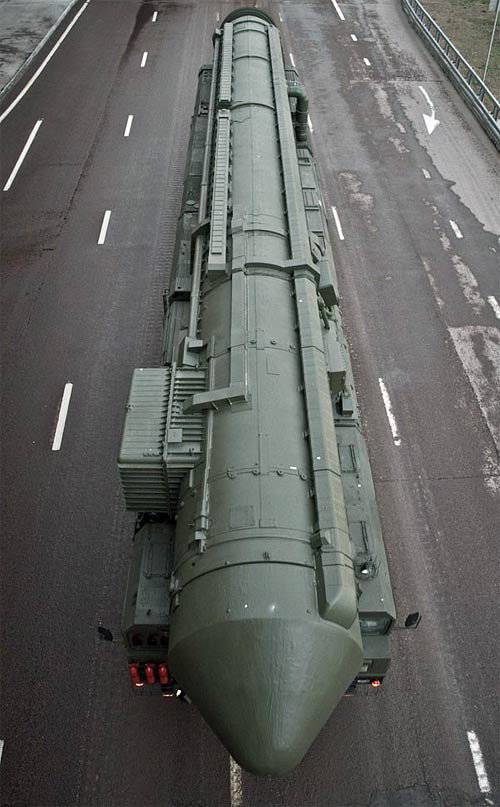 Owing to these limitations, the tactical and technical characteristics of the Topol-M missile system could not undergo significant changes and the main differences from the analogue (RT-2PM) are in the flight features and stability when penetrating the enemy's missile defense system. From the very beginning, the head part was developed with due regard for the possibility of rapid modernization in the event of the emergence of existing missile defense systems in a potential enemy. It is possible to install split-warhead warheads with individual guidance.

The Topol-M missile system is in many ways unique and approximately 1,5 times as large as the previous generation missile system in combat readiness, survivability and maneuverability (in the mobile version), the effectiveness of hitting various objects, even if it is opposed by the enemy. The energy capabilities of the rocket are provided by an increase in the drop weight, a significant reduction in the height of the active part of the flight path, as well as an effective overcoming of the promising missile defense.

In developing the Topol-M ISCs, the latest achievements of Russian rocket production and science were used. For the first time, a new experimental testing system was used during tests with high regulatory regimes of operation of aggregates and systems of the missile complex. This dramatically reduced the traditional amount of testing and reduced costs without losing reliability. 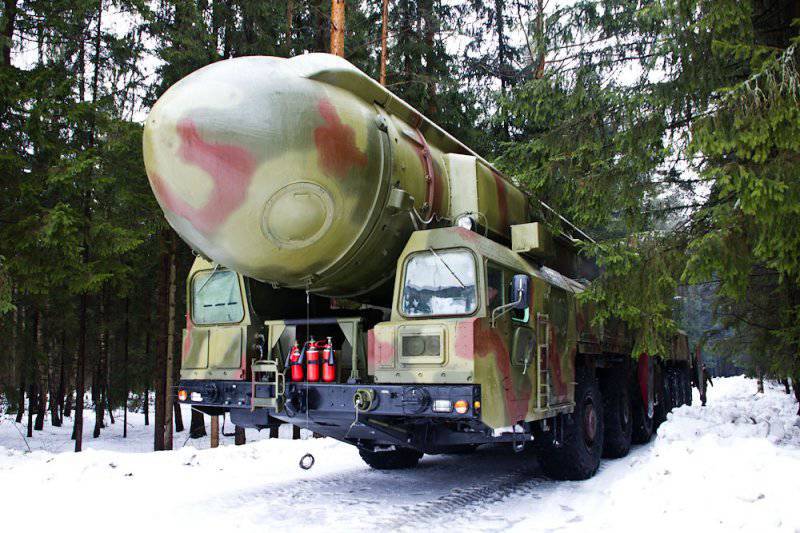 The complex is a monoblock three-stage solid-fuel rocket housed in a transport-launch container. The lifetime of a rocket in it is at least 15 years, while the total lifetime is at least 20 years. Among the features of the complex:
- the possibility of using existing mine launchers without significant costs (only the attachment system to the rocket of the container changes). Used mine launchers, which are exempt from decommissioned missiles, and PU according to the START-2;
- increased, in comparison with the "Topol", the accuracy of shooting, the vulnerability of missiles during flight from exposure to air defense weapons (including nuclear weapon) and readiness for start-up;
- the ability of rockets to maneuver during the flight;
- immunity to electromagnetic impulses;
- Compatibility with existing control systems, communications and software.

Rocket 15Ж65 (РТ-2ПМ2) has 3 mid-flight stages with powerful solid-fuel power plants. Marching rocket stages have a single-piece body "cocoon" made of composite material. The 15Ж65, unlike the “Topol”, does not have lattice stabilizers and steering wheels. Flight control is carried out by the central partly recessed rotating nozzle of the three-stage rocket mid-flight engines. Main engine nozzles are made of carbon-carbon material. For nozzle liners used three-dimensional reinforced carbon-carbon matrix.

The launch weight of the rocket is more than 47 tons. The total length of the rocket is 22,7 meters, and without the head part the length is equal to 17,5 meters. The maximum diameter of the rocket body (first stage) is 1,86 meters. The mass of the head part is 1,2 tons. The length of the first stage is 8,04 meters, the mass of the fully equipped stage is 28,6 tons, the running time is 60 seconds. The first-stage solid-fuel rocket engine at sea level is 890 kN. The diameter of the second and third stages is - 1,61 and 1,58 meters, respectively. The running time of the steps, respectively, is 64 and 56 seconds. Three solid propulsion thrusters provide a quick set of speed, reducing missile vulnerability in the upper stage, while modern control systems and dozens of auxiliary engines provide maneuver in flight, making the trajectory difficult to predict for the enemy. 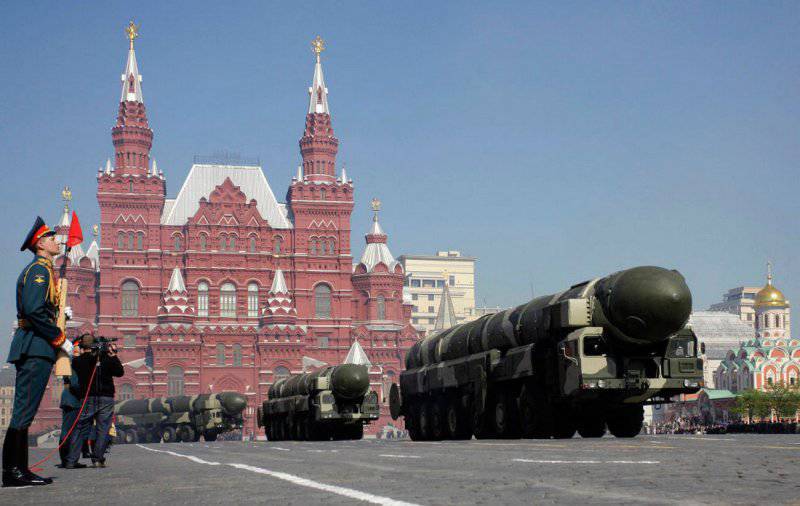 A monoblock thermonuclear detachable warhead with a thermonuclear 550-kiloton warhead, unlike strategic intercontinental ballistic missiles of another type, can be replaced in a short time by a warhead having 150 kiloton separable warheads of individual targeting. In addition, the missile complex "Topol-M" can be equipped with a maneuvering head. The new nuclear warhead, according to media reports, can overcome US missile defense, as evidenced by the results of tests of the complex (November 21 2005 of the year) with a new warhead. The probability of overcoming American missile defense is currently equal to 60-65 percent, in the future - more than 80.

It should be noted that when creating a warhead of an ICBM, the technologies and developments obtained during the creation of a warhead for Topol were used to the maximum, which reduced the cost and shortened development time. The new warhead, despite this unification, is much more resistant to the damaging factors of a nuclear explosion and the action of weapons, which is based on new physical principles, as compared to its predecessor, has a lower specific gravity, and also has more sophisticated mechanisms to ensure safety during transportation, storage and being on alert. The warhead has an increased efficiency of fissile materials. This warhead was created without testing components and parts during full-scale explosions (for the first time for the domestic military industry).

The 15ЖХ65 missile is supplied with a complex of anti-missile defense breakthroughs (PCB PRO) which include passive and active false targets, as well as means of distorting the characteristics of the warhead. False targets from warheads are indistinguishable in all ranges of electromagnetic radiation (laser, optical, radar, infrared). They make it possible to simulate the characteristics of the BB in almost all breeding grounds in all areas of the descending branch of their flight trajectory; they are resistant to PFYAV and others. These false targets are the first to resist super-resolution radar stations. The means of distorting the characteristics of the MS consist of a radio absorbing coating, aerosols-sources of infrared radiation, generators of active radio interference, and so on. 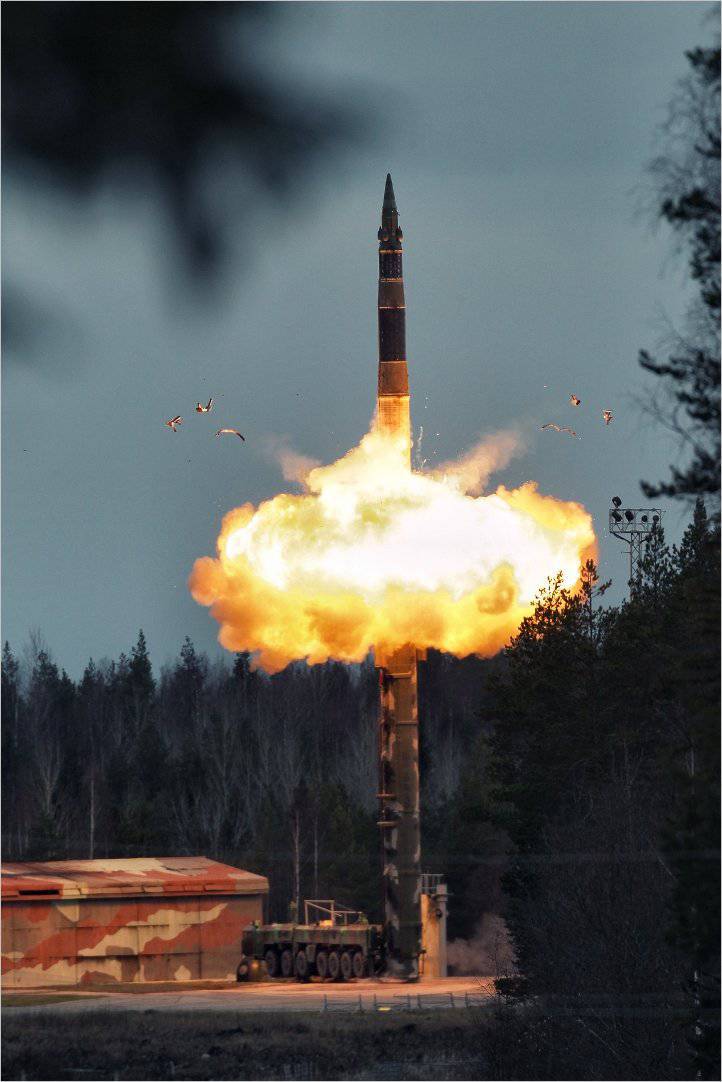 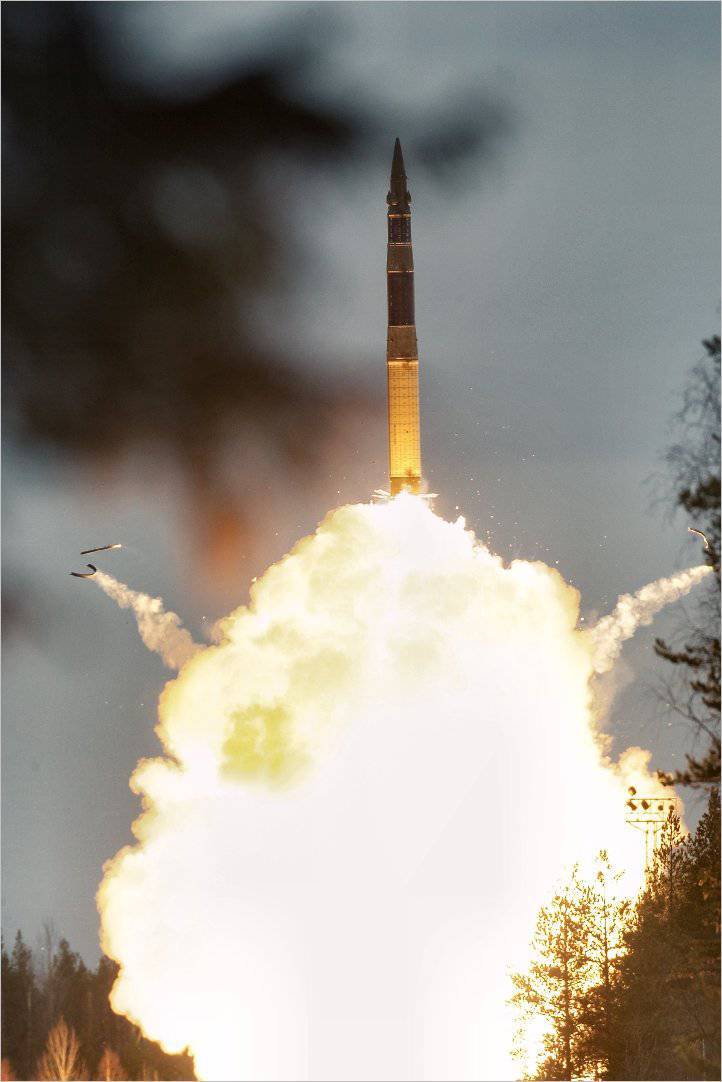 The 15ЖХ65 rocket can be operated as part of a stationary (15P065) or mobile (15P165) BRK. At the same time for the stationary version, mine launchers of rockets are used that are removed from service or destroyed in accordance with START-2. Stationary grouping is created by retrofitting the 15P735 and 15P718 mine launchers.

The 15P065 10 15Ж65 missiles in 15P765-35 launchers, as well as one unified KP type 15В222 of high security (placed in the mine on suspension with special depreciation), are part of the combat stationary mine missile complex 15P735. Work on the conversion of silo XNUMXPXNUMX under the placement of the Topol-M missiles was conducted under the leadership of Dmitry Dragun in the Vympel Design Bureau.

Rocket 15Ж65 in the process of combat duty is placed in the metal TPK. The transport and launch container is unified for various types of silos and combines the functions of a transport and handling machine and an installer. The transport and installation unit was developed at the Motor design office.

The mobile-based Topol-M intercontinental ballistic missiles are deployed as part of the 15P165 complex. The mobile-based missile is housed in a high-strength fiberglass transport-launch container on the high-traffic chassis MZKT-79221 (MAZ-7922) with eight axles of the Minsk plant of wheeled tractors. Structurally TPK practically does not differ from mine option. The launcher and its adaptation to the tractor was carried out by the TsKB "Titan". Serial production of launchers is carried out at the Volgograd production association "Barricades". The mass of the launcher is 120 tons, width - 3,4 meters, length - 22 meters. Six out of eight pairs of wheels are swiveling (the first and last three axles), which provides exceptional maneuverability for such dimensions (turning radius, for example, is just 18 meters) and maneuverability. Ground pressure is two times less than that of a conventional truck. Launcher Engine - 12-cylinder V-shaped 800-strong diesel engine YMZ-847 with turbocharging. The depth of the ford is 1,1 meters. When creating aggregates and 15P165 systems, several fundamentally new ones were used. making. For example, the system of incomplete hanging allows you to deploy the launcher "Topol-M" on soft soils. Improved maneuverability and permeability of the installation, increasing its survivability. Topol-M can launch missiles from anywhere in the position area and has improved camouflage against optical and other reconnaissance assets. 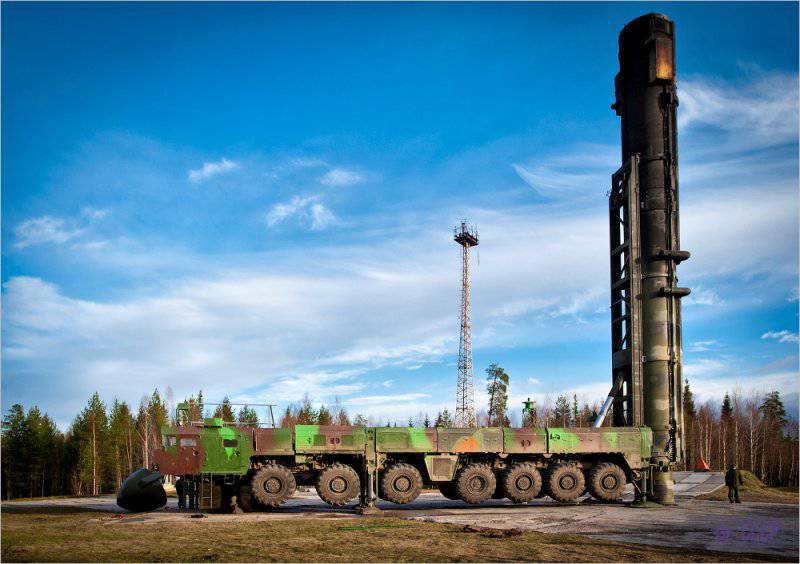 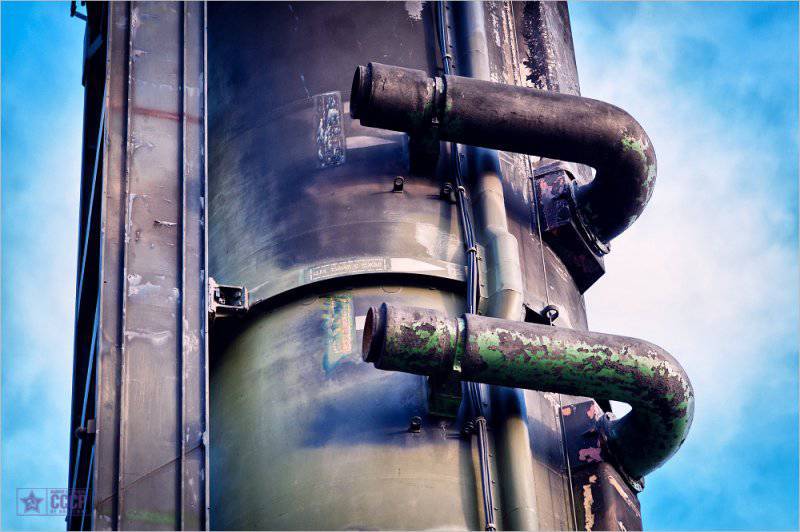 The characteristics of the Topol-M missile system make it possible to significantly increase the readiness of strategic rocket forces to perform combat missions in various conditions, to ensure secrecy, maneuverability and survivability of individual launchers, subunits and units, as well as autonomous operation and reliability of control during a long time (without replenishing inventories). The aiming accuracy is almost doubled, the accuracy of geodesic data determination is increased by one and a half times, and the preparation time for launch is halved.

The rearmament of strategic missile forces is carried out using the existing infrastructure. Fixed and mobile options are fully compatible with existing communications and command and control systems.