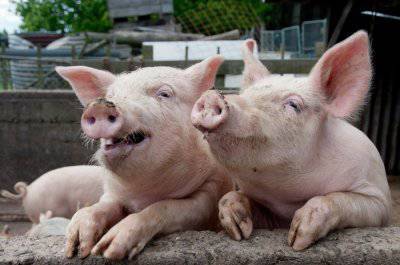 Gaining momentum историяdue to the fact that Russia puts a barrier to imports of foreign agricultural products. The first months of 2013 of the year were very loud for a variety of bans and restrictions in terms of import into the territory of the Russian Federation of foreign products of the agricultural sector. Initially, the ban on imports touched chilled meat from the United States, then it spread to turkey, offal, and frozen pork and beef. Ahead - a ban on the import of chicken meat.


In addition to the American products, German meat and dairy products were banned from the Rosselkhoznadzor. In each of the cases mentioned, the Russian side cites the reasons that led to the restriction or a complete ban on the import of agricultural products from the United States and Germany. One of the main reasons for the occurrence of restrictive measures in relation to, for example, American products is the fact that such a food additive as ractopamine is actively used in the USA for growing farm animals. This additive is banned in the EU, and on this basis, Washington supplies to Europe products without ractopamine. Before the imposition of restrictions on the import of meat from the United States, Washington, frankly speaking, paid little attention and saw the Russian market as that segment of the world market, where it was possible, excuse me, to drag out all those products that are prohibited from being shipped to other countries (EU countries , eg).

To deal with the situation related to the ban on the import of meat products from the United States, it is necessary, let's say, to begin to see the root, which according to official ideas in this situation is the very ractopamine. What kind of animal is this, which was ordered the road to Europe, but on the presence of which Rosselkhonadzor looked through his fingers before the beginning of building barriers? Or did not watch?

Ractopamine, as already mentioned, is a special feed additive that is designed to intensify the growth of muscle mass in animals. If we talk about growing pigs, raktopamine in this case is used as a special substance that allows you to "deceive" the life cycles of this animal. The meaning is approximately as follows: as soon as a pig at the genetic level (after reaching a certain age) loses the ability to build muscle, it begins a period of growth of the fat layer. Obviously, the world market lard is not in demand such as pork, because the farmers who are engaged in the industrial breeding of pigs came to the aid of science, which gave rise to ractopamine. In essence, this beta agonist supplement was used to increase protein synthesis in the animal, resulting in savings for its daily nutrition, and at the same time its (animal) muscle mass was growing.

It should be noted that the use of ractopamine is permitted in 27 countries of the world, including North American countries, Brazil, etc. More than 120 countries (Russia with 2011 is among them), the use of ractopamine as an additive in feed for farm animals is under ban. The ban on ractopamine in agriculture is related to the fact that, after a number of studies, the negative effects of eating meat from animals, for which the additive in question was used as a complementary food, were discovered. Studies have shown that ractopamine actively stimulates the so-called beta-receptors in the body, increasing blood pressure and disrupting metabolism. At a certain stage of eating meat with ractopamine, a person begins to feel a surge of energy and vigor, but after a long ingestion of this meat, he (in humans) increases the risk of arrhythmia and even a sudden stop of the heart muscle, stress conditions become more frequent, and sleep disturbances occur.

Naturally, those countries that actively use ractopamine for breeding farm animals, while exporting meat themselves, believe that the research results have been sucked from the finger, but no refutation has yet been offered to deny the negative impact of the feed additive. The only thing that appeals to the same Americans who are now losing the Russian market for meat products is the decision of the Food Codex Commission (Codex Alimentarius). This decision concludes that the specialized research groups of the United Nations last summer announced: the use of ractopamine in the production of meat products does not affect human health. It is noteworthy that the absence of negative effects of ractopamine on the human body was ascertained precisely when many large importing countries of foreign meat decided to classify this feed additive as prohibited or simply undesirable.

Honestly, it is difficult to imagine a situation in which the UN would take a different decision on ractopamine, because we will not forget who is the main financial donor of this organization ... With the particular desire of the main financial donor, they may even call sarin or mustard substances that bring exceptional benefiting the human body ...

With ractopamine more or less sorted out. So, immediately after Russia announced the refusal to purchase meat in those countries where this feed additive is used, many foreign countries decided to meet the demands of the Rosselkhoznadzor. For example, Brazil already now declares that it is ready to supply meat products to Russia that are in compliance with our sanitary standards.

Germany, in relation to which certain agricultural products are banned by Russia (not in connection with ractopamine, but in connection with the legal intricacies of the German veterinary control), also announced that it was ready to meet the Russian Federation and consider this type of veterinary (even joint) control that suits Moscow. Simply, both Germans and Brazilians did not want to lose the Russian market, which brings large sums in the budgets of these countries in the form of trading income.
But in this case Washington again decided to go its own way.

Recall that the Rosselkhoznadzor, in the fall of 2011, made a notification to foreign agricultural producers and distributors that Russia does not intend to purchase products with ractopamine in the future. Recall that a few months after that, the UN conducted its research and announced that there was nothing terrible in ractopamine. The chain can be traced: they say, where you will get away from our (North American) meat - both you bought and will buy - even with ractopamine, even with bleach ... Oh, our (UN) researchers understand more of you (Russian) in meat ...

However, Russia did not give in to this apparent pressure and remained unconvinced. And because the step with the ban (which, it is necessary to emphasize once again, has been announced for more than a year), caused a real hysteria overseas Agriculture Minister Tom Vilsack, along with United States Trade Representative Ron Kirk, made a rather dramatic statement addressed to Russia. The statement says that both of these honorable gentlemen are extremely disappointed with Russia's decision to ban the import of meat products from the United States, in fact, quote:

"With its (production) production, the highest international standards were observed."
But the apogee of the document:

“The Russian Federation has not ratified the code and the international (read American, approx. Author) standards approved in it, which raises the question of its (Russia) commitment to fulfill its obligations in the international system of trade agreements.”
The message of pressure on Russia through the WTO is obvious. They say that you are now in the World Trade Organization, which means that you must “hawk” our products without any internal commissions and barriers.

In this regard, the appointment of the WTO, which is not to protect the buyer from low-quality products and support domestic producers in each of the countries, once again manifests itself, but to push the products of "exceptional" states, protecting them from outside competition. If Russia can defend its industrial independence and declare that it (Russia) will play by international rules in the case when these rules do not infringe on domestic interests, then it will only be possible to applaud.

By the way, in the same United States there are reports that Moscow declared a new Cold War to Washington (apparently, a war with frozen meat ...). They say that this is another step directed against attempts to introduce democratic norms in Russia - almost a new response to the “Magnitsky Act”.

Apparently, Washington forgets that he was warned about a possible ban on the import of meat to Russia long before the appearance of the same act. Obviously, this very act is already causing real paranoia among the representatives of the American authorities themselves. Perhaps now even the excitement of the water masses in the Gulf of Mexico will be attributed to the fact that these Russian submarines “muddy the waters”, protesting against the adoption of the Magnitsky list ...

Meanwhile, it should be noted that Russia is far from the only country that imposes restrictions and bans on the import of American agricultural products. For example, since 2003, Japan has not bought beef in the United States after finding cattle encephalopathy in it. But Japan has long been the largest Asian market for American meat products. Nearly 10 for years, Tokyo did not make concessions, although the Americans claimed to the Japanese authorities that spongiform encephalopathy had long been defeated, that meat from the United States complied with all norms ... Only a few days ago, Washington ensured that Japan resumed imports of meat from the States. But if, after the ban from the Russian Federation on the import of American meat, Japan would continue to buy meat from other producers (not from the US), then the losses of the American agricultural industry would simply be huge ...

According to the Rosselkhoznadzor for January 2013, more than seven dozen violations of the legislation of the Customs Union were revealed. The violations concerned both non-observance of veterinary norms and legal aspects of trade. Such countries as Australia, Italy, China, USA, Singapore, Finland, Germany, Cuba, Norway, Sweden, Poland, France, the Czech Republic, Ukraine and a number of others are among the violators of the CU legislation. 1537 tons of agricultural products were found to be inappropriate to the CU standards. Many of these countries are trying to eliminate the inconsistency in action. Many, but not the United States ...

Washington is trying to look for any reasons to realize its interests to the detriment of the interests of Russia, even making frozen policies on frozen turkeys.

Ctrl Enter
Noticed oshЫbku Highlight text and press. Ctrl + Enter
We are
And what about our WTO?Meat and airplanes: Onishchenko's long arm?
Military Reviewin Yandex News
Military Reviewin Google News
88 comments
Information
Dear reader, to leave comments on the publication, you must to register.