Gallipoli - the place where the surrendered Russian army died

November 25, 2010
0
90 years ago - 22 November 1920 of the year - several thousand Russians were thrown onto a bare coast near the small, half-ruined Greek town of Gallipoli. 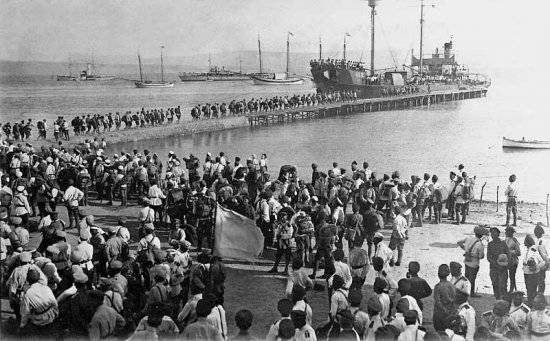 The shipwreck that caused the occurrence of such a large number of Robinsons and Fridays should rather be called Birthmarks. These half-starved people who had almost no money and belongings were the remnants of the Russian army of General Wrangel. 25 596 men, 1153 women and 356 children who did not wish to surrender to the mercy of the Bolshevik winners and gone into obscurity on the remnants of the Black Sea squadron. Details of the tragedy told "AIF" Alexey Grigoriev, chairman of the Union of Descendants of Gallipoli.

After the 1912 earthquake of the year, the frequent bombardments during the First World War and the camps of various armies, Gallipoli was in a deplorable state. Therefore, in the town itself only the troops and a small part of the officers were housed - those who arrived with their wives and children. The bulk of the army camped about six kilometers from the city.

Locals cautiously watched the landing of so many dirty, tattered armed people. Soon, these fears dissipated. The arrivals, barely settled down, began to clean the city, repair the old aqueduct built by the Romans, repair the sewers and other installations. The number of Russians exceeded the number of local residents several times. But they soon felt safe. For the entire stay of the Russians in Gallipoli, there was only one case of robbery: a soldier robbed and seriously wounded the Gallipoli dentist, but was arrested, tried, and severely punished. Relations with the Greeks, the largest community of the city, began immediately thanks to Metropolitan Constantine, who provided the opportunity to serve in the only surviving church. At Christmas, the Greeks made a Christmas tree for children with food and gifts. Turks attended all Russian parades and ceremonies. They renamed the head of the Gallipoli Russian army, General Kutepov, to Kutep-Pasha. It got to the point that they turned to him to resolve disputes among themselves. Both those and others as far as possible sheltered Russian families. Diversity of residents except the Greeks and Turks, Armenians and Jews added a battalion of Senegalese shooters - 800 people. Formally, the city was the Greek prefect, but in fact the power belonged to the French commander - the battalion commander of these black citizens of the European ally. The Senegalese — Seryozhi and Andryushi, as the Russians called them — were lovely, primitive people. Only the French were wary of our army, refusing to call the Russian army other than as refugees. 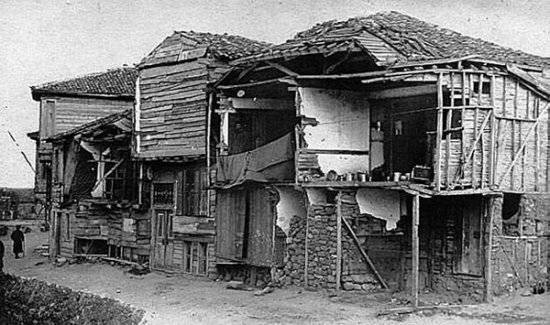 The Russians lived very modestly. In one room there were several families. Those to whom premises for
there was not enough time, they dug dugouts themselves or erected among the ruins shacks of cracked stones and half-rotten logs. The cadets were settled in the most unexpected places. The technical regiment occupied a caravanserai - a centuries-old building with many cracks in the walls during the earthquake. Students of the Kornilov School stood on a stand in a heavily damaged mosque. The choirs that collapsed at night killed 2 and injured 52 junkers. The injuries then got an 4 officer. Hospitals occupied the best preserved buildings, large tents. The most pressing issue was nutrition.

The ration given by the French barely reached 2 thousand. Calories - very few for healthy men. By the way, it was later calculated that during the 10 months of life in Gallipoli, the French authorities spent about 17 million francs on Russian food. The value of the goods received from Wrangel as payment by the Allied authorities amounted to 69 million francs. Earnings were almost impossible. Some going off
many kilometers from Gallipoli, brought firewood for sale. Someone learned to catch octopuses with their hands - the Russians did not eat them themselves, but they sold them to the locals. Once, the Greek prefect, being a guest of General Kutepov, said: “For more than half a year the Russians have been living in our houses, eating only what they get rations, hundreds of chickens and other birds roam around their houses. I assure you that any other army would have eaten them long ago. ” Having seen Turks, Germans, Englishmen and French, the prefect knew what he was talking about.

The troops were tormented by typhoid, 1676 people got sick of it, that is, almost every tenth Russian. Only due to the efforts of sanitary personnel, the mortality rate did not exceed 10%. He died of typhoid fever General Shifner-Markevich, who became infected while visiting patients. Soon, malaria was added to this epidemic. After all, the soil under the tent camp, hardly started to rain, turned into a swamp. During periods of drought, scorpions and poisonous snakes regularly climbed into the tents, despite all the preventive measures. Despite the severity of living conditions, for constant hunger, military discipline was generally maintained. Apathy, which was the result of a catastrophe, was gradually replaced by hope. In many ways, this was facilitated by regular sports and parades. Particularly brilliant was the parade in February - on the occasion of the arrival of General Wrangel and in July - on the occasion of the consecration of the monument at the Russian cemetery. The materials for its construction were the stones brought by each Russian, who turned out to be by the will of rock in Gallipoli.

In August, 1921 began the withdrawal of troops. The officers and the cadets traveled around the world ... But everyone left, carrying the words of General Kutepov into the heart: история Gallipoli. And I can say it closed with honor. And remember: no work can be humiliating if a Russian officer works. ”