February 11 2013
19
Robotics is developing quite actively today. The US Navy is about to embark on a project that is completely based on the use of modern robotics. The meaning of the project is that naval sailors will use a robotic group to deliver ammunition with it. The highlight of the project is that the robots themselves will select the necessary projectile or rocket using the active electronic determination of the type of pheromone smell. 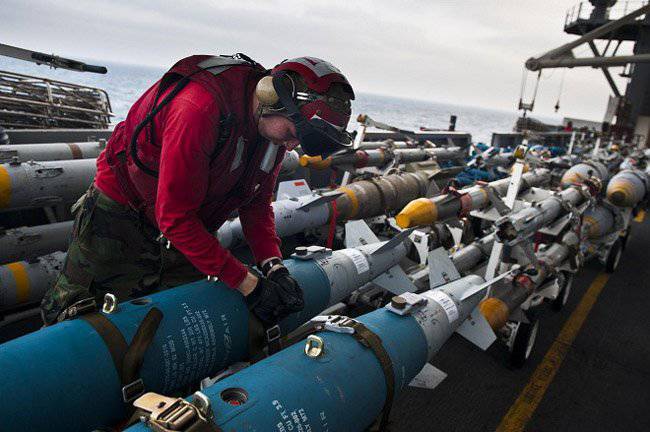 Those people who were engaged in sorting and delivering to the deck of an aircraft-carrying cruiser know very well how exhausting this work is. That is why the US Navy decided to entrust it not to people, but to robots.

Initially, the US military are planning to use the so-called exoskeleton. The point is that over time, special software and hardware systems that will be equipped with robotic systems will be able to find the desired ammunition in the literal sense of the word by smell. As soon as the electronic “nose” of the robot finds the ammunition, it (the ammunition) will also deliver it on deck to the aircraft.

Today there is already a similar project, which is designed for the use of robots, which determine the version of the ammunition for special optical markers. These markers are applied both to missiles with missiles, and to certain deck locations to which they need to be delivered. However, this project stalled due to the fact that the robot often has to work in conditions of minimum illumination, and therefore they could only qualitatively recognize the necessary ammunition in a small percentage of cases.

The new principle involves the chemical side, namely the process of recognizing the smell, which will be emitted by markers of another type. Robots in this case will be able to work even in total darkness.

However, here its difficulties emerge. Smells are ephemeral. For example, if the work will be carried out in conditions of smoke or torrential rain, how will the robotic “sniffer” behave, even experienced specialists will not say so. In addition, odor can be affected by high humidity or exposure to ultraviolet rays, which can also disorient the robot.

For the time being, the task of the US Navy is to create semi-autonomous robotic systems that are capable, including under human control, of raising ammunition to the ship’s deck from storage facilities and delivering them to the necessary air board. After 20 min. after the right rocket is in the right place, the marker must lose its smell, otherwise other robots might “become interested” and start re-working. The robot in the mode of intensive labor, according to the ideas of sailors, should work successfully for about a week - this is at least.

The timing of the implementation of this robot project is not specified yet. According to preliminary data, it can be translated into reality by 2020 year. The presence of new-generation robots will reduce the crew of aircraft carriers.
Ctrl Enter

We are in Yandex Zen
I fight for the electric body! Ground mobile robots on today's and tomorrow's battlefield. US Technology Overview
Military Reviewin Yandex News
Read Military Reviewin Google News
Loading ...
19 comments
Information
Dear reader, to leave comments on the publication, you must to register.