The death of the BOD "Brave"

February 7 2013
61
In Sevastopol, in the territory of the Kommunarov cemetery one can see a small, modest monument. It is located between the mass grave of the crew of the battleship Novorossiysk and the monument to Lieutenant P. P. Schmidt. An inscription stamped on a marble monument informs: “The seamen of the“ Brave ”who died during the execution of military duty in August 1974 of the year”. It also contains a list of the 24 surnames of the dead sailors. You will not be able to gather more information from this monument, in the USSR you didn’t particularly like to spread the death of this ship.

Large anti-submarine ship "Brave" was included fleet January 25, 1966, and for his fairly short life managed to make 7 military campaigns. From June 5 to 30, 1967, the ship performed the combat mission of assisting the Egyptian armed forces and visited Port Said. In 1968-69, the Bold Valiant military-technical complex underwent a current repair at the 61st plant in Nikolaev, during which its missile armament was modernized. Since 1969, the captain of the 3rd rank Ivan Petrovich Vinnik was appointed captain of the vessel.

In 1970, the BOD was declared an excellent ship of the Black Sea Fleet, took part in the Ocean maneuvers, went to the shores of Cuba and the Atlantic. In 1972-1973, the ship underwent another eight-month repair at the docks of Sevastopol. As part of the detachment of the ships of Rear Admiral L. Ya. Vasyukov, the courier company "Brave" visited the ports of Italy - Taranto and Messina with friendly visits. The last battle trip of the ship in the Mediterranean took place from November 10 1973 of the year to March 6 of the year 1974. "Brave" was part of the 70-th brigade of anti-submarine ships.

BOD "Brave" belonged to the ships of the 61 project of the type "Komsomolets of Ukraine" (according to NATO codification - Kashin). It was a type of large anti-submarine ships that were in service with the Soviet fleet from 1964 to 1991 a year, and later were in service with the Russian fleet. On the 2012 year, only the 1 ship of this type was retained as part of the Black Sea Fleet of Russia - TQS “Sharp”. He remained the only ship from the 20 ships of the project, which managed to join the USSR fleet from 1962 to 1973 years. The rest of the 18 ships were decommissioned and dismantled for metal, another one - BOD Brave - sank. 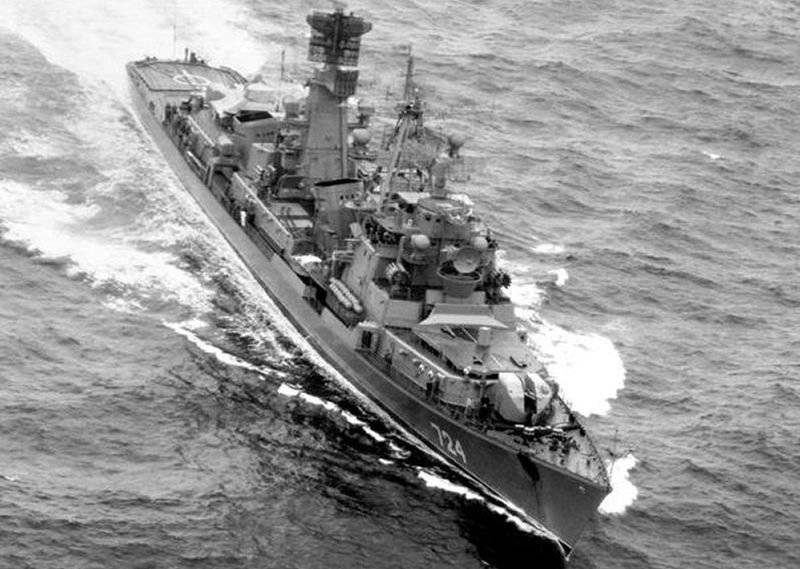 All ships of this project had developed radar weapons and underwater acoustics, as well as excellent seaworthiness, maneuverability. These ships differed and a great appearance and architecture.

The death of the BOD "Brave"

From 4 to 7 in August 1974, the Brave BOD took part in the fleet's regular exercises, and from August 27 the ship was to become the flagship control ship during the 2 stage of the exercise. BOD "Brave" was to ensure the shooting of small rocket ships, as well as take part in anti-submarine exercises with a torpedo firing. 29 August 1974, the ship under the control of the captain of the 2 rank I.P. Vinnik stepped out into the open sea and successfully conducted torpedo firing. At dawn on 30 August, BOD embarked on a raid in Streletskaya Bay, in order to take on board Rear Admiral V. Kh. Sahakyan, the Chief of Staff of the CERF, as well as a group of senior fleet officers. On this day, the ship was supposed to provide anti-aircraft fire from small rocket ships at the range near Cape Chersonese. In 9: 55 in the morning the ship arrived at the landfill, it was training and combat alert. 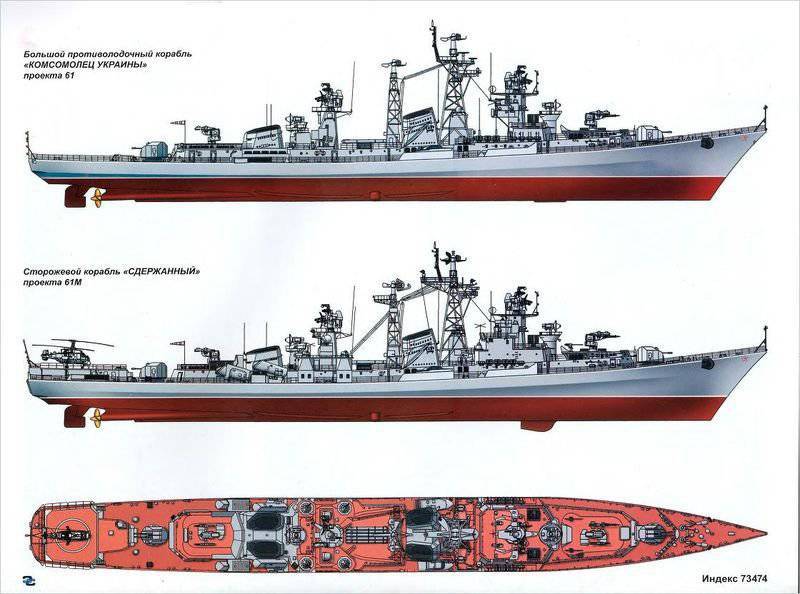 After just 3 minutes in 9: 58 on the bridge felt a slight shake of the vessel, as if a small explosion had occurred in its stern. After that, the cars were immediately stopped, an emergency and combat alarm was announced on the ship. After 10 seconds after the first ship, a stronger explosion shook, behind the feeding tube a sheaf of flame appeared and a well-visible cap of white smoke. After another 20 seconds there was a third explosion, which occurred in the vicinity of the rocket cellar #8. A pillar of flame rose above the site of the explosion and thick black smoke was thrown down. The explosion was of such strength that it tore the lid of the cellar and, together with the PU of anti-aircraft missiles, threw it onto the stern chimney. After that, a large fire began in the area of ​​BOD, and the ship’s personnel began to struggle for unsinkability and survivability.

As it was later found out, the following happened: after the announcement of a military combat alert on the ship, the midshipman, who was behind the control panel of the missile control room of the stern cellar No. 8, in which 15 B-601 rockets were stored in 2’s vertical drums in combat condition, acting according to instructions , ordered the sailors on duty at the post to connect an external power supply. After that, he moved the toggle switches on the power supply console to the on position. Immediately after clicking the last toggle switch, he saw through the porthole a sufficiently strong bundle of flame on the left drum. Without launching a fire extinguishing device, the midshipman left his battle post and rushed down the corridor to the bow of the ship, where he was overtaken by a strong explosion, whose blast wave threw him aside.

In the course of the investigation, it was possible to establish that exactly 8 seconds had passed from the moment of appearance of fire in the cellar No.18 until the moment of a strong explosion. Subsequently, it was found that the flames in the cellar appeared due to the spontaneous activation of the main engine of one of the anti-aircraft missiles. This was followed by the launch of the rocket engine of its own starting stage, which led to the launch of the starting engines of several more rockets. All this led to a sharp increase in pressure in the cellar (approximately 3 of the atmosphere), as a result of which a force of approximately 2500 tons began to act on the cellar lid, which caused its breakdown. As a result of the explosion in the onboard lining of the ship in the area of ​​the 8 cellar, 2 holes were formed, through which fresh water began to flow into the compartments.

In 10 hours, a combat alarm was announced on the ship, and then an emergency alarm, at that time a fire was raging in the 8 cellar, in the 9 and 10 corridors. BOD got roll in 12 degrees to starboard. Between 10: 10 and 10: 20, the ship was given a command to turn on the water protection system, irrigation and flooding of cellars No.6, 7 and 10 began. However, it was not possible to carry out our plans, as the pipelines failed. An explosion from a ship's utah threw 7 sailors into the sea, which were picked up by the ships that approached the scene of the incident.

In 10: 23, the “Brave” personnel, who were located in the stern compartments of the ship, were ordered to be evacuated from the ship. At this time, the fire on board was gaining momentum. At the same time, the cellars of the ammunition No.6 and No.7 constantly poured water from the hoses. In 10: 40, the destroyer “Conscious” approached the BOD, and after another 12 minutes, “Poor”, from which a special rescue party was landed on “Brave”. In 10: 54 the destroyer "Conscious" took the BVO "Brave" in tow in order to divert the ship aground in the Chersonese region, at this time the ship's heel already reached 13 degrees. After 7 minutes on the "Brave" began the procedure of transferring fuel from right to port, but it did not help get rid of the roll.

Soon, the feed BOD plunged into the sea on the upper deck, and the roll to the starboard reached 16 degrees. Secret documents were quickly evacuated from the ship. In 11: 24, torpedoes were dropped into the sea, the ship's roll was reduced to 14 degrees. In this cellar ammunition №6 and 7 were flooded with water with the help of fire hydrants. In 11: 55, Komsomolets Ukrainy BOD arrived on the scene to assist.

In 11.59, the fire aboard the ship managed to be localized, white smoke began to fall from the cellars. However, after 7 minutes there was a breakage of the towing cables from the destroyer "Conscious", new cables began to start from the "Bedovoy". All this time the fire in the aft engine room of the ship continued. In 12.27, a command was given to shut off the water supply to the compartment, it was decided to use only foam. A chemical fire extinguishing system was activated in the stern engine compartment. The towing of a ship in distress with a speed of 3 knot began again in 12: 49, at this time the roll of the anti-submarine ship reached 17 degrees.

In 12: 55, the rescue ship "Beshtau" arrived at 13: 20 - CC-15 and CC-26, after a few more minutes the fire-decontamination ship "Flame". Foam was supplied from these vessels aboard the Brave Combat BOD to the area of ​​burning cellars. In 14: 30, an attempt was made to pump water from the feed compartments, but after 17 minutes an explosion of aircraft ammunition located in cellar # XXUMX occurred. Apparently, at the same time, the tank, in which 10 tons of aviation kerosene were stored, exploded. All this seriously complicated the situation, the ship's roll to starboard quickly reached 5 degrees, increasing to 19. In 25: 15, it has stabilized at 07 degrees. After another 27 minutes on the ship, the power to the instruments stopped and the lighting went off. In 3: 15, personnel received an order to evacuate a ship in distress, with the captain leaving the BOD last. 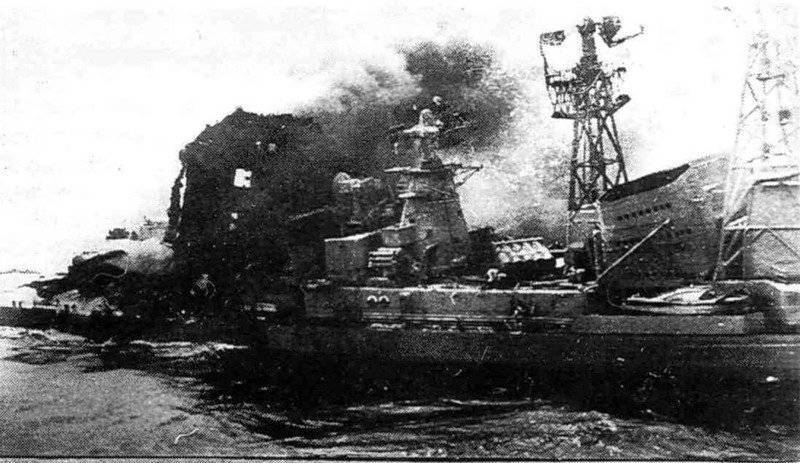 In 15.35, the Brave courier began to dive into the Black Sea astern without tipping, and the tugboat was given off from the destroyer Bedovoy. After just 12 minutes the ship completely disappeared under water. The depth in the place of its flooding was about 125 meters. In total, 5 hours of 47 minutes have passed since the detection of a fire on the ship until it was flooded. As a result of internal explosions and the resulting holes in the hull of the ship took on board almost 3600 tons of water, turned out to be flooded 6 impermeable compartments. At the same time, after the flooding of the 4-x compartments located in the stern, the trim and roll were stabilized, and the BOD had a positive stability. But when the water completely flooded the 2 compartment, the ship’s buoyancy was exhausted. However, even after sinking, the courage "Brave" showed a very high survivability. According to the specification, the ships of this project could remain afloat only after the flooding of the 3-x adjacent compartments.

Of the 287 people who were aboard the Bravo BOD, including those undergoing cadet training, 24 people were killed (19 sailors and 5 cadets). The entire personnel of the vessel during the struggle for survivability and unsinkability, as well as extinguishing the fire, acted skillfully and showed courage. All measures were taken to save the ship, but the damage resulting from the explosions made its rescue impossible. Subsequently, valuable equipment was dismantled from the sunken ship, and its hull was blown up on the ground.

Ctrl Enter
Noticed a mistake Highlight text and press. Ctrl + Enter
We are
How died battleship "Novorossiysk"Icy embrace of the North. Soviet submariners is dedicated
61 comment
Information
Dear reader, to leave comments on the publication, you must to register.