The Russian fleet is able to act. To the results of exercises in the Mediterranean and Black Seas. 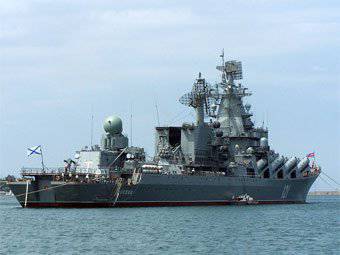 Russian teachings have ended fleet in the Mediterranean and Black Seas. Almost thirty ships, submarines and support vessels, as well as the sea, participated in them. aviation. Exercises of this magnitude have not been in the Navy for a long time. It should also be noted that the Mediterranean Sea has not seen the presence of our fleet on such a scale for a long time. The results of the exercises were summed up on board the cruiser "Moscow", which arrived after the exercises in the Cyprus port of Limassol. By the way, the end of the teachings does not mean that we are leaving the Mediterranean Sea. The presence of fleet forces in this region will be permanent. The situation requires constant coverage of the actions of other interested forces and does not allow to build hope in them, for the possibility of unilateral actions.


What were the goals of the exercises and how can they be considered successful? It will have to be distracted, because there is an opinion that the composition of the ship group involved in the teachings was simply not able to fulfill the training tasks that were worked out in them. For example, the tasks of anti-submarine defense were worked out by the composition of surface ships insufficient for its success. Well what can I say? Indeed, both to carry out anti-submarine search and percussion missions, and to protect and cover strike groups, and to ensure amphibious operations - the involvement of larger groups of ships is required.

However, one cannot agree that these exercises are only an imitation of the real ones. Yes, in a heterogeneous grouping of ships, combat missions were worked out by an incomplete composition of tactical groups. But let's be honest - the numerical and qualitative composition of the fleet is far from perfect. And the largest since the Soviet era program for the construction of warships - adopted precisely for this reason. In the next three years, the fleet will replenish 18 surface ships of the main classes and more 30 boats and support vessels. While new ships are not commissioned, it is important to accumulate experience in combat services, train crews and commanders, and train specialists in the repair and maintenance of equipment to work. And that is exactly what is being done.

Even for little interested people, it is difficult not to notice that the forces of the fleet are constantly at sea, conducting exercises or making campaigns. Last year, the intensity of planned training activities, live firing and long-distance campaigns, can be called unprecedented since the days of the Soviet fleet. The submariners of the Northern and Pacific fleets resumed combat duty at sea. In addition to exercises in the Mediterranean and Black Seas, we must recall unique interspecific exercises in the Central Arctic, in which more than 7 thousands of personnel took part, more than 20 surface ships and submarines, more than 30 aircraft and more than 150 units of military equipment. Signed were the Russian-Chinese exercises "Marine Interaction - 2012". The activity of the fleet in the Mediterranean makes it possible to recall the times of the Mediterranean operational squadron of the Soviet Navy (OPESK), if not from the point of view of the forces involved, then certainly from the point of view of permanent presence. Down and Out trouble started! I do not even want to recall the times when the departure from the mooring wall to check the mechanisms was considered a holiday.

But here another claim arises: “in all these teachings and campaigns a resource of technology is being developed - the entire fleet for repairs will soon arise”. Truly, you cannot please everyone! Rusting ships at the berths - bad; shooting and exercises are followed by campaigns - bad again. It can be noted on this occasion that the life of the ship equipment is produced not only during the exits to the sea, but also at the stops. And it is better to repair will be required after the combat services than after downtime. In contrast to the previous time, scheduled repairs and upgrades are not only ships and submarines that are in service, but also long ago put into reserve. For example, last year the modernization of the heavy nuclear missile cruiser Admiral Nakhimov began. It is planned to modernize the BOD “Admiral Kharlamov”, which was put into reserve in 2006 year. All the destroyers of the 956 project, even the “Battle”, which is in conservation, will be repaired and upgraded. And now, at Dalzavod, repair of the EM "Sturny" of this project is ending. Everything that was saved in those times when repair work was practically absent (except that the crews could do on their own) will continue to serve.

Now you can return to the past teachings. Following the results, the Ministry of Defense made the following statement: “In general, according to the General Staff of the RF Armed Forces, the purpose of the exercise - demonstration of the naval presence in the far sea zone, military force and the determination to use it - has been achieved. The main task of the exercises has been resolved - the military command and control and naval forces are ready for the fulfillment of missions in the far sea zone ”. In other words, there were two tasks: to demonstrate that we would defend our interests in the Mediterranean, and to fine-tune the system of combat control of fleet forces operating at a considerable distance from bases and communications centers.

Regarding the first task, the following should be said. The constant presence of the forces of our fleet near the Syrian coast produces the proper effect — there is no longer any talk of open aggression. But this does not mean that it is impossible. The Patriot anti-aircraft missile systems arrived in Turkey, whose task in the event of aggression will be protection against Syrian aviation. Not for any other purpose - they are not needed. Although the Mediterranean Sea left the American aircraft carrier and escort ships, the NATO navy maintains sufficient forces in the region to support the ground operation. Therefore, it turned out to be necessary to more clearly demonstrate their intentions by conducting large-scale military exercises with live firing. For a simple "demonstration of the flag" began to get used to. And in order not to create the impression that we are only set to “attendance” - we had to remind ourselves a little louder, so to speak, update the impressions.

As for the second task, it is perhaps one of the most important for our fleet. In connection with the changes in the structure of the operational management of the Armed Forces, several new tasks have arisen. The new management system needs to be tested, the development of effective management mechanisms and just to build experience. The old system worked like a clock. But in her the management of the fleet was isolated from other types of armed forces - each of them had its own system of command posts and communications centers. This did not allow making the administration flexible and effective in the conditions of the new forms of warfare. To remedy the situation, new inter-specific combat command and control centers were created, which assumed the task of commanding all available forces in four strategic sectors, including fleet forces. In the central subordination remained only the fleet component of strategic nuclear forces. There was a reasonable question: who will manage the fleet in the far sea zone, which goes beyond the strategic directions? For example, the approach to Syria of the aircraft carrier Admiral Kuznetsov was controlled by the command of the Western direction, since the Northern Fleet belongs to the USC Zapad. And if the group will be inter-fleet? In this connection, even a heated discussion flared up: maybe it is worth creating a separate command to control the fleet forces in the far sea zone?

It turned out - this is not required. In their areas of responsibility, the fleet and other forces will be controlled by strategic commands. And in areas outside of these zones - management will be central. But in order to test this system in action, it was necessary to conduct exercises involving the forces of all fleets. In the course of the exercise, the communication systems, data transmission and display of the tactical situation worked out regularly, confirming the efficiency of the new system.

In conclusion, I would like to note once again that our fleet will be present in the Mediterranean Sea, since this region remains one of the most important for the future of the whole world. And in the foreseeable future, this presence will only strengthen.

Ctrl Enter
Noticed oshЫbku Highlight text and press. Ctrl + Enter
We are
Results of the week. "Well, do not change me because of every idiot!"
Military Reviewin Yandex News
Military Reviewin Google News
47 comments
Information
Dear reader, to leave comments on the publication, you must sign in.