In September 1969 of the year, the Leningrad Kirov Plant presented to the military a draft of the new ACS “Peony”, created on the basis of the T-64 tank chassis in an open-rooted design, while at the same time the Volgograd Barricades plant presented its project on the 429 object's chassis open performance. As a result, the winner was a project based on the chassis object 429. A joint decision of the Council of Ministers of the USSR and the Central Committee of the CPSU from 8 July 1970, it was decided to start work on the 203,2-mm self-propelled artillery 2С7 "Peony", which would have a range of 32 km. conventional ammunition and 42 km. active-reactive ammunition.

Already 1 in March 1971 of the year, the Main Agrarian University of Ukraine approved the revised requirements for the performance characteristics for the designed artillery system. In these requirements it was proposed to consider and work out the possibility of using a special shot ZVB2 howitzers B-4 of the same caliber. The maximum firing range of an ordinary 110-kilogram projectile was given in 35 km., And the minimum ricochet firing range was 8,5 km. The firing range of the special active-reactive ammunition was supposed to be 40-43 km. KB No. XXNX of the Leningrad Kirov Plant was appointed as the lead developer of the new ACS “Pion”. 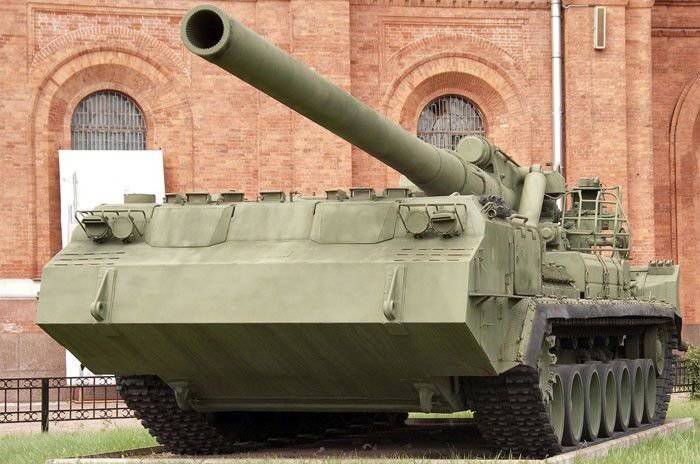 At the same time, the Barricades factory was responsible for the development of the artillery part of the installation, the chief designer GI Sergeev was in charge of these works. Volgograd residents completed the artillery unit according to the classical scheme, but at the same time with a number of features. Among other things, it is possible to note the fact that the trunk of the new installation was not monoblock - it was collapsible and consisted of a free pipe, breech, casing, sleeve and coupling. This construction of the barrel in the 70-s of the XIX century was proposed by engineer A. A. Kolokoltsev, who worked at the Obukhov plant. The choice of this design was due to the fact that the artillery systems of special power are characterized by a fairly rapid wear of their rifled part when firing. In this case, all-in-one monoblocks are sent for replacement to special plants, which requires time-consuming, during which the gun is inactive. In collapsible trunks, such operations can be performed on the territory of artillery workshops that are located in the front line.

In the 1975 year, after conducting a series of factory and state tests, the Pion self-propelled artillery gun was adopted by the Soviet Army and went into mass production. SAU 27 "Peony" entered into service with artillery brigades of special power. In Leningrad, at the Kirov factory, a special 216 object chassis was manufactured and the final assembly of the gun was carried out, and the artillery unit was produced in Volgograd at the Barricades factory.

SAU 27 "Peony" was made according to the reckless pattern, the gun self-propelled gun was placed openly on a tracked chassis in the rear part. In front of the building was located the department of management, followed by the engine-transmission department (MTS), followed by the calculation department and the combat (feed) department. The self-propelled artillery installation was serviced by a calculation in the number of 14 people, of which 7 people were crews of SAU. During the march, the crew was located in the offices of management and calculation, while the remaining 7 people were in a special armored personnel carrier or truck. 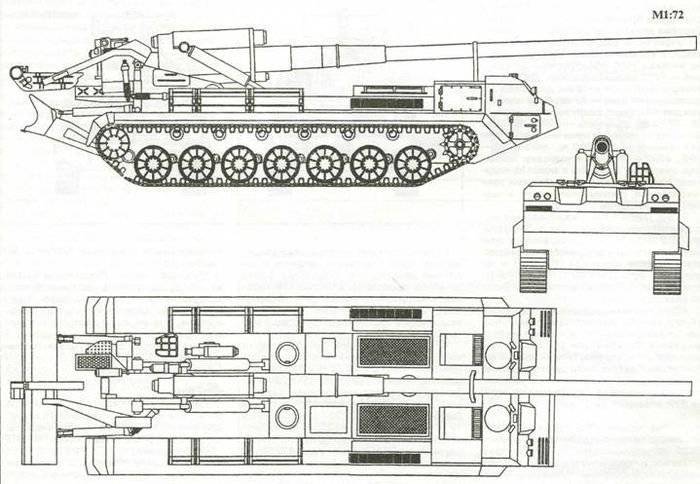 A powerful 203-mm gun was mounted in the stern of the tracked chassis. Constructive rejection of the use of the muzzle brake allowed to provide a muzzle wave of low pressure at the calculation workplaces, which made it possible to abandon the installation of special protection for the members of the tool calculation. The 203-mm gun was equipped with a push-pull piston shutter, the shutter was closed and opened automatically with a special mechanical drive, while it was possible to perform this operation in manual mode. Submission and subsequent delivery of the projectile was carried out using a loading mechanism that could work at any angles of vertical and horizontal guidance.

Management of loading operations was carried out from the castle lock. The shells were delivered to the gun with the help of a special standard hand-held single-axle cart. The maximum rate of fire SAU "Peony" was 1,5 shot per minute. In this case, the following shooting modes were provided:

The additional armament of the SAU consisted of an RPG-7 anti-tank grenade launcher, MANPADS, F-1 grenades, 4's automatic rifles and a flare gun.
Hydropneumatic recoil devices were installed on the bottom and on the top of the barrel (hydraulic recoil spun brake with pneumatic knurling). The barrel recoil length was approximately 1400 mm. To absorb a sufficiently noticeable recoil force of the gun in the aft part of the body of the self-propelled chassis, a dozer opener type was installed, lowered by means of a hydraulic drive. The opener is sunk to the ground to a depth of approximately 700 mm and provides self-propelled gun mounts with good stability during firing. The blocking hydraulic shock absorbers of the suspension units of the support rollers, as well as special steering wheels of the tracked chassis, lowered with the help of a hydraulic drive, also contribute to increasing the stability of the automatic control system. 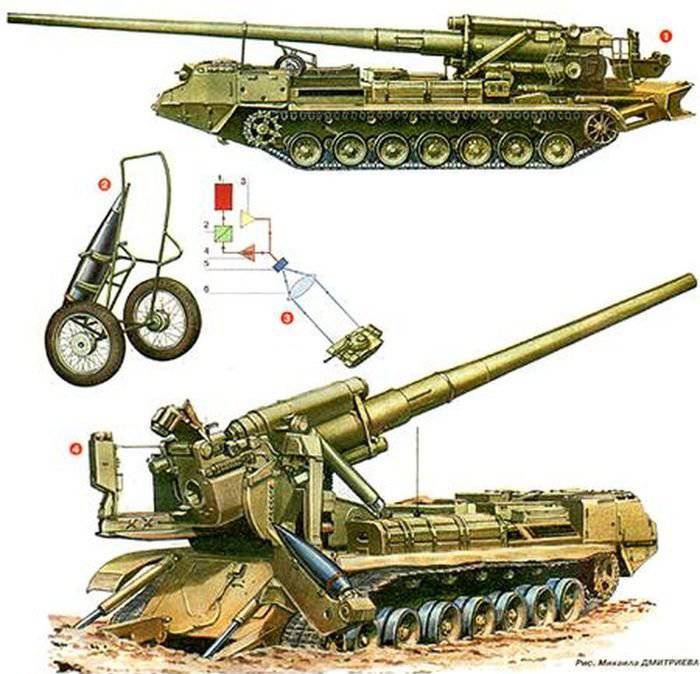 On the SAU 2C7 “Peony” was installed a twelve-cylinder V-shaped diesel B-46-1, equipped with a turbocharging system, the maximum diesel power - 750 hp In addition, in order to provide autonomous power supply to the installation, a diesel engine with a diesel engine with an 24 horsepower capacity was installed in the MTS. A manual transmission with onboard gearboxes and a bevel gearbox was borrowed from MBT T-72. Using the B-46-1 diesel engine allowed the 46-ton car to accelerate on the highway to a speed of 50 km / h.

On the undercarriage, 7 track rollers were installed on each side. Suspension rollers torsion bar, individual with lockable hydraulic shock absorbers. Drive wheels self-propelled were located in front. Many nodes in the chassis "Pion" were borrowed from the MBT T-80. 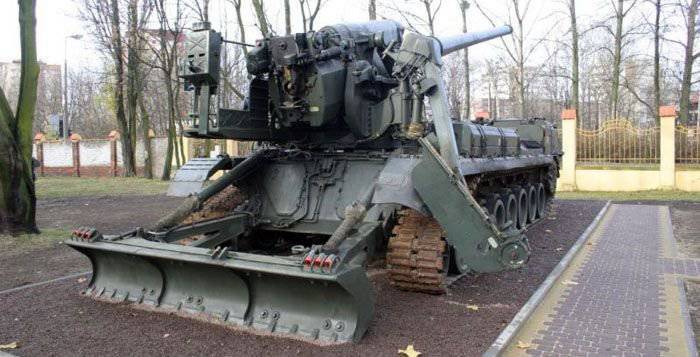 The upgraded version of the ACS under the symbol 2С7М “Malka” was also designed in KB №3 of the Kirov factory. In the chassis of the modernized self-propelled guns, higher-strength materials and rubber-coated elements were used. At Pion, a new fire control equipment has appeared that is capable of receiving data automatically. The remote loader was improved, the design of the charging stack was changed. Introduced new ammunition more power. The ammunition transported directly to the SPG was increased to 8 shots (from 4-x). On 2С7М a system of regulated control of continuous action was installed with automatic systems for diagnosing the state of the most important self-propelled gun-mounted subsystems. The modernization of the chassis "Pion" allowed the growth of the life of the motorcycle to 8-10 thousands of km.

Thanks to the improvement of the remote mechanism for loading the gun, this process became possible at any angle of vertical guidance. We managed to raise the rate of fire in 1,6 times - up to 2,4-2,5 shots per minute. The continuous firing time of the 2C7М is up to 3 hours. In the 2C7M ACS, a control option was provided through the control machine with automatic reception of the data necessary for firing through radio channel or wired communications with the display of the incoming data on the digital indicators of the commander and gunner's instruments. 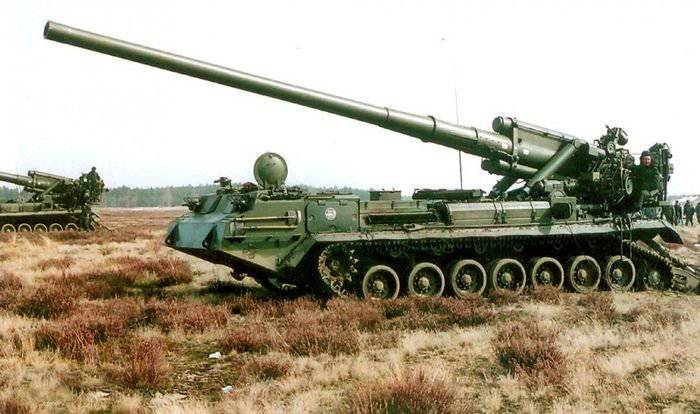 The choice between active-reactive and high-explosive fragmentation projectiles was made directly at the firing position, depending on the distance to the target. At the same time, high-explosive fragmentation and active-projectiles were projectiles of general use. Due to the enormous power of the 203-mm cannon, these ammunition can be used to destroy almost all types of objects, with the exception of highly in-depth / protected positions and fortifications.

For the destruction of such items used special concrete-shells. A projectile weighing from a centner and meeting speed with a target exceeding Mach 2 could destroy most of the fortifications, ensuring a fairly reliable defeat of the protected objects, which include command posts, ammunition depots, etc.

The use of nuclear ammunition was possible only with the appropriate orders of the higher command. In this case, the shells to the firing positions were to be delivered from special warehouses as part of a guarded convoy. Nuclear shells were designed to destroy very large infrastructure and industrial facilities, as well as large concentrations of enemy troops. The minimum range for firing nuclear ammunition was 18 km., And the maximum - 30 km.