February 4 2013
251
One of the most effective levers of pressure on the world economy and through it - on the economy of individual states, without a doubt, are energy perturbations. Over the past few years, foreign “partners” have heard with enviable regularity that there is only one state in the modern world that allows itself to exert energy pressure in order to benefit exclusively for itself. And this state is Russia. 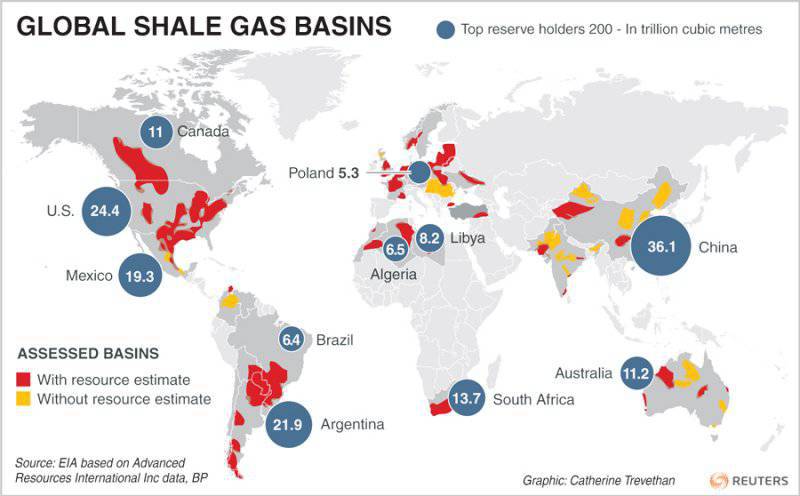 On the basis of this philosophy, it often turned out that any attempt to make a favorable adjustment of energy prices by Russian companies abroad was assessed as a new stage of the energy war, in which Moscow seemed to be the exclusive aggressor. In order for the “aggressor” to inflict a crushing and, of course, democratic blow, in the United States of America a strategy was developed aimed at reducing the dependence of the leading countries of the world on those energy carriers that over the past several decades have turned into irreplaceable ones. The strategy was based on the search for new sources of energy designed to reduce the role of classical natural gas and crude oil for the global economy. It would seem, why reduce, if the world has already managed to establish the processes of production, consumption and marketing? On this account, Washington gave the following answer: the United States is going to act as a guarantor of energy security in the future, because the same ordinary natural gas will end sooner or later. A very humanistic idea, and quite in the spirit of the United States - to save humanity from some kind of threat, which even not everyone suspected ...

However, any “humanistic” idea emanating from our big “friends” often hides a completely different goal. This time this goal is more than obvious: to deprive the leading energy player in the world market (Russia) of the possibility of extensive influence on the world market and, accordingly, in geopolitical terms. But in order to deprive Russia of this, it is clearly not enough to state that the head of the Russian Federation is an “anti-democratic regime”, and that Moscow has weapon mass destruction with shaking tubes and other potent on the fragile consciousness of the average Western person with dummy (like Iraq). It is not enough, because those very weak minds have already managed to get used to the words about “Russian totalitarianism” and even to the presence of nuclear warheads in the “totalitarian regime”. And if they got used to it, it was necessary to strike urgently, so to speak, from the other flank.

Here was born the idea that gas and oil are transient, but biofuels and shale gas, you know, eternal ... They say it's time to diversify the economy and give up what the world has got used to, otherwise everyone will have a cold and hungry future. Well, well ... The idea seemed interesting to many, and they began to develop it, especially with regard to shale gas, whose production with initially quite good indicators of volumes and profitability was immediately dubbed the shale revolution. Publications (mainly American, which is quite natural) began to appear with headlines in the spirit of the Soviet classics: “Way to shale gas!” Or “Shale gas is a guarantee of future energy security”. It only remained to make sure that the prices of ordinary natural gas went down, and those countries that were used to solve their energy problems through this raw material began to refuse Russian raw materials.

Initially, everything went perfectly for Washington. Devon Energy was the first in the world to drill a horizontal well for industrial production of shale gas after it was found that the United States has significant reserves of this raw material (24-25 trillion cubic meters, of which about 15% are recoverable).

Large-scale work on the extraction of shale gas in the United States was launched by Chesapeake Energy Corporation, which, as a legal entity, was born in the 1989 year. In just a few years of active mining of shale gas, the corporation has achieved solid success. At the same time, the cost of gas production was relatively low, and, it would seem, a little bit more - and the world will completely refuse to supply conventional natural gas, the main distributor of which is Russia.

Things reached the point that on the desktop the American president in 2008-2009 lay down the paper with such numbers, from which on his lips could only be born a contented smile. These figures showed that the United States reached the first place in the world in gas production (2009 year), and more than a third accounted for the production of, say, alternative types of blue fuel, which somehow proves the complete victory of the United States on the energy market ...

However, ever since the American president danced in the Oval Office for joys, it did not even take two years to pass, when experts suddenly announced that there was a “slight exaggeration” of the extraction volumes. These were experts close to the US authorities. Experts, however, slightly more from those remote authorities made their estimates of gas production in the United States, including shale gas, including the level of price changes for this type of fuel on the world market. And it turned out that the "registry" was not only there, but they were also very impressive. According to some data, they exaggerated gas production in the USA for all 11% ... That is, not quite so: they mined it as it was mined, except that the White House thought it was producing more by 11%. But they also say that Americans never adopt anything from overseas ... Only, you know, your own ... It turns out that they are very much adopting.

But postscripts with postscripts, namely these “official” data went a couple of years ago to be replicated around the world. What did it lead to? Gas prices went down. Washington dreamed about that, but then everything went a little differently, and immediately in several directions. At first, Russia, realizing that the decline in world gas prices could have a painful effect on the budget, simply decided to reduce production and export volumes. In particular, Gazprom recorded a decrease in gas production in 2012 by 6,6% compared to 2011 year.

In the Old World, this instantly caused an unhealthy excitement: some particularly impulsive EU citizens from among those in power began to shout at the top of their voices that Russia is becoming an unreliable supplier. They shouted and shouted, but they didn’t refuse to buy gas. After this move on the part of Russia, gas prices stabilized. In Europe today, on average, Russian gas is about $ 400-450 per 1000 cubic meters and something is not heard about refusals from its purchases ...

Another impartial moment for Washington came from the American environmentalists. It turned out that the technology that companies use to extract shale gas causes enormous damage to the environment. In particular, the essence of the issue rests on the so-called hydraulic fracturing. This technology, according to "green", leads to the fact that the water used for drinking and household needs, get a variety of impurities that can hardly be called useful: toluene, ethylbenzene, etc. To reduce the degree of heat around stories with the contamination of water and soil, the mining companies even invited the residents of the places where shale gas was produced by hydraulic fracturing to be shown on live broadcasts. Naturally, residents said that they felt just fine and did not find any benzene in water. However, the wheel was already spinning, and most of the same impressionable Americans believed the environmentalists and did not believe the invited “witnesses”, who were immediately dubbed false witnesses.

In addition to the above negative barriers for the USA, at least one more is highlighted. This barrier was identified by one more "friends" of the United States - the Chinese authorities. Beijing decided to conduct its independent assessment of the situation on the natural gas market and assess the prospects for importing shale gas from the United States, for example, to Europe. After analyzing the collected information, it turned out that shale gas cannot yet compete with ordinary gas that is transported through pipes. The reason is that even if the United States reaches such a level of shale gas production, at which its volumes will be sufficient for active export to the European Union, the cost of this raw material will be several times higher than the cost of "pipe". After all, shale gas will have to be liquefied in the United States, tankers will be filled with them, delivered across the Atlantic, liquefied in Europe. As a result, Chinese economists have concluded that shale gas is, of course, good, but in order for the system not only to produce it, but also relatively inexpensive delivery from the US to the same Europe, it will take more than a dozen years.

However, American and Western European companies decided not to deviate from their idea of ​​reducing the influence of Gazprom on the European gas market. One of the new moves for the global energy game system to continue its work is the Ukrainian move. Just recently, it became known that the British-Dutch energy giant Shell, as well as the American Exxon Mobile, decided to invest more than 6 billion dollars in the development of the so-called Ukrainian system of unconventional gas. It is reported that investments will be used to develop shale deposits in Yuzovskaya and Oleskaya areas. Yuzovskaya Square is located in the Donetsk and Kharkiv regions and has reserves of around 4 trillion cubic meters of gas. Oleska Square is located in Lviv and Ivano-Frankivsk regions. Exxon Mobile experts estimate its reserves at about 3 trillion. m3

That is, Western companies have decided to get close to the other side. Apparently, the Chinese calculations of gas transportation from the United States turned out to be correct ... Yes, and why increase the volume of shale gas production at home, risking anger for environmentalists, if you can conduct an experiment away from your territories ... Is there any benzene after this hydraulic fracturing? they say, now others are finding out ... The choice fell on Ukraine, in which they had already managed to declare that now Yanukovych would be able to produce gas that would be disadvantageous to Putin, and thus would forever enter the annals of history as a politician who would permanently lead Ukraine out of Russia energy dependence ...

Perhaps it was precisely this proposal that Viktor Yanukovych expected from the West, delaying (or rather, not starting it at all) the negotiation process on the possible entry of Ukraine into the Customs Union with Kazakhstan, Belarus and Russia.

In general, as can be seen, the energy struggle is only gaining momentum, and Moscow, if it is going to continue to exert a certain influence on the world market, should not look at this struggle through its fingers, but accept the challenge. Otherwise, only the information war on this battlefield will cause irreparable damage to the Russian economy. 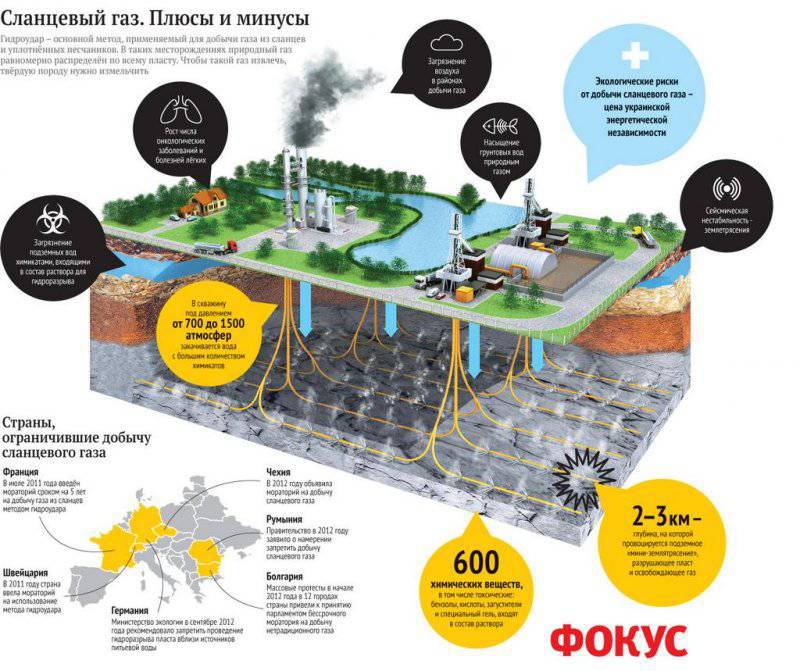 Ctrl Enter
Noticed oshЫbku Highlight text and press. Ctrl + Enter
We are
The past, present and future of the Russian energy strategy ("Stratfor", USA)Japan is going to shoot a "methane hydrate gun" to impress Russia
Military Reviewin Yandex News
Military Reviewin Google News
251 comment
Information
Dear reader, to leave comments on the publication, you must sign in.